Onboard with the Jubilee Sailing Trust

Simon Chubb sails on the Tenacious, one of the only two tall ships in the world specifically designed to take a mixed crew of disabled and able-bodied sailors

“Two-six-heave! Two-six-HEAVE!” yelled Alex, as the seven of us pulled like lunatics on the ropes running up the main mast to the three lower sails. Once the sails were set to the satisfaction of Ali, the mate, we strained to hold the ropes steady while others made them fast by looping them round the belay pins. Finally we could relax.

I was on the Tenacious, belonging to the Jubilee Sailing Trust and one of only two purpose-built tall ships in the world specifically designed to take a mixed crew of able and disabled bodies. It had taken pride of place in the Avenue of Sail for the 2012 Royal Flotilla on the River Thames to mark the Queen’s Diamond Jubilee. Today, we were on board for a day sail around Portsmouth.

The day had started with bacon sandwiches and tea as we waited for everyone to arrive, followed by a safety briefing and then leaving dock under engine. We were a mixed bunch, from people celebrating birthdays, to wheelchair users using the one-day cruise as a reassuring way of checking wheelchairs fitted through doorways and passageways before trying a longer trip.

There was a whole range of disabilities present, from polio-weakened legs to paraplegics. Everyone is encouraged to join in the running of the ship, and sailing ships lend themselves to this; just as ropes on one side are being hauled in, so ropes on the other side are being let out. And then there are the ropes to loop neatly round belay pins out of the way. 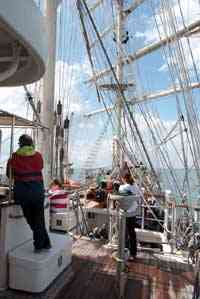 Having left dock, there was time for those who wanted to climb the rigging to the first platform around 50ft above the main deck. As we shrugged on our harnesses under the careful scrutiny of Ali and senior crew, there was much nervous camaraderie. 50ft might not sound very much, but when you step out onto the side board of the ship with the water moving swiftly past and then climb the outside of the shrouds before being able to hook on with your harness and then up the overhanging Jacobs ladder onto the platform – it seems higher.

The Tenacious has three masts, from front to back – foremast, main and mizzen. Both the fore and main masts have five sets of sails. Starting with the coarse sail at the bottom, there are then lower and upper topsails, t’gallant and royal sails.

The two lower sets of sails are all traditional sails with footropes to clamber along when letting the sails loose from their gaskets – straight out of C.S. Forester’s Hornblower books. The top three sails use furling sails and are effectively big roller-blinds that can be operated solely from deck. From start to finish it takes around 40 minutes to set all the sails on the Tenacious.

Once up to the tops, we stood there admiring the view around the Portsmouth Channel and the rest of the ship, with a gentle breeze and sun shining. It was with a real sense of achievement that we then descended again to well earned tea and cake. The unofficial motto of the Jubilee Sailing Trust is “if you’re not hauling rope, you’re eating cake”. Although not possible on the day sails, on the longer trips, it is possible to get wheelchairs up the masts through a combination of a specially made frame and a few ropes and willing helpers.

Both the Tenacious and the Lord Nelson, the Jubilee Sailing Trust’s other ship, fully cater for a range of physical abilities. Everyone is buddied up on a voyage, with more dependent people being assigned two buddies. The Tenacious has eight “cabins” suitable for wheelchairs with bunk beds, room for the wheelchair and a hoist if necessary. The buddy sleeps on a bunk bed above. There are two wet rooms with sit-down showers, toilets and adjustable-height sinks. There are separate facilities for those more able to stand.

The rest of the accommodation is in bunk beds, with the top bunk hinging up to allow easier access to the lower bunk.

There is a qualified Medical Purser on board able to deal with most medical conditions but check when you book as there are certain conditions that the Jubilee Sailing Trust needs to be aware of. 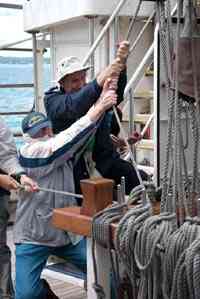 Up on deck, everyone is able to take a turn at the wheel under the watchful eye of the pilot and I got to talk to Kieran and his day-carer, Andy. Kieran is in a wheelchair and needs 24-hour care. It was actually Andy that found out about the day sail and “sold” Kieran on the idea.

It wasn’t a hard sell.

Kieran’s never had the opportunity to try something like this before and absolutely loved it. In fact, so keen is he that they both had a look round the accommodation and other facilities to make sure that Kieran’s wheelchair and other needs would fit in on a longer trip.

The call went round for people to help set the sail holding yards so I find myself on a rope next to Alex again. We heaved like mad as those less able to heave let out rope on the other side. Alex, the current CEO of the Jubilee Sailing Trust, is above rolling up his sleeves and tailing on to the end of a rope.

Both the Tenacious and the Lord Nelson spend most of their time at sea, taking people of all abilities on a range of sailing trips.These range from the one-day sailing trip I took, to week-long trips to Bruges or slightly longer ones to the Mediterranean and beyond.

To mark the 200th anniversary of the Battle of Trafalgar, the Jubilee Sailing Trust  is preparing to leave the UK in October 2012 to circumnavigate the globe on the Lord Nelson. At the time of writing, places were available for some of the legs.