Bumping into big cats on a walking safari in Zambia

Rather than ticking off the big five from the safety of a jeep, a walking safari gets you up close with everything from leopards to hippos. Lyn Hughes reports from Zambia

"Lion! Two of them!" Bryan grabbed my arm and pulled me down the bank. He had spotted the tawny backsides of two young male lions, darting off from the shade of a tree as they heard us approach.

We headed in the direction they had taken along a dried-up river bed. Paul, the armed scout, and guide Bryan Jackson searched the gully and banks for tracks but were baffled. Eventually, Bryan suggested that we head up the left side. At the top was a narrow track running through some elephant grass that was almost as tall as us. "Don't forget, if a lion does charge, stand still and don't run," he whispered. My heart pounded as we set off down the track, I consoled myself with the fact that Bryan had been in South Luangwa for 15 years and had never been charged.

After a few steps, we heard some loud rustling. The lion were just feet from us, but ran off through the grass. We cautiously carried on down the track and out into a clearing, only to find our way blocked by three elephants; a mother and two offspring. We skirted back to the river bank, as far away from them as we could, until it was safe to cut back through the long grass again.

The adrenalin was still pumping through us as we came out into a large open area, scattered with antelope, zebra and elephant. "Time for a cup of tea, I think," said Bryan. We settled ourselves on a log, as our tea-bearer Moffat made a fire and smoothed out a tablecloth on the dry grass, meticulously laying it with cups, sugar and milk. Meanwhile, Bryan had his binoculars to his eyes and was slowly scouring the area. "I think there may be a leopard up there," he said quietly, pointing at a winter thorn tree. "Let's take a look."

Tea was forgotten as we jumped up and walked swiftly towards the tree, where a dead puku was visible hanging on a branch. A movement caught our eye and a large male leopard descended the trunk and ran into some grass nearby. We stood still, training our binoculars on the grass, and spotted the huge cat staring at us impassively. When it realised that we had seen it, it slowly slunk away, merging in with the dappled grass.

I was two days into a walking safari in the north-east of Zambia's South Luangwa National Park. I'd spent a few days at Tafika Camp, situated just outside the park on the banks of the Luangwa river, and had enjoyed a mix of game drives, microlighting and short walks, as well as a visit to the local school that is supported by the camp. However, it was a four-night walking safari that I was itching to do.

Having crossed the Luangwa by canoe, we were inside the park and were now feeling the exhilaration of being in an area with no roads, no vehicles and no people. We spent a couple of nights at each of two bush camps, the Crocodile and the Chikoko. "Camp" isn't really the right word - we stayed in comfortable chalets made of local materials that are pulled down at the end of each season. Also, solar power meant that a cold beer or glass of wine could always be guaranteed, and after seven hours or more of walking each day, we felt that we deserved a beverage or two.

The joy of a walking safari is that you use all five senses. Our ears would prick up at the slightest rustle, while the warning call of a baboon or puku would make us tingle in anticipation - the sound usually denoted a big-cat spotting. We sniffed the seeds of wild basil that smelt remarkably like Vicks VapoRub, and tasted the sweet kernel of the seed of a mchenja tree, a food that is much sought-after by humans, elephants, monkeys and birds alike. 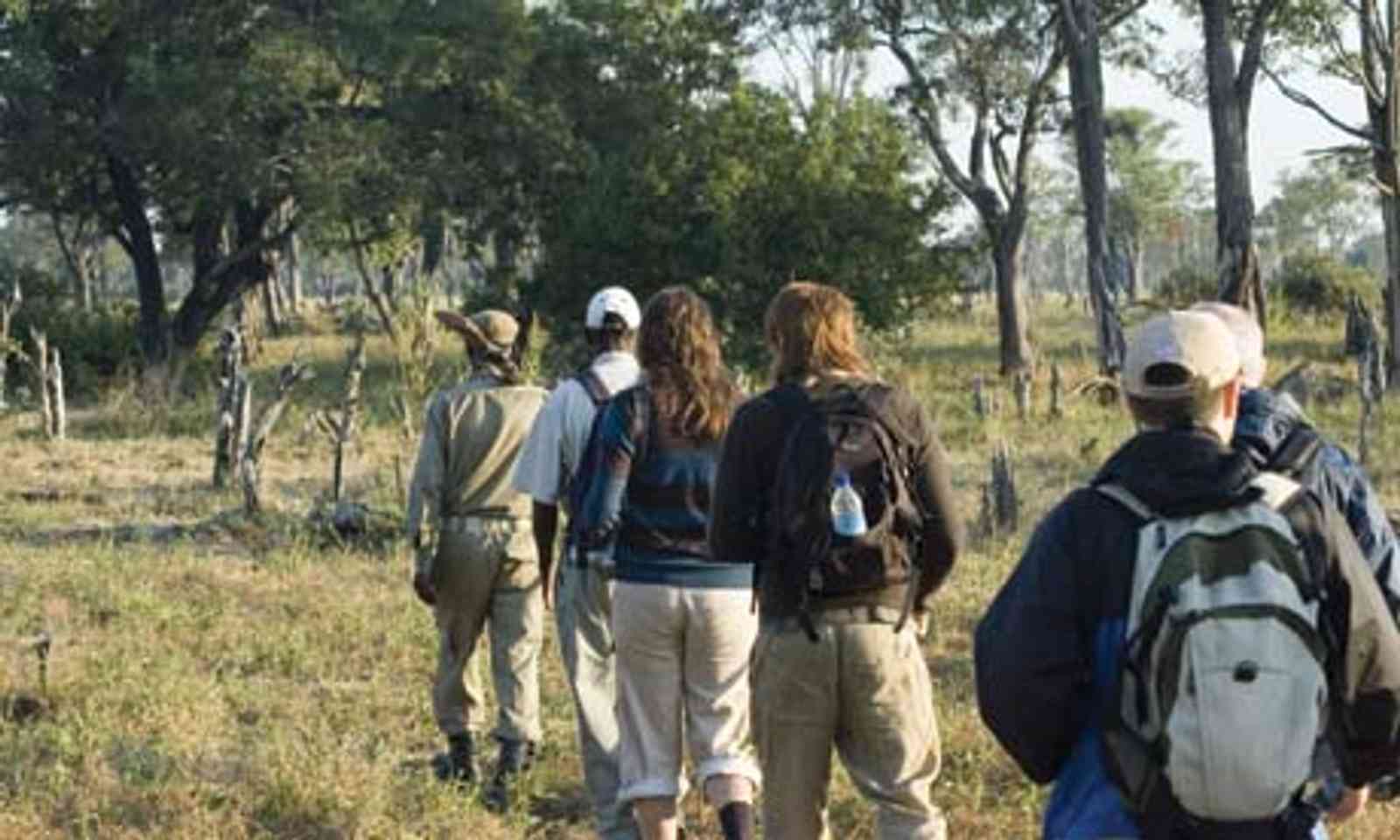 We constantly stopped to study tracks or animal droppings. Studying the latter seems to be a feature of any walking safari, and this was no exception. Bryan would test us to see if we'd been paying attention, and could distinguish our impala droppings from our puku, our hippo from our elephant. "What's this one, then?" "Civet." "Yes! How do we know that?" "Because it eats anything - fruit, eggs, meat, whatever."

Walking also gets you away from the obsession of just ticking off the big game, as you learn to appreciate the whole environment, including the plants, bugs and little critters. While Bryan loved leopards, he admitted that his favourite animal was the elephant shrew, a long-nosed mammal that scientists decided isn't a shrew at all. "They're cute little fellows. And they're clever and brave. One used to come out and drum its feet whenever it saw me," he said. We got used to looking for the telltale clearings in the undergrowth that denoted their "helicopter pads", as Bryan called them. If a predator was around, they would leap from clearing to clearing, with not a sound to give them away.

Every walk was different, with its own highlights, whether it was looking in astonishment at the five-square-foot nest of a hammerkop, a bird that looks like it's wearing an aerodynamic cycling helmet, or coming across a 700-strong herd of buffalo.

Perhaps the most surprising of the animals was the hippo. Having startled a hippo early one morning, we marvelled at its grace as it ran away from us to the river. "It looks like an overweight fairy," laughed Bryan. Seeing it vanish over the edge of a bank with a near 90-degree drop, I couldn't understand how an animal that looked far from agile didn't somersault over. But seconds later it was submerged in water, staring balefully back up at us.

After four extraordinary days the time came for our final walk. "What would you like to see?" asked Bryan. "Hippos," said Cathy, "and a leopard for Lyn." It was an overcast, sultry afternoon, with little birdsong and few sightings of wildlife. We reached the river and looked down expectantly, but this was the dry season and the water had dried to a trickle. Where a couple of days previously there had been a mass of tightly packed hippos, there was now not one to be seen.

We followed the river for a while, but even the birds seemed to have deserted us. "We need to turn back to camp now," said Bryan, and, feeling somewhat dejected, we reluctantly took a trail that led away from the river through elephant grass. The wind had picked up and blown the clouds away so that the sun could finally put in an appearance. Although it was already descending towards the horizon, it lifted our spirits. Suddenly, Paul and Bryan stopped in the silent, urgent fashion that we had come to recognise meant that something significant was ahead. Bryan moved a little to the side away from me, allowing a view of the track ahead. There, on its side of the path, was a magnificent male leopard enjoying the last rays of sunshine, completely oblivious to our presence.

I slowly crouched to allow the others to see it, too. For several minutes we remained motionless, and time really did seem to stand still. The leopard licked itself, and rolled around in the dust. Suddenly, he spotted us and jumped up, startled. For one glorious moment he turned his face towards us, his eyes burning into us. Then, with a flick of his tail, he was gone.

Lyn Hughes travelled with Wildlife Worldwide as a guest of Remote Africa Safaris.