Okinawa: Off the beaten track in Japan's subtropical islands

This is Japan but not as you know it; nature lovers and adventurers will love these exotic islands with coral reefs, white-sand beaches, wildlife-rich jungle, and traditional cultures...

Pulling away from mainland Japan, drifting towards the Philippines, lies a string of lush islands that few travellers to Japan ever reach. The Okinawa Islands are slung across the East China Sea, an exotic chain of subtropical isles fringed with coral atolls and thick with jungle – a sprawling natural adventure park that’s well off the usual travel routes.

In fact, while diving its waters looking at sensational sealife, cycling its trails through traditional villages or treading its lush interior, you’ll often scarcely believe you’re still in Japan. Further exploration reveals that the islands are steeped in an ancient culture, thanks to its history as the former Ryukyu Kingdom. Together it’s a truly unique corner of the nation that’s still imbued with the air of mystery and adventure, and – better yet – is yet to be discovered by the masses. 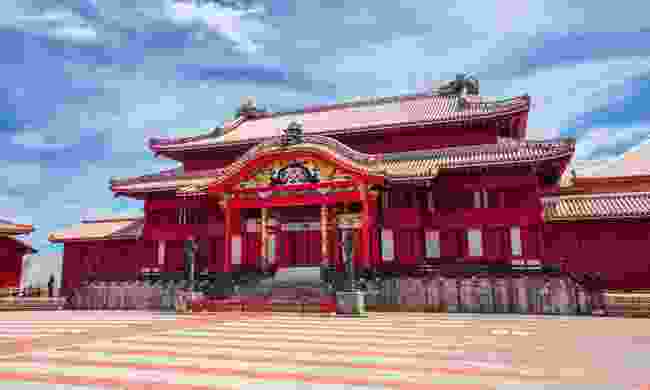 The eponymous main island is the main entry point for those arriving by air or sea, with Okinawa’s capital Naha humming with traders (try Heiwa-dori street) and typical Japanese neon buzz. But those seeking more cultural and natural splendours will find it within easy distance.

Head 6km east to explore Shuri, the former royal capital during the reign of the Ryukyuans (1429-1879). Shrines, temples and forts stud its streets, with none more important than the UNESCO-listed Shuri Castle, the throne for many a Ryukyuan king. After its post-Second World War reconstruction, the castle’s ceremonial gate and state halls now stand as the island’s icons. Leave the castle by the 500-year-old Kinjo road. A former route for royals, soldiers and envoys travelling to the castle, though it only runs for 300m, it still gives fine views of red-tiled neighbourhoods and immaculate gardens.

Found on the island’s south-eastern corner, Seifa-utaki is Okinawa’s holiest site; a shrine where for centuries only female Ryukyuans were allowed to worship. Its caves and rocky ledges serve up views of Kudaka Island – for both genders.

But Okinawa’s spoiled with wild wonders, too. Chief among them is Yanbaru National Park, whose lush subtropical forest occupies most of the island’s northern tip and is a haven for outdoors lovers. Visitors walking and cycling past the tall trees, limestone karsts, turquoise pools, craggy coastlines and waterfalls might spy endemic woodpecker and kuina [rail bird] – or for an extra thrill, take a night tour. It’ll be quickly clear why the area’s been earmarked for UNESCO recognition.

For more natural adventures, paths and boardwalks forge deep into Gyokusendo Cave, one of Japan’s largest stalactite grottoes, while the coast is rich in natural drama. Busena Marine Park gives you a futuristic front-row glimpse of tropical fish flitting in and out of the cayes with an underwater observation deck. Meanwhile, two-wheeled travellers can find more joy on Ie Island, a 30 minute ferry off Okinawa’s western coast. Cycle trails web its cliffs and fields of sugarcane and pineapple – try the lily season in April-May for an extra fragrant sensory experience. 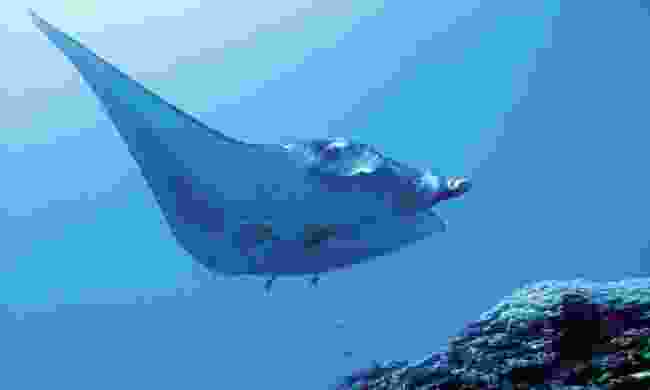 A manta ray swims in the ocean depths (Visit Okinawa)

But the islands also reward those who venture further afield. The Yaeyama Islands are closer to Taiwan than Japan’s main islands. As you head south-west, the main hub of Ishigaki will be your first port of call, boasting flour-white sands, palmfringed beaches and azure waters – a tropical far cry from the neon lights of Tokyo or steaming onsen of Hokkaido. Naturally, snorkelling is plentiful here, with clusters of irabucha parrotfish, clown fish and moray eels zipping through its coral, with Shiraho Reef home to the world’s largest expanse of blue coral.

Kabira Bay is the island’s postcard vista, with glass-bottomed boats offering a drier view of Ishigaki’s reefs and manta rays. But for those who want to navigate the interior, there’s opportunities for a guided-kayak around the mangrove-lined Miyara River or Fukido River, or exploring the trails around the Yonehara Palm Tree Groves – or take in a fine view of the whole island with the short trek up Tamatorizaki Observation Point. 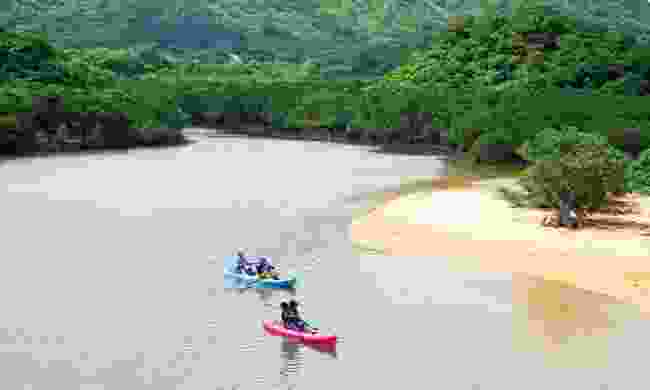 From Ishigaki, several other equally beachblessed Yaeyama Islands are an easy ferry hop away. At Taketomi’s centre is a finely-preserved traditional village of one-storied houses covered with red tiled roofs, and plenty of shisa statues – lion-like gargoyles that ward off evil spirits. The island’s diminutive size means that it’s easy to hit the sandy paths with a bicycle; meanwhile beaches such as the pristine Kondoi offer swimming and snorkelling opportunities, while Star Sand Beach lives up to its name: Taketomi is said to be one of only two islands in Japan where you can find this star-shaped sand – actually the shells of tiny crustaceans.

The other of these beaches is on nearby Iriomote Island, which also is home to one of Japan’s greatest wildernesses. With 90% of the island swathed in jungle and mangrove swamps, Iriomote is an adventure traveller’s paradise. The Urauchi River is the longest in Okinawa, and kayaking along it offers an intimate, exhilarating view of the dense, mangroved jungle and access to the waterfalls that punctuate it: the Kanpiree, Mariudo, Kaashiku Falls and the 55m Pinaisara Falls – the latter being the tallest in Okinawa, and offering a view that’s well worth the trek to its peak.

Iriomote is a delight – and surprisingly easy – to hike, too. Trails through the north’s verdant rainforest may reveal highlights like the Kuura Limestone Caves and Yutsun Falls; or if you’re really lucky, bring you nose-to-nose with the island’s elusive Iriomote cat (there’s said to be only 100 left in the wild).

Delving further into the Yaeyama Islands, Kohama is laced with walking trails that lead visitors up to spectacular views; while Kuroshima’s sands are a nesting ground for loggerhead and green sea turtles, which outnumber the population that occupy traditional clay-tiled dwellings – try the yashigani soba (coconut crab noodles) while you’re there. 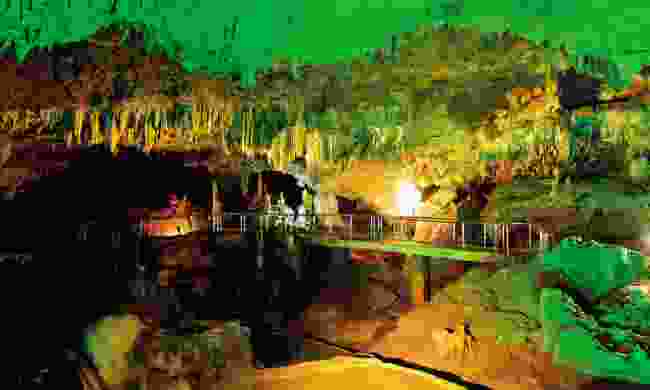 Limestone cave (Studio by the SEA)

The Okinawa archipelago is made up of 160 islands, so naturally there are plenty of further delights to be discovered. Kume Island is a volcanic world with sugarcane and pineapple plantations, pocked with traditional villages still practising handicrafts. A trip across the bridge to the Ou Island is well worth a venture for its mosaic of 1,000 pentagonal stones, resembling a flattened tortoise shell.

A plane hop away from the mainland, the Miyako Islands have a dialect and culture that sets it apart, even by the standards of the rest of Okinawa. Its central titular isle combines artisan crafts with fine beaches primed for snorkelling, while walking trails vein the sprawling Hirara Tropical Botanical Gardens. Bridges connect the island with Ikema, famed for its central wetlands and Yaebishi Reef that emerges at low tide, and Irabu, perfect for a flop on one its many beaches.

The Okinawa archipelago has everything that makes The Land of the Rising Sun such an essential destination – adventure, nature, wildlife, culture, history, even the iconic cherry blossom season – but, with subtropical areas ripe for exploring, it’s got even more added value. In fact the only thing Okinawa doesn’t have is the extra people. So discover Japan’s travel-treasure islands… before the crowds do.