Botswana’s Okavango is perhaps Africa’s most aspirational safari destination. But with its 15,000 sq km of sinuous wetlands and raft of remote lodges, where do you start?

Reaching like a green-fingered hand into the Kalahari, the Okavango Delta is a mixture of wet and dry. Habitats range from permanent lagoons and papyrus swamps to seasonal floodplains and wooded islands. By combining two or three camps in a single visit, you’ll not only experience more of the delta’s rich palette of landscapes, but you’ll also see a greater variety of wildlife and have more things to do.

Broadly speaking, ‘dry camps’ offer game drives year-round, with a good chance of seeing large mammals such as buffalo, elephant, rhino, zebra and lion. By contrast, ‘wet camps’ – with access to water even after the annual floods have receded – focus on boat trips by mokoro. Being punted along in these traditional wooden dugouts is a great way to spot small wonders such as the jewel-like malachite kingfisher and painted reed frog. There are also ‘mixed camps’ that have varying degrees of wet and dry depending on when you visit (floodwaters peak between June and August). 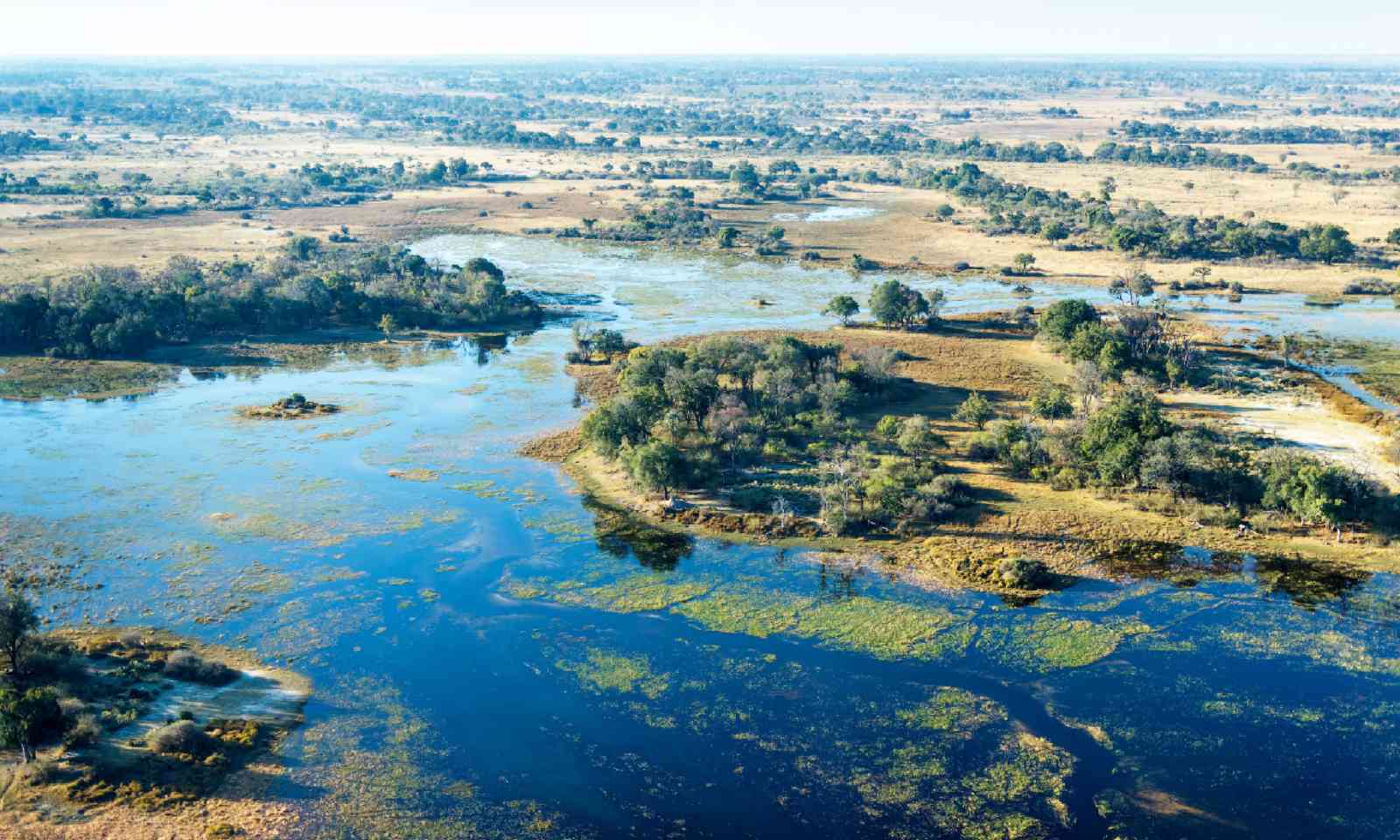 Lying at the heart of the Okavango, Moremi Game Reserve has a bit of everything. One of its most rewarding areas is the Khwai River floodplain where you might be lucky enough to see leopard and wild dog. Located here, Khwai Tented Camp and Machaba Camp are typical of the Okavango’s intimate camps, with just 14 en-suite tents between them.

Surrounding Moremi Game Reserve, a patchwork of private reserves offer small, exclusive camps and more flexible rules – you can go off-road and embellish safaris with night drives, walks and horse-riding. Lavish Abu Camp even offers elephant safaris, if you’re grabbed by the idea of walking and riding through the bush with a family of previously captive elephants that has been returned to the wild. Other luxury options include the spectacular Sandibe Okavango Safari Lodge, an architectural masterpiece oozing sustainable technology, which reopened in September 2014 following a complete redesign.

Most travellers opt for a fly-in safari to one of the Okavango’s permanent camps or lodges – it’s quick and easy, allowing you to minimise hours spent travelling and maximise time on safari, not to mention giving you an aerial perspective of the delta’s sinuous waterways and a vulture’s eye view of big game.

Mobile safaris, on the other hand, are more reminiscent of the overland expeditions undertaken by early explorers. Driven by 4WD deep into the African bush, you’ll reach parts of the delta far from permanent lodges and stay in camps that have been located to make the most of seasonal conditions and wildlife movements.

At the top end of the scale, the camps are set up for you on arrival and don’t skimp on creature comforts. Real beds, feather duvets, Persian rugs, hot showers, silver cutlery and full English cooked breakfasts are just some of the refinements you’ll find on the five- and seven-day mobile safaris offered by The Uncharted Africa Safari Co. Travelling from Maun into the Moremi Game Reserve, these small-group adventures link two or three tented camps and include a night at a more basic fly-camp, sleeping under mosquito netting on a remote island in the delta. 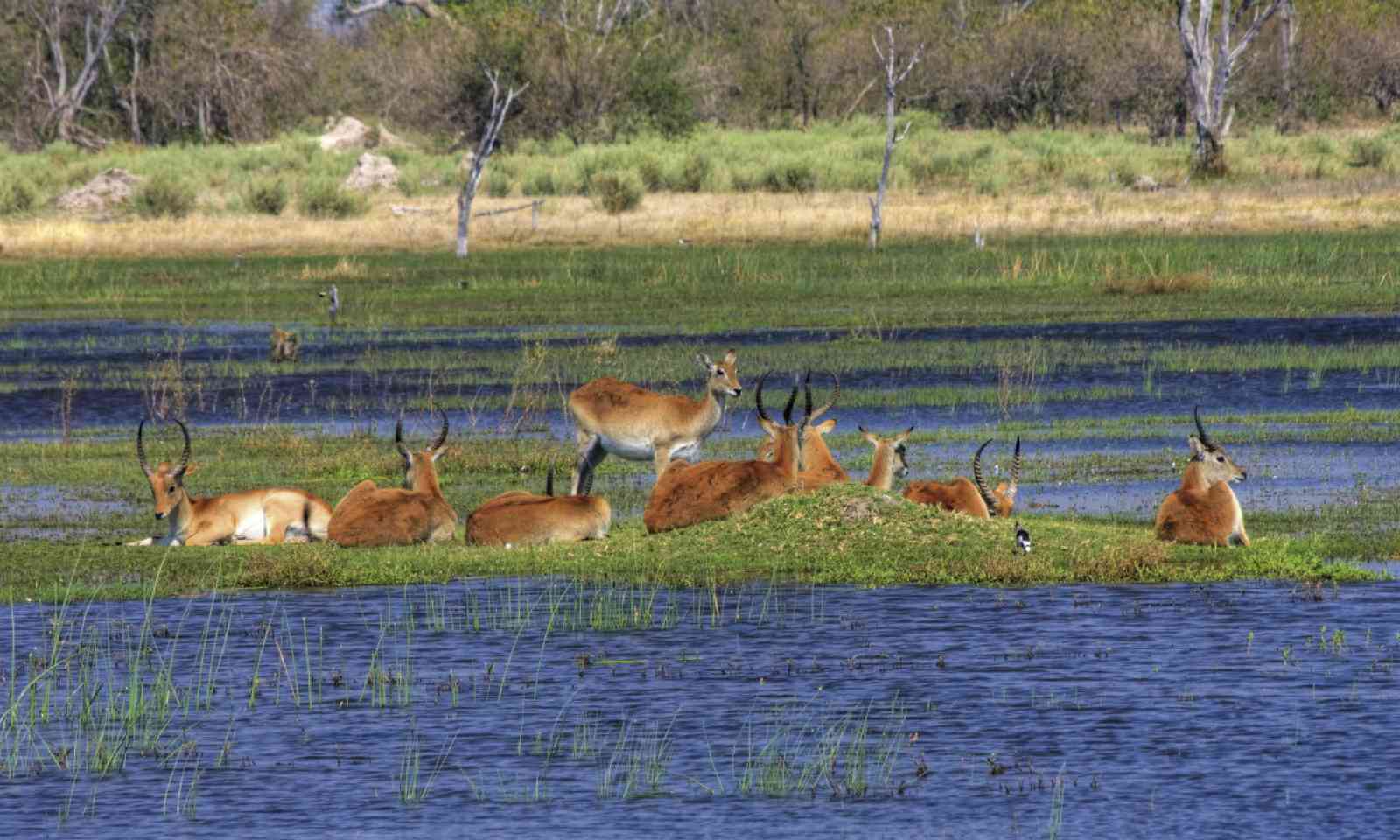 Budget mobile safaris in the Okavango are more hands-on. You’ll pitch modest-sized dome tents, sleep on bedrolls and help prepare meals – although most operators provide a cook and camp staff as well as a professional guide. The Old Bridge Backpackers offers a choice of catered and self-catered mobile safaris tailormade to suit your budget and requirements.

Popular spots for camping in Moremi Game Reserve include the Khwai River and Xakanaxa Lagoon. Mobile safaris also regularly pitch up at the forested area around Moremi’s South Gate, as well as Third Bridge near Mboma Island, where it’s possible to take boat trips into the delta. Indeed, one of the best ways to explore parts of the Okavango on a mobile safari is to travel by mokoro.

Exploring the vast, stretching water trails of the Okavango in one of its ubiquitous mokoros (dugout canoes) is not only a slow, stealthy and immensely satisfying way to search for wildlife, but it also puts you in touch with the culture of the delta’s indigenous San people. The Bugakhwe and Xanekwe Bushmen have traditionally navigated the delta’s maze of reed-fringed channels, poling narrow dugout canoes on fishing, hunting and plant-gathering trips.

A mokoro typically has room for two seated adults. Gliding along, inches above the water’s surface, you gain a unique perspective of the Okavango – peering into the bright chalices of water lilies, ducking through lush plumes of papyrus or marvelling at the vast scale of the delta as you cross an open lagoon. 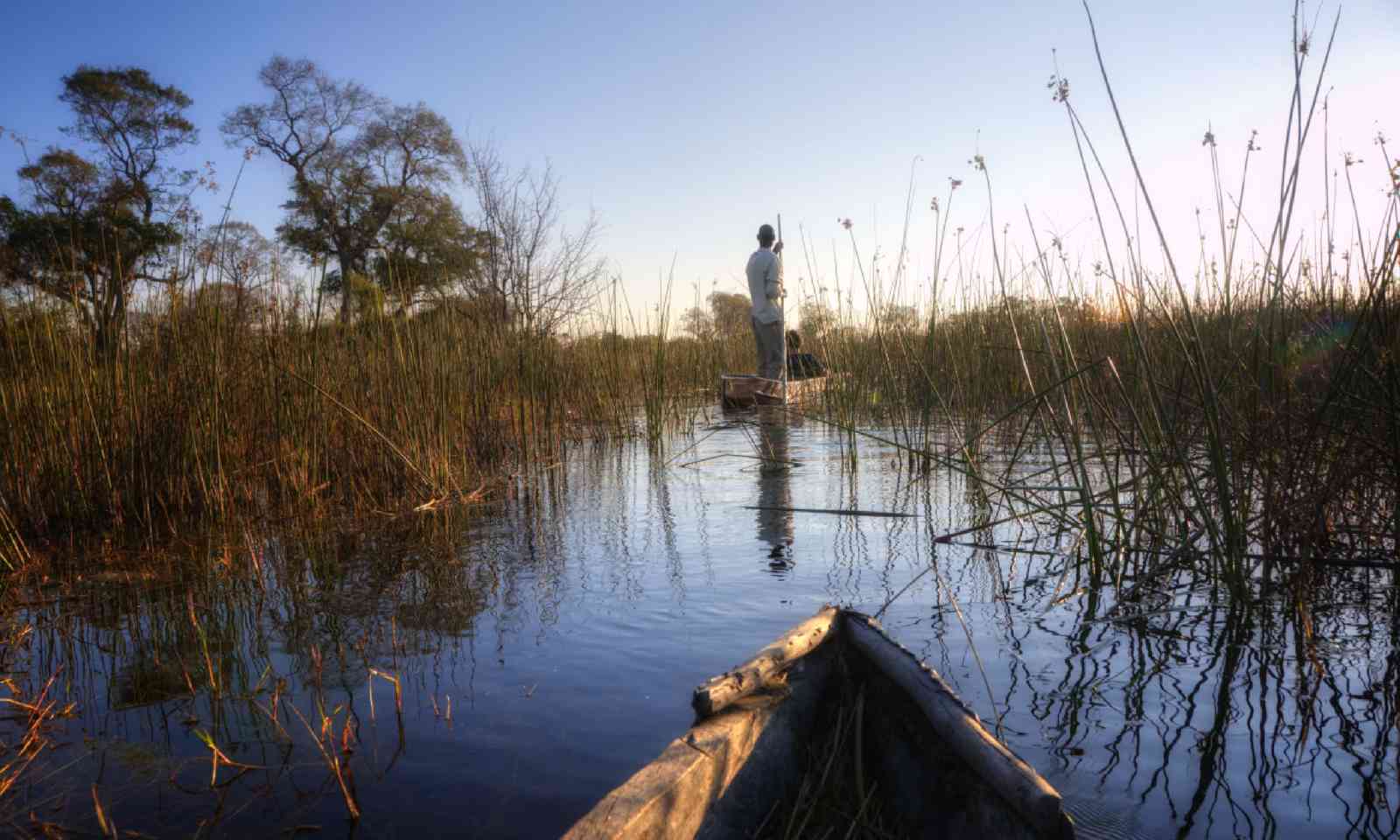 With no engine noise, mokoro safaris are ideal for birdwatching; you may also spot other often-overlooked creatures, particularly amphibians and insects. Slipping silently past big game – elephants drinking at the water’s edge or a herd of lechwe splashing through the shallows – will also hold you rapt. At Kanana Camp in the south-western delta, mokoros have been given a modern update, with glass bottoms that allow you to peek at what lies beneath the surface.

Numerous camps offer mokoro excursions, spending a morning or afternoon exploring local waterways. In the Moremi Game Reserve, Camp Moremi, Okuti and Xakanaxa Camp all offer canoe trips. Among the private reserves, Eagle Island offers a cocktail of waterways, from the Boro River to large floodplains and lagoons. Located in the north of the delta, Duba Plains Reserve receives floodwaters as early as April, making it another good place to explore by mokoro. Kwara, Mapula, Vumbura and Xigera reserves all have a mixture of wet and dry habitats, with plenty of opportunities to get afloat.

Setting out on foot in the Okavango, accompanied by a professional guide and armed scout, is a safari of the senses: you can feel the crunch of sunbaked Kalahari sand beneath your boots and smell the heady aroma of wild herbs as you wade through dry grassland. No sound goes unnoticed – from the distant whoop of a hyena to the disgruntled snorts of skittish impala. Crouching next to the graffiti of tracks on a game trail, your guide will reveal the meanderings of pythons and stomping of elephants. And, with luck, you may even time your walk to coincide with the arrival of floodwaters.

Although not as popular as game drives or mokoro safaris, guided walks can be arranged at several camps in the Okavango. Walking is not permitted, however, in Moremi Game Reserve or Chief’s Island. Instead, head for private reserves that place an emphasis on dry-land activities. In the Khwai concession, for example, wildlife-rich floodplains and mopane woodland near Banoka Bush Camp promise excellent game walking. Another camp operated by Wilderness Safaris, but located on the western side of the delta, Seba Camp overlooks a small lagoon in Abu Reserve and also runs walking safaris. 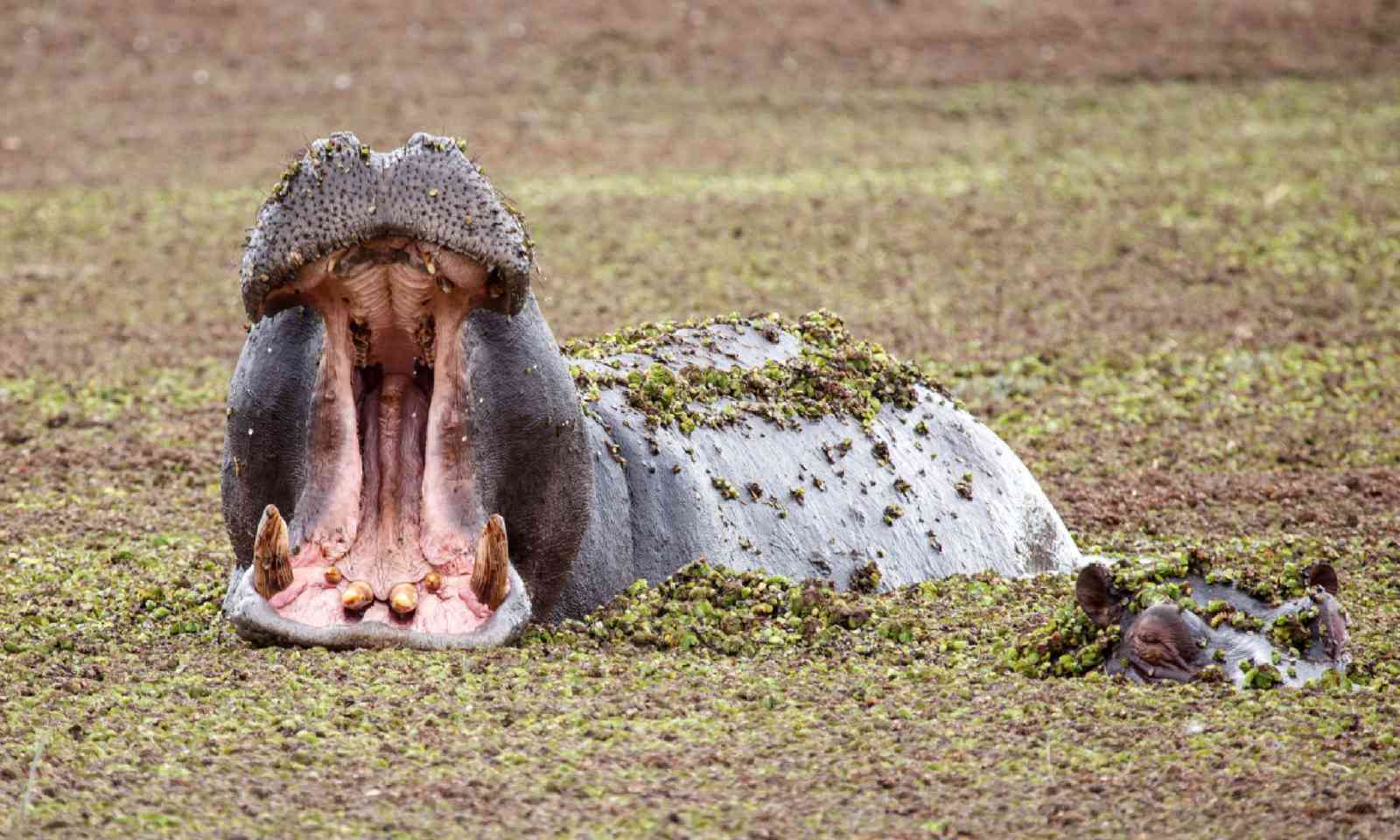 For the ultimate walking experience in the Okavango, however, Ker & Downey offers a four-day ‘Footsteps across the Delta’ safari in Shinde Reserve. Accommodation is in spacious, twin-bedded tents with en-suite flush toilets and hot-water bucket showers. Your chef rustles up culinary masterpieces from the bush kitchen, and there’s even a daily laundry service. But as comfortable and eccentric as this sounds, the main emphasis – and undoubted thrill – of these safaris is to walk out into the wilderness each morning, searching for wildlife and honing your tracking skills.

Although families should check minimum age requirements for children at some camps, most activities in the Okavango Delta are suitable for anyone with a sense of adventure. Saddling up for a horse-riding safari, on the other hand, is not as simple or straightforward as lowering yourself into a mokoro or lacing up your boots for a walk. Only confident, experienced riders should consider a horseback safari. Spending between four and six hours a day in the saddle, you need to be capable of riding at all paces, posting a trot for at least ten minutes at a time, controlling your horse at a canter and galloping out of trouble.

That said, there’s no denying the sheer exhilaration of spurring an Arab thoroughbred through the sparkling floodplains of the Okavango, galloping alongside lechwe, giraffe and zebra. You will almost feel part of the herd as you splash through lagoons, mingling with elephants or pausing to watch the setting sun lay an amber path across the watery wilderness. 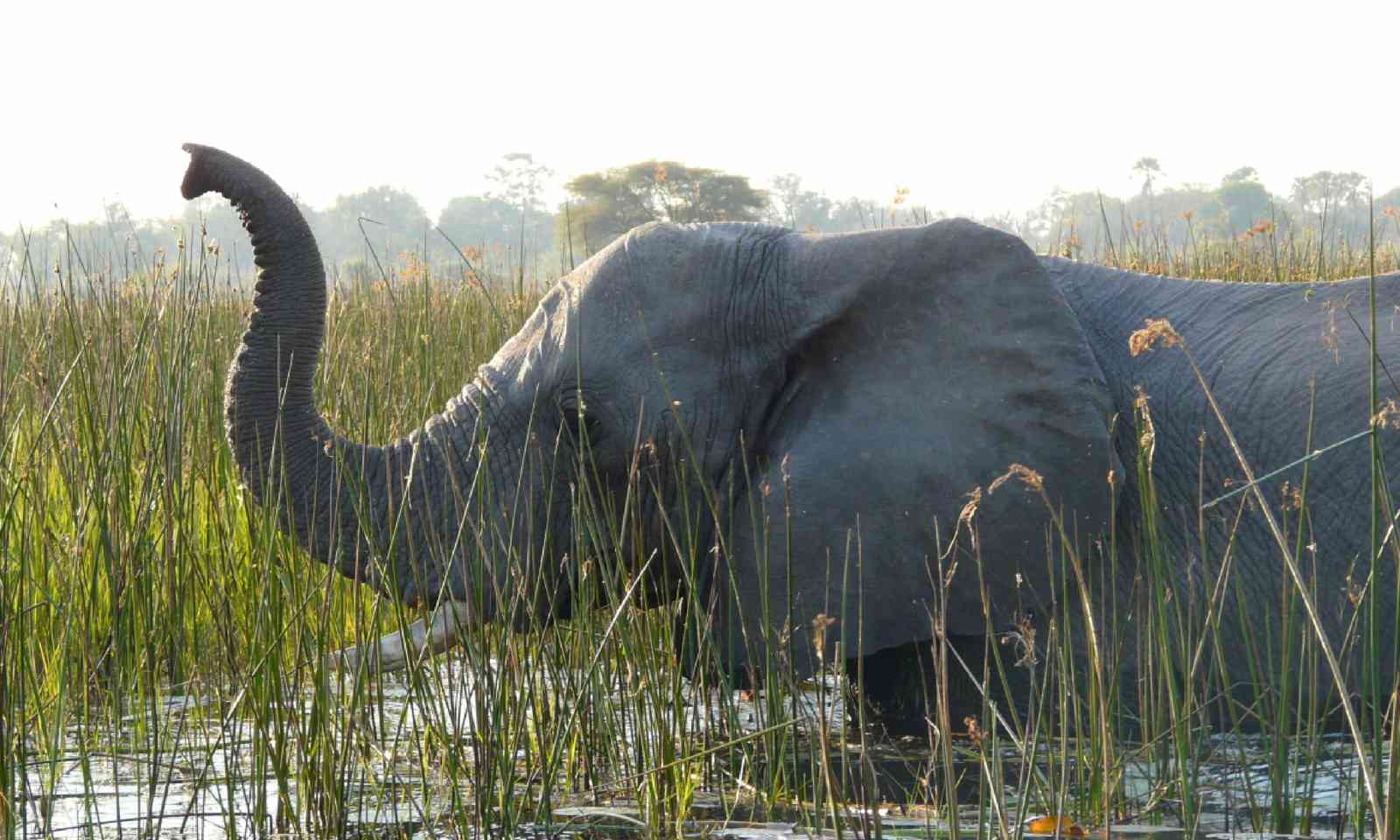 African Horseback Safaris is based at Macatoo Camp on the western side of the Okavango Delta. A typical safari features daily rides as well as opportunities for game drives (day and night), bush walks, mokoro rides and overnight stays in a treehouse.

Okavango Horse Safaris has three camps in the delta. With six large en-suite tents strung along the Xudum River to the south-west of Chief’s Island, Kujwana Camp serves as a permanent base for PJ and Barney Bestelink’s string of 60-plus horses. Further north, Moklowane Camp overlooks plains that are often flooded three weeks before Kujwana, while a mobile fly-camp operates to the south-east.