Greece has over 6,000 islands, scattered across the Aegean and Ionian Seas, so why go for the obvious ones? You'll still find gorgeous beaches and raucous tavernas, just without the crowds... Strategically located between the Greek mainland and Crete, Kythira has long been a crossroads of merchants, sailors, and conquerors. Hora, the hillside capital, is topped by a Venetian castle, reached following white-washed lanes, and the interior is filled with dramatic gorges and waterfalls.

The island boasts over 30 beaches, none of which are overly crowded. Said to be the birthplace of the goddess, Aphrodite, Kythira is bound to capture you with its beauty. 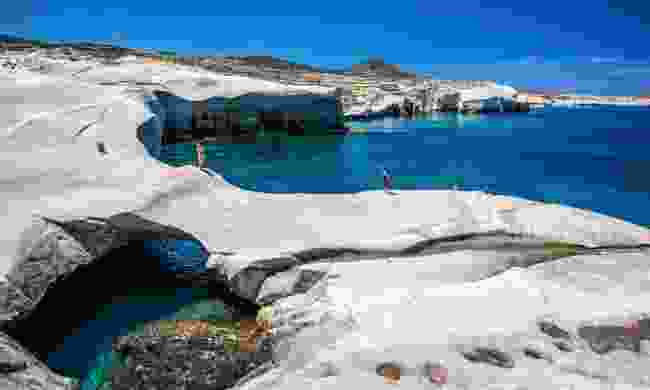 Sarakiniko beach at the island of Milos (Shutterstock)

The Cyclades' south-western isle Milos is an otherworldly land of thermal springs, ethereal rock formations and over 80 gorgeous beaches and harbours.

Famous for watermelon pie and the Venus de Milo statue, it is surprisingly crowd-free. Chances are you’ll have Sarakíniko’s lunar rocks, Kléftiko’s rock arches and the stunning Alogomántra beach pretty much to yourself. 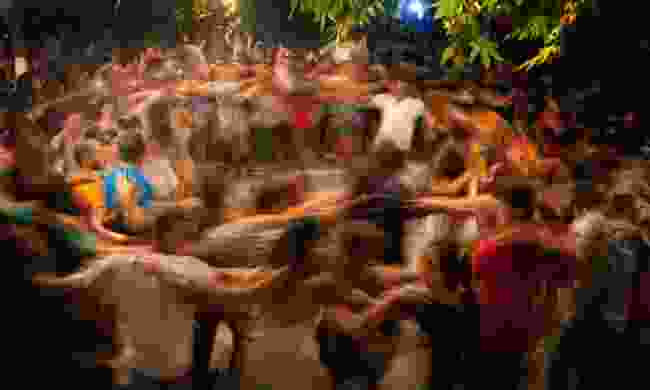 Dancing during a traditional festival on Ikaria island (Shutterstock)

Ever since local boy Icarus flew too close to the sun, the good folk of Ikaria in the North Aegean Sea have been taking it pretty easy. Shops don’t open until around noon, and the island’s tavernas and restaurants operate on very flexible hours.

But if it’s a relaxed vibe you’re after, it can’t be beat. A word of warning: they love their traditional festivals on the island of Ikaria. Expect to be dragged in if you stumble upon one. 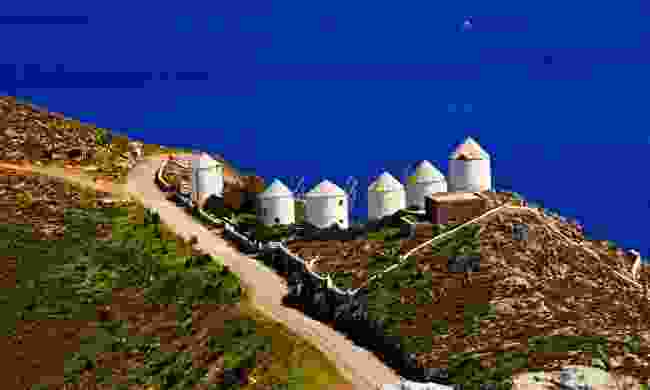 Leros has everything you want from a Greek island – beaches, fishing villages, tavernas, and a row of whitewashed windmills above Platanos.

But surprisingly, there’s a touch of Italy, too. It’s seen in the broad boulevards and grand rationalist architecture in Lakki, built by Mussolini when the Italians held the island during World War II. 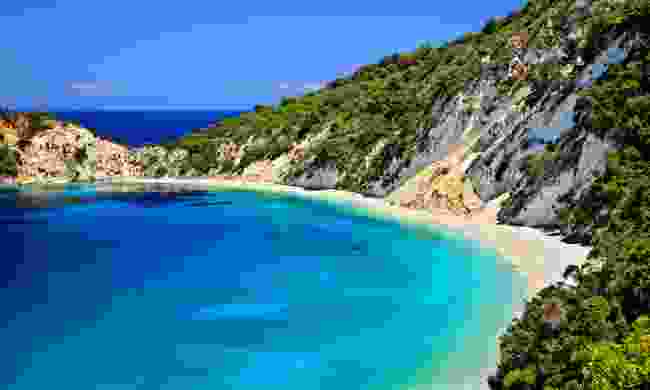 Famous all over the world as the mythical island of Odysseus, a visit to this small island quickly reveals why he was so keen to get back there in Homer’s Odyssey.

Surrounded by emerald seas, blessed with beautiful beaches and hidden coves, it’s the perfect place to enjoy fresh seafood in a local taverna, chatting with locals and just kicking back in the sun. 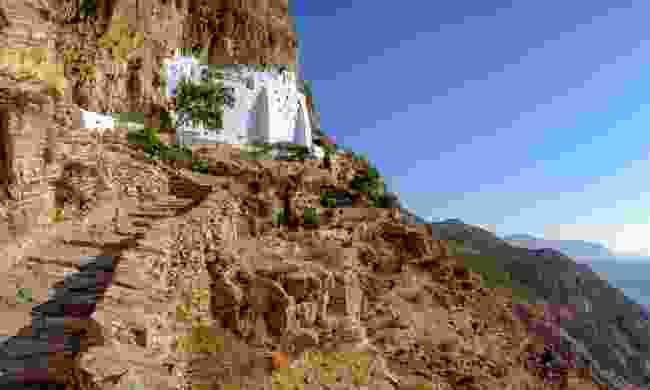 Known for its excellent diving and hiking, this island, tucked away in the distant south-eastern arc of the Cyclades, is also famous for its pies. Fried white beet and fennel pie, or xerotígana, as the locals call it.

(They’ll also insist you finish with a shot or two of rakomelo, the local fire water, favoured with honey).

The extraordinary whitewashed monastery of Panagia Hozoviotissa, clinging to the cliffs of the dramatic south coast, is well worth a visit, too. 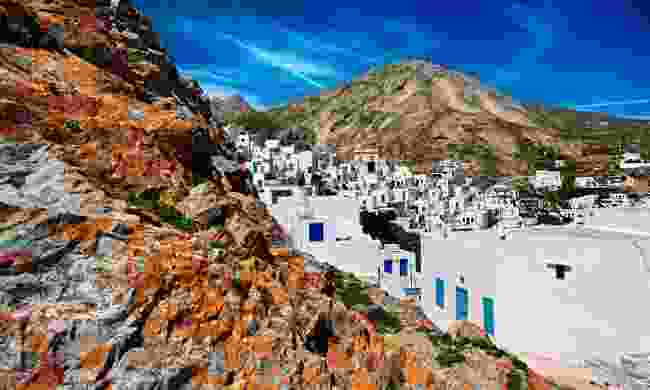 Foreign tourists haven’t descended on the beautiful island of Serifos yet, but Greek artists have. Its main town Hora, is regarded as one of the most picturesque in Greece. A tumble of white washed cubes, clinging to the side of a mountain... no wonder painters love it.

The port town Livadi shows what the Greek islands used to be like, and the beaches are uncrowded and clean. Take time to sip on a Greek coffee and chat to the locals. 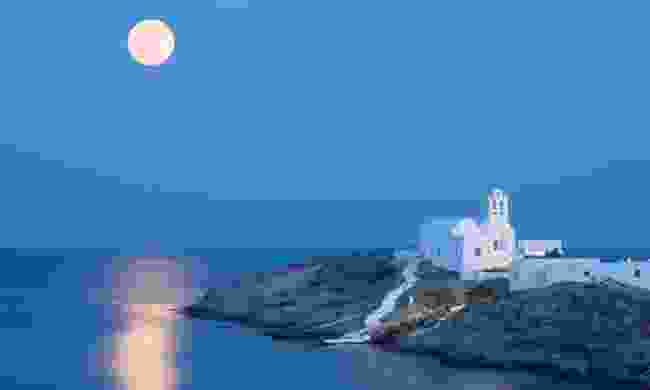 Criss-crossed with hiking trails, and a favourite with Greek chefs looking for a more relaxed dining outpost, Sifnos is an authentic island experience with a touch of modern Greek flair.

You won’t have it all to yourself – in-the-know Greeks, including chef Nicholas Tselementes, have been coming here for years. But the sandy beaches that fringe the island are delightfully free of too much racket. 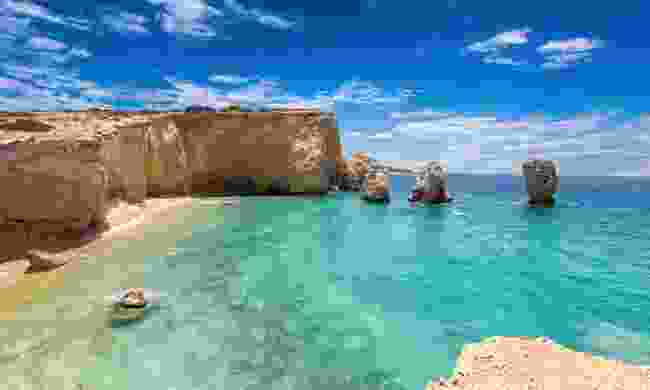 Emerald waters on the Island of Kato Koufonisi (Shutterstock)

Resort tourism is yet to reach Koufonisia. The local Tamarisk trees serve as sea umbrellas here and there is no need for vehicles. Everywhere you want to go – including the island’s six beaches – is within easy walking distance.

Visitors still camp on beaches during the summer, and there’s a distinct hippie vibe. Many of the 400 or so locals still fish for a living.

Highlights include the white sand and clear blue water of Pori beach, and the rock island of Keros, where archaeologists found about 350 broken figurines, dating from 2500 BC. 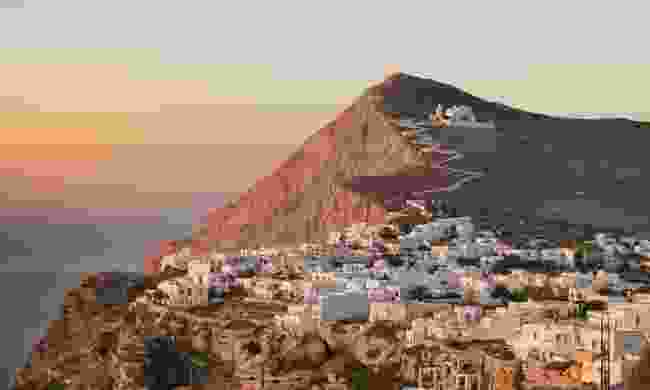 The Church of Panagia in Chora (Shutterstock)

An austere, volcanic island in the southern Cyclades, Folegandros offers beautiful, uncrowded beaches and sunsets that are every bit as dramatic as those in nearby Santorini.

The clifftop bar at Anemomilos is the ideal place to watch the spectacle, a refreshing retsina wine to hand.

Wander the meandering cobblestoned streets and alleyways of medieval Chora, the islands largest settlement and home to authentic tavernas and bars. 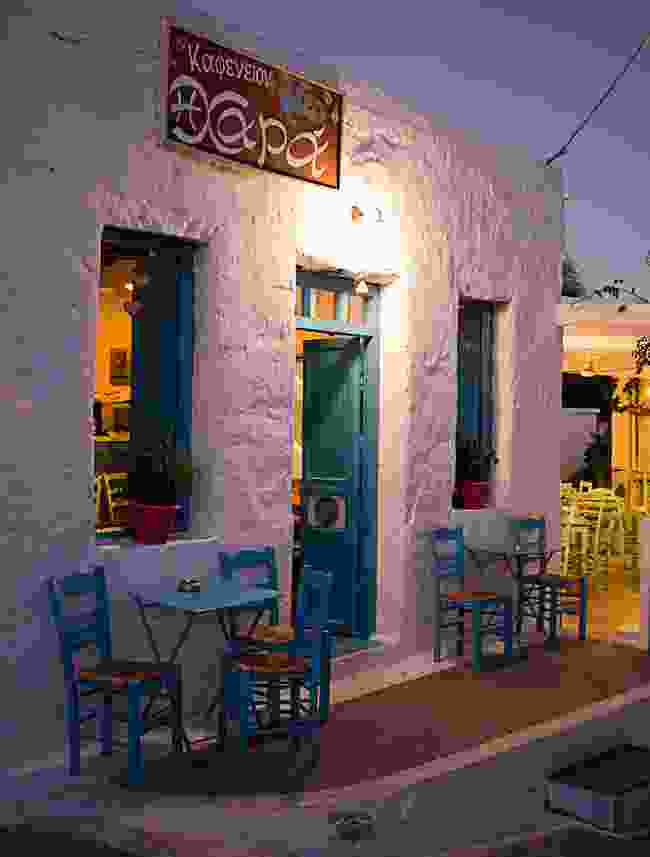 There’s not an awful lot to do in Schinoussa. The only settlement is a short walk from the port, and walking to one of the island’s 18 beaches and going for a dip will probably be your only activity for the day.

You could go for a boat tour, if you were so inclined, but chances are you’ll be drawn to one of the island’s truly authentic tavernas instead. 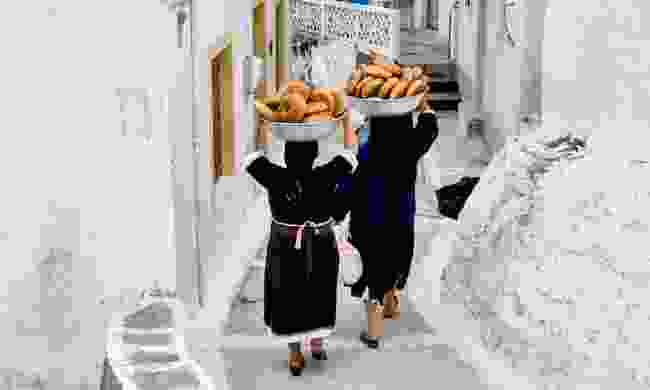 Coming back from the bakers in Olympos (Shutterstock)

An island of low-key resorts, clear waters and uncrowded beaches, Karpathos should be more popular than it is.

There are plenty of hiking trails. The beaches at Kyra Panagia and Apela are as beautiful as anywhere in the islands.

And the villages of Olympos, Menetes and Otho in the rugged interior are bastions of traditions that have been lost elsewhere. Get there now before it's too late. 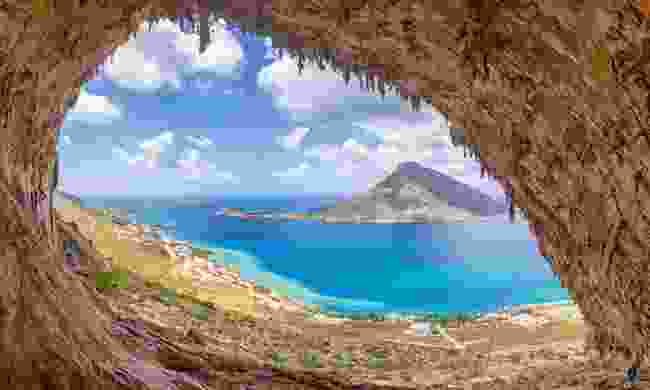 Little more than a mountain rising out of the sea, Telendos only has three beaches and six tavernas. Most people visit on a day trip, but those who stay longer are beguiled by its laidback charms.

You can snorkel through the ruins of an underwater city in the morning, hike from Paradise Beach to the ruins of the Byzantine settlement in the afternoon, and watch the sun set from a dockside taverna in the evening. Perfect. 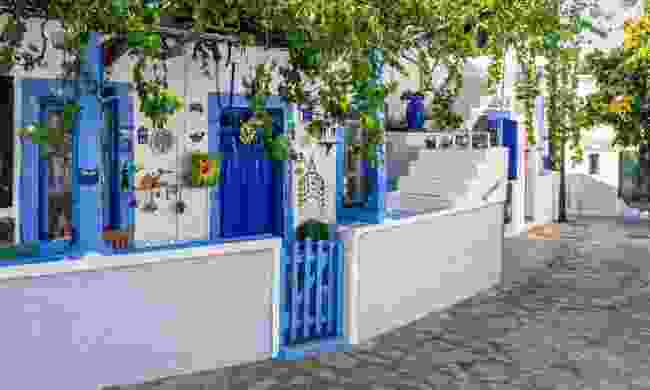 Odysseus got waylaid here on his way back to Ithaca by the beautiful nymph Calypso, but it will be the chilled-out charms of this tiny island that will capture your heart.

The one village settlement is delightful and there are some great beaches to explore, including Hohlakoura, famous for its bright white pebbles. The beach can be difficult to reach – going by boat is a perfectly amenable solution. 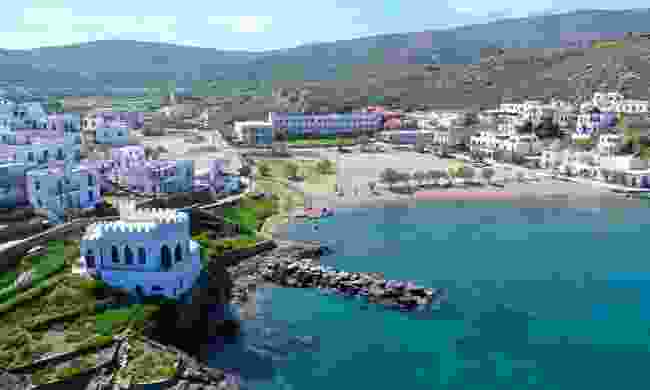 Get ready for an instant detox. This island is as off the beaten track as it gets. No one here locks their door, everyone knows each other and you’ll have an authentic Greek island experience every time you visit a local store.

Throw in natural hot springs and pleasant green valleys, and all your stress immediately disappears. The food is uniformly fresh and excellent, too. 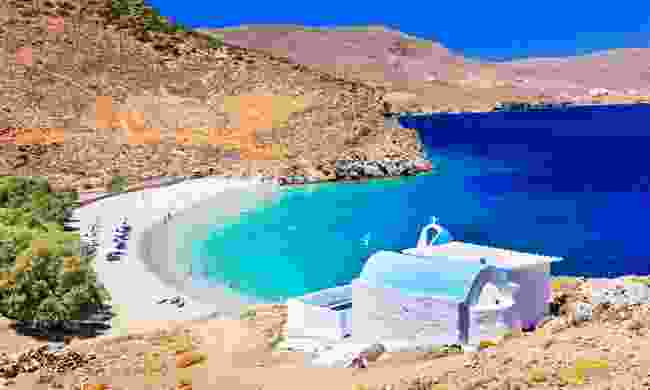 This butterfly-shaped island is located exactly where the Dodecanese meets the Cyclades, and boasts bluer-than-blue seas, beautiful beaches and centuries-old layers of history.

The skyline of Chora, the capital, is an unforgettable sight, a jumble of white buildings dominated by the Venetian Guerini Castle.

Take a boat to reach secluded beaches on the isles of Koutsomyti and Syrna and the rest of the world feels even farther away. 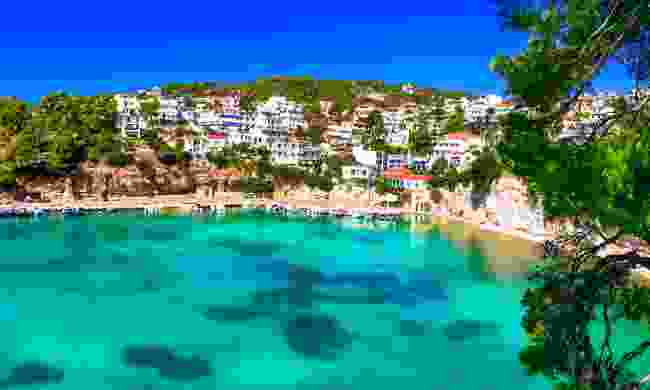 Blessed with rugged natural landscapes and surrounded by a scattering of small islands, Alonissos is the perfect Greek island for those wanting to get in touch with nature.

The remote interior is forested with orchards and olive groves, like patchwork. The surrounding waters form part of a National Maritime Park and is a refuge for rare seabirds, dolphins and the Mediterranean monk seal.

Folk medicine is popular here, too. Cure all that ails you with a myriad indigenous herbs.

5 Greek islands to avoid the crowds

Greek flavours: the 7 dishes you have to try