An insider guide to wild Northumberland

It proved too much for the Romans, but Gareth Clark finds inspiration in the wild, empty countryside, coast and kippers of his native Northumberland

Northumberland has two speeds. It’s just that neither rises much above walking pace, which suits it fine. As a child growing up here, that could be frustrating; as an adult returning after years away, it’s everything I wanted.

Inland, you’ll find heather-clad fells, Roman relics and sweeping valleys. To the east, a craggy AONB coastline crumbles to soft, pillowy dunes and pretty fishing villages, as Holy Island looms out of the mist, straight from a JMW Turner painting and still one of the most elegantly desolate places on Earth.

History this far north is writ in thick chunks of stone. It wasn’t just the Romans who were busy – Hadrian’s Wall spans 117km of Northumberland hills, cols, forts and, now, microbreweries – there are some 70 castles here, too, in what was once the largest medieval kingdom in England.

It hints at a fraught past. Border-dwelling Berwick-upon-Tweed has changed hands 14 times between Scotland and England (once as a ransom for King William I). And while Rome had to build one of the greatest feats of the ancient world to keep out Caledonia’s tribes, border reivers, vikings and pirates plagued the land long after they left.

That legacy is now a tangible, walkable history, and it was on the trails that I finally fell for Northumberland. Epic paths trek windswept castle ruins above long, quiet sands or thread gusty valleys and old Roman fort towns inland along Hadrian’s Wall. There is such a cold, sparse beauty to it all.

For an English county it is unthinkably wild and empty here. Just 320,000 people live in an area capable of squeezing in the largest Dark Sky Park in Europe. Nearly as many seabirds pack the Farne Islands offshore, which bustle with breeding puffins and resident grey seal colonies.

Wall country or coast, I get the same feeling. The two are just an hour’s drive apart, and while Northumberland doesn’t give up its secrets easily – even the Romans called it a day here – that’s what I like about it. Stood under the clifftop ruins of Dunstanburgh castle or atop Steel Rigg, the wind burning my cheeks, it’s a love that feels earned. 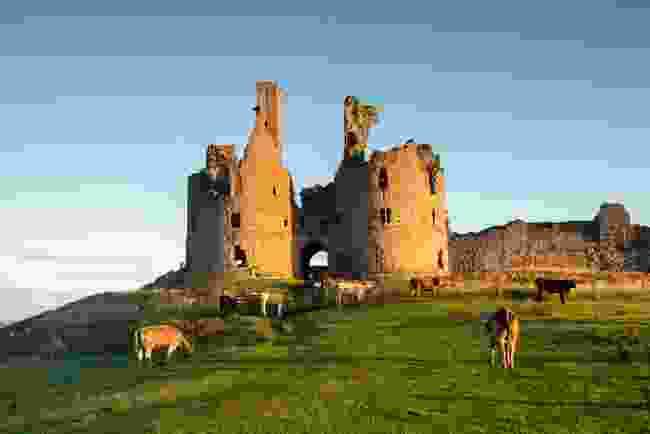 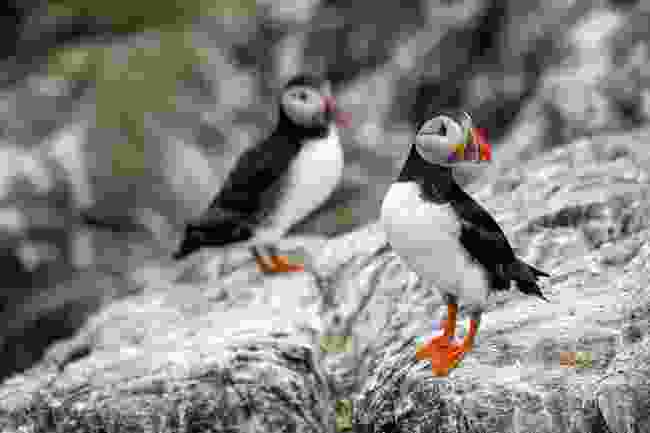 Puffins standing on a rock (Alamy)

How to spend 48 hours in Northumberland

Pretty Alnwick makes a fine base for exploring the coast. Home to the second-largest inhabited castle in England, its grounds are matched only by Alnwick Garden, a Kew-like wonder with cherry blossom walks, a poisonous plants display and ‘treehouse’ restaurant.

This is castle country, though. Warkworth and Bamburgh have fine specimens but it’s the ruins of Dunstanburgh that scratch the itch for drama. The 40-minute stroll there from Craster also lets you grab a lauded ‘Kipper N Bun’ from Piper’s Pitch before ploughing on to Embleton’s restful sands.

Alternatively, Beadnell Bay, Bamburgh and Seahouses are all worth exploring, with the latter a departure point for boats to the Farne Islands (see ‘4 Things’ lower down on this page). But the star here is Holy Island, where its castle (redeveloped in 1902) and ruined 7th-century priory take the eye. If conditions allow, the 5km pilgrim’s walk there over tidal sands is worth it for the views alone; it’ll also build an appetite for a stop at Bamburgh’s The Potted Lobster and some fine seafood. 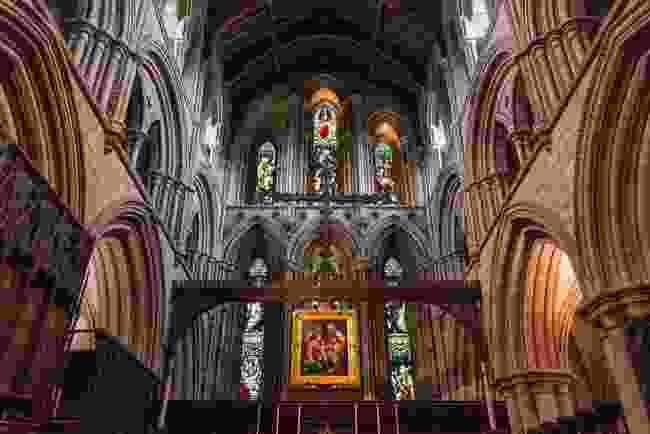 On to Wall country. Start in the market town of Hexham, one of the jewels of the Tyne Valley. Its stately medieval abbey overlooks a market place where cafes spill into the square in front of the Moot Hall (now a gallery).

Nearby, the tiny village of Corbridge was once a Roman garrison town, and relics of the old Fort can still be seen. Grab lunch at gastropub The Angel of Corbridge before heading for the Wall. The four-hour walk from Steel Rigg to Chollerford is perhaps the most impressive stretch of the Hadrian’s Wall Trail. Here, it scrabbles scratchy ridges, sheltered cols and slippery rock, as the wind reddens cheeks and the landscape unfurls.

Along the way, fort museums (Vindolanda, Chesters, Housesteads) add context to the beauty, while local beers at Twice Brewed Inn insulate against the chill. Finish back in Hexham, where the Beaumont Hotel has built a reputation for its British menu, with a dining pavilion in the nearby Abbey grounds perfect for warm days. 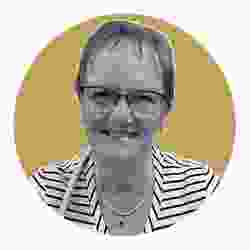 “The river Tyne flows through the Tyne valley and there are some lovely walks. Starting from Prudhoe riverside park, the walk to Wylam is one of the best. In the spring the wild garlic carpets the woods with beautiful white flowers. Upon reaching the white iron bridge stop and take in the fabulous view of the river. You will not be disappointed and may be lucky enough to catch sight of a herring or kingfisher and the fish jumping.”

4 things you must do in Northumberland 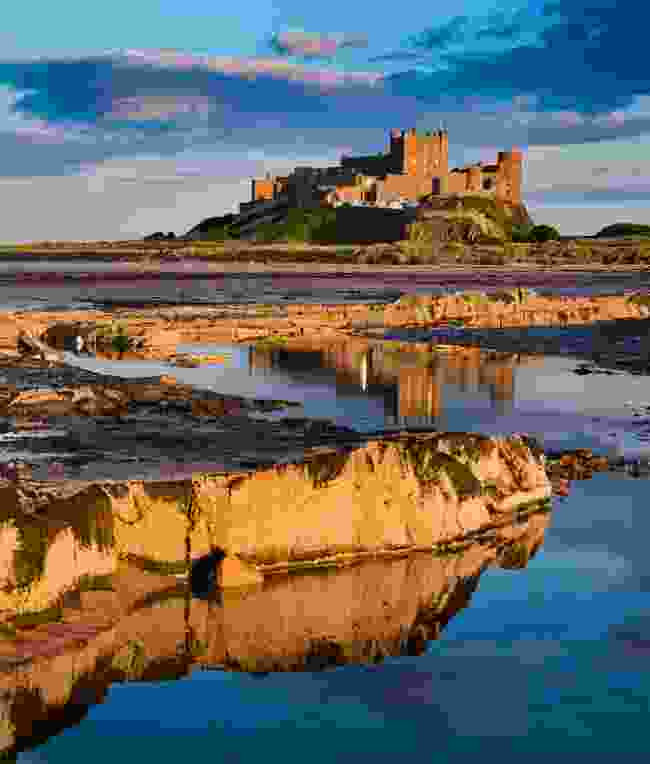 FLOCK Strap your boots on. The 100km Coast Path takes in castles, villages and dawn-lit shores, while the 135km Hadrian’s Wall Path truly rises to the occasion west of Chollerford. Then there’s the North Pennines, Cheviots and Simonside Hills to explore, with guided shepherd’s walks a good alternative way to see them. shepherdswalks.co.uk

STARGAZE Western Northumberland is home to the largest Gold Tier Dark Sky Park in Europe. On a clear night you can see the Milky Way or spy the northern lights (Oct–Mar) with the naked eye. Head to Kielder Observatory for a closer look. kielderobservatory.org

ISLAND HOP Monks and hermits – that’s who traditionally lived on the Farne Islands. Today, it’s a haven for 200,000 seabirds, with only a couple of its 28 islands (Inner Farne, Staple) accessible depending on the season. Visit on wildlife walks (bring a hat or be pooped on!) and boat tours from Seahouses.
farne-islands.com

Getting there: London-Edinburgh trains pit stop on the coast at Alnmouth and Berwick upon Tweed; change at Newcastle for the Tyne Valley line to Hexham. By car, the A1 and A69/A68 connect the two respective areas, which are an hour’s drive apart. Buses connect most villages, with the AD122 route linking Hexham with stops along the Hadrian’s Wall Trail.

Where to stay: The Cookie Jar in Alnwick was a Convent of Mercy before it was a boutique hotel and has views of the castle. Walwick Hall is a grand country estate hotel, just off the Hadrian’s Wall Path, that’s well loved for its afternoon teas.

Guide to the Peak District