With unique safari lodges, ‘farms’, eco retreats and desert shipwrecks all set to open this year, we take a look at some of the coolest new places to stay in 2017, including one hotel with interesting little bricks… 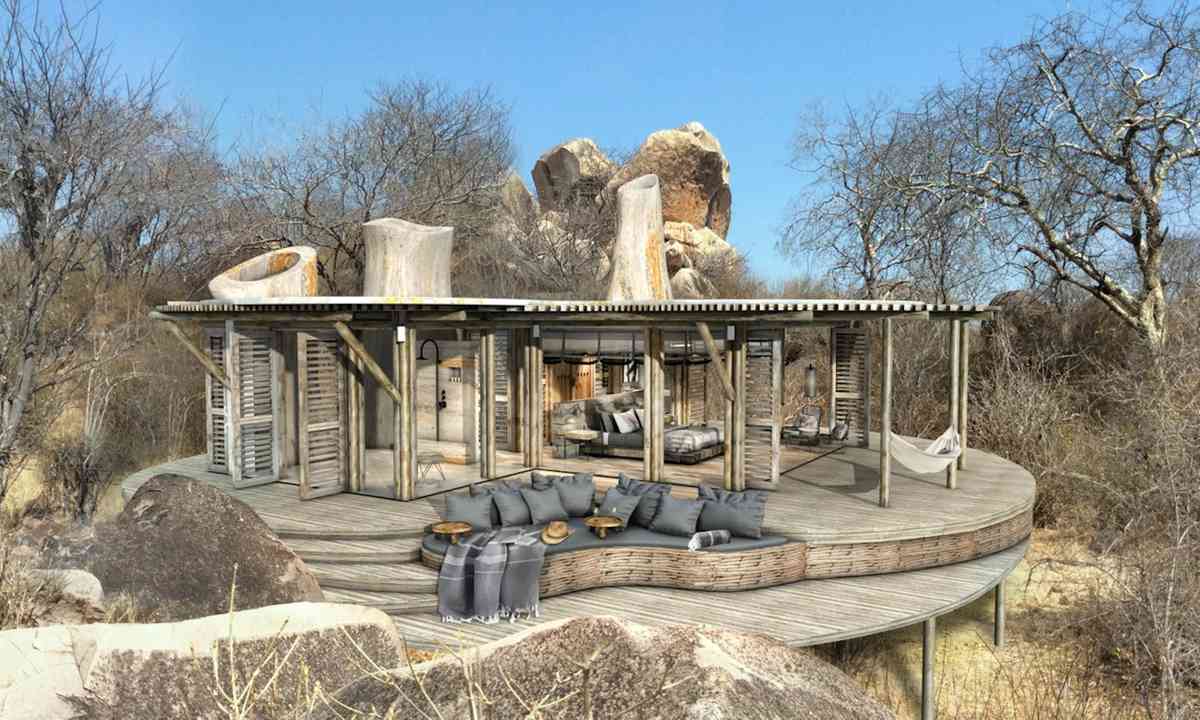 Ruaha National Park is one of Africa’s best kept secrets, but those in the know, including Ben Fogle, claim it's one of the continent’s richest wildlife locations.

Set in the heart of a 150,000 square kilometre conservation catchment area, the National Park’s dramatic landscapes are home to one of the largest populations of elephant on the planet, big herds of buffalo, prides of lion and abundant game.

Jabali Ridge (pictured, above) is set to open in September 2017 in Ruaha National Park. Built entirely with wood from local, sustainable sources, the luxury lodge will consist of 8-10 contemporary, stylish suites, all creatively positioned among the surrounding rocks and baobab trees

The concept is to make guests feel closer to nature, blurring the lines between inside and outside. Suites have an infinity pool and rooms with views out over Ruaha, with walkways across the property wandering through the rocky outcrop. This is a high end way to get away from the crowds but close to the wildlife. 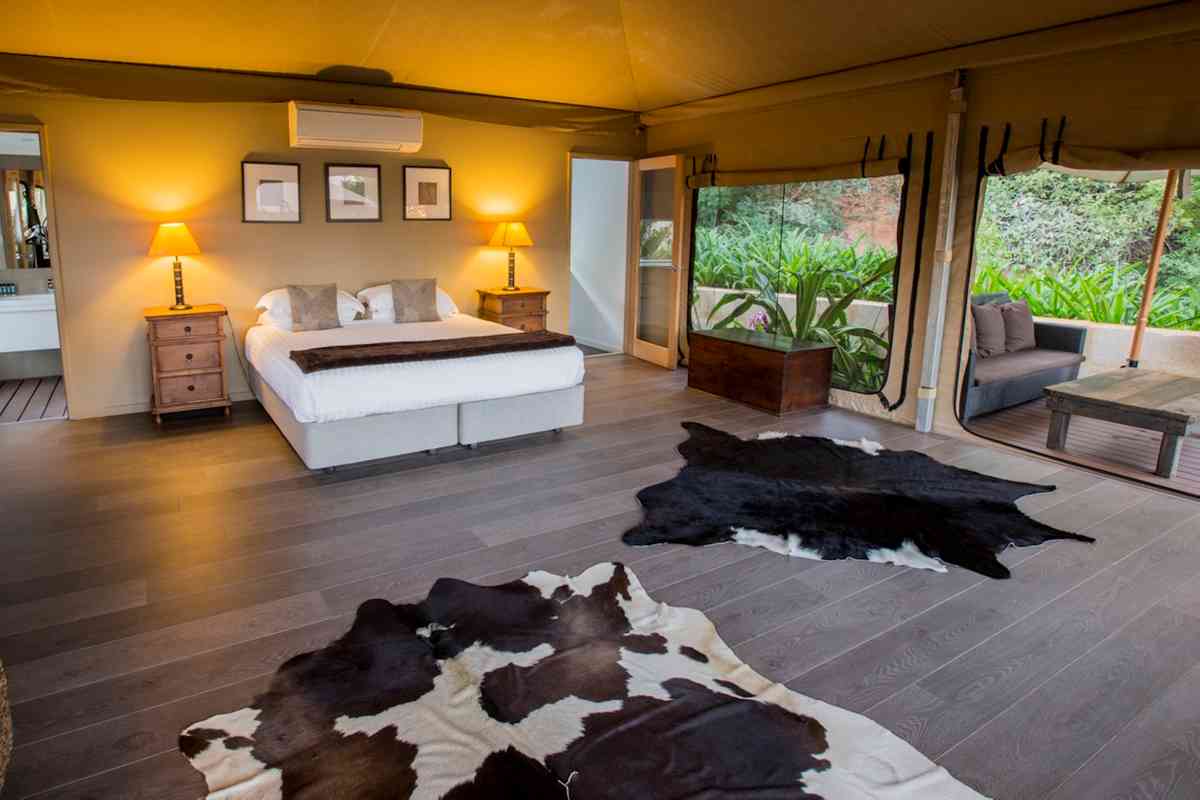 One for the tail end of the year, if all goes to plan, Pinky’s new tented eco retreat is being built on Rottnest Island in Western Australia, a nature reserve that’s famous for its wildlife and beaches, just 30 mins from Perth by ferry.

The winners of Wanderlust’s Photo of the Year 2015 competition won a trip to Western Australia last year and rated Rottnest Island as one of the highlights. The car-free island has 63 white sand beaches, snorkelling trails and wildlife, including the quokka (photogenic marsupial that’s similar to mini kangaroo), whales, dolphins and seals

The new glamping retreat will include 29 luxurious 4 and 5 star eco-tents, with 10 affordable two-bedroom ‘family’ tents, as well as 35 backpacker or budget tents. There will also be a Beach Club with a bar, café and restaurant, all with views over the beach and acrross to the Perth skyline. Being green and sustainable is the order of the day here, with recyclable water, solar energy, sustainable building practices and products, and innovative environmental solutions. One for families, the new Legoland Castle Hotel will open in this summer, just down the road from Wanderlust HQ at the UK’s Legoland Windsor Resort.

As the name suggests, the 61-room hotel will be a castle-themed family hotel, complete with Lego knights, kings, wizards and damsels. In each themed room, there will be a complimentary treasure hunt for every family, along with games consoles to keep kids (and perhaps adults) occupied.

Guests will also receive a collectible Lego brick and a wizard or knight activity pack on arrival, and there’ll be an opportunity to meet favourite Lego characters over breakfast in the Tournament Tavern.

Stays at the hotel also means early entry to the Lego park to enjoy the rides before the crowds arrive, plus games in the evenings. Adults have access to the Legoland Resort Hotel’s leisure facilities, including the spa, while kids will likely prefer to head to the pirate-themed indoor water play area.

Price: Themed Family rooms (2 adults/2 children) start from £572, including separate sleeping areas for adults and children, with 1 night at the hotel, including breakfast, and 2 days access to the park. If you want remote and away-from-it-all in 2017, this is probably the place. Ocean House is a fly-in 12-room floating lodge situated at Stads K’uns GawGa, also known as Peel’s Inlet, on the west coast of Haida Gwaii in northern British Columbia.

Haida Gwaii has islands and pristine rainforests to explore. The region is home to the indigenous Haida culture, who share the land with bears, eagles and other wildlife, while whales, sea lions and orcas populate the waters.

The new lodge, opening in May, is surrounded by otherwise empty shoreline and calm waters, with opportunities for exploring ancient village sites and untouched coastline, trekking through the massive cedar trees, or getting out on the water in kayaks or on Stand-Up Paddleboards. You might also want to do very little, staying back at the lodge to tuck into fresh local food and enjoying the peace and quiet.

Price: 3-night packages from $4410 CAD (approx £2760), including return flights from Vancouver to Haida Gwaii, helicopter and water transfers, meals and most drinks. 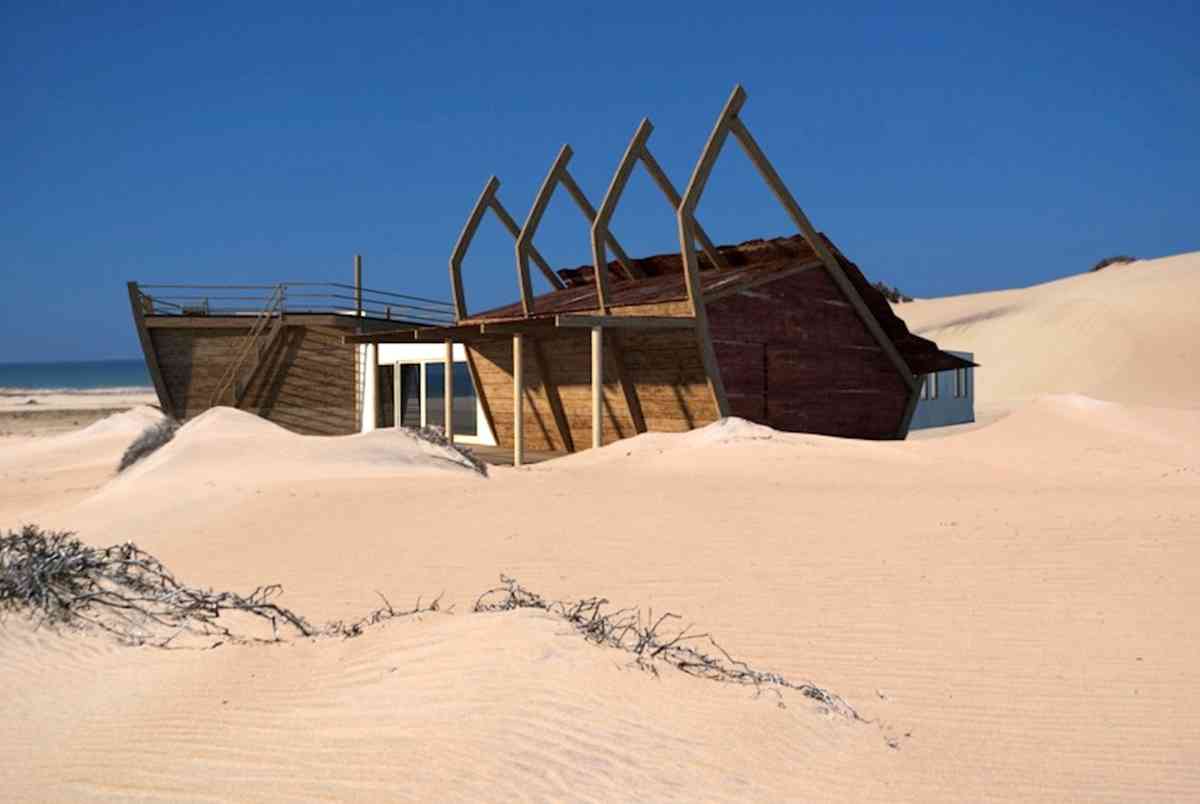 It’s still a bit of a gamble whether guests will be able to stay at Namibia’s Shipwreck Lodge in 2017. For a start, construction hasn’t even started yet. According to the latest news, the owners are still waiting for the government to approve their environmental impact plan. Fingers are crossed for this one, though, as it sounds like something a bit different.

If it goes ahead, the 10-room lodge will be built among the sweeping dunes of the Skeleton Coast, famous among travellers as one of Africa’s most exciting regions to explore. The unique-sounding building, set in the Skeleton Coast Central Concession between the Hoarusib and Hoanib Rivers, is the first lodge to be built on the dune itself.

It’s got an eye-catching design, appearing like a ship that’s found itself wrecked in the middle of the vast red desert landscape. The aptly named lodge has eight rooms and two family rooms, with each room featuring a small front deck with views over the dunes, the sea and the mountains.

Though you may not want to stray far from such a cool place, the lodge will also offer guests different activities, including excursions to the Möwe Bay seal colony, sundowner drives to the dunes and trips to the famous Clay Castles, a natural geological formation, where brown hyena burrow in the caves.

Hopefully, the ’Wreck open in the second half of 2017. Pitching itself as ‘the ultimate Nordic retreat’, the prices at Deplar Farm (pictured, above and top) are as likely to take your breath away as the scenery. Those who can afford it, though, will certainly enjoy a different kind of escape, away from the crowds.

Deplar Farm will open for its first heli-skiing season by March 2017. Located in a remote valley in northwest Iceland, surrounded by 3,000 feet-high peaks, guests will be able to heli ski from mountain tops all the way to the ocean’s shores.

Price: £8,200 per person for 4 days heli-skiing, based on 4 people taking 1 helicopter, including private concierge, full guide service, all gear for activities with the exception of ski boots, meals, drinks and airport transfers to/from Akureyri. There’s a new hotspot from which take in the massive, sprawling, diverse and ever-changing neighbourhoods of Brooklyn in New York: the rooftop of 1 Hotel Brooklyn Bridge.

Fresh from building a hotel in Manhattan, 1 Hotels will open their new 1 Hotel Brooklyn Bridge in February right on Brooklyn’s new riverfront park.

Not only is the hotel pet-friendly, which always scores bonus points, but sustainability is a big part of the design and operation, the hotel drawing on it’s surroundings, using shipping containers, pilings and piers as inspiration for the design, and utilising reclaimed materials, including original pine beams from the former Domino Sugar Factory.

The hotel will have it’s own rainwater processing system, while the 194 guests rooms will each contain an eco-friendly Keetsa mattress and low energy lightbulbs. Guests also have access to Tesla electric cars for exploring the city.

Chef Seamus Mullen will head up a farm-to-table restaurant, while the rooftop bar and lounge has a plunge pool for hot days and fire pits for cold nights, as well as views of the East River, Statue of Liberty and Manhattan skyline. From the roof down to the lobby, you’ll also find lots of greenery, sculptures and art pieces made from reclaimed materials, created by local Brooklyn artists. 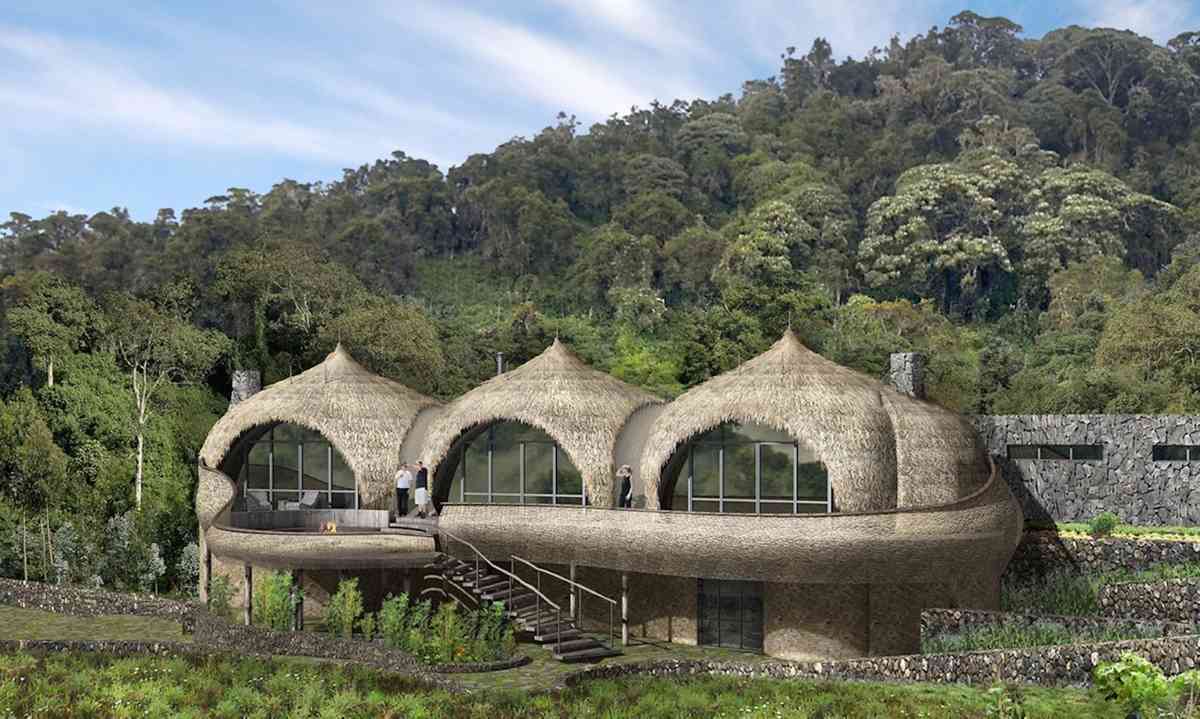 Set to open in Rwanda this summer, Bisate Lodge is situated next to Rwanda’s renowned Volcanoes National Park. With just six forest villas, the lodge is a comfy luxurious base for travellers wanting to see the country’s famous mountain gorillas, a once-in-a-lifetime wildlife encounter.

Set inside the amphitheatre of an eroded volcanic cone, Bisate’s grounds have views out towards the Karisimbi, Bisoke and Mikeno volcanoes, with plenty of space for guests to relax and enjoy the biodiversity and beautiful landscapes of the Albertine Rift.

Each forest villa features a spacious bedroom, reception area and bathroom, as well as the warmth of a central fireplace and a private deck from which to look out towards Mount Bisoke.

Of course, the gorillas are still the start of the show, but this place sounds like it can give them a run for their money.

Price: £882 per person per night, excluding transfers and gorilla permits.

At the point where California and Nevada meet, Lake Tahoe has a reputation as one of the United States’ most beautiful areas. With peaks surrounding the deep blue of the lake, this is a place to explore peaceful landscapes or to spend time swimming, kayaking, Stand-Up Paddleboarding, windsurfing, fishing and hiking, while the winter offers excellent skiing opportunities.

Due to open in June 2017, The Lodge at Edgewood Tahoe on the south shore of Lake Tahoe has taken a decade to complete, with a design said to ‘mimic’ the natural beauty of the surrounding area. The luxury lodge will feature over 150 luxurious rooms, as well as 10 multi-residence cabins.

In particular, it’s positioned as an excellent base from which to ski the famous Heavenly ski resort at the south of the Lake. 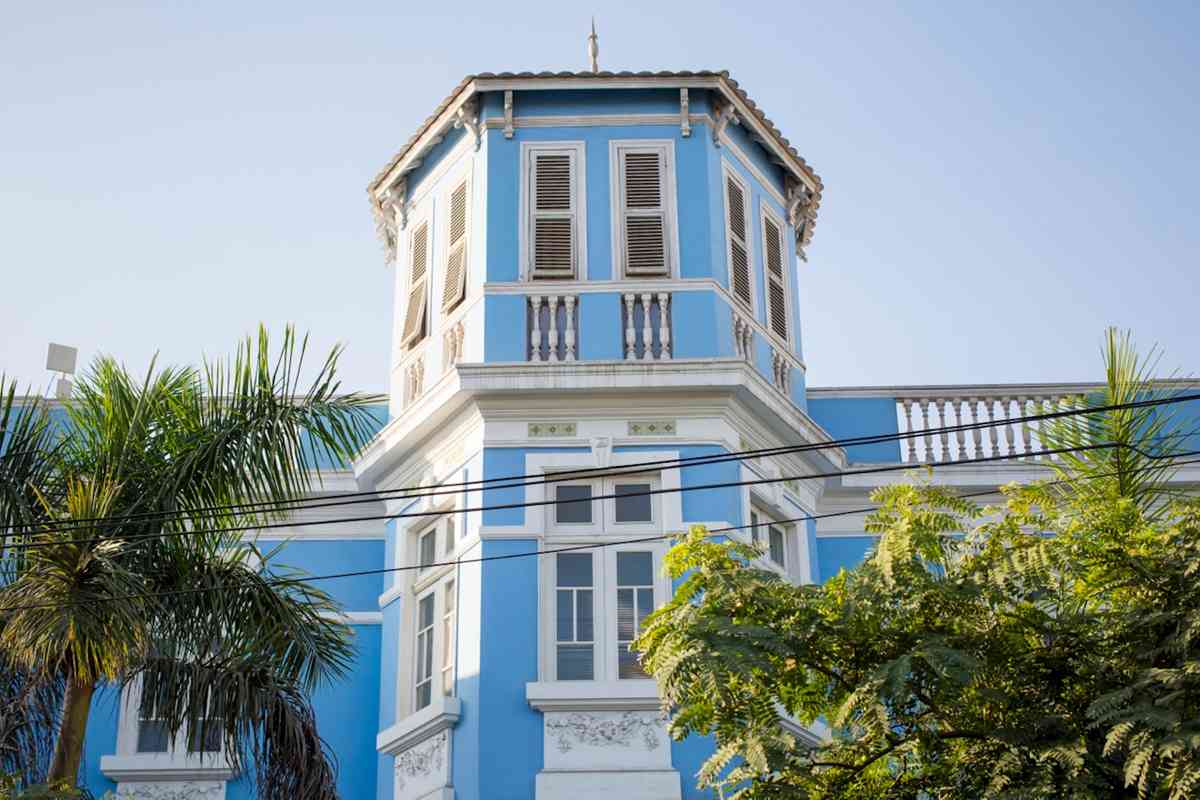 Peru’s capital, and the country's foodie and cultural epicentre, Lima has a new arrival. Set to open in April, the boutique Casa Republica (pictured, above) hotel will be the first four-star hotel in the bohemian neighborhood of Barranco, which has a reputation as one of the most romantic areas of Lima. The district is home and workplace to many of Peru’s artists, as well as the acclaimed Chala and Cala restaurants.

The hotel should be a stylish affair, as the hotel owners ran a hotel Design competition to incorporate crowd-sourced ideas into the final design, with the best idea winning a holiday to stay at the property.

The 17-room hotel started life as a 1920s mansion, channeling the glory days of Peru's Republican era, with rooms reflecting the bohemian vibe of the Barranco district.