Nepal trek planner: 13 of the best routes for every trek type

Whether overnighting in teahouses or camping on mountainsides, some of the best walks on the planet are found among the peaks and valleys of Nepal. We plot a route for every kind of adventure…

Nepal is arguably the world’s greatest trekking destination, and you could spend years exhausting all of its incredible Himalayan trails. But with such a range of routes, durations, geography and trekking styles to choose from, picking the right walk for you can be daunting.

Consider this ‘trek planner’ your own personal Sherpa to guide you through the fabulous range of choices. In it, we'll share over 13 incredible routes for first-timers to experienced trekkers, as well as a host of tips and useful information.

Click one of these links to skip ahead to your chosen section, or keep scrolling for the full guide:

Which type of trek is best for you? The first thing to decide is whether you want to camp or overnight in lodges known as teahouses. Life is undeniably simpler on a teahouse trek, mainly because you don’t have to fuss with a tent, stove or food.

Most people like the sociability, interaction and comfort of teahouses, but during high season the lodges are often bursting and you’ll find yourself interacting far more with tourists than with locals.

If you want to get off the teahouse routes completely, you’ll have to be self-supported and carry supplies, tents and stoves, and will likely need porters and cooking staff, which is when a good local agency comes into its own. 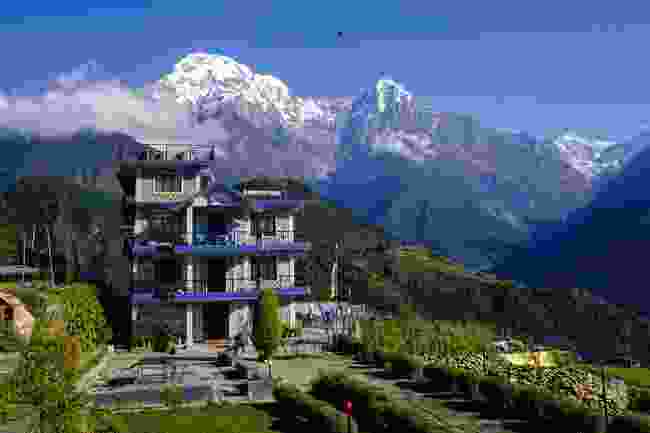 A classic, comfortable teahouse on the Annapurna Circuit (Shutterstock)

If you can handle the extra planning, cost and potential discomfort, the joy of being able to embark on a long, self-sustained wilderness camping trek is pretty hard to beat.

First-time trekkers will probably want to consider one of Nepal’s classic teahouse options. With more experience you can explore an off-the-beaten-path teahouse trek, where the lodges and food are simpler and you’ll need a bit more route-finding knowledge. 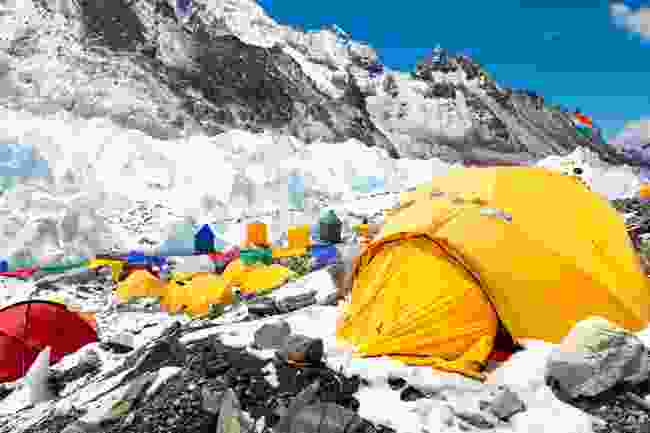 Experienced trekkers will want to explore the side valleys and high passes of the more popular treks, or head out on a camping trek into the wilds of the far east or west of Nepal.

Other factors come into play. Can you afford three weeks or just two? Do you want to hike among giant peaks or is village and cultural interaction more important to you?

Whatever you are looking for, your perfect trek is waiting for you in Nepal, and it’ll likely be an epic journey that you’ll never forget. 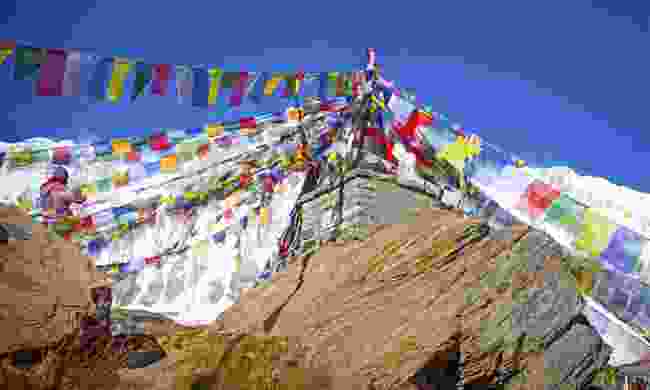 Once considered one of the world’s great treks, this circuit has suffered in recent years from road construction, which now covers half of the old route.

That said, the villages and side trips of the Manang Valley are glorious to see, with the traditional villages of upper Pisang, Bragha and Kagbeni particularly delightful, while the challenging crossing of the 5,416m Thorung La Pass has a sense of achievement.

The key here is to do some research and focus on side trips and alternate routes off the road. Most people now finish the trek in Jomsom, having started out in Besi Sahar or Chame (a short drive from Pokhara). Like all Annapurna treks, this starts out with a short drive from Pokhara (this time to Phedi). But, in terms of mountain views gained per time invested, the walk up Modi Khola valley into the high cirque of the Annapurna Sanctuary gives you the best bang for your buck anywhere in Nepal.

Views from your bowl of muesli include the mighty fish-tailed Machhapuchhare, plus Hiunchuli and the awesome Annapurna South Face, climbed by Chris Bonnington in 1970.

This is, naturally, a popular trail but the lodges are comfortable, with hot showers and WiFi, and the lower-altitude ethnic Gurung villages are charming. 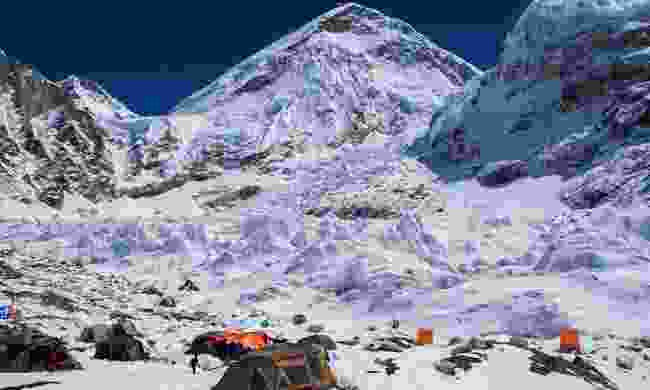 Trekkers fly in from Kathmandu by the dozen to set out from Lukla on what is likely the busiest trail in Nepal.

Everyone wants to see the world’s highest peak, but you only get closeup views of Everest and its famous Khumbu icefall from the Kala Patthar viewpoint for about two hours.

Longer-lasting highlights include Sherpa villages, views of beautiful Ama Dablam peak and the most sophisticated lodges in Nepal, if you don’t mind crowds.

Our tip? Add on a week and explore the side valley of Gokyo, with its turquoise lakes seen from the Gokyo Ri viewpoint, plus a day’s acclimatisation in the Sherpa villages of Kunde and Khumjung. The Langtang Valley was sadly hit hard by Nepal’s devastating 2015 earthquake, when the entire village of Langtang was buried in a landslide, but the area has since recovered, lodges have been rebuilt and the trail is better than ever.

Three days of valley ascent and trekking through bamboo and forest drops you in an alpine pasture full of yak-grazed meadows and glaciers dripping off 7,000m peaks.

The trailhead at Syabrubesi is just a bus ride from Kathmandu and there are lots of trek extensions worth exploring in the nearby Gosainkund and Helambu regions. If you want our advice, budget three days in Kyanjin Gompa for superb radial day hikes. 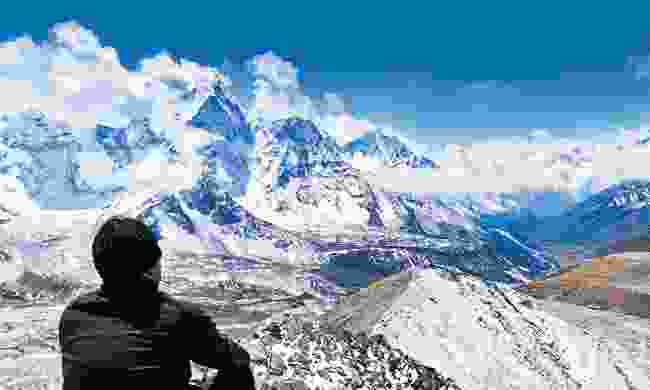 Starting out from Lukla (usually after flying in from Kathmandu), this is not an easy trek; you need to be fit and acclimatised, and will need a guide to get you safely over the passes. However, no technical climbing is involved and the lodges en route are good.

This is the connoisseur’s Everest itinerary, getting you away from the crowds and into unmatched mountain scenery. In recent years Manaslu has quietly earned the title of best teahouse trek in Nepal. Starting out from Sota Khola, it’s less crowded than other areas, thanks in part to high-season permits costing US$70pp (£55) for the first week and $10 (£8) a day thereafter.

From there you head up rugged gorges and into a high Tibetan-influenced region known as Nupri, dotted with monasteries, traditional villages, high lakes, views of Manaslu (the world’s eighthhighest mountain) and a dramatic high-pass crossing over the 5,100m Larkya La.

Though not exactly undiscovered, this might still be the best trekking secret in Nepal. 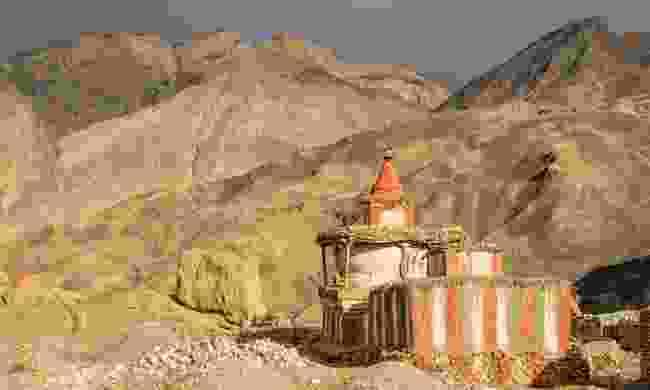 A chorchen on the outskirts of Tangye village (Shutterstock)

In return, you get access to a remote Tibetan-style landscape of colourful stupas, red-walled monasteries, pristine villages and some intriguing cliffside caves that were only explored a few years ago.

Most start out from Jomsom or Kagbeni, and it is now possible to do as a teahouse trek, but a dirt road winds up the western side of the valley, so be sure to return via the more remote and wilder eastern trail and the villages of Yara, Tangye and Tetang. 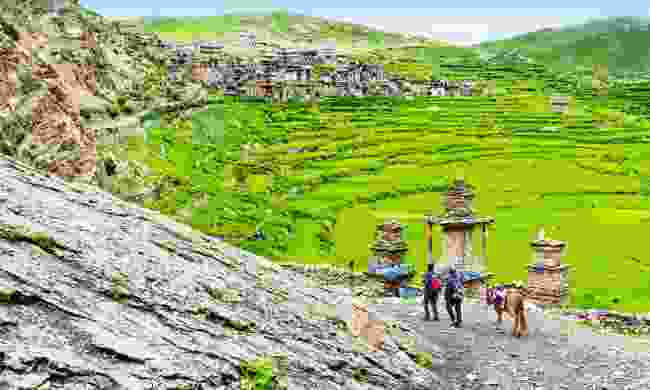 The photogenic Tibetan villages of Nar and Phu lie hidden just north of the Annapurna Circuit, and most trekkers walk blindly past the turn-off onto the trail at Koto in their desire for another slice of warm apple pie.

In return for a US$90 (£70) weeklong permit in high season, you’ll get to overnight in two of the most photogenic villages in the Himalaya, before soaking in views of the Annapurna range from the 5,320m Kang La Pass.

You rejoin the Annapurna Circuit at Ngawal village, so it’s also possible to finish this trek by continuing on to Manang and over the Thorung La Pass to Jomsom. 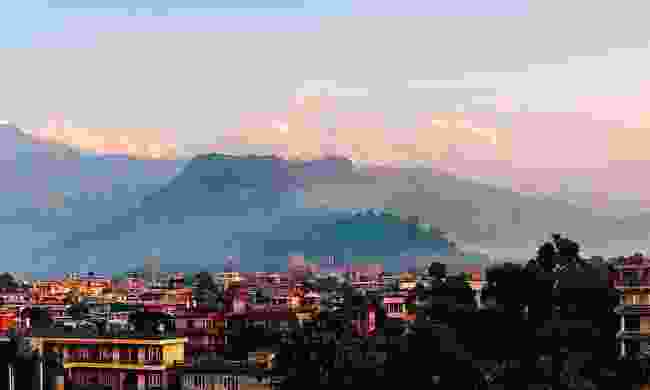 The city of Pokhara, gateway yo all of the Annapurna trails (Shutterstock)

A relatively new route, starting out at Naya Pul, the Khopra Ridge trek links together a string of recently opened community-owned lodges, making it perfect for those looking to put together a more ethical escape.

It takes you up through the southern foothills of the Annapurnas, before detouring away from the crowds up to some panoramic viewpoints that look over to Dhaulagiri (8,167m) and Annapurna I (8,091m).

It’s an excellent alternative to the busier trails found around Poon Hill, and access to the route, from the nearby city of Pokhara, is easy. 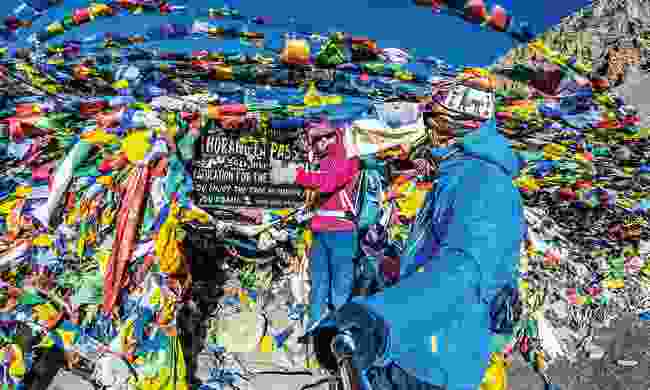 Can’t decide which route to trek? Easy, just do them all.

The Great Himalayan Trail consists of two networks of trails – one high-altitude, the other lower – that traverse the entire Nepal Himalaya for 1,700km from east to west.

Most people chip away at the trail piecemeal over many years, but it is possible to hike the entire route in about four months. For more information, see Great Himalaya Trail 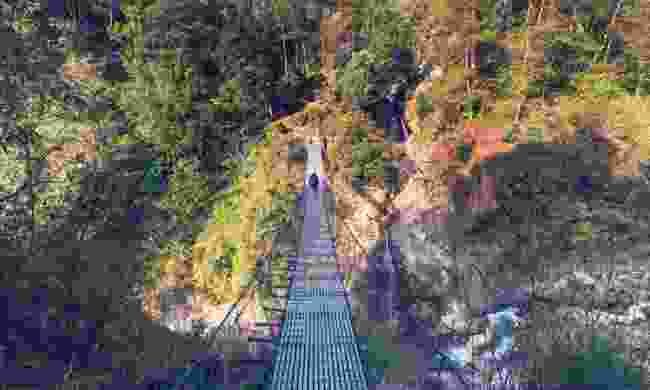 Trekking into the lush greens of the Kangchenjunga (Shutterstock)

Eastern Nepal is wetter and lusher than the west, and this epic journey to the foot of the world’s third highest mountain takes you through rice fields, rhododendron forests, ethnic Limbu and Rai villages and Kangchenjunga

Starting out from Taplejung, choose between the longer northern (via Ghunsa) or lower southern (via Yamphudin) routes, or combine the two for a three-week-plus adventure over the 4,663m Mirgin La Pass.

Simple local teahouses exist along most of the route, offering simple meals, but you will still need a tent, a guide and some supplies. 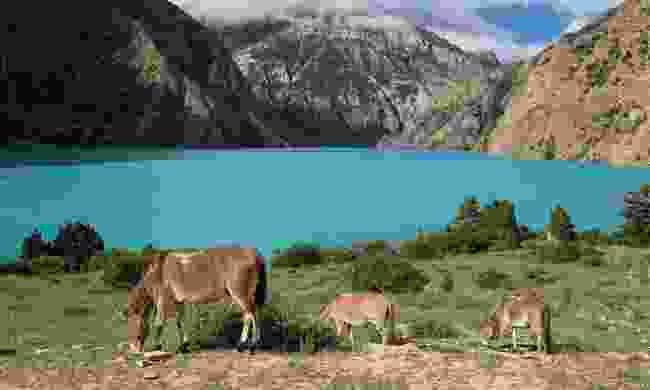 Best for: Expedition-style, wilderness, remote passes & a sense of journey

Because it is still little known to hikers (and also difficult), this remains an underrated gem of a trek.

Journey from the rice paddies near Pokhara up to the Jalja La Pass and its fine views of Dhaulagiri, down to Dhorpatan and then over four more passes through spectacular wilderness to lower Dolpo, with options to continue for another nine days to the Tibetan-style Do Tarap village and stunning Phoksundo, Nepal’s most beautiful lake.

This is a physical challenge involving expedition-style logistics, but it’s also an epic adventure that you’ll likely have to yourself. Setting out from Num and passing through Seduwa and Tashigaon before leaving the villages behind, this trek is rarely trod. Perhaps it’s because it’s an in-and-out hike (meaning you have to retrace your steps), or maybe it’s because it requires either a very long drive or an unreliable domestic flight to Tumlingtar.

But the close-up Himalayan views are as good as you’ll find anywhere. 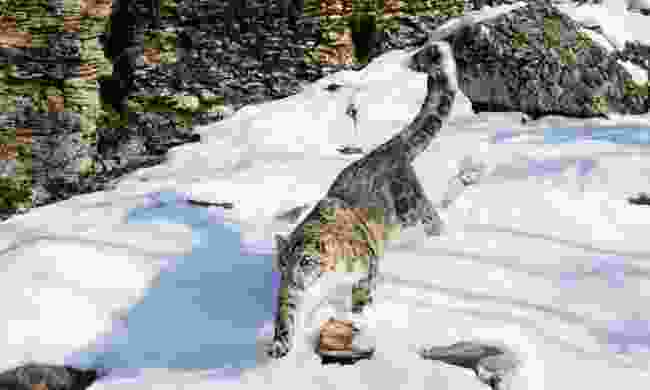 Upper Dolpo is known for its snow leopards, although they are an extremely rare sight (Shutterstock)

Like Upper Mustang, Dolpo is a semi-mythical region of high passes and Buddhist monasteries on the remote border with Tibet.

It’s hard to get to and expensive to trek (US$500/£395 for the first ten days; $50/£40 a day thereafter) but it’s one of the most spectacular corners of the high Himalaya and is nothing less than a pilgrimage for fans of Peter Matthiessen’s travelogue The Snow Leopard.

In seven days you can make the classic journey to Shey Gompa from Phoksundo Lake (though most start from the airport in Dunai); in another 12 you can trek across the roof of the Himalaya to Mustang and Jomsom.

Other types of Nepalese trek to consider 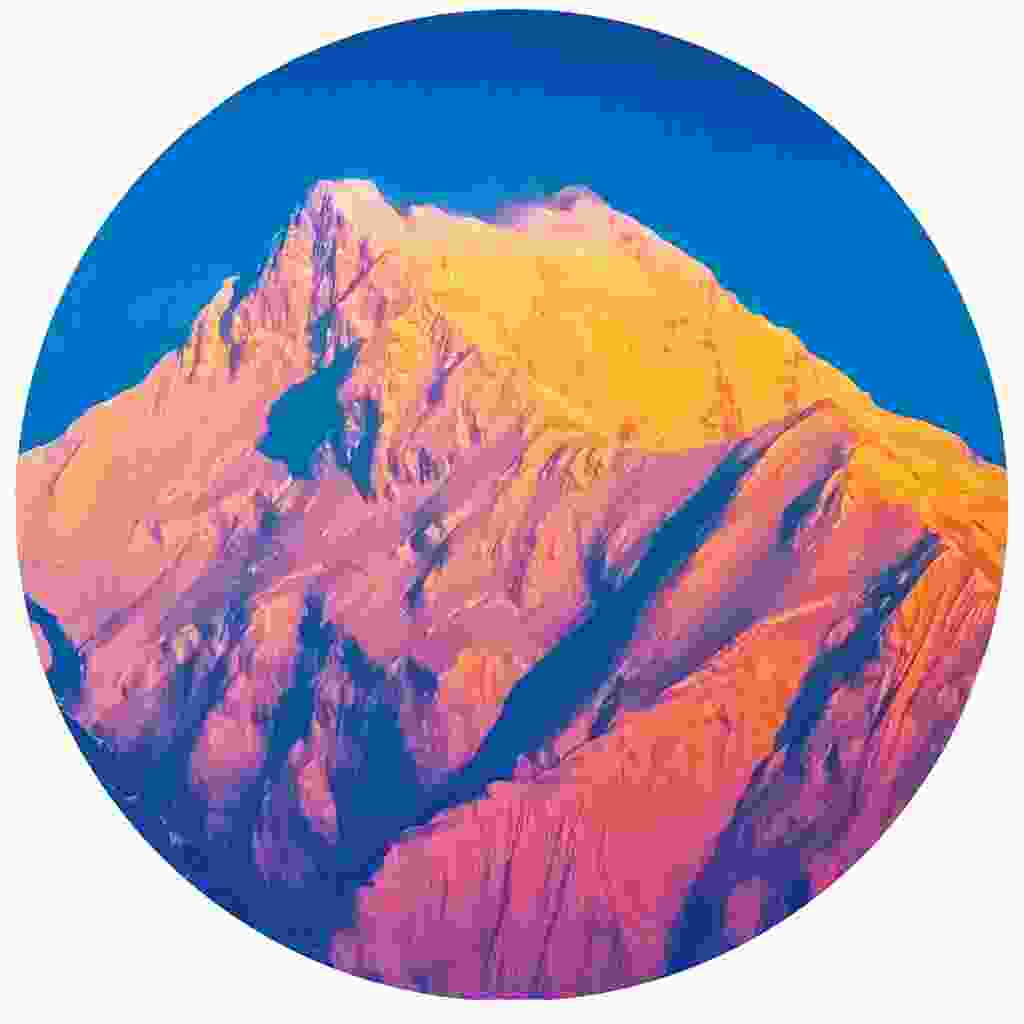 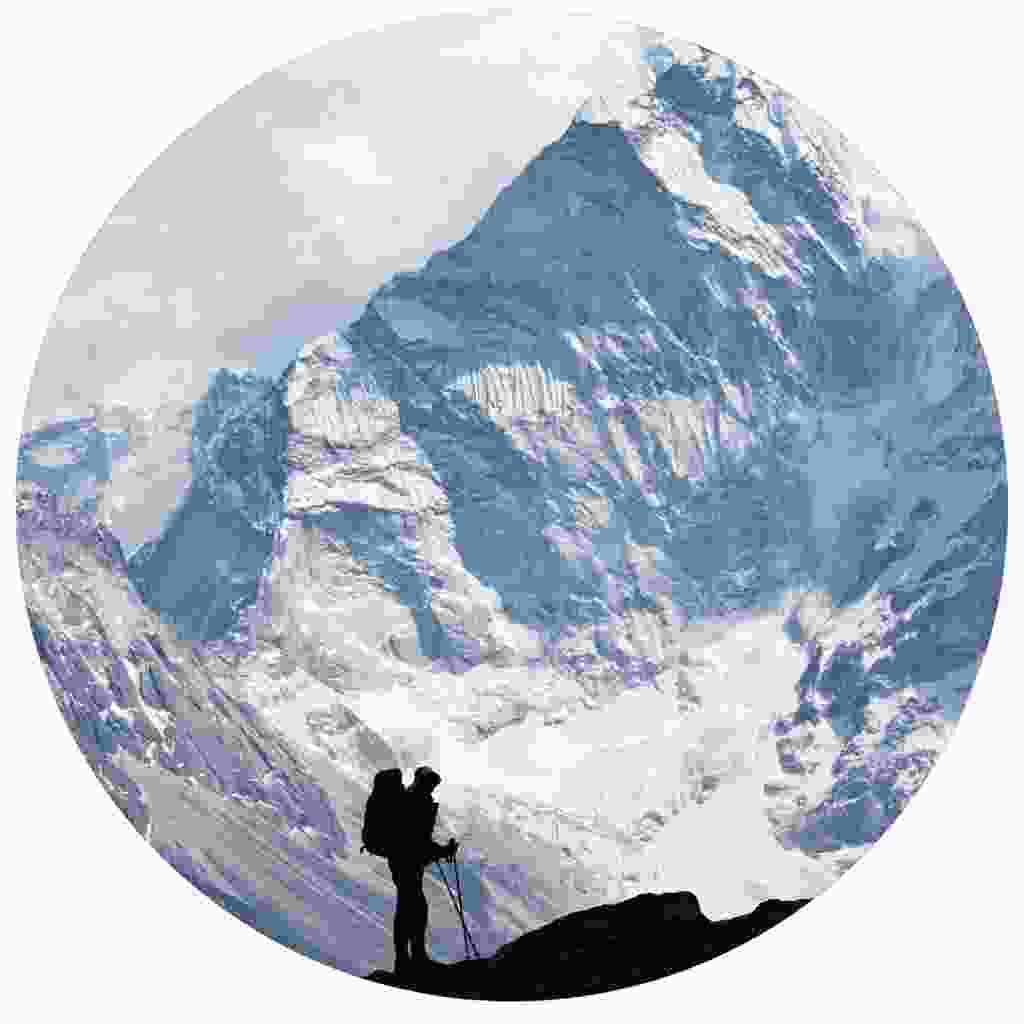 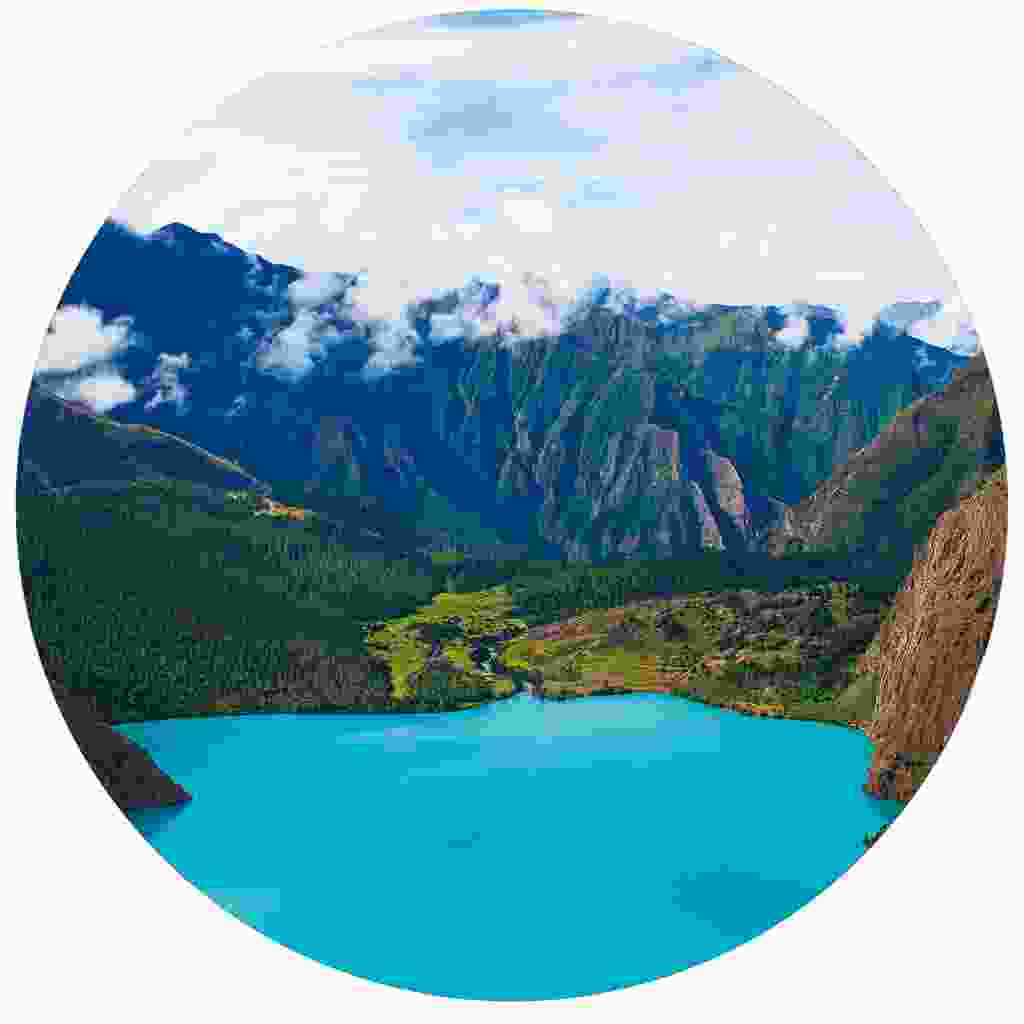 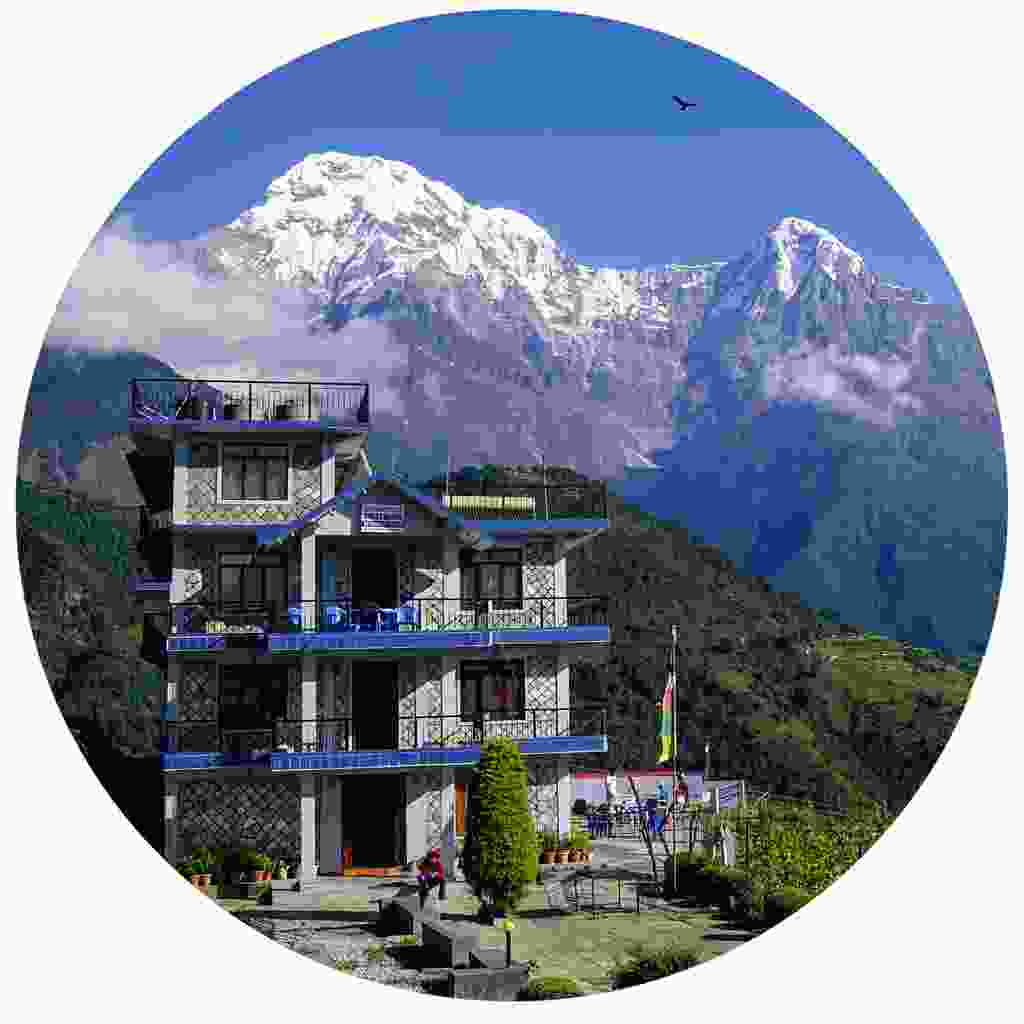 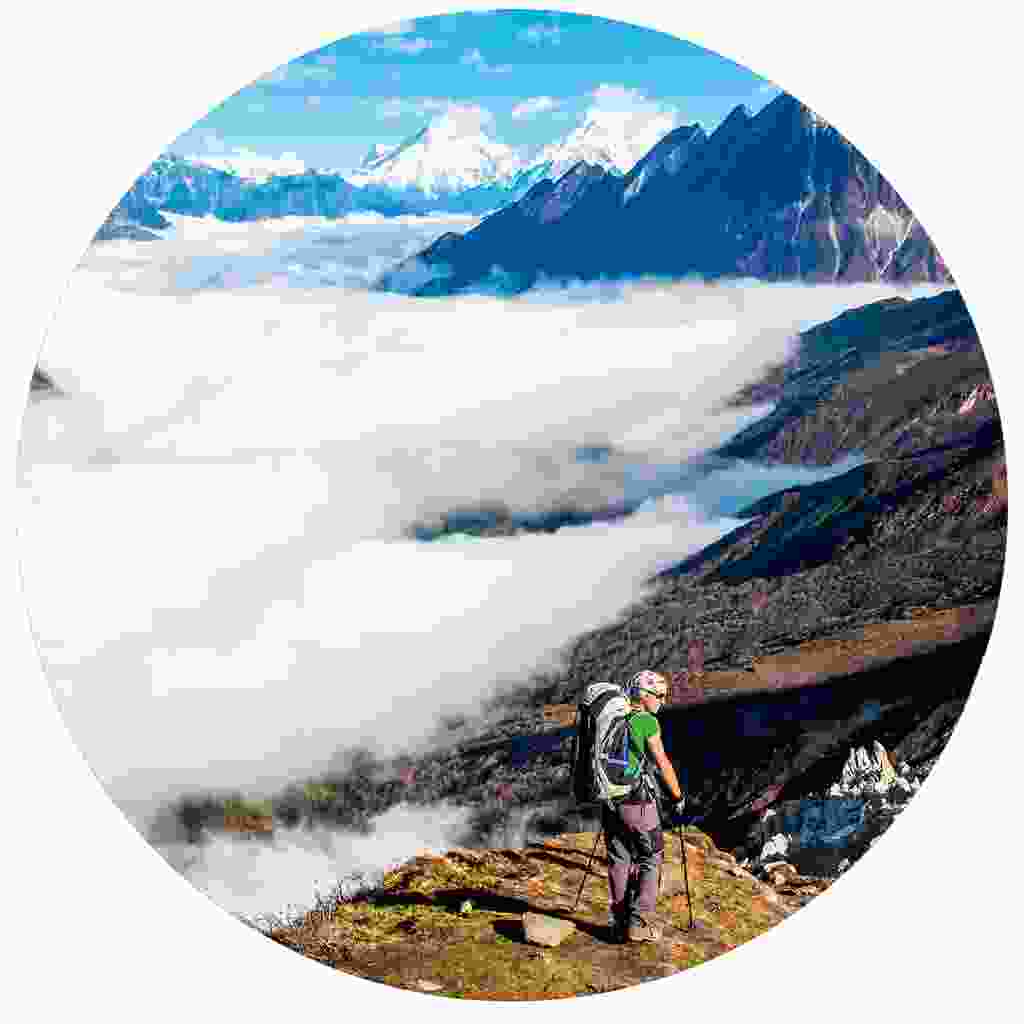 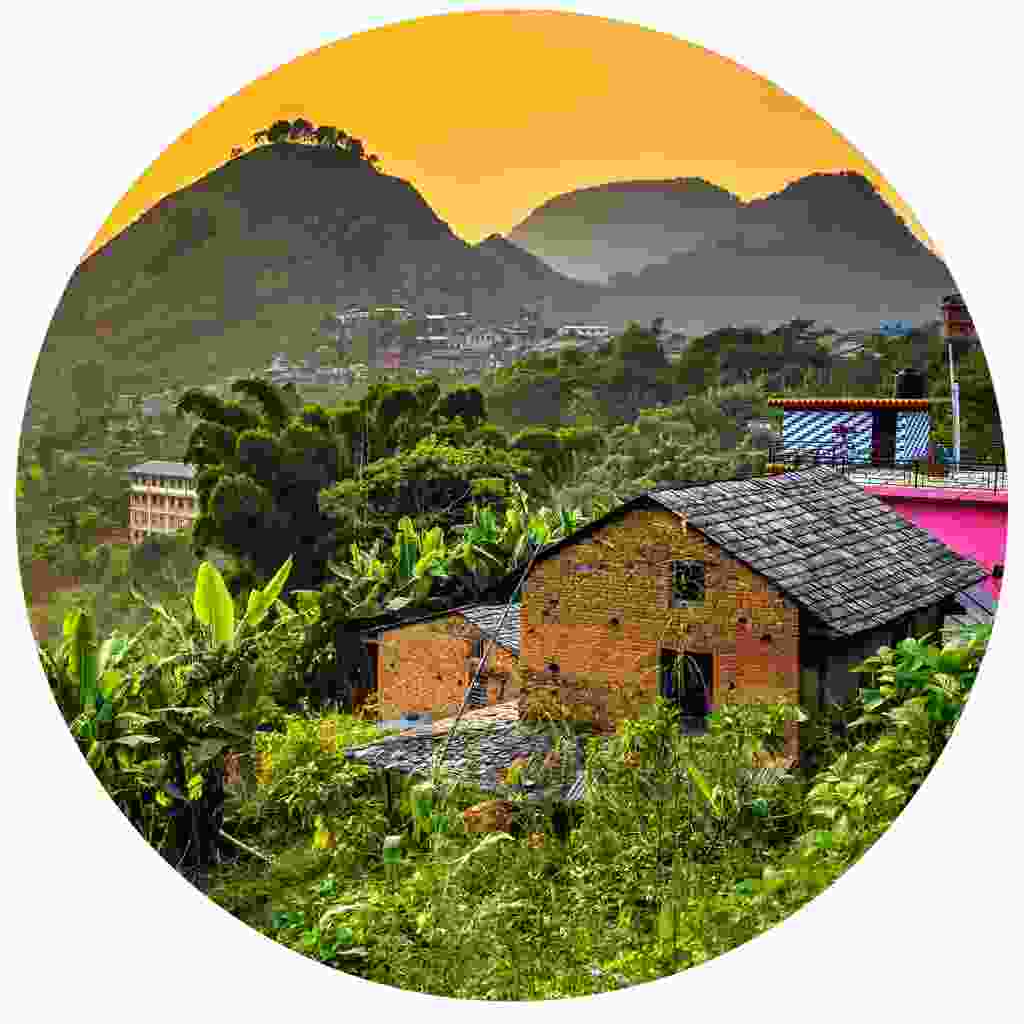 Here's 9 things you must do in Nepal

The most breathtaking Himalayan adventures

5 things (we bet) you didn't know about the Himalayas