Neil Laughton has climbed Everest a number of times. He helped a young Bear Grylls reach the top. And then, when Bear was older, fly over the top of it. He led the team that assisted the first wheelchair climber get to the summit. And he was on hand to help during the great storm of 1996. He talks to Peter Moore about the allure of the world's highest mountain. And the uncertain future it faces.

Can you give us a quick overview of your involvement with Everest – when you first went there, what drew you to it and your relationship with it since?

I had been to the Himalayas as a teenager, exploring the world on my gap year, fell in love with the mountains and Nepal particularly. I then set a personal challenge to climb the highest mountain on each of the seven continents – the seven summits – which obviously included Mount Everest, and then was given an opportunity in 1996 to first attempt to climb the mountain in a small international British team.

Unfortunately, that was the year of the worst storm in 100 years and ultimately my summit bid was unsuccessful. We ended up spending a few nights on the South Col Face, at Camp IV, throughout the storm and got involved in the tragedy and subsequent assisting of injured climbers.

I went back two years later with another young team of friends and soldiers, managed to climb the mountain on the second attempt. That included summitting with a young, 23-year-old Bear Grylls. So I obviously achieved my objective of climbing the mountain and completing the seven summits challenge.

I got drawn back to Everest a few years after that, in 2003, helping a young Barclays executive called Glenn Shaw, who’d spent his life in a wheelchair with brittle bone disease. Two years before he’d attempted to realise his life’s ambition, to see Mount Everest from Base Camp, in his wheelchair. Unfortunately, he fell off a path and down a ravine, broke his legs in eight places and got helicoptered off. Two years later he asked me to help him realise his ambitions. 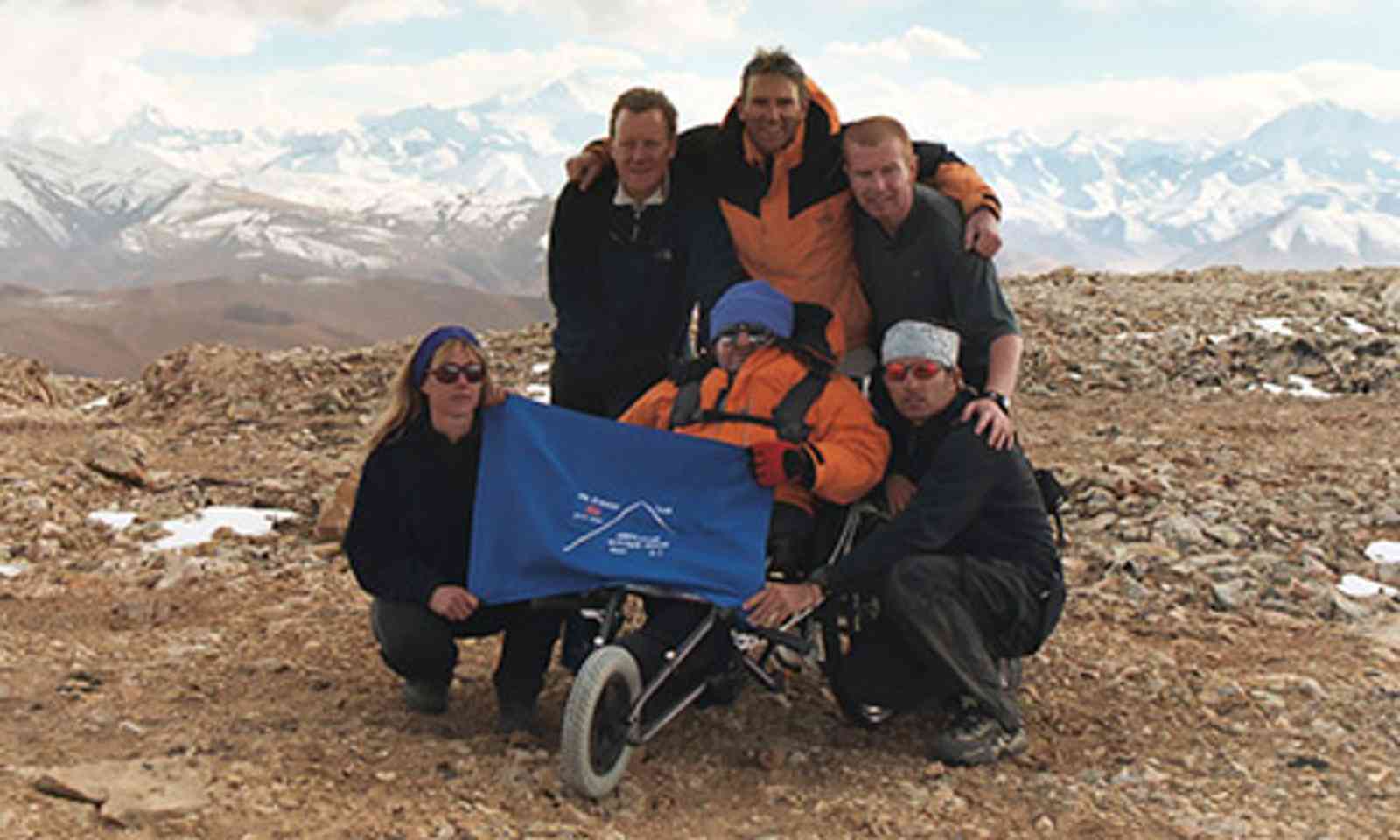 So I put a team together. We went to the north side. Frank Williams, of Formula One fame, helped design a specially adapted mountain wheelchair. We then put a joint British-Nepalese team together to help Glenn achieve his ambition. In so doing, we got the world high altitude record for somebody in a wheelchair – 20 odd thousand feet.

I was also involved and invited to be the Team Manager for Mission Everest which was Bear Grylls and Giles Cardozza attempt – successful attempt – to fly a powered paramotor above the height of Everest, which was filmed for a Channel 4 documentary. That was in 2007. I’m proposing to go back in 2015 for a special mission, which I can’t tell you about just yet...

The obvious appeal of Everest is that it is the tallest mountain in the world. Is it just that that draws people to it?

Speaking of ego, for an outsider looking in, it appears that climbing Everest is the preserve of the very rich. You need a lot of money to get there. Do you think it has lost it’s allure because now you’ve just got to be able to stump up the cash?

I agree in part. I don’t think it’s lost its allure. The allure is still there. Unfortunately, the commercialisation of the mountain – and that includes the Nepalese government who have encouraged and ridden the wave of the popularity and charged exorbitant fees to climb the mountain, and the Chinese also. Not that they’re unscrupulous, but profiteering, commercial climbing, guiding companies making large profits on groups of individuals who do have the money to burn and want to do this so badly that they will pay top dollar. And thirdly, I think some people are doing this for egotistical reasons and not necessarily because of pure joy of mountaineering reasons.

So, for example, rich executives, time-poor but cash-rich, are able to throw tens of thousands of pounds at a professional guiding company in order to get them to the top speedily and back down and out to making millions in the City or whatever it might be they do for a living. Unfortunately, these people lose out a little bit because they don’t really have the skills or the knowledge to do it safely and experience the joy of actually knowing what they’re doing on the mountain.

So they have no previous experience, in some cases, and I think it will eventually lead to another tragedy like I witnessed personally in ’96, which, believe me, we don’t want to see again. But unfortunately that will happen again at some point. 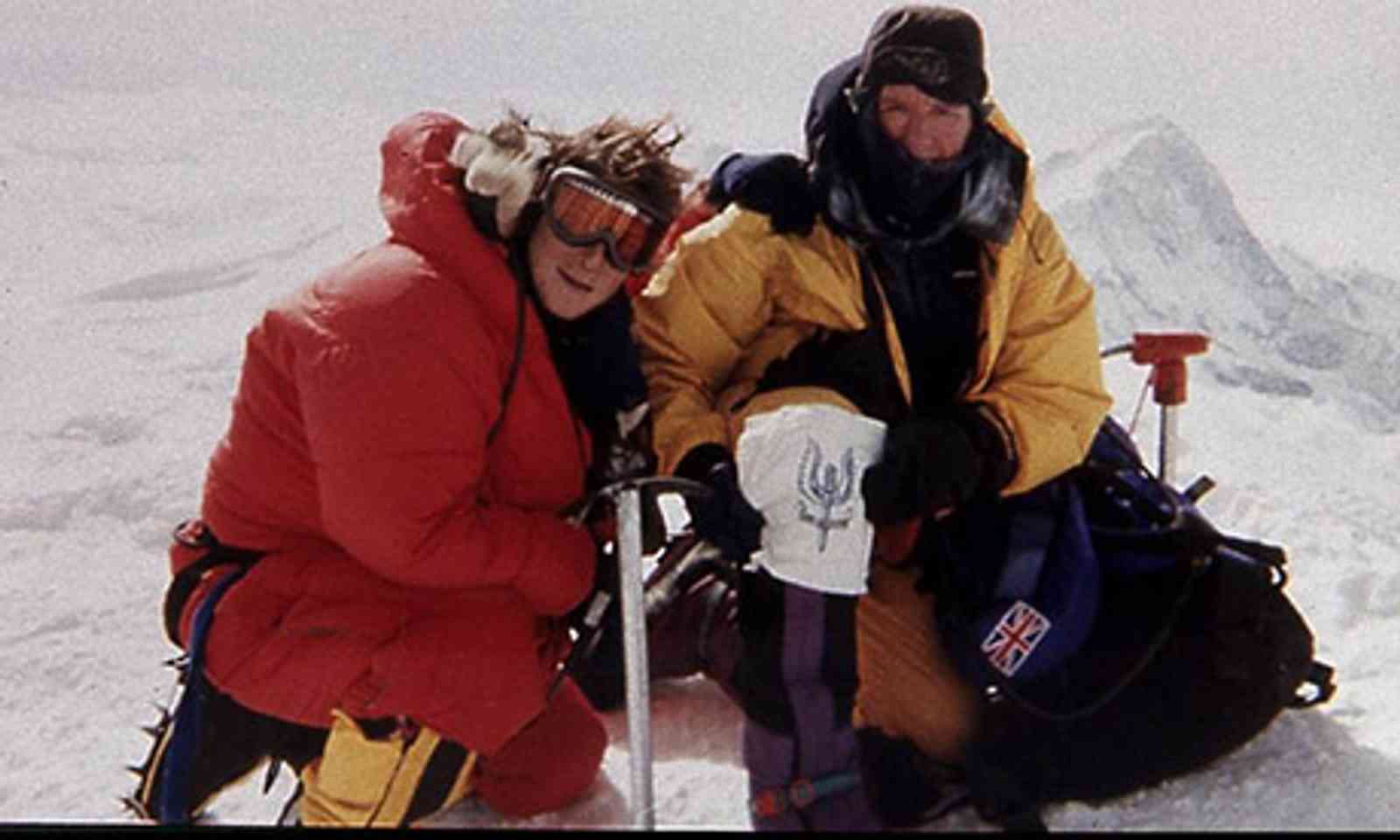 Is Everest too easy now?

If anyone claims that Everest is easy is misinformed or delinquent. It’s certainly not easy. It can be less difficult than perhaps one might predict but the weather can turn, circumstances can change very quickly up there. And when things do start to go wrong that can go wrong in a pretty dramatic and tragic way.

When I was climbing in the mid to late 90s the statistics were that for every six people that got to the summit, one person would die. Nowadays, the stats are more like for every ten to 12, one will die. And that’s just improved kit, improved satellite communication, improved weather forecasting, improved experience and so forth. Talk to the relatives of the victims of the disaster of ’96 and those of any number who have been killed in the intervening years and they’ll tell you it’s no walk in the park.

Is it possible for someone who isn’t rich to climb Everest?

There are ways to do it inexpensively. You can’t get around the governmental standard fees. But there are things like the environmental fee which is returnable if you don’t leave a mess. There is a base amount, quite a high level of money you need to find in order to get permission to climb the mountain. But then you write the financial plan accordingly.

If you want to go solo, unsupported, independent, self-guided, it’s a minimal cost from there really. A couple of international flights, your equipment which you would inevitably have already because to do it unsupported you would need to be experienced, enough food to survive on the mountain for six weeks. That doesn’t cost very much.

But most people don’t do that. They need to go with a big professional team, guided, lots of sherpas, lots of porters. And of course, the costs rack up. But again, there are expensive operators and there are leaner operations without the bells and whistles. You take your pick.

Speaking of sherpas, what did you make of the situation on the mountain recently where sherpas and climbers were brawling?

I think that was really sad. I can only surmise that tensions can and do run quite high at Base Camp. It’s a stressful environment. The sherpas do risk their lives every day setting up ropes and ladders over the crevices in the Khumbu Icefall and up the Lhotse Face and the more difficult parts of the mountain. There is a code of conduct which says that if you’re going to use somebody else’s equipment, you contribute to the cost of that going in and going up. Certainly in my time, it was standard practise.

Now if someone is a bit tight on their funds, they might say, ‘We’re not going to use your ropes and ladders,’ but inevitably they do and that’s when tensions can happen. It’s taking advantage and human nature being what it is, people get upset.

Is it getting too crowded on the mountain? Are there too many people up there in the peak climbing season?

I get the feeling there are too many people up there. I’m not quite sure why. Again, in my day, there seemed to be quite strict numbers of people and teams allowed on the mountain at any time. And if you missed that slot, then you had to wait for the next year and I think that was true right through from the 50s through to the turn of the century.

It appears to me that in chasing the foreign buck the governments have been issuing more permits. There was a picture I saw the other day of a massive queue of climbers going up the Lhotse Face. It was like queuing up to get into Wembley. It was unbelievable. So I can only assume that the numbers have been relaxed in order to get more money through the turnstiles.

You’ve been to the top. The big question, I guess, is what does it feel like when you get there? And is it worth it?

Absolutely. It’s like anything. If you want to play piano in Westminster Abbey and you get your chance to do that, it’s an amazing feeling.

For me it was a culmination of many years of hard work and honing my trade skills on different mountains around the world. And yes, it was a culmination of a dream for me to complete my personal challenge, which was the seven summits. Getting up there was a really special moment. I’d be lying if I said it wasn’t a tear-jerking, emotional moment. Only for a few minutes. The reality is that you are exposed in a very dangerous place, so you don’t have much time to get too emotional. So you take a few pictures, get a bit of video and head down again.

As well as Everest, you’ve gone and done a whole lot of other challenges. You’ve got you’re next Everest climb pencilled in for 2015. Have you got any other challenges on before then?

I try to have at least one decent project on every year. Next year I’m doing a project called ‘Flying With The Wounded’, taking six severely wounded soldiers, teaching them to fly. Then we go to Africa late September and do a 1,200 kilometre flying journey from north to south Kenya through the rift valley. They’ll be flying two-seat para-trikes. That’s next year’s project.

This year I’m doing a project taking 50 young disadvantaged kids from the inner cities who are in the care system on an expedition to a remote part of Iceland.

What kind of impact does an expedition like that have on these kids?

Well, I’ve been doing the kids programme for seven years now so I can tell you pretty accurately. We start with a bunch of kids who are really quite depressed, they don’t have a moral compass, they’re bored, they're dejected, they have no self confidence and low self esteem and really don’t have any energy to face life or doing anything positive in society.

After a 45-day intervention – that includes UK training prior to the expedition abroad – they come back motivated, they come back with self-esteem and with a game plan to make the most of their life from that point forth. So the impact is very high, I would say.

In fact, we have been doing some stats over the past few years and of this demographic we’re getting something in the region of 90% engagement. By that I mean those kids getting work, back into education or getting on apprenticeship schemes and work experience rather than back in their gangs and  such back home.

Neil Laughton is Founder and CEO of Laughton & Co, an organisation that aims to promote effective, authentic and inspirational leadership at an individual, group and strategic level.