Planning a staycation? Yaya Onalaja-Aliu and Lloyd Griffiths from the travel blog Hand Luggage Only have rounded up seven British highlights from their new book 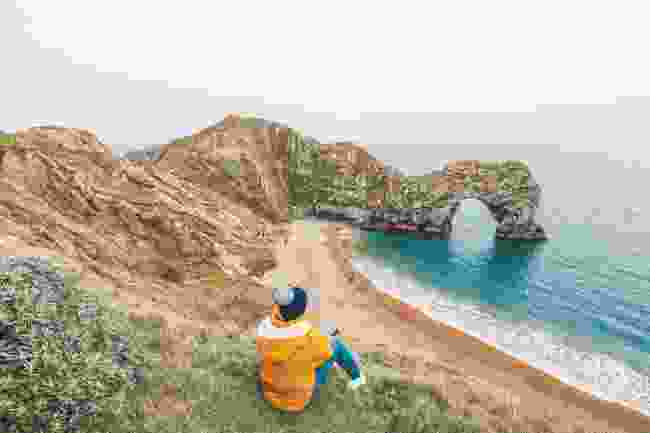 This incredible natural arch found on Dorset’s Jurassic Coast is one of the most popular places for holidaymakers to visit in the area, and it’s not hard to see why. Eroded by the waves thrashing at England’s shores, this limestone formation has been carved into an iconic arch. Eventually the arch will collapse into the sea, but for now, you can enjoy it in all its glory. Set right on the beach, it makes for a stunning backdrop for your day of fun in the sun. If you want to skip the crowds, however, visit in late spring or early autumn when there are fewer travellers. While you’re here, explore the coastline. You’ll find more unique geology at Lulworth Cove, seafood in the old fishing port of Swanage and award-winning beaches at Studland Bay all within easy reach. 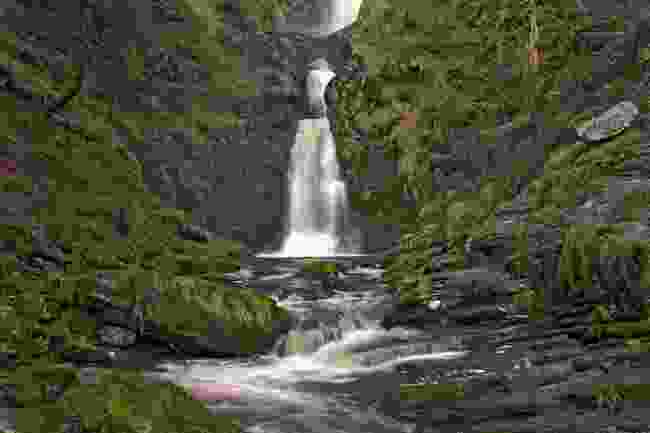 Widely regarded as the tallest waterfall in Wales, split over three levels, Pistyll Rhaeadr is one of the country’s most breathtaking sights. You’ll find it in Powys, near Llanrhaeadr-ym-Mochnant (good luck pronouncing that if you’re not Welsh). With its staggering height of 73 metres and bridge jutting out over the middle, you’ll feel like you’re in Middle Earth from The Lord of the Rings. If ever there was a place to appreciate how much it rains in Wales, this is it. The surrounding area is also great for hiking, so when you’ve seen the waterfall, explore more of Wales’s natural beauty on a nearby trail. It’s important to note that it is a Site of Special Scientific Interest, meaning it’s protected. So keep your eyes peeled for interesting wildlife, and take care to leave the area as pristine as you found it. 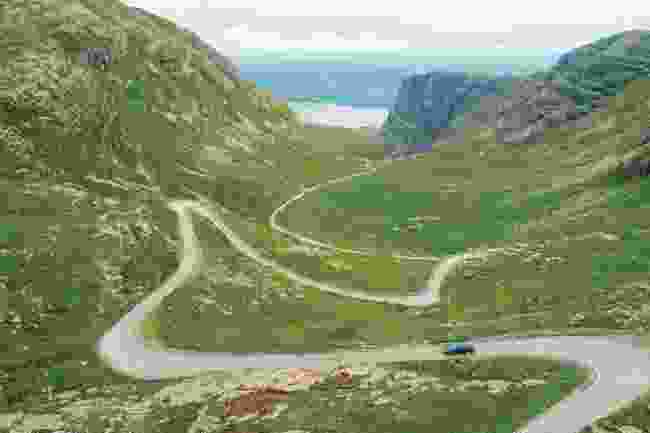 The first thing that strikes you as you make your way through Cheddar Gorge is how huge it is. Situated on the southern edge of Somerset’s Mendip Hills, this limestone marvel is one of England’s most important natural sites. The best way to explore the area is on foot. Wander through the gorge on a hike or, for abseil, cave or rock climb. The gorge is just up the road from the village of Cheddar, famous for – you guessed it – its cheese. The Original Cheddar Cheese Company has been making cheese since 1870. 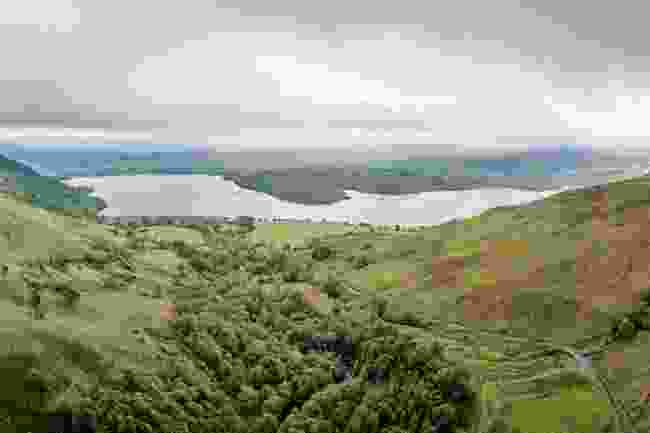 We first found out about An Lochan Uaine (Small Green Loch) at the start of a road trip through the Scottish Highlands. Legend has it that its unique colour comes from Dòmhnall Mòr, the king of the pixies, washing his clothes in the lake. Science, on the other hand, says that rotting wood on the lake floor creates algae that turns the water green. To see it for yourself, park near the Glenmore Forest Park Visitor Centre and walk from there, past Glenmore Lodge. At around 40 minutes each way, it’s a fairly easy walk, taking you past rolling heather-covered hills and the occasional rabbit. Alternatively, follow our lead and rent a couple of bicycles from In Your Element at the Rothiemurchus Pavilion – they’ve got helmets and bike trailers for little ones, too. 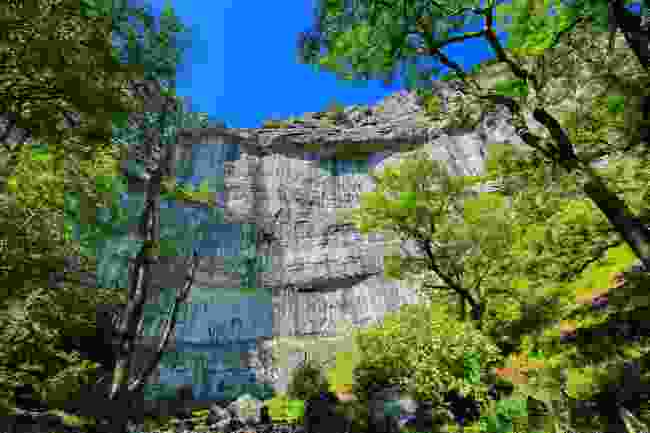 If you’re visiting the Yorkshire Dales National Park, don’t miss out on Malham Cove – a curved limestone rock formation created by a powerful glacial waterfall at the end of the last Ice Age. There’s no waterfall now, but it’s no less impressive. This thing is big – the cliff’s vertical face is about 80 metres, which makes it a popular spot for experienced rock climbers. If you are keen to climb here, it’s probably best to pick a cloudy day. The cliff is south-facing and as a result it can get incredibly hot in the sunshine. With well-maintained paths at the top and bottom, it’s worth the walk up to get the best of both viewpoints. If the cove looks familiar, it’s because it’s been the backdrop for a few TV shows and films, including Harry Potter and the Deathly Hallows: Part 1 and Wuthering Heights. 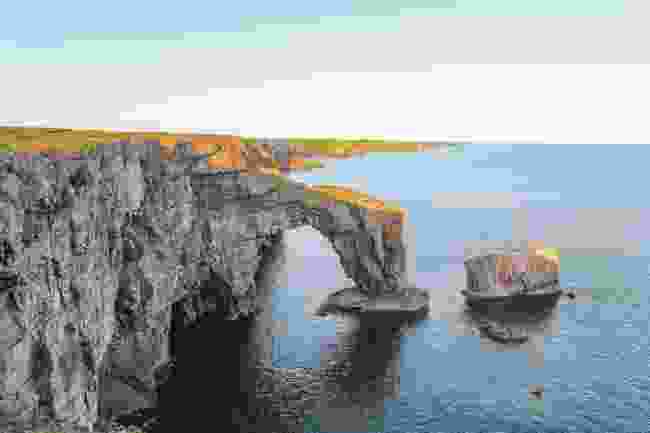 The Green Bridge lies not far from Pembroke and its incredible castle. Similar to Durdle Door in England, the Green Bridge is a huge limestone arch set along Wales’s jagged coastline. It’s less popular, and therefore less busy, than some of the other sights listed here, and still worth a visit. Look out for the viewing platform to properly take in the beauty of this arch. After getting your fill, enjoy a walk east from here to see other pretty spots such as the Elegug Stacks, The Cauldron and Flimston Bay. 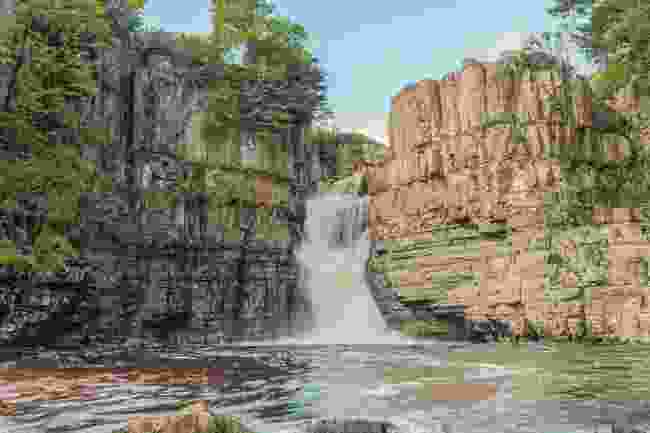 This waterfall’s name is apt, as it really is an incredible force of nature – and one that dates back 300 million years. Located in the North Pennines, it looks like it belongs in a jungle rather than on the border of Yorkshire and County Durham. It’s one of England’s highest waterfalls. To make your way there, park at Bowlees Visitor Centre and stroll through the forest. In cold conditions, the waterfall’s been known to freeze, making for a spectacular sight more at home in northern Canada. 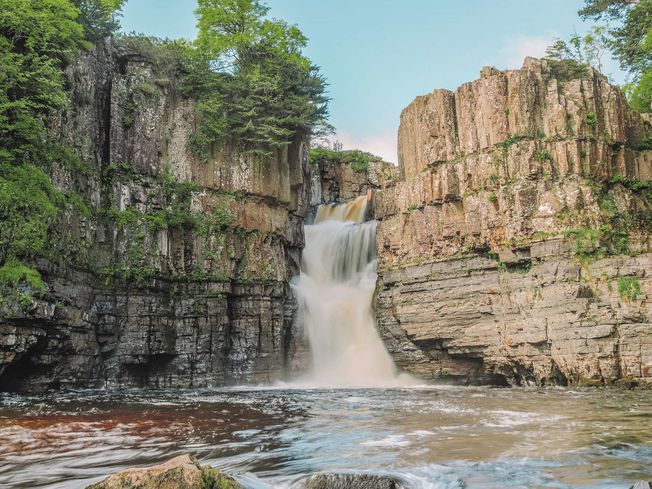 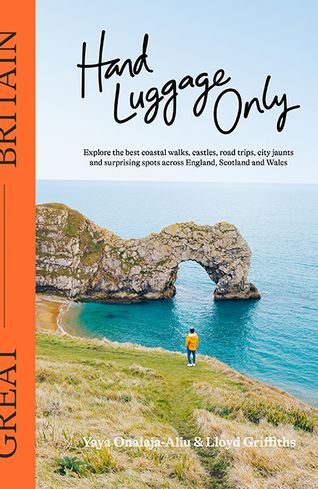