Photo gallery: What did Mykonos look like in the 1950s?

Robert A. McCabe first visited Mykonos, Greece, in 1955. In his new book, he shares beautiful snapshots from those early visits, a stark contrast to how the island feels and looks today... 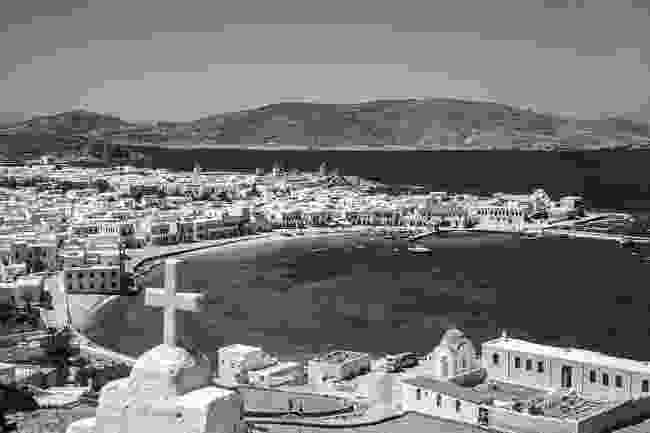 A view of Chora from the chapel of Saint Vassilis. On the bottom right is the Archaeological Museum and next to it is the chapel of The Rose that Never Withers, the Gryparis family church. The Old Port was one of the least protected harbors in the Aegean and was often severely damaged in storms (Robert A. McCabe) 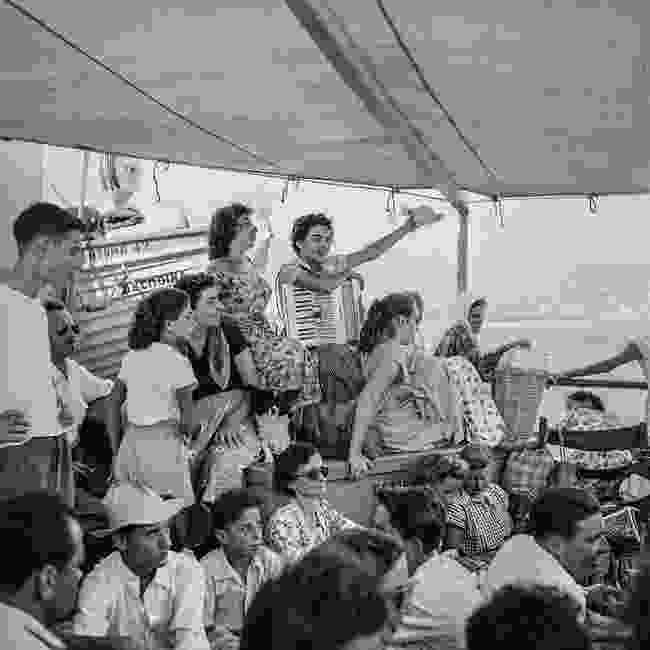 Deck Class on the Despina (Robert A. McCabe)

“The ship was a regular visitor to Mykonos and was affectionately know as “Despinaki” which means “Little Despina”. It was owned by the Foustanos family. Deck Class was fine when the wind and seas were calm, but when the winds rose it was a very different scene as passengers tried to avoid the sea spray and find a solid hand hold.” 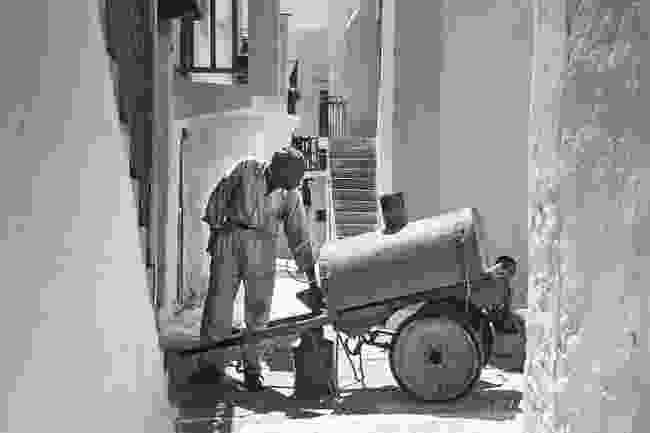 Antonis Kousathanas makes a delivery of water in Chora. Before the introduction of these carts, water was delivered from pairs of buckets carried on each end of a pole that fit on a man’s shoulders (Robert A. McCabe) 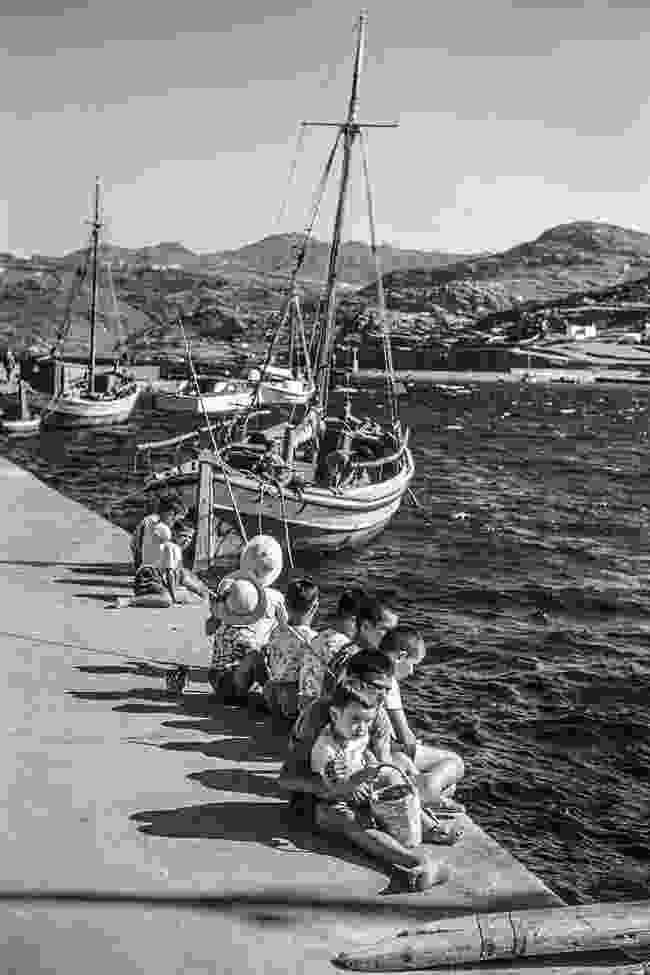 The 13-metre caique Agios Ioannis moored in the Old Port (Robert A. McCabe)

“The 13-metre caique Agios Ioannis moored in the Old Port, tied stern to the quay and anchored at the bow. The angle of the boat reflects the prevailing summer winds. The caique was owned by the Samiotakis family and used to make the run from Mykonos to Ikaria and Samos. It was famous for having been the first caique from Mykonos with an engine.” 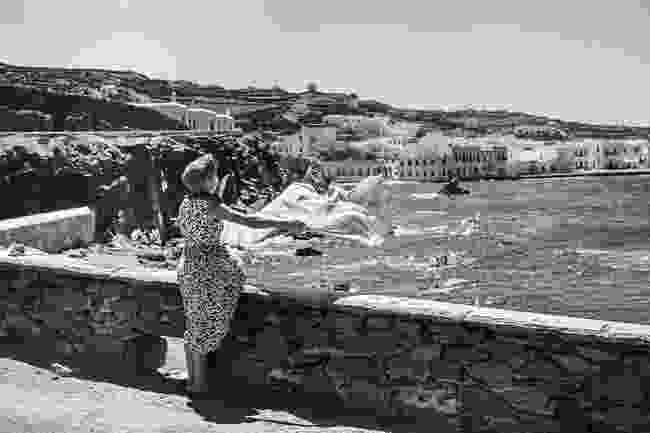 At Spitalia above the stone laundry basin, a woman dries her laundry, either holding it by hand or putting stones on it to hold it in place from the Meltemi wind. The rock in front of Saint Anna’s beach is called Kolokitha which means pumpkin (Robert A. McCabe) 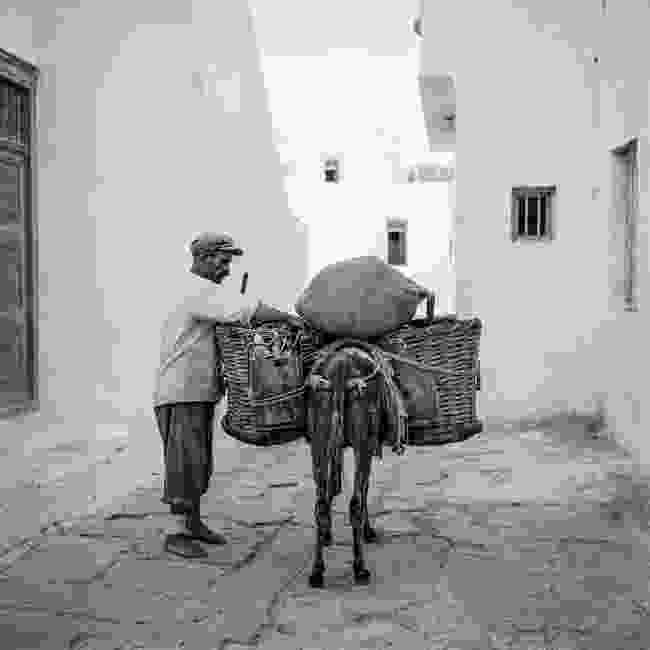 Dimitris Syrianos, the garbage collector in Chora in 1955 (Robert A. McCabe) 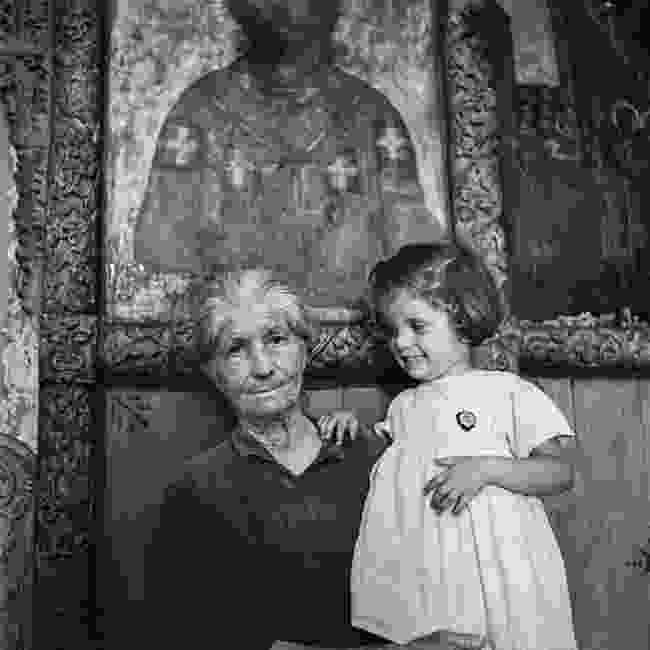 Faces of Mykonos. The Orthodox religion continues to play an important role in the life of the island (Robert A. McCabe) 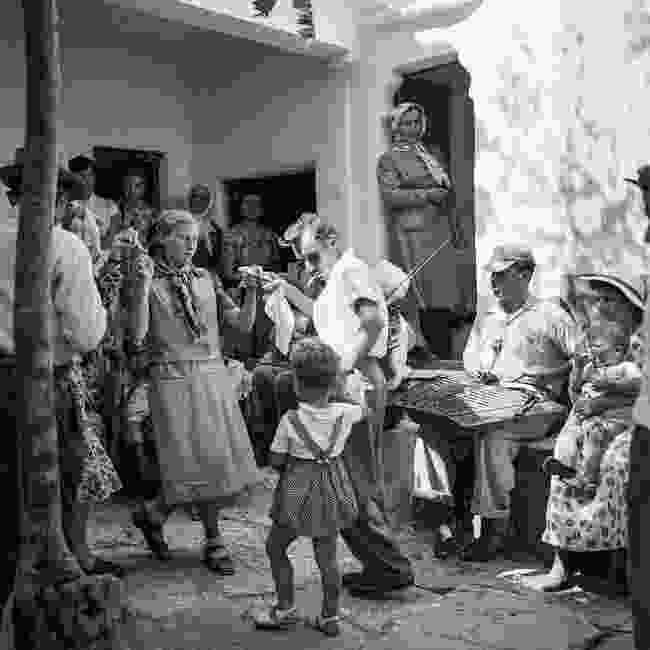 “Michalis Rabias on the santouri. The young woman is Argyro Kypraiou. It appears they are dancing the kalamatianos, a popular folk dance. “Panigyria”, the religious festivals in Mykonos, are still among the most vibrant in the Aegean. Many of the customs and traditions of Mykonos have been preserved despite the massive tourism development.” 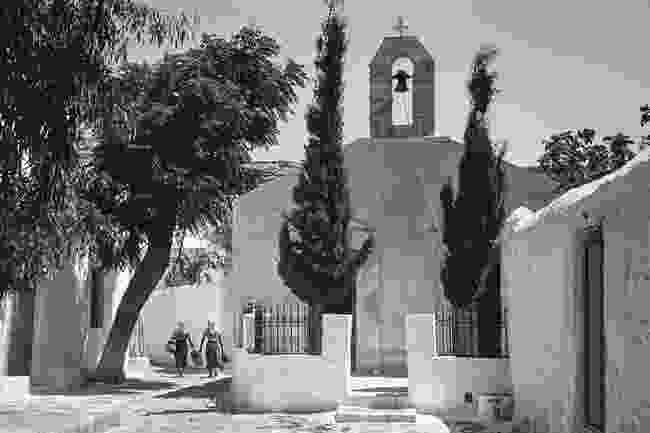 The twin church of Saint Barbara, (door on left behind the cypress tree), and Saint Fanourios, door on right. On the left behind the tree (now gone) is the chapel of Saint George and the Three Wells. Legend has it that if a girl offered a man water from the middle well he would ask her to marry him. The dress of the young women points to their coming from the countryside, perhaps with farm produce for the market (Robert A. McCabe)

“Little Venice, a landmark on the island today, with three young fishermen at work. Nicknamed after the Italian city, the area lines the waterfront with rows of 18th century fishing houses with balconies, built directly over the water.  Nowadays a walkway leads from Skarpa to the bars and restaurants of Little Venice, a popular tourist spot for viewing the sunset.” 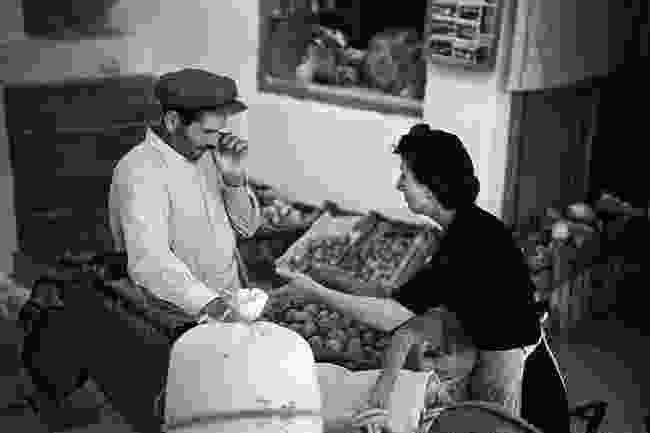 Assimina Kousathana at her family manavis, or green grocer shop, in serious negotiation with a farmer. A few postcards hint at the beginning of a new era (Robert A. McCabe) 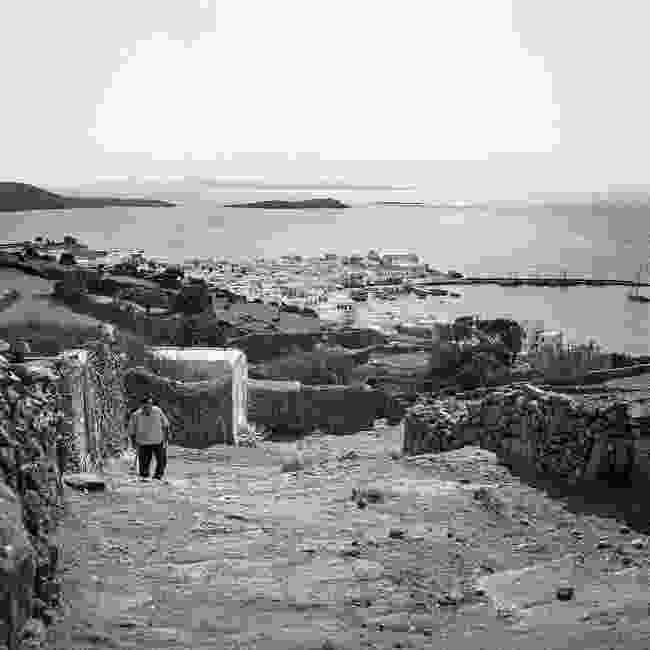 Panagiotis Koukas climbs to his home on the old pathway from Chora to Marathi (Robert A. McCabe)

“The sea shimmers in the afternoon sun. On the left, on the right and in the background the dry stone walls are clearly visible. They are the traditional land dividers in the Greek countryside which were built without mortar to stop soil erosion and define property lines. Each island had its own wall building style. The hillside today is heavily built up and criss-crossed with a web of roads. In the distance, right across Mykonos, is the little island of Baos.” 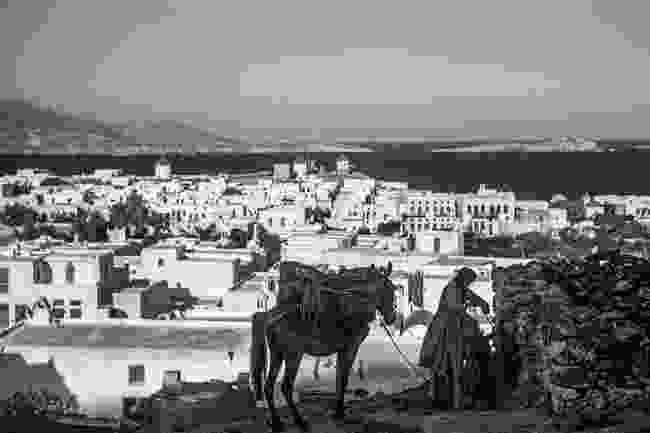 Outside the windmill of Pentaras a woman ties up her mule so she can walk to Chora to shop (Robert A. McCabe) 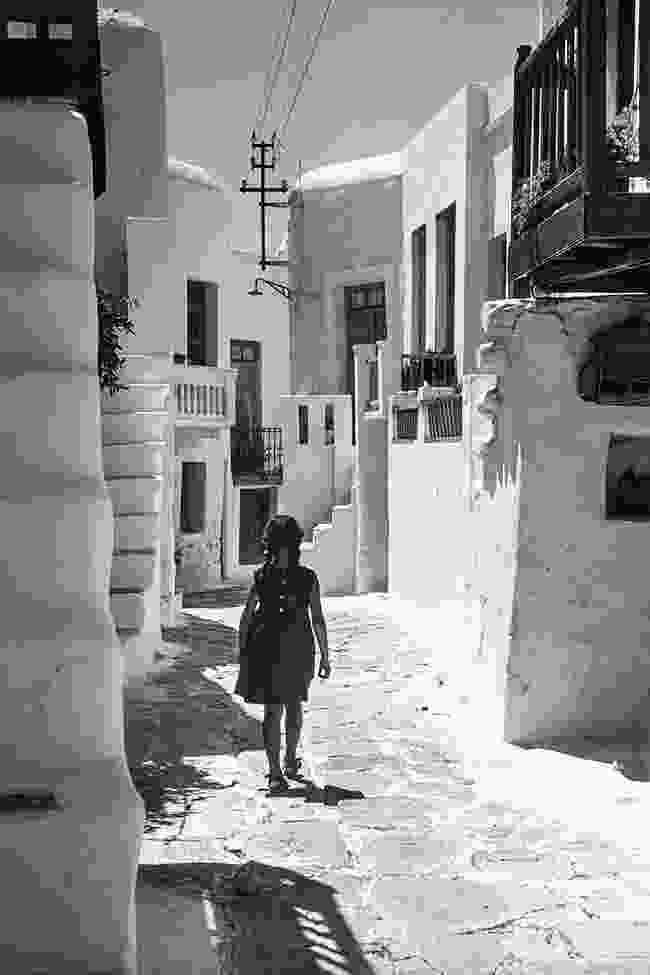 A street lamp and power lines make an appearance here in 1957 (Robert A. McCabe)

“An enterprising Mykonian, Konstantakis Zouganelis, had set up a generating plant, which was subsequently acquired by The Public Power Corporation. It provided lighting in some streets and a few houses until 10 pm. Only when a ship arrived late at night did the lights stay on and it created a festive atmosphere which drew people to the port. Until the late 1960s telephone service was available only at the Chora office of OTE, the national telephone company.” 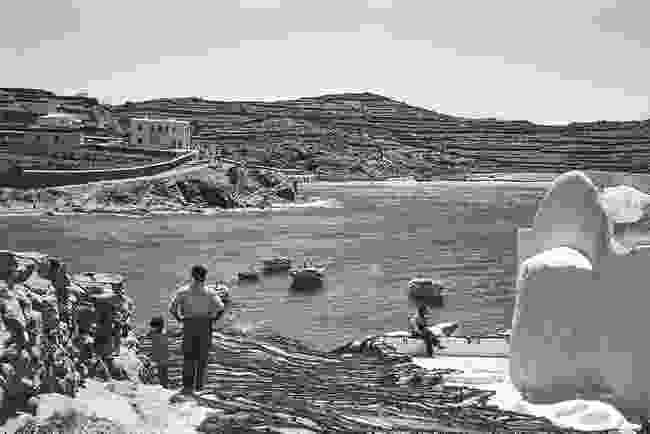 At the church of Saint Charalambos a local family of fishermen dry their nets. Today the entrance to the Xenia hotel is set into the wall on the left and the hillsides have been unmercifully covered with villas. The beach of Megali Ammos or Big Sand is in the distance (Robert A. McCabe) From Mykonos: Portrait of a Vanished Era, published by Abbeville Press, 2019. All rights reserved

Robert A. McCabe’s photographs have been exhibited in the United States, Greece, and France, and have appeared in numerous publications.

In his book Mykonos: Portrait of a Vanished Era, McCabe’s images make it easy to see why Mykonos became such a popular destination is such a short amount of time. His photos perfectly capture the natural beauty and traditional way of life on the island in 1955 and 1957, many of which were used for National Geographic.