Say Aloha to Pacific flavours. Modern, local Hawaiian cuisine fuses cultures, but if you want to experience the the real soul of Hawaii, look no further than traditional luau…

Deeply rooted in tradition and flavoured by a respect for locally sourced ingredients, Hawaiian cuisine combines rich comfort food with a cultural heritage that dates back a millennia, to when Polynesian settlers first set foot on Hawaii’s volcanic islands. They brought along crops from their homelands in canoes, including many of the local ingredients that visitors to the islands will still find in use today, such as taro and sweet potato.

Already highly skilled farmers and fishermen, the first Hawaiians lived in small communities along the island coastlines where they could take advantage of the rich growing soil and seafood available to them. This reliance on locally-sourced ingredients helped set the stage for Hawaii’s culinary traditions today.

However, in the 1850s, the sugar plantation industry began to attract workers from countries outside the islands, such as the Philippines and Japan. Sharing recipes and stories, these workers created the framework for the mixture of flavours and ingredients that characterises modern-day Hawaiian food.

The much-liked fusion of flavours that emerged from this cultural blending became known simply as ‘local food’, rather than ‘traditional’ Hawaiian food, the heritage of which has been kept alive by luau feasts and local eateries. We’d suggest visitors to the island sample as much of both as they can, to taste a thousand years of Pacific history.

5 dishes to try and where to try them 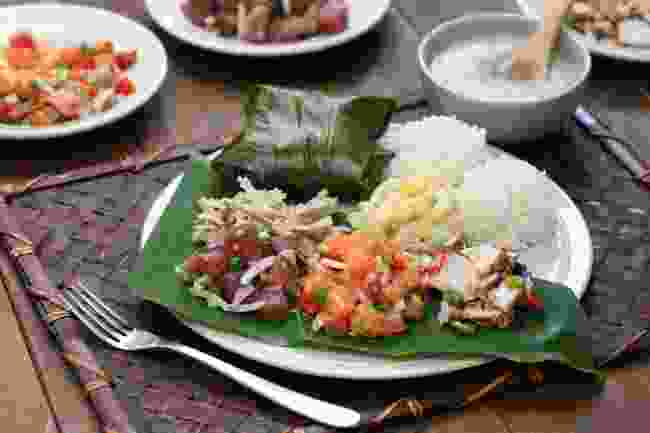 Poke: Although ‘poke bowls’ have recently become trendy outside of Hawaii, you can’t beat the real deal. Hawaiian poke (which roughly translates to ‘cut into chunks’ in the Hawaiian language) consists of bite-sized cubes of raw fish marinated with a mixture of limu seaweed, onion, Hawaiian salt and roasted kukui nut. The fish may range from soft ahi tuna to the much firmer nairagi marlin, but the biggest requirement is that it’s locally caught and extremely fresh. Head to Fresh Catch on Oahu to try its signature smoked tako (octopus) poke or Da Poke Shack on the Big Island for fish that literally came off the boat that morning.

Shave Ice: The ideal complement to a hot Hawaiian day, shave ice is a humble combination of finely shaved block ice and sugary syrup in a rainbow of colours and flavours. Try it at Matsumoto’s on Oahu’s north shore or Ululani’s on Maui topped with Japanese sweet red adzuki beans or chewy pieces of rice flour mochi. 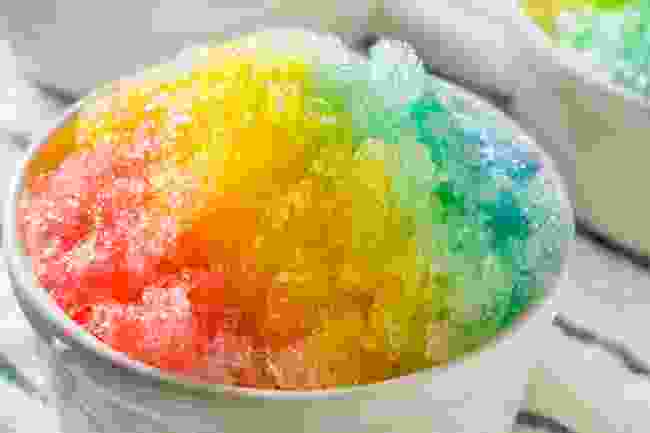 Kalua Pig: Any good luau will have authentic kalua pig on the menu, traditionally made by roasting a whole hog in an underground imu oven all day long. Succulent, salty and packed with that natural smoky flavour, kalua pig is typically a luau’s main event. Historically, kalua pig was saved for Hawaiian royalty, but it wasn’t until King Kamehameha II invited all of his subjects to eat together in 1819 that commoners could taste it. Smith’s Family Garden Luau on the island of Kauai is one of the best places to try it.

Taro: Taro, or kalo in Hawaiian, is an important plant in Hawaii’s history since it was one of the first crops planted on Hawaiian soil. Grab a bag of Hawaiian Chip Company’s original taro chips at any ABC Store for the perfect beach snack. Alternatively, try kalo in its most authentic form: the typical Hawaiian condiment known as poi, made from mashing cooked kalo root into a sticky paste, a tradition that requires its own special tool.

Lau Lau: Lau lau is made of tender pork and salted butterfish wrapped in kalo or ti leaves and steamed to perfection. Historically, the lau lau was placed in the imu oven alongside the kalua pig, so the proteins gain that same earthy flavour. These days, plenty of restaurants can make them in a steamer or pressure cooker. For some of the best lau lau in the state, head to the James Beard Award-winning Helena’s Hawaiian Food on Oahu, open since 1946.

Wet and wild: 5 aquatic adventures you must try in Hawaii