5 evocative travel sketches and the stories behind them 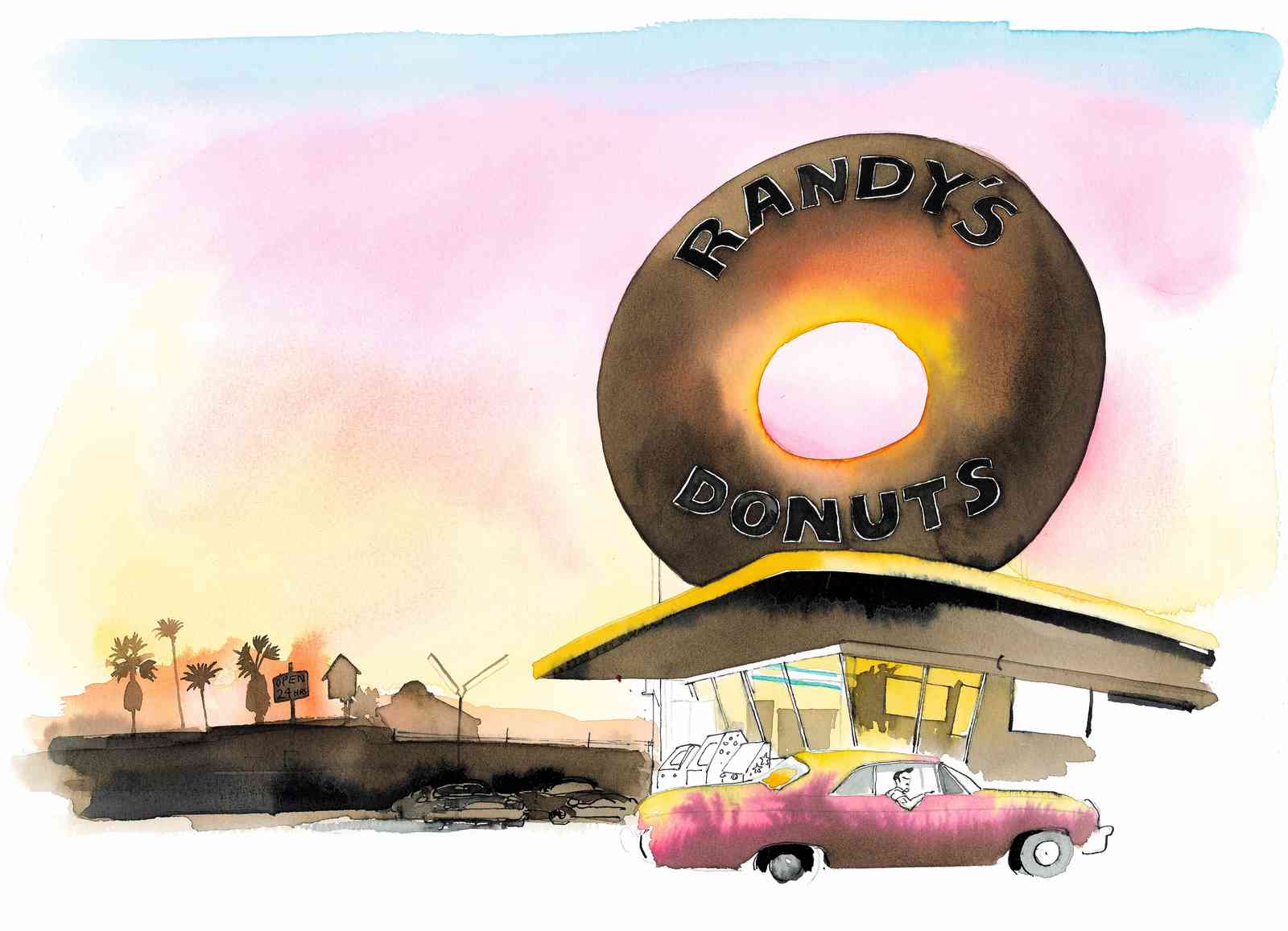 I graduated from the Royal College of Art in 1963 with a Travel Scholarship to America, the land of my childhood dreams.

The first glimpse of the skyline of Manhattan from the back of my yellow cab was a thrill I could never forget. It is an experience I have been lucky enough to repeat many times and the buzz just keeps on buzzing.

This illustration is of Sunset Boulevard, one of the world's urban joys, a slow serpentine evening drive through the whole gamut of LA style. We drive east to west. It's like driving into the sunset.

2: The ancient land of Aztecs and Mayans Although I crossed the Mexican border a few times during my first visit to the US, it was several years later that I visited Mexico properly.

I travelled Highway One down the Californian coast and the Pacific coast of Mexico and on to the drama and colour of Mexico City, then to the ancient wonders of the Yucatan Peninsula, drawing the spectacular ruins of the Olmec, Aztec and Mayan temples.

This is my sketch of the temple of the plumed serpent god, Kukulkan, in Chichen-Itza, the most famous Mayan temple in the Yucatan, down in the southeast of Mexico. I have always admired the Japanese use of watercolour and every trip there has influenced my work.

On this trip, I went to Japan to draw Mount Fuji 36 times. 100 years before, Japanese artist Hokusai had produced his famous series of prints Thirty-Six Views of Mount Fuji. I was asked to do a modern series.

At first, I tried to find the exact locations from which Hokusai had viewed the mountain. Some views were from Tokyo itself but, of course, much has changed since Hokusai’s time. Tokyo has become a city of skyscrapers and freeways. The high rise urban sprawl spreads across the central plain of Japan to the foot of Fuji itself, blocking out many of the famous views.

Then I learnt that Hokusai had re-arranged nature. Geographical studies show that he could not have seen Fuji from some of the viewpoints of his pictures. He also left out unnecessary detail and things he didn't like, and exaggerated things he did, which I think is great.

This sketch is one of my 36 sketches. It is the Mount Fuji Tennis Club.

4: Sweeping sand from the foot of the Sphinx 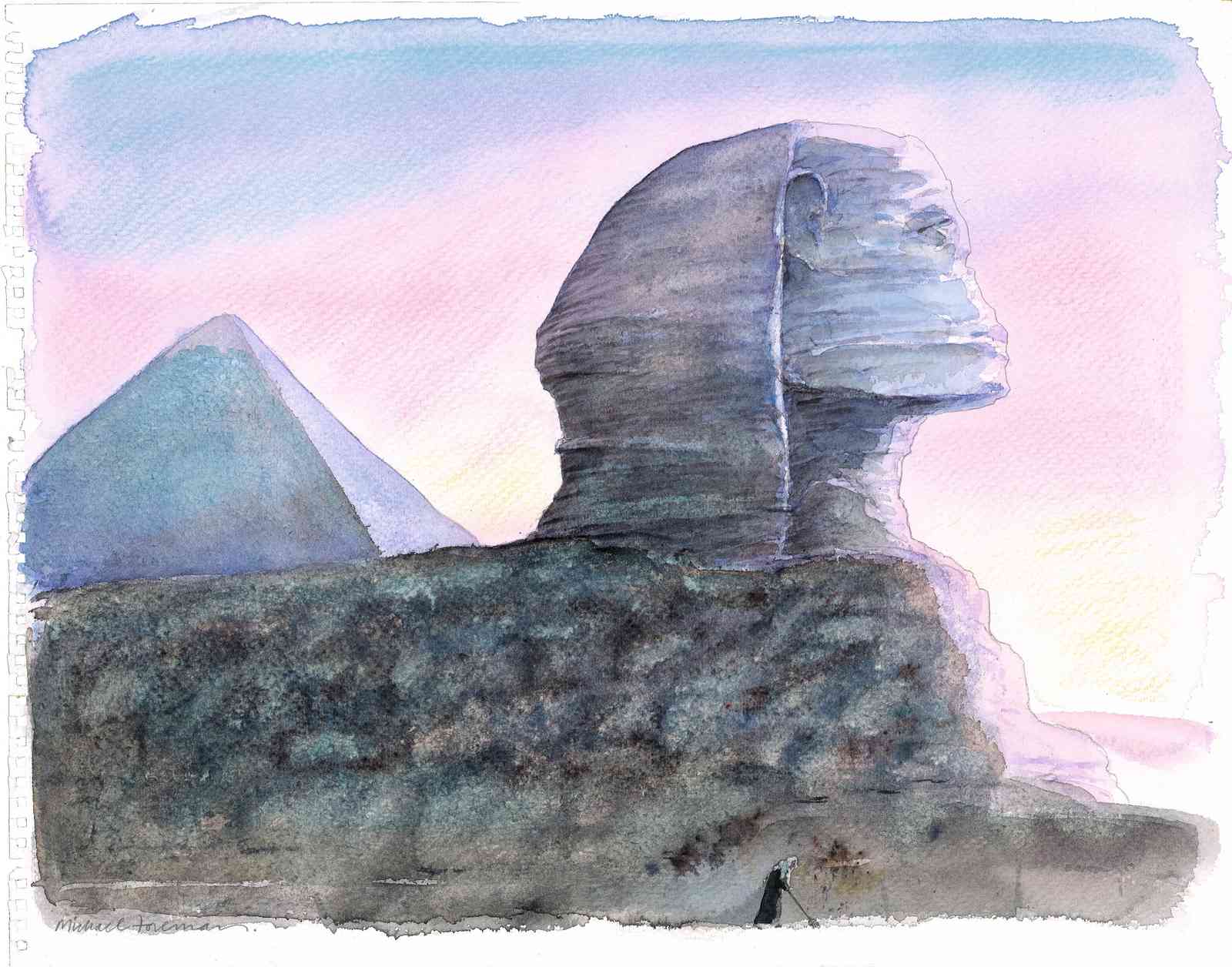 Cairo is one of my favourite cities. The weekly camel market, beyond unpromising railway tracks, is a scene bursting from the Bible. Everything is noise, shouts, snorting camels and bleating sheep. Small boys ride donkeys, Biblical-style, way back on the haunches, at speed, steering with a stick.

This sketch is of a man sweeping sand from the foot of the Sphinx, which is a full-time job. Cairo presses right up to the feet of the Pyramids, but behind them is the vast expanse of the Libyan desert. 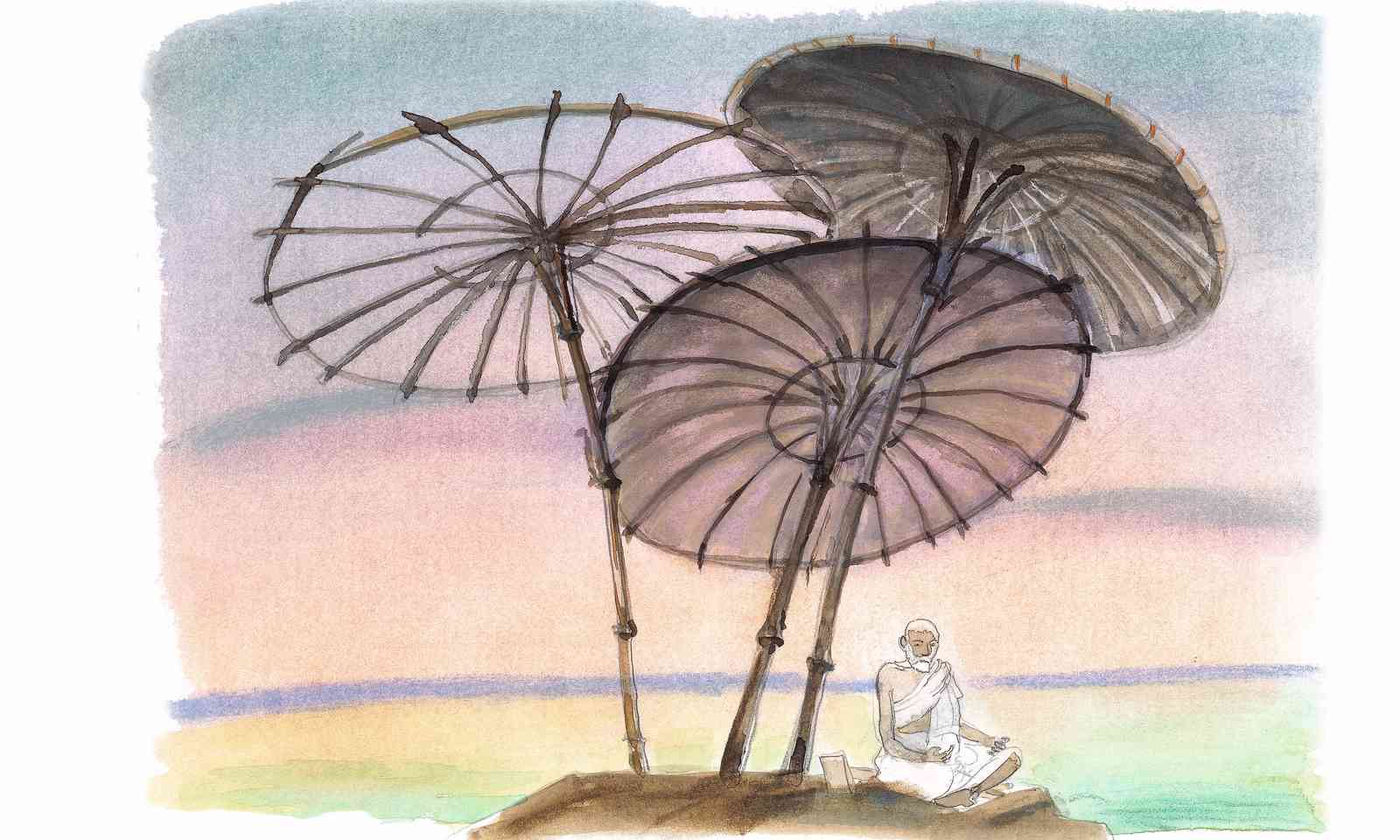 An ancient rickshaw man insisted I would be better off with him than in an orthodox taxi. He took me on an unforgettable trundle through indescribable sights and smells to the River Ganges. There he had a friend, a boatman, of course. He took me on a dusk boat trip, oars dipping slowly into the deep green water, little boys bobbing up and down around the boat.

All along one side of the river, the city side, were ranges of steep steps: the ghats. People flooded down these steps, stripped off and plunged into the river. Ladies in brilliant saris dipped and rose like water lilies.

I remember the heat, the emotion, the multitude of people, the drumming and singing, the ritual of burning bodies. Flocks of vultures on the opposite bank were doing a spot of beach combing. It was probably rich pickings.

The slow inexorable ride home through the hot dark streets was the final sledgehammer to the senses. There were cows all over the place. Beautiful little ladies in wonderful colours walked like princesses through the mayhem, babies draped around their necks.

So, why was I allowing this old man to pedal his guts out to pull me through his own stifling streets to the comfort of my hotel?

Michael Foreman is an award-winning illustrator who has worked with Terry Jones and Michael Morpurgo. His latest book, Travels with my Sketchbook is a collection of sketches, drawings and anecdotes from five decades of travel. It is published by Templar and can be ordered on Amazon now.