In North Yukon’s Big Empty, the frost-cloaked grizzly is undisputed king of the tundra. And in early winter, a few intrepid travellers are allowed to get tantalisingly close, as Brian Jackman discovers...

3 mins
First light at Bear Cave Mountain Lodge. Snow on the ground and an air temperature of 14 below zero. I sat on the banks of the Fishing Branch River with a mug of hot coffee. Beside me was Phil Timpany, the bear whisperer of North Yukon, seemingly impervious to the bone-clenching chill, and Smokey the elkhound, his constant companion.

The lodge is set on a bend of the river, a natural theatre-in-the-round whose backdrop is Bear Cave Mountain itself, bristling with spruce trees and limestone pinnacles. The woods behind us were still wrapped in darkness, concealing the cabins in which we’d passed the night. Now, with the world locked in a deep-frozen silence, the stage was set. The show was about to begin.

Even when no bears are in sight their spine-tingling presence is almost tangible, but we didn’t have long to wait. Smokey, curled up at our feet, suddenly sat up and gave a low growl. “Bear coming,” said Timpany; and he was right.

Out of the mist hanging over the river loomed a ghostly figure, wading slowly towards us in midstream. It was an ice bear, an 11-year-old grizzly known as Stanley. Hoar frost glittered on his back, and with icicles dangling from his ponderous flanks he was every inch the lord of the tundra, an apex predator in his prime.


Out of the mist hanging over the river loomed a ghostly figure, wading slowly towards us

Moments later and he was just a few paces away. It was an extraordinary feeling – like sitting in the middle of a BBC wildlife documentary. I found it hugely reassuring to remember an earlier conversation with Timpany in which he’d stated that, to his knowledge, there had never been a single bear-watching fatality anywhere in North America.

Besides, it soon became clear that Stanley had more important things on his mind. With barely a glance in our direction he strode on downstream. He was hunting for spawning salmon and had evolved an efficient way of catching them. Timpany called it snorkelling, which Stanley demonstrated by ambling along with his head underwater until he spotted his prey, then charging after it in a cloud of spray to emerge with a metre-long fish in his jaws.

Who can fail to be impressed by an animal that can measure over 2m tall when standing upright? Even the grizzly’s scientific name – Ursus arctos horribilis – is enough to send a shiver down your spine. Once they roamed right across North America. Now, western Canada and Alaska are their last great strongholds, with a combined population of around 50,000, but even here they are threatened and vulnerable.

You can observe grizzlies at a dozen well-known sites in British Columbia, and even more in Alaska, where wildlife watching is a multi-billion dollar business. But none measure up to Bear Cave Mountain. Elsewhere in North America, bear watching often takes place from the safety and comfort of wooden stands, but not here. With Timpany as your guide you watch with your feet on the ground as the grizzlies shuffle past just a few paces away. 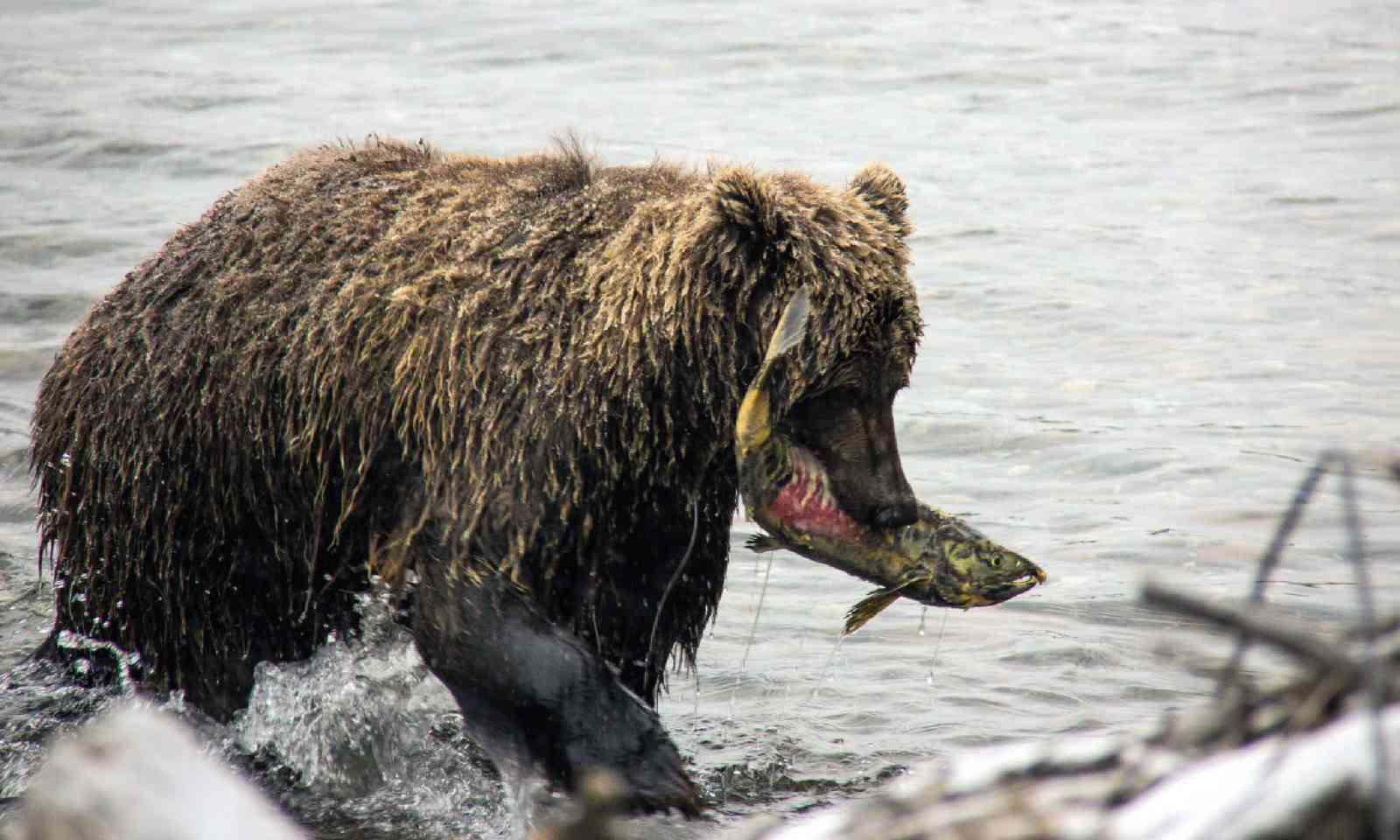 North Yukon is Canada’s Big Empty and the park is unbelievably remote. To reach it I flew first from Vancouver to Whitehorse and then on to Dawson City, founded on the wealth of the 1898 Klondike Gold Rush. From here the only way to reach the lodge is by helicopter, an unforgettable low-level flight across 650km of pristine wilderness.

Even if you are a seasoned traveller nothing prepares you for the sheer vastness of the sub-Arctic landscape. For two hours we clattered across endless vistas of peaks and permafrost, hedgehopping between the razor-sharp pinnacles of the Tombstone Mountains to be confronted by a desolation of boreal forest and snow-covered tundra scribbled with iced-up creeks and caribou tracks running all the way north to the Beaufort Sea.

For the Vuntut Gwitchin – the ‘People of the Lakes’ – this is hallowed ground, which is why coming to Bear Cave Mountain is such a rare privilege. To them it has always been known as Ni’iinlii Njik – ‘where the fish spawn’; it is a land held sacred, where the survival of the salmon is all-important and visitor numbers are strictly limited to no more than four guests at any one time.


Don’t come expecting five-star accommodation. What you get is backwoods basic in simple twin-bedded log cabins. There are wood-fired stoves to keep you warm, and Timpany – who does all the household chores as well as guiding – conjures up sensational steaks and casseroles in the communal kitchen. But the real luxury is the best bear watching ever, closer than you ever dreamed of, getting to know the animals as individuals under the watchful eyes of the Yukon’s most charismatic guide.


A vision in white

“Water quality is the key to it all,” Timpany explained. That is why 35,000 chum salmon swim up the Fishing Branch River each year, a 2,400km odyssey from the Bering Sea, to spawn and die in the shadow of Bear Cave Mountain. Thermal springs bubbling up through the limestone bedrock oxygenate the gin-clear water, creating perfect conditions for the salmon eggs to thrive.


Every day, as they wade into the river, a dramatic transformation takes place...

While the rest of the Yukon is locked in winter’s icy grip, the Fishing Branch River still flows freely. The chums are also sometimes known as dogs because of the canine fangs the males acquire at spawning time. They grow to a length of about a metre – a perfect meal for a hungry grizzly – and it is when the fish swarm up the river with the onset of winter that the bears arrive to fatten on this annual feast.

Every day, as they wade into the river in the sub-zero temperatures, a dramatic transformation takes place. In minutes they become ice bears as the water freezes on their shaggy coats, creating a unique spectacle that attracts photographers and wildlife enthusiasts from around the world.

As many as 40 or more grizzlies come every year and regularly hang out around the lodge, leaving their broad footprints on the snow-clad boardwalk leading down to the river. Ranging in colour from creamy silver through salt-and-pepper to almost black, they all have the humped shoulders and low-slung necks that are the grizzly’s defining features. Most of them, including Stanley, are as familiar to Timpany as old friends.


Weighing up to 360kg and sitting at the top of the food chain, grizzlies have no natural enemies and thus have no fear of humans. However, as Timpany was at pains to point out, each bear is an individual whose responses may vary. “Some never become tolerant of people but dealing with them is easy,” he said. “Rule one is always to let the bears decide how close they want to come. Rule two is never ever retreat. Grizzly bears are predators and will react immediately if they see you running.”

That is why, although Timpany never goes anywhere without his 12-gauge pump-action shotgun, in all his 22 years at Bear Cave Mountain he has never had to use it. “They are so intelligent and are really not interested in causing trouble,” he added.


Being with the bear man

Spending quality time with this extraordinary man is half the fun of being here. When Stanley had strolled on up-river, Timpany told me about his life in grizzly country.

As a young man he started out as a guide, tracking grizzlies along the Taku River for wealthy European trophy hunters who would pay thousands of dollars to bag a bear. “They had no respect for the animals they killed,” he said. “Whenever they shot a bear they would walk up and kick it and say: ‘I got you, you sonofabitch’.” 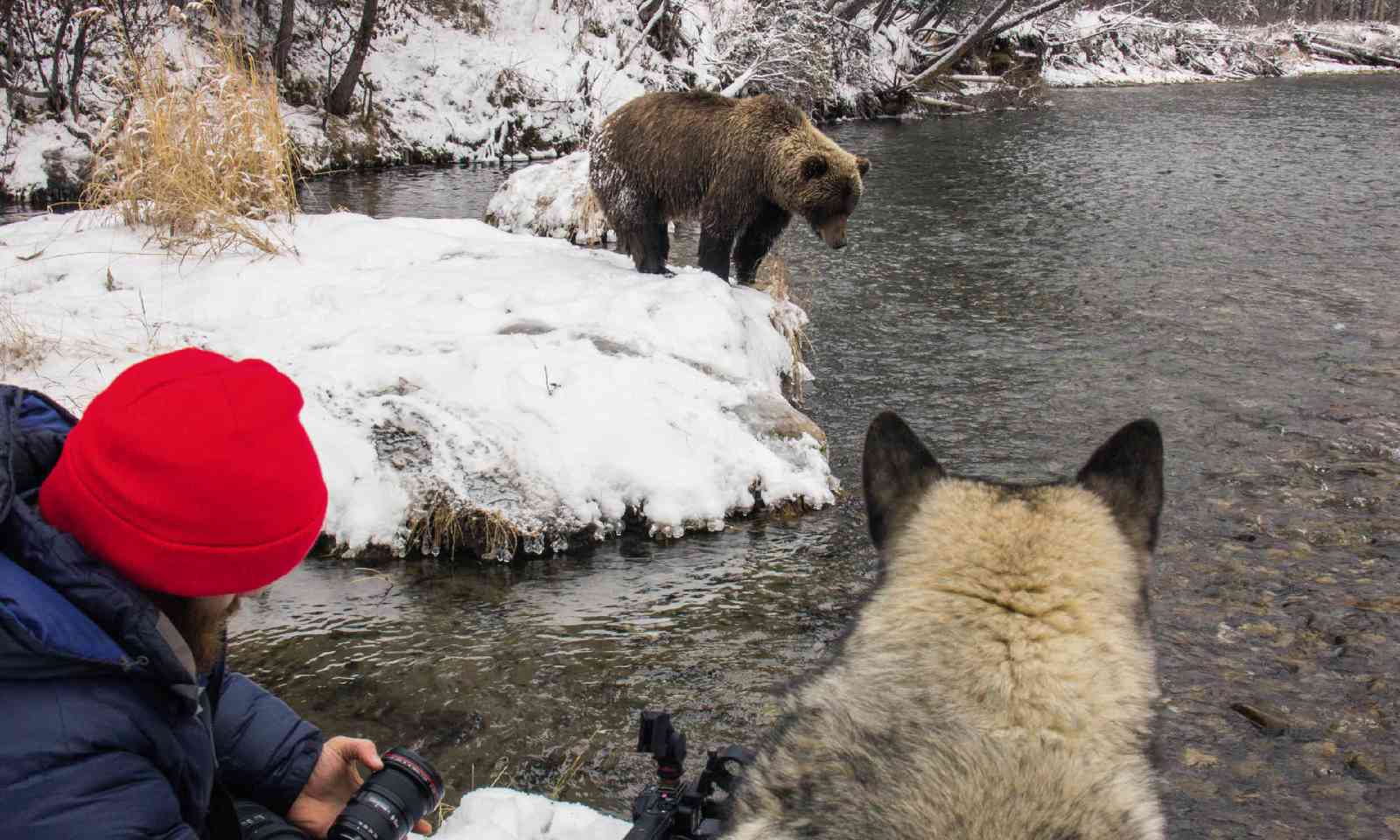 In the end he got sick of the bloodletting and embarked instead on a new career, studying chum salmon in the Yukon backcountry where he once spent an entire winter wholly alone. “I can honestly say it was the best winter I have ever experienced,” he told me. Today, at the age of 60, having spent more than 2,000 days in the company of grizzlies, he has come to know them better than anyone.

For much of that time his only companion has been his dog, Smokey. “He will be 11 years old next April and saw his first grizzly when he was eight weeks old,” said Timpany. “Elkhounds are hunting dogs and so Smokey is very comfortable in the woods. He is invaluable to me in his role as chief sensor, letting me know when a bear is coming, but even he can miss them if the wind is not right and the bear is quiet.


“The most important thing when having a dog in bear country is that under no circumstances must it be allowed to approach a bear unless you are under attack. You have to work as a team, make sure the dog knows you are working with him – and him with you.”

Timpany’s unique relationship with bears is based on mutual respect, exploding the grizzly’s fearsome reputation as a natural born killer. “The whole ethos behind wildlife management involving bears is 100 years out of date,” he declares. Every year in the Yukon, an average of around 86 bears are shot “for fun” as he puts it, and another 350 grizzlies are also killed by trophy hunters in neighbouring British Columbia. “We are at war with the grizzly,” he said, “and the grizzly is losing.”


The water was swift and shallow, its waters crammed with spawning salmon

For too long, grizzlies have had a bad press, and it was partly to counter that image that he helped to establish Bear Cave Mountain Lodge. “I wanted the world to see them as they really are,” he said. “I wanted to bring people close to bears so they learn the true nature of these extraordinary animals and become ambassadors for them.”

Early the next day we were back by the river, watching the bald eagles that had gathered in the treetops. Some mornings, said Timpany, he sees moose by the riverside; wolverine, too. At night, when the northern lights swirl and flicker overhead, he listens to the eerie harmonies of wolves in the spruce forests.

The water flowing past us was swift and shallow, its clear waters crammed full with the wavering shapes of spawning salmon. Wearing borrowed boots, I waded across, trying not to lose my footing on the pebbly bed.


On the other side we found a vantage point and settled down to wait. The ground I was sitting on was iron hard and everything – dead leaves, withered grasses, the willow thickets at our backs – was furred with ice crystals. With each passing day the Arctic winter was tightening its grip. Soon the blizzards would come and the season would end. But for now and awhile yet there was still time for the grizzlies to fish, piling on the pounds before they clambered up the slopes of Bear Cave Mountain to hole up in its honeycomb of sheltered caves until spring.

Suddenly, from the woods downstream where the river bends, a flurry of ravens and Canada jays erupted as a mother grizzly headed towards us with a yearling cub like a child’s outsize teddy trundling along behind. It was a bear that has turned up every winter without fail for the past 23 years.

“Hi Mrs Tucker, how’re you doing?” said Phil Timpany softly as she splashed past with a rolling swagger no more than three paces away. “It’s always a pleasure to see these old matriarchs,” he said. “They are such forgiving animals, and it’s only when you enter their world that you realise what a peaceful coexistence they enjoy.”