Lyme disease: what you need to know

Could you catch Lyme disease? Our resident doctor assesses a real-life case study, looking at what went right, what went wrong and what you need to know if it happens to you...

Victoria McGibbon: “My west Dorset allotment is close to a National Trust area supporting many deer, which visit for a ‘feed’. I spotted a number of tick bites on my legs during that summer, but didn’t detect the one on my breast.

“Initially I noticed a rash on my left breast, followed by flu-like symptoms. I experienced itching on the back of my neck and head; the top of my head became hot. At first my rash was diagnosed as a fungal infection; it was treated with creams for about four weeks, but this didn’t work. I was then given co-amoxiclav, a penicillin antibiotic.

“As the rash spread, I was convinced I had Lyme disease. It took more weeks, tears and insistence to get a blood test. This confirmed that I had Lyme disease. This was six weeks after the rash first developed, by which time it was extensive, with the typical bull’s-eye appearance, common to Lyme. Subsequently I was treated with doxycycline. After 12 weeks, I’m now fully recovered. Fortunately it did not stop me being able to work.” 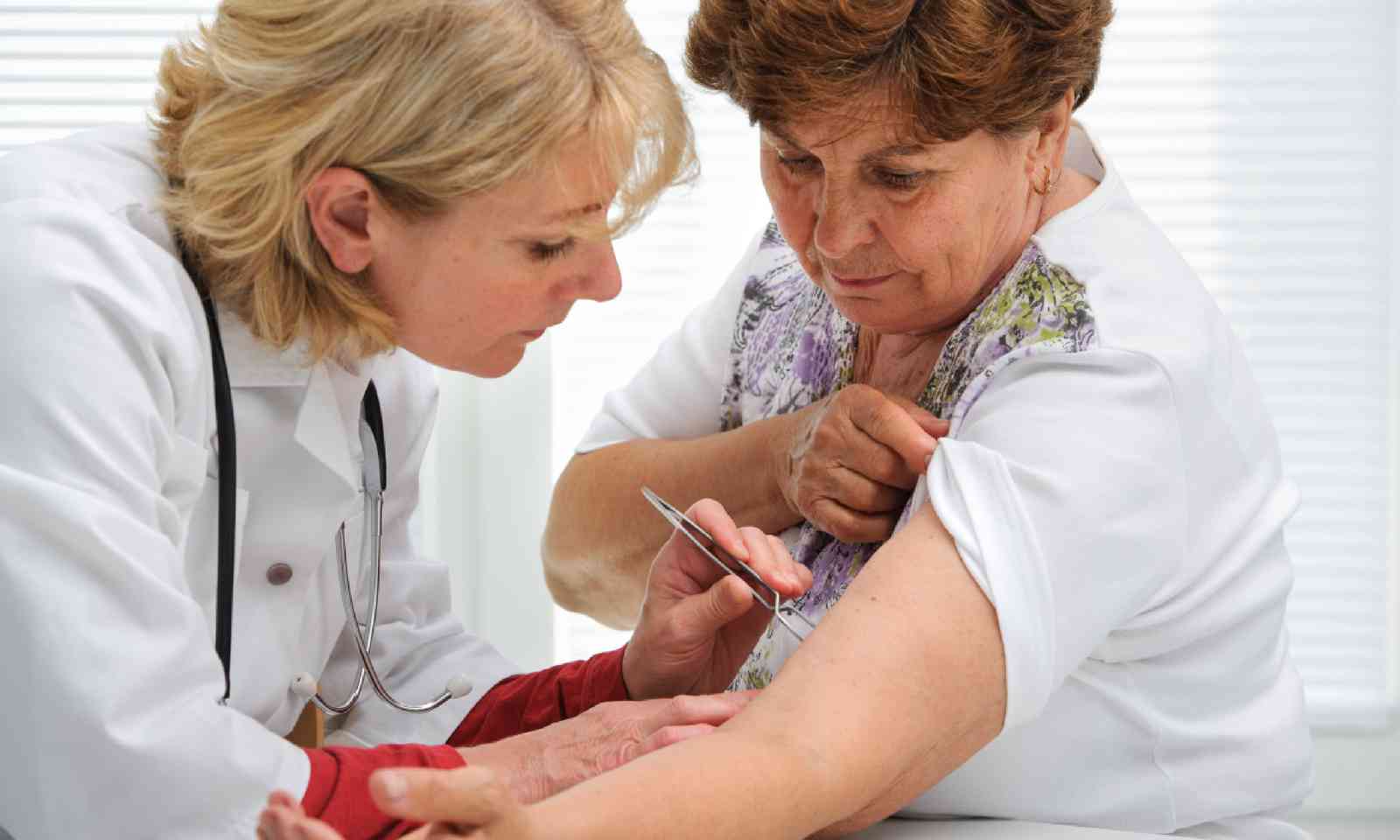 Doctor removing a tick with tweezers from skin of patient (Shutterstock)

Lyme disease is on the rise in the UK – Public Health England estimates there could be up to 3,000 new cases here every year. Here’s how Victoria might have avoided the infection.

Forewarning Lyme disease is a risk to those who spend time outdoors. The ticks that transmit it like places where deer or sheep graze; border habitats between woods and meadows; and sparsely wooded forest paths. Lyme is thought to be present wherever Ixodes ticks are found; in Europe the disease seems to be a milder strain than the American version.

When a tick senses a warmblooded being, it climbs aboard and searches out a cosy corner. If the victim is human, the tick will often settle in a hairy spot or a place where clothes become tight. Then it bites (often painlessly), cements its mouthparts to its host, and gorges: a tick might start the size of a sesame seed and swell to the size of a kidney bean.

It isn’t possible to immunise against Lyme disease. A US vaccine was withdrawn in 2002 as it appeared to cause arthritis. However, there’s a lot Victoria could have done to keep ticks off in the first place. She could have proofed her clothes with the persistent EX-4 insect treatment, tucked trousers into socks, or even worn EX-4-proofed gaiters. It is also possible to spray trainers and boots with repellents. But beware – DEET ruins plastics.

The good news is that the chance of developing Lyme after a single bite is probably in the order of only 1-2%. Victoria experienced multiple bites so her risk increased. The longer the tick feeds, the more likely disease will be passed on. Ticks usually need to be attached for more than 12 hours for Lyme to be transmitted.

Victoria should have checked her body after each session in the garden or each rural walk (the most convenient time to do this is in the shower). Run your hands over all of the skin, paying special attention to the groin, armpits and under breasts; ticks will be felt as a new protuberant ‘mole’. Avoid squeezing the tick as far as possible; instead, pinch or scrape it off the skin. Tick removers are useful. Flooding the bite site with spirit afterwards reduces the chance of infection. 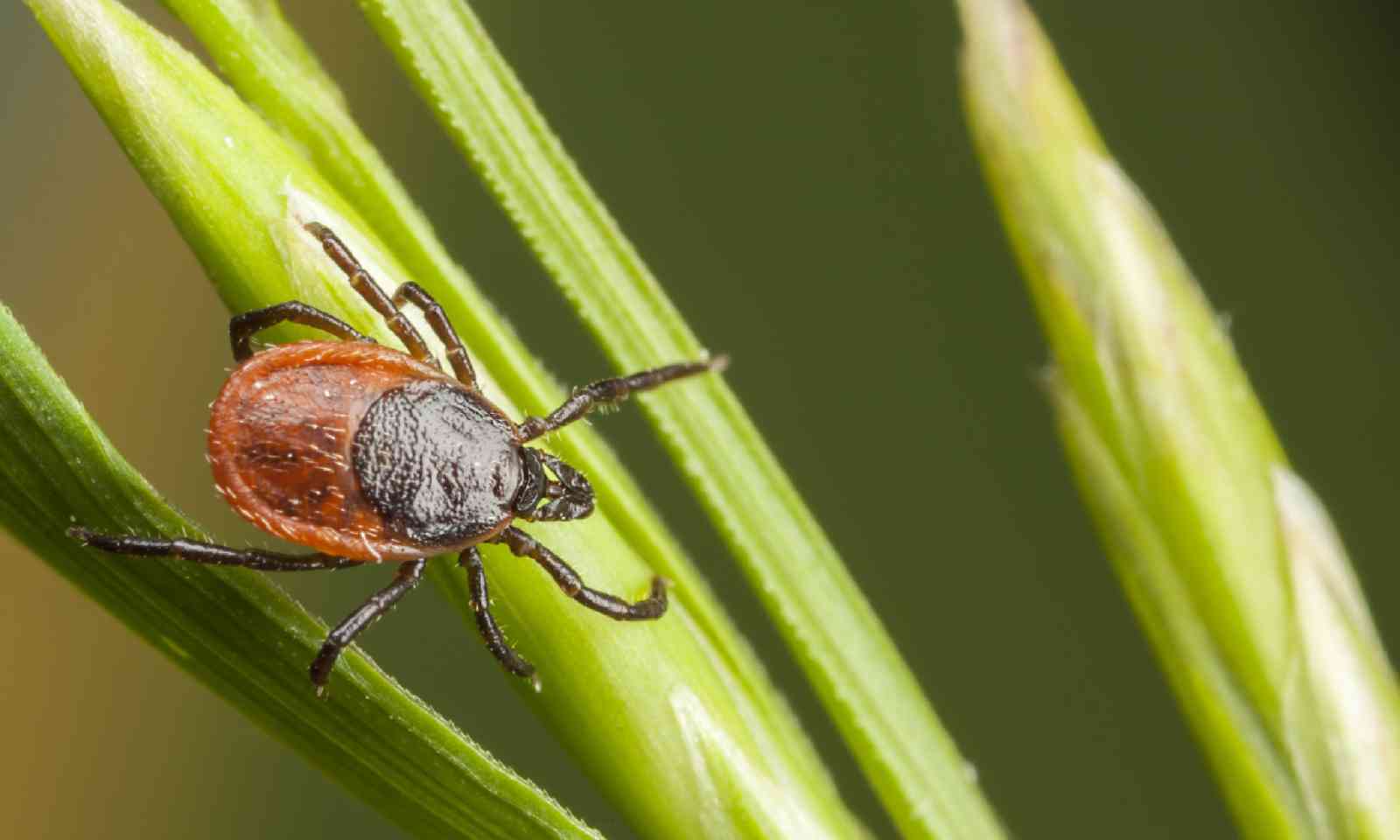 A tick on a plant straw (Shutterstock)

Seven to ten days after a person is bitten, a slowly enlarging red patch, ring or weal usually appears (in 70% of cases); this is the shape of a bull’s-eye and looks like it should be itchy but generally isn’t. The weal spreads to a diameter of about 15cm (over a couple of weeks, and may persist for months or disappear after a few weeks.

Commonly (in 80% of cases), Lyme victims experience aching joints, fever, sore muscles and headache. Most early symptoms are fairly mild and some studies suggest that one-third of victims get no early warning signs at all.

If you experience a persisting problem it’s worth – as Victoria did – returning time and again to the GP surgery, especially if there is reason to suspect Lyme disease. The Lyme blood test can help with diagnosis but it isn’t always positive, especially if it is done too soon: it takes some weeks for antibodies to be detectable. Ideally, Lyme should be treated within four weeks of the bite.

Some physicians may treat ‘blind’ while others will refer to a specialist. Victoria’s co-amoxiclav might have helped if it had been given at high enough dose for long enough. Long-term consequences are rare, especially in cases treated in the first month or so; they are also unusual in people bitten in Europe.

Adults are usually treated with doxycycline antibiotics (twice daily for at least ten days). People with joint aches may be treated for a full month. Children usually need a high-dose course of amoxicillin. If you’ve been bitten overseas, report any symptoms to your doctor as Lyme is only one of many tick-borne infections. European tick-borne encephalitis is often life-threatening. But, whatever the disease, prompt tick removal is protective. Check each evening.

0hrs: Cover up and wear repellent-treated clothing before venturing into tick-risk areas.
1-16hrs: If you have been in a tick-risk zone, check your body for ticks when you shower; feel for blobs that look like moles, especially in crevices. If you find a tick, remove it as soon as possible without use of naked flames or chemicals. Pour gin in the wound.
7-10 days: If you notice a red patch appear on your skin and begin to spread, possibly accompanied by aching joints and fever, book an appointment with your GP. Tell them that Lyme could be a possibility; if you have been overseas, tell your doctor where. Be persistent and consult again if worried or symptoms continue.
10-28 days: If Lyme is suspected or diagnosed, take a long course of antibiotics.

Dr Jane Wilson-Howarth has removed many ticks; her blog is at wilson-howarth.com


Main image: Closeup of a tick on a plant straw (Shutterstock)