Learning to cook in Chiang Mai

Our featured blogger, Max Burt, is no Jamie Oliver, but after taking cooking lessons in Northern Thailand he can now knock up a mean Kao Soy

Nobody who knows me well would accuse me of being a budding Jamie Oliver. I am to kitchens what Genghis Khan was to medieval nation states. A defiler. An intruder. A spiller of blood (mostly my own). So when Nicole suggested we sign up for Baan Thai’s cooking class it was with some trepidation that I allowed myself to be talked into it. I can barely cook most Western food and now I’m supposed to try my hand at Thai food? I don’t think I’d experienced such acutely nervous anticipation since the days of sitting exams in uni. It kind of felt like an exam. I would be tested. People would be watching. And I would suck.

Upon arrival, we were divided into two groups of six-or-so and we were each told to select four Thai dishes to prepare. Nicole and I selected Pad Thai, spring rolls, Tom Yum, and Chiang Mai Noodle (Kao Soy). We were briefly introduced to the others, then we were taken on a whirlwind tour of the local food market so we could see and learn a little about some of the ingredients we would be using. Then it was back to Baan Thai to prepare our first dish.

First up was Pad Thai. Those of us who’d selected this dish were shown to work stations where all of the ingredients had been prepared and arranged in little bowls to one side of our own giant wok set atop a gas burner. Our instruction consisted of our instructor cooking the dish in front of us (faster than I would have thought humanly possible) and then rattling off a blitzkrieg of instructions, with no repetitions, for us to osmotically absorb and carry out flawlessly.

In my rapidly mounting panic I absorbed next to nothing and formed the profound impression that everything had to be hurled into the wok as rapidly as possible, with some water poured on it, followed by a few artful flourishes of the spatula and ta-da – you’ve got Pad Thai. I was wrong. My Pad Thai fortunately looked like everyone else’s so I was spared some embarrassment, but I have no idea what it tasted like. Not Pad Thai, that’s for sure. 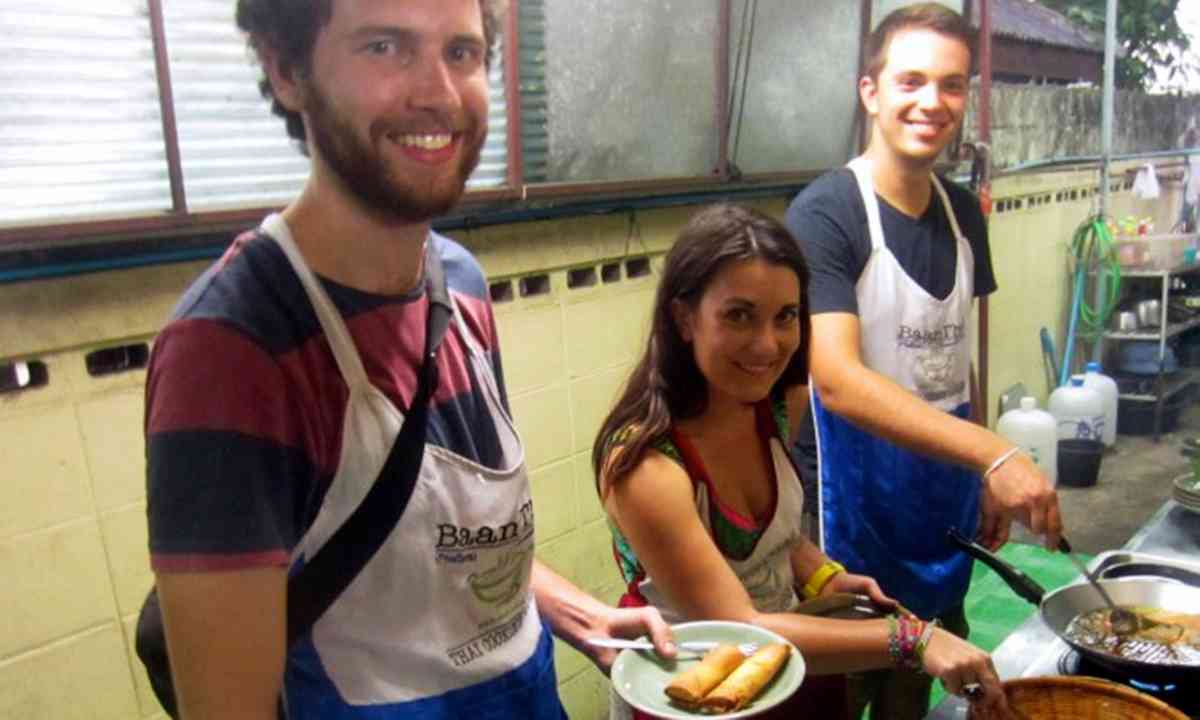 Next up was our soup dish. We made Tom Yum, and the instructions were thankfully much easier to follow. My Tom Yum actually tasted like Tom Yum! After my Pad Thai experience this was a game-changer. This was like scoring the winner after a catastrophic early fumble. Confidence was sky-high. Perhaps I’m not a culinary klutz? Should I be considering a career in cooking? Then came the spring rolls.

The pièce de résistance was our Chiang Mai Noodles, and on this dish I really came through. The instructions were simple and easy enough for me to follow, and my final product was surprisingly delicious. I would make this dish again at home and, weirdly, I think I’d actually be able to replicate my success.

So, while not a raving success, my cooking class experience wasn’t the unmitigated disaster I was dreading either. I’m looking forward to trying some more classes as we travel to other destinations, and even making some of the dishes I learned as soon as I’ve got a kitchen to work with.

We're a duo of professional copywriters who met while working for the same Auckland-based company in 2013. After each putting in a year or so of truly superlative effort, we felt we'd earned a break from the world of open-plan offices, defunct air con, and company-wide reply-all email chains about the blockage in the third stall from the left in the women's bathroom. We hopped a flight to Thailand in June and have been roaming around Southeast Asia ever since.