So you've had a go at skiing and snowboarding. Why stop there? From snowmobiling to Nordic skating and dog sledding, these 10 icy escapes will help you plan your next snow-filled adventure... 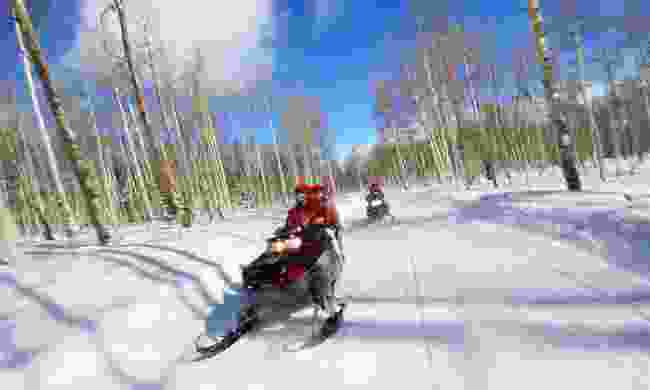 Tearing through the wilderness on a snowmobile might not be the most serene way to commune with nature, but if you want to cover 60–100km a day through some of the remotest wilderness around, there are few more practical ways to travel. Even out in the wild there are speed limits and other rules, and a full driving licence is typically required, but the reward is freedom. It’s a genuine privilege to have the chance to explore the Bridger-Teton National Forest in the backcountry of Yellowstone National Park or go on a wild moose safari in Swedish Lapland.

Give it a try: Most snowmobile trips are one-day affairs. For longer safaris, the stark tundra of Svalbard’s Spitsbergen is your playground (Feb–May), with multi-day trips from Longyearbyen to explore glaciers and spot polar bears, reindeer and Arctic foxes. 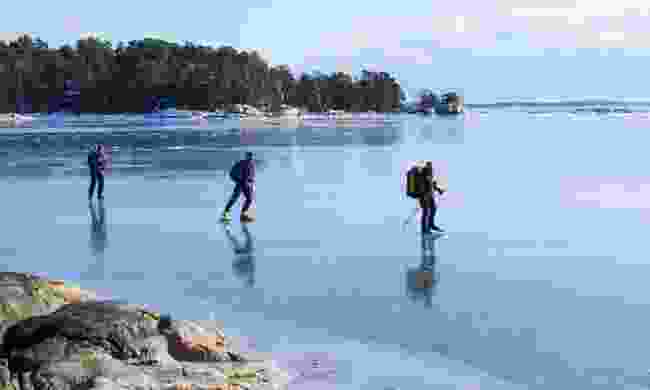 Long-distance ice-skating first emerged in Sweden, a land of vast lakes skirting evergreen boreal forests. In winter, it’s a quick and scenic way to get around: even novices can cover around 25km a day. While it’s not an activity you should try solo, all you need is a guide, the right skates (with 50cm-long blades) and some safety equipment such as ice claws or ‘safety nails’ to help you climb out of any broken ice. Beyond Sweden, the options are surprisingly varied, ranging from inner-city tours of Amsterdam’s frozen canals to skating the island archipelagos of the Baltic Sea between Sweden and Finland.

Give it a try: Head off on a multi-day wild-skating tour of Sweden’s Ostergotland and Sodermanland counties, about two hours outside Stockholm, covering around 125km of richly forested lake country (Jan–Mar). 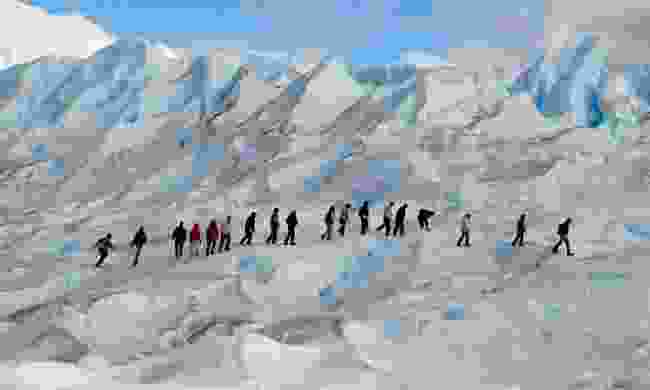 Glaciers – compacted slabs of snow and ice – can be beautiful, with Patagonia one of the best places to see them. Trek the five-day W Route in Torres del Paine NP to the 14km Grey Glacier, or take day walks from El Chalten into Argentina’s Los Glaciares NP where a dozen glaciers are within easy reach. In Alaska, which has some 100,000 glaciers, forests of sitka spruce lead you to the ice caves of the 13km Mendenhall Glacier, while a helicopter trip up to New Zealand’s Tasman Glacier on Mount Cook lets you hike a 27km ice world in the sky.

Give it a try:  Tour the caves and tunnels of Iceland’s Vatnajokull glacier (Europe’s largest ice cap), descending into a crystalline underworld of blue ice, with glacier guides to walk you through a landscape that covers eight per cent of Iceland’s landmass. 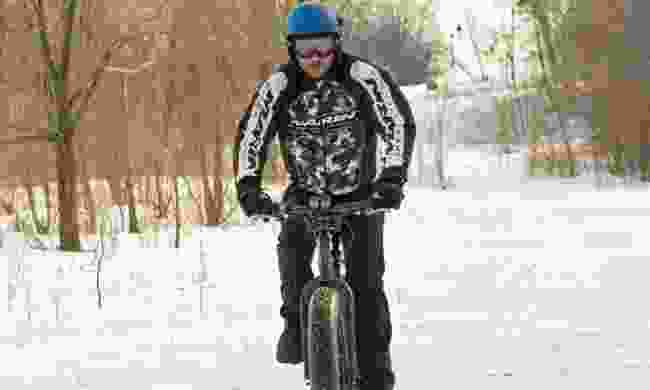 A fatbike could earn you some scorn on the slopes from traditionalists, but they’re great for non-skiers. Essentially, they’re just bikes with low gears and chunky, 10cm-wide tyres (when riding on ice, opt for studded tyres). Electric versions are available for tougher ascents. Hugely popular in the US, fatbiking is catching on fast in Europe. Plenty of traditional winter hiking and cross-country skiing routes are now fatbike-friendly, from Andermatt in the Swiss Alps to the forests of Geilo, Norway.

Give it a try: Take a fatbiking trip across Finland’s remote Oulanka NP (Feb–Apr) to cycle beside ice-covered lakes, exploring primordial forests and wintry taiga. In the evenings, you’ll swap frost for the steam of a traditional sauna and, with luck, see the swirling northern lights. 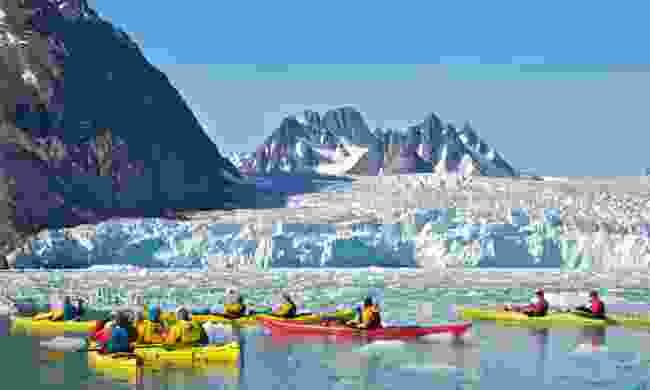 You can climb them, sleep in them, and even paddle down them: yes, we’re talking glaciers. In late spring, the glaciers of British Columbia’s Coast Mountains start to thaw, creating luminescent blue pools and channels that stream downhill. From May to early July, Compass Heli Tours offers helicopter trips into the mountains, where you can paddle the meltwater in inflatable kayaks. Conditions have to be just right, though, so this exciting experience isn’t possible every year. There are more glacier lagoons to explore in Iceland (Heinaberg, Solheima or Jokulsarlon) and the wild Kenai Fjords of Alaska, where paddling to Ailik Glacier reveals seals and sea otters hauling themselves onto the floating ice.

Give it a try: In late summer (Aug–Sept), heli-kayaking trips in the Coast Mountains focus on the region’s great seasonal lakes of glacial meltwater. You’ll explore by kayak and camp on the shore overnight. 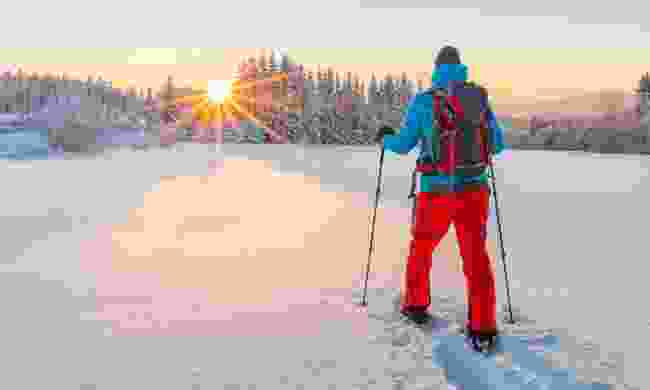 When snowshoes were invented, over 4,000 years ago, they were a necessity. These days, they’re a fun way to extend the winter hiking season. From tramping snowbound First World War-era trenches in the Cinque Torri section of Italy’s Dolomites to pounding the driven powder of Bulgaria’s little-seen Rodopi Mountains or shuffling around Neko Harbour in Antarctica (a cruise excursion destination), there are plenty of options. There are marked routes for self-guided snowshoeing hikes, too, especially in the French Alps. Equipment is minimal: all you need to get started are thick-soled waterproof boots, snowshoes (no longer the cartoonish tennis rackets of popular imagination) and some walking poles.

Give it a try: Snowshoe through the remote snowy valleys, coast and forests of Japan’s North Honshu (Feb–Mar) region, following in the footsteps of the poet Basho, with nightly visits to the local onsen (hot springs) to warm your bones in the evening. 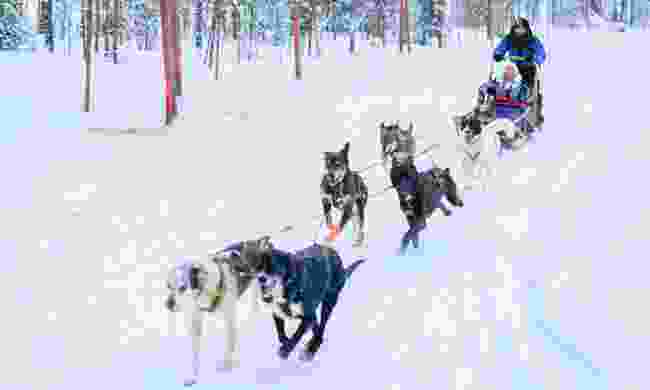 In the snowbound countries above the Arctic Circle – particularly Lapland, Northern Canada and Greenland – dog sledding is a way of life. To sample it, you can take a multi-day winter safari, learning to harness and look after the dogs and to control them with your voice. Whether you choose a polar bear spotting trip in Svalbard or a journey into Greenland’s high Arctic, you’ll blast through a remote, crystalline wilderness.

Give it a try: Enjoy a ten-day trip along the famous Yukon Quest dog sled trail in Canada (Jan–Feb). You’ll devote the first three days to getting to know your huskies before gliding through forests and across frozen waters in their wake, overnighting in wilderness cabins along the way. 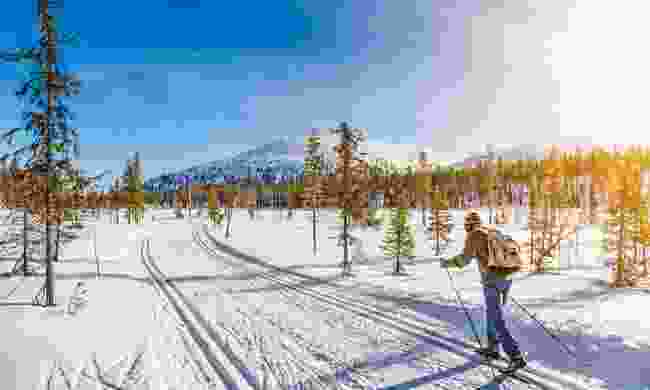 Cross-country skiing isn’t as hard as it looks. Depending on your fitness and ability – here, skiers have an advantage – you’re likely to find the classic style (moving the skis parallel to one another) quick to pick up. This technique is well suited to backcountry routes, so is a fine way to explore a region in depth: you could cabin-hop the iconic 440km-long Kungsleden Trail in Sweden (Oct–May), ski up Chile’s volcanos, or sample the gentlest of the 4,000km of trails across Austria’s Tirol Mountains. On intermediate-level tours, tuition for those who are a bit rusty may be thrown in.

Give it a try: Take a winter city-hopping ski tour across Estonia, from the 14th-century city of Talinn and the trails beyond its walls to the forested wilds of Otepää. 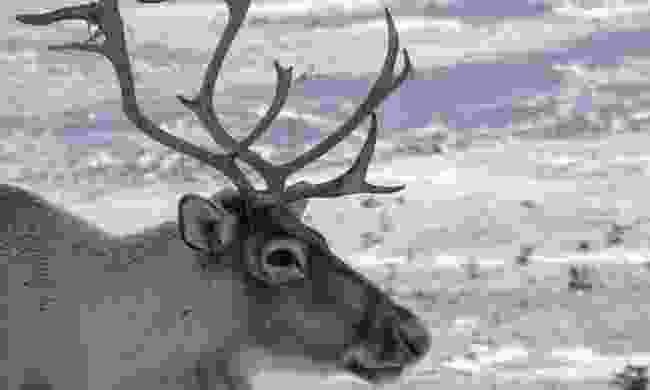 Reindeer foraging in the snow on a winters day on a hill in the Cairngorms National Park, Scotland (Shutterstock)

This classic survival technique has given rise to some wild escapes, popular with those wanting to boost their winter skills. Some call it a ‘snowhole’, others a ‘snow cave’ – it amounts to the same thing: a shelter for the night. It can take up to seven hours to create one (30 minutes to dig a hole big enough to fit a person, then you enlarge it from the inside), but it makes a wild finale to a guided hiking trip, whether exploring the remote Scottish Highlands or bedding down on animal hides under the Milky Way in the wilds of Norway.

Give it a try: On a snowhole expedition in Scotland’s Cairngorms NP, you’ll start by learning a few winter skills before hiking into the park. Out among its roaming reindeer herds, you’ll help build a group cave, then spend the night in the snow. 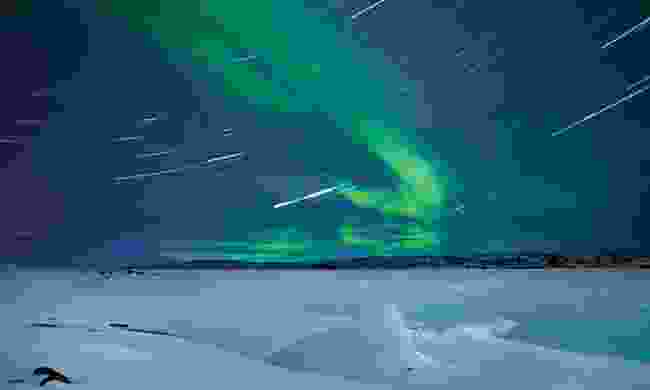 The northern lights in a starry sky (iStockphoto)

The aurora borealis is shrouded in fables. Whether they remind us of the angry ghosts of slain enemies (Inuit) or spirits of dancing maids (Norway), they tap into something deep in our psyche.

But there’s no magic here. Particles from the sun enter Earth’s atmosphere and collide with its constituent gases, erupting in great swirls of green (oxygen), red (high altitude oxygen) or blue (nitrogen). The strongest displays occur in the frozen north (borealis) or south (australis), particularly within the auroral oval between 65º and 70º latitude.

The likelihood of a sighting is determined by geomagnetic activity, measured in the Kp scale from zero (low) to nine (high). For example, Kp3 will cause the northern lights to be visible at 65ºN, and, on a clear night, possibly as far south as 50ºN; anything over Kp5 makes them visible from the UK.

To increase your chances, head for higher latitudes, wait for a clear night, avoid light pollution (and full moons), be prepared to stay up between 10pm and 2am (prime viewing hours) and wrap up very, very warm. Auroras are practically invisible in the lighter summer months, so travel between October and April, combining your sightings with an icy winter adventure.

Three ways to see the lights

Take a trip in northern Norway, combining orca- and whale-spotting in the fjords by day with cosmic sightings at night (Oct– Feb). Some of the region’s cruise operators offer another trip free if the aurora borealis doesn’t appear, such is their confidence that it will. 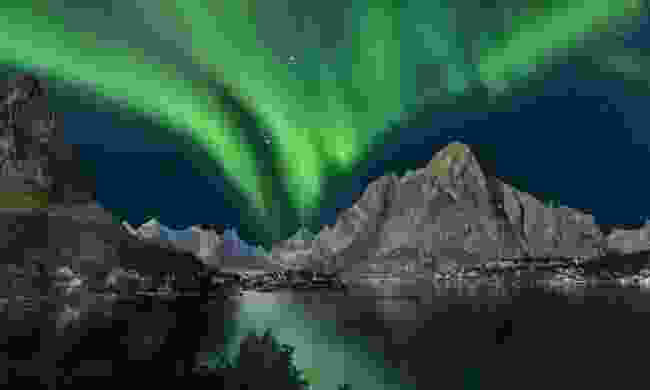 Northern lights reflected in the water in Norway (Dreamstime) Northern Canada is slap-bang in the auroral oval. Trips out into the remote reaches of Arctic Yukon combine snowmobiling, dog sledding and remote gold rush ghost towns. At night, you’ll hike out into the snowy hills to watch the northern lights.

There are few more remote locations than eastern Greenland. On a dog sledding expedition (Feb–Mar) among the glaciers and fjords of the Ammassalik region, you’ll mush into some of the wildest parts of the Arctic to gaze up at the clear night skies. 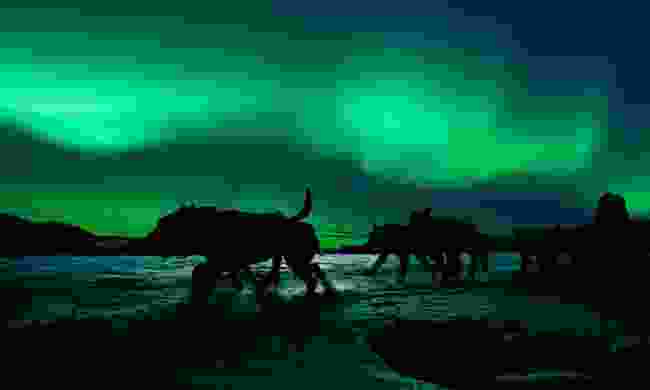