Wander Woman: Katherine Routledge, who stood on the shoulders of giants

While exploring the secrets of the moai on Chile’s Easter Island, Phoebe Smith ponders a greater mystery – why haven’t we all heard of archaeologist Katherine Routledge?

He was giving nothing away. As I gazed into his eyes – which seemed to be staring off to another place, another time – he was impossible to read. Standing in front of the beach, while the waves crashed against the shoreline behind him, he cut a striking silhouette in the early dawn light.

I continued to regard him tentatively as the sun rose behind. His lips were pursed as though he might speak at any second, but other than the seabirds calling overhead, all was silent.

I was at Tongariki on Easter Island, Chile’s furthest flung outpost. To get there requires a 5-hour flight from Santiago, and covers a distance that’s further than London is from Canada’s Newfoundland, so it takes a determined traveller to venture all this way. 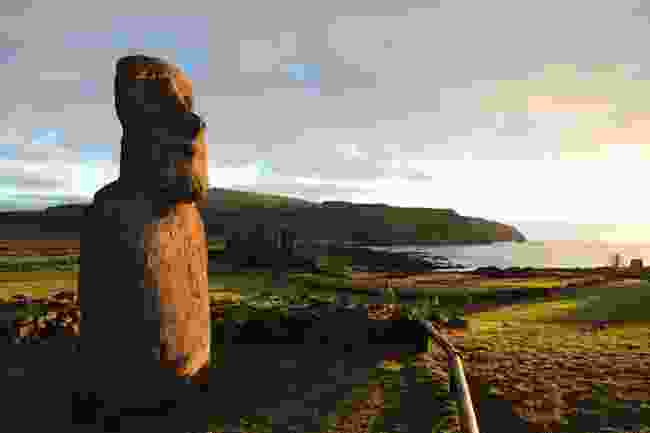 The Travelling Moai at Tongariki, at dawn (Phoebe Smith)

But, ever since my mum had shown me a photograph of a moai statue in a book when I was a little girl, I’d been desperate to voyage here and discover the secrets of these giant manmade figurines. Coming face to face with one I hoped I’d only have to gaze into its eyes and instantly understand their construction, their reason, their past; but trying to gain anything from a stone statue was, of course, impossible.

Thankfully, the ability to converse with animate stone objects, carved from the compressed volcanic rock that formed this triangular shaped island, is not necessary. And it’s mainly because of one woman – a Brit called Katherine Routledge.

Mention her name in her native land and few (if any) will offer a look of familiarity. Yet it’s because of her that we know as much as we do about the origins and reasons for the moai. That’s because in 1914 she and her husband, after commissioning the building of a boat they named Mana, set sail from Falmouth, UK, with Easter Island as their ultimate goal. The journey took months, but when they finally arrived they began the first archaeological survey of the isle. But while they did several digs, including at the spot in Tongariki where I now stood, it wasn’t that which set her work apart. 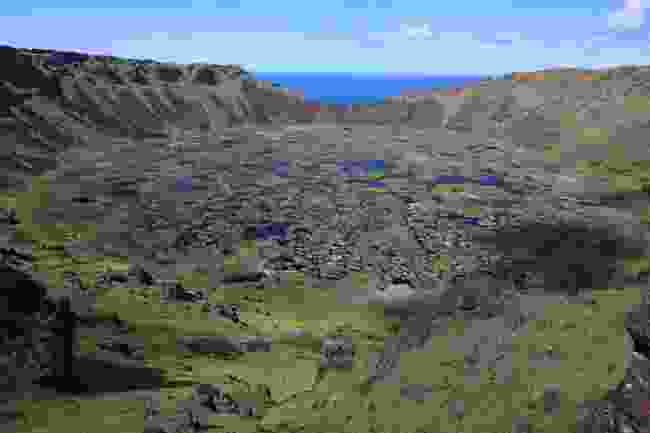 When Katherine Routledge stood here it all looked very different than it did for me, as rather than seeing 15 statues stood to attention, every single one of the moai was toppled over and lying ruined on the ground.

So, rather than only obsess with the physical detail, she hired a guide and spent much of the 15 months she was based here, interviewing and re-interviewing the Rapa Nui elders who had witnessed life pre-slave raids and Christian missions. As such she was able to discover that the statues faced inland as each one represented an ancestor from the village that they watched over. She discovered that they were thought to project their mana – or magic – onto the residents. And she also learned about the inter-tribal wars, which resulted in the destruction of the old belief system and manifested in the overthrowing of the statues.

Since the 1950s many have been painstakingly reconstructed through grants so visitors can witness them in the same way they would have looked from around 900AD-1838. Over the four days I spent there I marvelled at these towering constructions. Some were small and squat, others rose to the height of 4 metres (around the same as a double decker bus). Many had puako, or top knots, balanced on their heads – made from volcanic scoria rock, and one even had eyes made from coral – as they all would have done once they were completed. 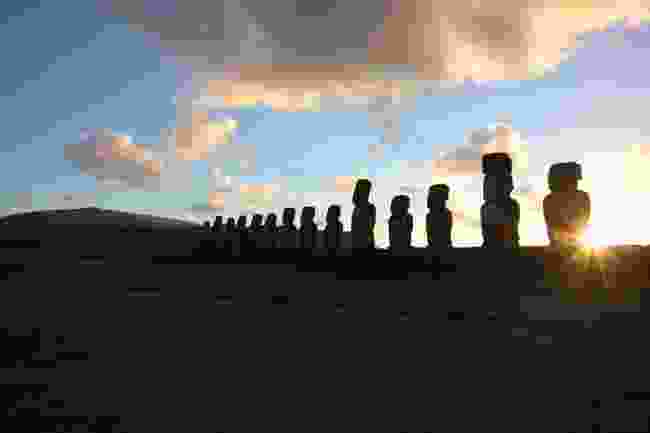 I wandered amid Rano Raraku, aka The Quarry, where a total of nearly 400 statues, in various states of construction, still sit, waiting for the sculptors to return. Some have been buried by landslip; others broken in transit and lay face down in the grass. Then there are some that are half carved from the sheer rock faces which, if finished, would have stood at over 21 metres high.

All are recorded in Routledge’s book The Mystery of Easter Island, published 100 years ago, and it is still used today by archaeologists and ethnographers trying to learn more – so, you may ask as I did, why isn’t her name well-known?

Perhaps it’s due to how she met her end – committed to a sanatorium against her will by her husband in 1929, she died seven years later aged 69.

As I navigated my way around the island exploring lava caves, visiting the crater of Rano Kau where she seemed to find such peace and tranquillity and watching the sunset at the restored complex of Tahai near the tiny capital of Hanga Roa, I couldn’t help but think that in many ways she was like the moai which she had loved so much. 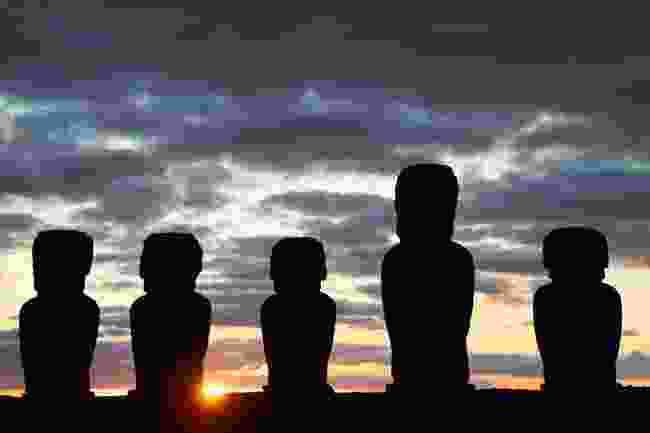 Though she may have been left for a time to lie in the dirt, forgotten by most and ignored by many, by picking up her book we now collectively have the power to resurrect her spirit, to acknowledge the important part she played in the history of Easter Island, and once more allow her name to rise as tall as the statues she helped us understand.

Phoebe travelled to Easter Island with Journey Latin America, staying at the excellent Explora Rapa Nui (where all excursions, food, drink and transport are provided). For more on the island, see Chile's official website.