We’re close,” whispered John, my guide. We were surrounded by vegetation so thick that it was barely penetrable. It was only thanks to the expert machete-wielding skills of the men leading us unerringly through the tangle of vines, shrubs and low hanging branches that we’d made it this far.

“How do you know we’re close?” I whispered back, curious to know. I didn’t doubt John for a moment, but he had worked in this forest his entire adult life and I was intrigued that he had picked up on something that I had completely missed.

“There was fresh dung on the track and I heard chest beating,” he explained. “And if we push through here...” He parted a curtain of leaves and I gasped. My hands flew up to my face in disbelief and tears of delight sprung from my eyes. “There they are,” said John, who took my hand and led me to meet a family of eastern lowland gorillas. 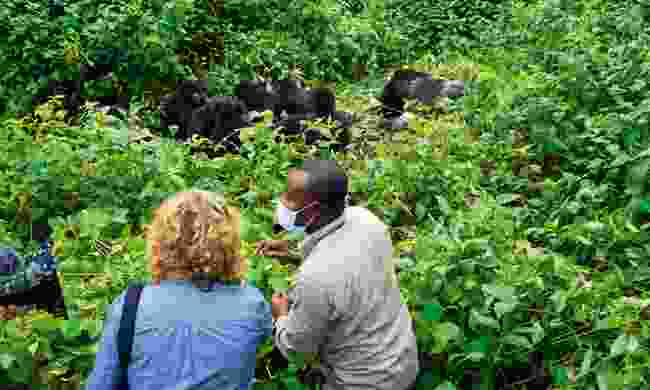 Kate and John crouch in the undergrowth to watch a family of eastern lowland gorillas (Jonny Bealby, Wild Frontiers)

A day earlier, I’d begun my journey to the forests of Kahuzi Biega National Park in the Democratic Republic of the Congo (DRC). This is the only country in the world where this subspecies – the largest in the gorilla family – is found. But the DRC still has something of a reputation, and travellers aren’t common in its parks these days.

Rwanda’s history is as chequered as its neighbour’s, but since the dark days of the early 1990s it has undergone an astonishing change, with tourism now one of its biggest and most vital sources of income. You can see gorillas there, too. Rwanda is home to the mountain gorilla, made famous by Dian Fossey, and its forests now rival Uganda as a favourite destination among travellers to see these remarkable primates. There is a good reason for that. It has built up a reputation for offering visitors great wildlife viewing, with excellent guides, comfortable lodges and good infrastructure. But it all comes at a steep cost. Prices for visiting the gorillas have recently been put up to US$1,500 (£1,128) per person per day.

Park fees in the DRC’s Kahuzi Biega NP are significantly less – US$400 (£300) per person per day – making it a cheaper alternative. But I still had to get there, and as someone who has travelled widely throughout Africa, I was expecting the border crossing to be a long, frustrating experience. My fears proved to be unfounded, though. I joined an orderly queue on the Rwandan side, and within 20 minutes my passport was stamped and I was free to go and meet my tracker.

“John used the money he had earned from taking tourists to see the gorillas to set up his foundation, benefitting both the people of the area and its wildlife”

John Kahekwa was born in Miti, a village on the outskirts of Kahuzi Biega. Following family tradition, he became a gorilla tracker after he left school, and since then he has seen great changes. The park was given protected status in the early 1970s and was a popular tourist site until war broke out across the region in the ’90s. But it was his work with tourists that enabled John to set up the Pole Pole Foundation, an NGO run by locals and set up to better the lives of communities living on the park’s boundaries through tourism.

Despite the DRC being enormously rich in resources the rest of the world wants – your mobile phone likely contains at least one element mined here – little, if any, of the wealth that generates filters down to its population. Most of the people living in John’s village are desperately poor and, for them, the park was somewhere to cut down trees to build their houses, use for firewood or turn into charcoal to sell. Animals such as antelope and bush pig would be hunted for food using snares. Sadly, the indiscriminate nature of these rudimentary but deadly traps meant that any animal – including gorillas – was at risk. If caught, the villagers would be fined, but few had the money to pay the penalty and no choice but to risk prosecution again and again to be able to feed themselves and their families.

John used the money he had earned from taking tourists to see the gorillas to set up his foundation, benefitting both the people of the area and its wildlife. He started a tree planting project that provided fast-growing saplings like eucalyptus for the villagers to plant and harvest. The foundation built schools and paid for people to get training in skills that would provide them with the means of making a living. Today, 25 years on, the Pole Pole Foundation is still going but the tourism that was both a direct and indirect help to the community has all but dried up, and life for the people of this region is hard. 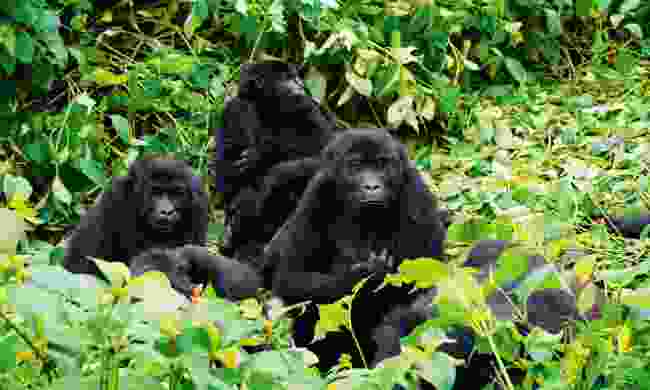 “We feel forgotten and overlooked by the rest of the world, which is happy to exploit us but not support us,” John explained. So he has made it his life’s mission to remind the world that Kahuzi Biega National Park is still here, as well as being home to one of our planet’s most charismatic and fascinating creatures.

John and I met at the rickety bridge that separated the neat order of Rwanda from the glorious, noisy chaos of the DRC. The park authority works with Border Control to organise tourist visas, which is why we had seemed to just breeze through.

I was staying at the Orchids Safari Club, which I envisaged being one of those once rather grand places that had fallen into disrepair, with a faltering generator and rusty water in the taps. Again, I was wrong. My room was set in beautiful gardens full of birds on the shore of Lake Kivu, while the restaurant was full of expats (there’s a UN base nearby) being served outrageous cocktails by friendly staff. The other surprise was the park itself, which has maintained its visitor centre and dedicated multilingual staff, despite the fact that, according to the visitors book, I was only the 74th foreign guest in ten months.

It was then that I was given a briefing on the park’s history and the current status of its gorillas. The big question on my mind was how likely was it that I’d get to see a gorilla. Although there are four habituated groups within the park, the area is huge (over 6,000 sq km). But John was in no doubt:

“At this time of year they are feeding in the bamboo forest. The trackers have been out since the early morning and they have already radioed to say they have found one family, so we should go.”

“They staged dramatic mock fights: beating their chest, grunting, charging each other and tussling together on the floor”

We drove a short distance and then got out to join the trackers, who were waiting for us on the edge of the forest. We followed them into the cool, damp gloom beneath the heavy canopy of leaves and I immediately felt a sudden frisson; that shiver of nervous excitement that comes when I’m in a place where there are other animals bigger, more powerful and more suited to the environment than me. Unseen birds squawked and screeched, butterflies flitted lazily by, and our feet moved almost silently over the mulchy forest floor. John stopped abruptly and pointed at a pile of shredded bamboo shoots.

“Gorillas have eaten this,” he explained. “They strip off these woody outside bits of the bamboo and eat the juicy insides.”

As we walked on, we saw more discarded piles of gorilla leftovers, and then, after barely an hour of walking, I was there, sitting in a clearing in the presence of a truly giant silverback and his family of one female and 18 juvenile males, the air thick with their unmistakable musky scent.

Nothing prepares you for an unfiltered encounter like this. It is a thoroughly overwhelming privilege to be able see entirely wild animals in their natural habitat, and for those animals to be so unbothered by human presence that they will carry on as if you weren’t there. In the hour that I spent with them, I watched them groom, play and feed. Youngsters climbed on their older siblings, demanding attention; others staged dramatic mock fights: beating their chests, grunting, charging each other and tussling together on the forest floor. It was a magical, memorable encounter that proved beyond doubt that this forgotten part of the world is well worth remembering once again. 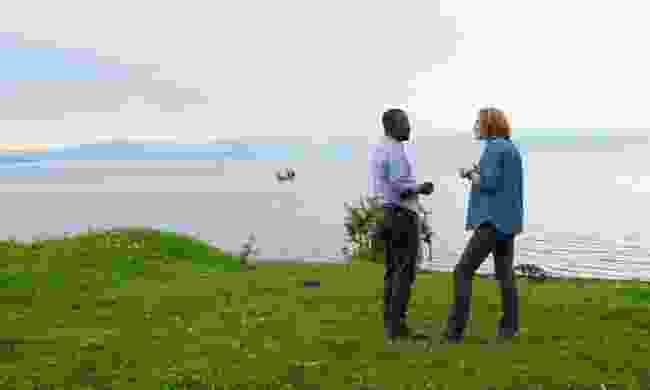 John and Kate on the shores of Lake Kivu (Jonny Bealby, Wild Frontiers)

The author travelled with Wild Frontiers (020 8741 7390). This trip is available on a tailormade basis or as part of a small group tour. The latter is called Congo & Rwanda: Great Apes of Africa and includes permits, all meals, accommodation and a donation to the Pole Pole Foundation, but excludes international flights. Insurance can be arranged.

Lying on the edge of Lake Kivu, Orchid Safari Club has gardens that overlook the water. It is also handily placed for trips to Kahuzi Biega NP.

Visiting the Lwiro Chimp Sanctuary and spending time with the community at the Pole Pole Foundation offers a truly eye-opening insight into this little-visited part of Africa and its endemic wildlife.

Not only is Virunga Africa’s oldest national park, it’s a haven to some of the rarest wildlife on Earth. Of the 900-plus critically endangered animals left in the world, roughly a third live here. For a large chunk of the past couple of decades, this UNESCO-listed site has been closed due to war and political instability, but in the last few years it has reopened a number of its sections.

Rising out of Virunga NP, this volcano is home to the world’s largest active lava lake, and treks to its crater reveal thrilling views from the top.

This vast lake stretches across the border into Rwanda. There’s plenty to see, with the large central island of Idjwi reached via boats from Goma and offering a quiet escape and caves to explore.

Spacious grounds, lakeside views and a general air of colonial decadence make Orchids Safari Club an enticing bolthole to sip a cool cocktail or two and recline by the lapping shore.