Mention the Jesuits and South America in the same sentence and most people will shout, “The Mission,” the 1986 film that won the Palme D’Or at Cannes among an armful of awards. It’s a moving film, made even greater by the story and locations on which it is centred. The production employed poetic licence (splicing in scenes from Guyana) but the Iguazú waterfalls were shot in all their rushing splendour. The film’s success helped put the region on the map.

The Jesuits arrived on the borderlands of what would become Argentina, Brazil and Paraguay in 1609. They were drawn by the potential for agriculture (yerba maté became the main cash crop) and access to fresh water in the Paraná River basin. But their main objective was the conversion of the indigenous Guaraní, persecuted by the secular authorities, in particular the bandeirantes: slavers and fortune-hunters who marauded across colonial Brazil. At the time, Asunción, today the Paraguayan capital, was one of the main population centres in the Spanish South America. 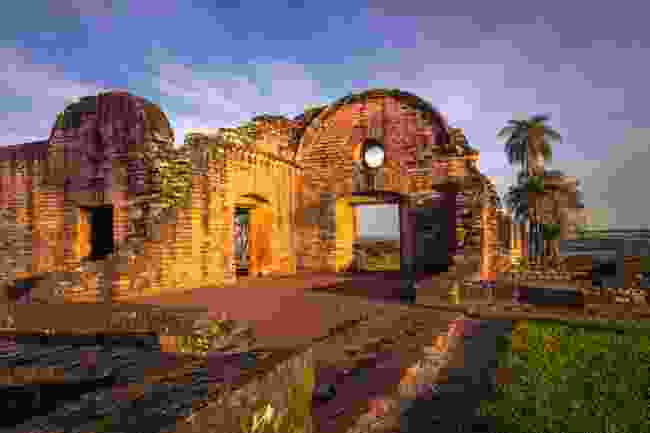 Inside the ancient Jesuit ruins of the Mission of Jesús de Tavarangué, designated a UNESCO World Heritage Site in 1993 (Shutterstock)

During the 17th and 18th century, some 30 missions – also known by the Spanish name of reducciones – in reference to the concentration of hitherto scattered peoples – were established across a wide region. They were closed to Spanish settlers, to keep out not only disease and vice but also exploitative mine- and land-owners. Missions typically sheltered between 1,000-5,000 Indians, although some grew larger. The Guaraní were taught agriculture, handy skills like tanning or carpentry, and were schooled in the arts – they had a special aptitude for music. By the time the Jesuits were expelled in 1767, the mission towns were home to more than 100,000 non-Europeans.

Seven missions were built in southern Paraguay. Their layouts followed a pattern and had similar functions, although some stand out for a chapel or artworks; San Cosme y Damián (1632) meanwhile was the site of an astronomical observatory. The full list can be found at: visitparaguay.travel (click on ‘Jesuit Route’).

Two easy-to-visit, UNESCO-listed sites and a small town give visitors some sense of the ambition of the Jesuit vision. Jesús de Tavarangué (established 1685) is notable for its Mudéjar (Christian-Arab) architecture – unique in the region. After dark, Thursday to Sunday, a 3D projection recounts the history of the missions. Trinidad del Paraná (1706) has the skeletal walls of a large church built around 1745 following the design of the Milanese architect Juan Bautista Prímoli, as well as the remains of a school, cloister, workshops, belfry, cemeteries and kitchen garden. Weather-permitting, the site is lit up in the evenings for a son et lumière.

The third stop, Santa Maria de Fe, is different. It’s an unspoilt town, with a plaza on which stands a Jesuit-era house. This contains some 50 carved statues of saints and holy figures, evidence of the artistry of the Guaraní.

Few people get to see this though, as Paraguay is poor, landlocked and off-radar for most tour firms. However, the birdsong, insect noises, rich red soil, sultry weather and lack of crowds mean that you have the peace and space to imagine how the missions might have looked and felt in their heyday. The best way to explore is to travel by road and, over two or three days, see the two UNESCO sites and maybe one or two others. En route you can detour to admire the Iguazú Falls and extensive ruins at San Ignacio Miní, Argentina’s largest and most visited mission.

In the modern era, Paraguay’s history has been dominated by repression, corruption and dictatorships. But from 1609 to 1767, it was the backdrop to one of the most humane – and humanistic – ‘colonies’ the world has ever known. To experience the Jesuit’s ambition in person instantly eclipses anything that the big screen can project. 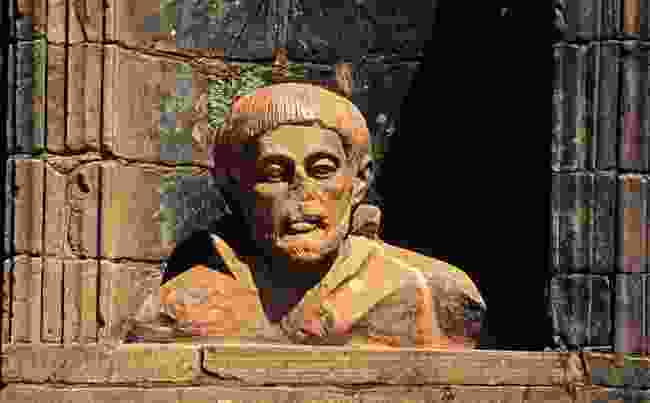 Visitors can appreciate the skills, such as carpentry, passed on to – and enthusiastically taken up by – the Guaraní by the Jesuits (Alamy)

Getting there: There are no direct flights from the UK to Asunción. British Airways and LATAM fly to Asunción via São Paulo; Air Europa via Madrid.

Getting around: You can catch a bus from Asunción to the south. We recommend using a good tour operator and guide in the missions area. UK-based Latin American operators can assist, or contact Margaret Hebblethwaite via the Santa María Education Fund. Combined entrance to the two UNESCO missions and Cosme y Damián costs 25.000Gs (approx £3).

When to go: Year round; summer (Dec-Mar) can be hot and humid.

Accommodation: The Santa María Hotel has small, simple rooms and is on the main plaza. The hotel serves breakfast, lunch and dinner; expect hearty soups and stews, empanadas and grilled meat or fish. Doubles from 180,000Gs [approx. £19].