Dark Waters presenter Jeremy reveals the stand-out mysterious and mystical lakes and rivers he’s travelled to in his career, discovering Lake Garda’s hidden monster to the water spirits of the Zambezi...

Biologist Jeremy Wade has explored the earth’s mightiest rivers, examined the plausibility of the our planet’s most-whispered about lake monsters, and even made connections with protective and all-powerful water spirits around the globe – throughout his TV career pursuing the mysteries of the underwater world.

As the latest series of Dark Waters returns, we sat down with Jeremy to find out which supernatural water wonders have stuck with him, long after the cameras stop rolling…

“These stories are worldwide,” he begins, “because water is so mysterious we can’t see what’s under there. I think what happens is the human mind doesn’t like that vacuum, doesn’t like things we can’t understand, so it fills that space. We create stories.” 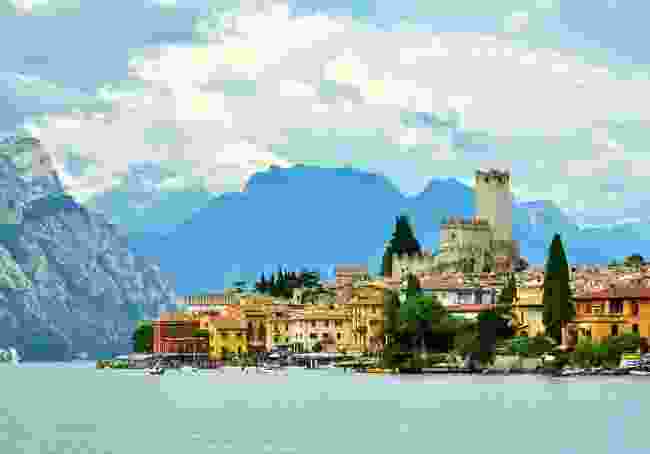 Picturesque Lake Garda is known for it’s crystal clear waters, but also for the rumoured existence of an unnamed, prehistoric lake monster, which Jeremy hunts down in the first episode of the new series of Dark Waters.

“What’s very interesting about Lake Garda is that people automatically make that comparison with Loch Ness,” he says.

“Loch Ness is a fascinating place, but one of the most interesting things is that it’s ridiculously deep, very steep sided, but from a biologist’s point of view has almost no shallow water, which means there’s no weed or small fish. If you’re thinking about a monster, there’s not much for it to eat.

“Instantly you’re a little bit doubtful about that story, approaching it from that direction.

“If you look at a map of Lake Garda, it’s formed by two distinct halves, the northern half is in the mountains, with rock plunging into the very deep water, but the southern half spills out over into the plains, and there you have got shallow water. It’s warm, you can see the fish in the weeds, so instantly you can see, ‘ah, there is food here for something bigger’.

“The other thing about Lake Garda is it’s connected to the River Poe, which flows into the sea, so things could be moving around. Two people I spoke to had seen something quite recently – a woman named Clara said she was just standing in the water and two large creatures came really close to her.

“If you’re going there, you never know, there could be something. It’s such an incredible destination for filming, the mountains are spectacular, and it’s impossible to have bad food in Italy, so put all that together and we thought we’d get a pretty good episode.” 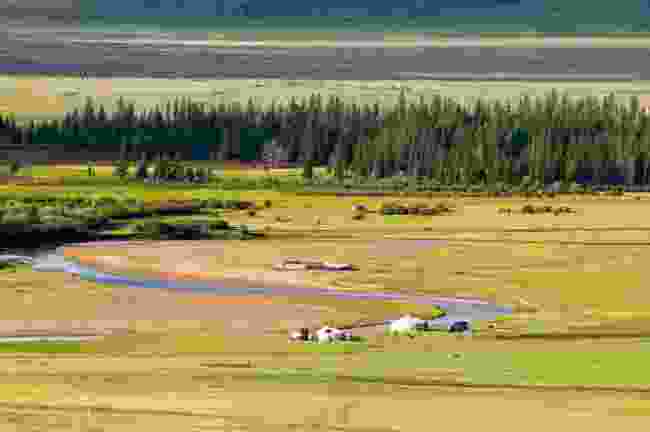 The valley of the River Delger Mörön, in northern Mongolia (Shutterstock)

“Lots of places have water spirits. They guard the river and its creatures. They will also protect the fisherman, and these spirits will often talk through certain people, through a medium or through shamans, and the common message is they will look after people, if they treat the river with respect and take just what they need.

"I was filming on the River Delger Mörön in Mongolia a few years ago, and I had a meeting with a shaman. Shaman are normally male, this shaman unusually was a young woman.

"She put on her garb, a mask and a very elaborate costume, and she went into this trance, was beating a drum, and started speaking with almost an old man’s voice. It was really quite creepy, and made the hair on my neck stand up.

“She grabbed me by the wrist. She had this piece of fur in her hand almost like a brush, and started brushing the palm of my hand and then sniffing it to see what kind of person I was. She was talking but not in Mongolian, she was speaking in tongues. Her attendant was then translating it into Mongolian and then a translator translated to English.

“The shaman was saying I could fish here, but that she’d been talking to the spirits, and I had to take some yak milk and flick it in different directions, on the land behind you and in the water, before going fishing. I actually caught a fish; whether it helped I don’t know.

“Normally, when I’m making a programme I’m collaborating with local people and if they say to me, ‘we’re going on the river, we want you to do this ritual’, that’s fine with me. It helps the whole process.

“Mongolia is also one of the most amazing places I’ve been to in terms of scenery. I spend a lot of time in jungles which can be a bit claustrophobic and a bit monotonous to be honest, so I like getting into the mountains where it opens out a bit.

“The scenery is just so amazing. It’s almost like it’s been landscaped by some incredible artist.” 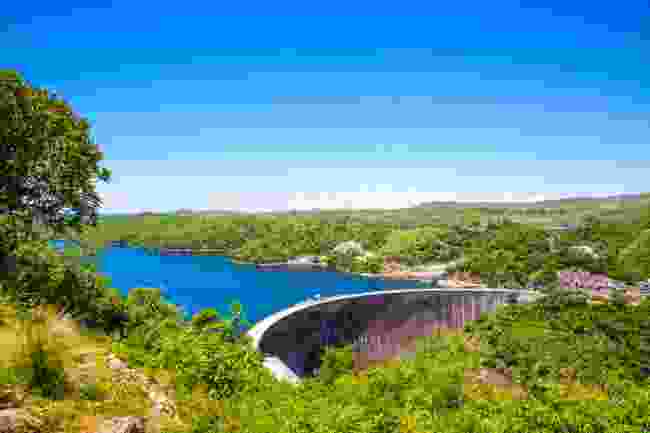 The almost vertical Kariba Dam, on the Zambezi River (Shutterstock)

“There’s another water spirit called Nyami Nyami, in the Zambezi river. Again, this is a spirit who protects the fisherman but gets angry if the river is disrespected.

“When the Kariba Dam was built over the Zambezi in the 1950s, the stories say that it angered the water spirits. People died as a result of trying to build that dam.

“People,” – the Tonga people of Zambia and Zimbabwe – “now say that Nyami Nyami is gone, or no longer exists, but the fisherman still wear a little charm around their neck to keep them safe, a snake with a fish’s head. I was given one as well, and told to wear it while on the river to keep me safe.

“As part of filming, we went to Kariba Dam and had special permission to go below the dam to the base and its incredible - it’s almost vertical in that it feels like its overhanging, and you’re there at the bottom, and get the sense of the tremendous weight of water. It feels quite scary.

“As a place to be that embodies the power of water, it is incredible. I don’t think as a general rule people can get down there, but you can go to the top of the dam and look down, and see this massive lake on one side, and way down on the other side see where the river comes out, on the Zambia and Zimbabwe border.” 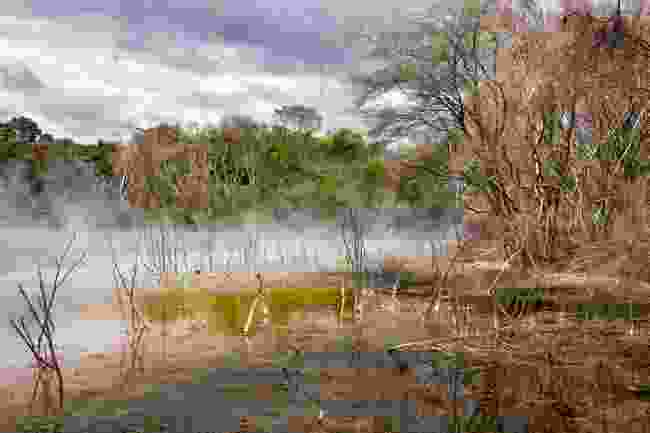 Kuirau Park, New Zealand's only geothermal park, in Rotorua, has a legend about a taniwha dragon (Dreamstime)

“In New Zealand, you’ve got the same kind of thing. They also have spirits of the place, called taniwha, that sometimes appears as a log or an eel living down in a cave.”

(Indeed, taniwha is a water monster from Maori legends, described best as serpent or dragon-esque in appearance, that’s said to live in deep water, like oceans, rivers, lakes or even caves.)

“It's interesting how similar beliefs are all over the world,” Jeremy adds. “You’ve also got it in the Amazon, where spirits protect the fish but also in an intermediary way, you only do it in a respectful way. You only catch what you need, you don’t over exploit. This happens almost everywhere you go, where there’s water, or people are dependent on water.” 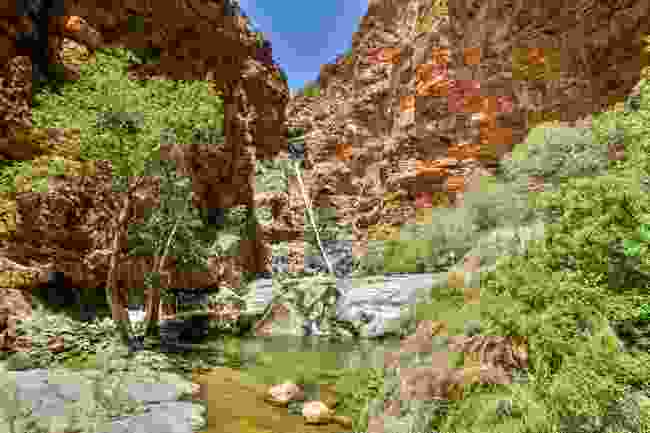 “We did another Dark Waters episode in South Africa where there are stories, recent stories, of what people are describing as freshwater mermaids.”

(There have been reports of sightings over the last decade of a fish-tailed, blue-eyed woman intent on combing her long, dark hair before eerily disappearing into thin air.)

“This is in the Karoo district, so we’re talking if you go east of Cape Town, and search in the rivers that flow into the eastern seaboard.

“These also link with very ancient stories about something in Karoo - so for the programme that we did, we asked: is there any real creature that could possibly give rise to those stories?

“Again, at the end of the episode, we do come up with something that is a possibility. I do rule some things out, but there might be that possibility. Maybe it’s not totally supernatural. Maybe there’s a natural explanation for some of it.”