In 2019, all eyes were on Japan's 12 host cities for the Rugby World Cup. Each host still offers a wealth of things to see and do, beyond the games and better-known Japanese cities like Tokyo and Kyoto...

2019 saw the Rugby World Cup sweep into Asia for the very first time, with Japan hosting the ninth ever tournament. From 20 September to 2 November, all eyes were on each of the dozen Japanese host cities and their respective stadiums.

From well-known Tokyo and Osaka, to lesser-known Japanese gems like Kyushu and Kansai, there's always been plenty more than just the rugby to think about. Each host city and region proves it well worth a visit, with a wealth of things to see and do. 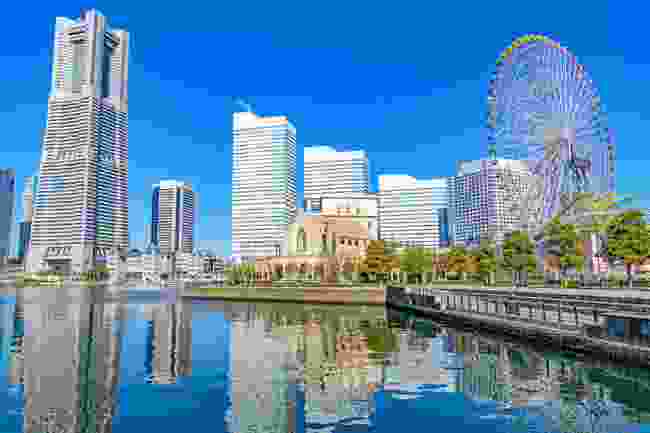 Japan’s second largest city isn’t happy with playing second fiddle, and used the World Cup as an opportunity to showcase its charms. It’s a metropolis on a human scale, that is handily less than 30 minutes by train from Tokyo.

A relatively unassuming fishing village as recently as the 19th century, today Yokohama is a bustling city, where first timers will feel a little less Lost In Translation than in Tokyo.

In recent years, its old docklands have been reinvented as a shopping, dining and leisure oasis. History buffs can check out the Yokohama Port Museum and culture vultures can enjoy the Yokohama Museum of Art. Noodle fans? Yes, we know you're out there. For you, it has to be the CupNoodles Museum, where you get to conjure up your own treat.

Which rugby games did Yokohama host? The final, one semi and group matches graced the 75,000-seater International Stadium in Yokohama, Kanagawa Prefecture. 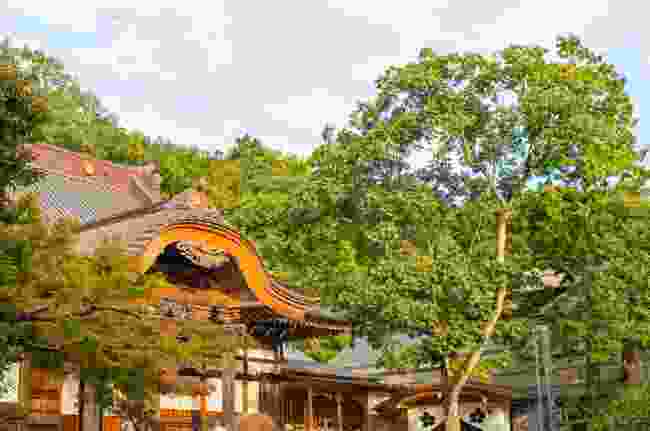 This brash, adrenaline pumping side of Tokyo is a given, but now's the time to dig deeper and find a more relaxed side, where traditional and culture come to the fore in quiet temples and neat gardens laced with perfectly trimmed Bonsai trees.

Tokyo emerges as not one city, more a sprawling network of settlements each with their own character. Technically, its classed a metropolitan prefecture, and in its west, there are 26 cities alone. Chōfu, one of said cities, is far quieter than the buzzing centre.

Its perhaps best known for its 42-hectacre Jindai Botanical Gardens, and the quaint Buddhist Jindai Temple, first built in 733 AD. Now, also for being home to the capital's (almost) 50,000-seat-strong Tokyo Stadium.

Which rugby games did Chōfu host? Tokyo Stadium in Chōfu is hosting the third-place play off, two quarter finals and opening round matches. 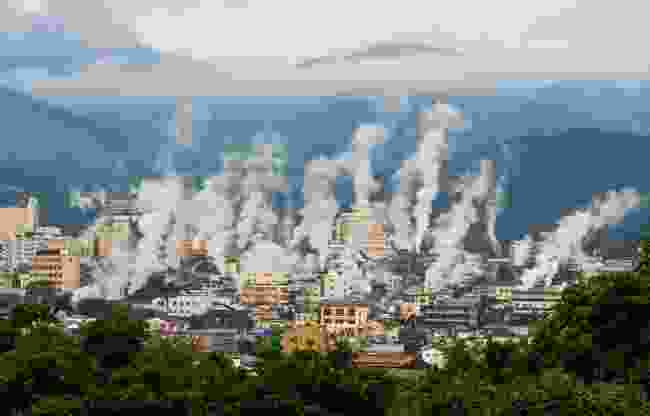 One key venue that may have been unfamiliar to fans was the Oita Stadium, designed by uber Japanese architect Kisho Kurokawa. It resides in the city of Oita, in the eponymous prefecture, also on the southern island of Kyushu. The city only came into being very recently, in 2005, when the towns of Notsuharu and Saganoseki merged.

Prices in the local shops are keen as this is not currently a huge tourist hub. It’s a good base, though, for getting out and exploring nature, with thermal onsen spas tempting in the hills (particularly the neighbouring city of Beppu) and Takasaki Mountain on hand. Go to Takasaki particularly to see wild macaque monkeys – there is a dedicated reserve.

In the kitchen, Oita delivers along with the best of them, with their signature delicacy: Toriten, the glorious local fried chicken.

Which rugby games did Oita host? Oita Stadium hosted a brace of quarter finals and first round matches.

Discover more about the island of Kyushu 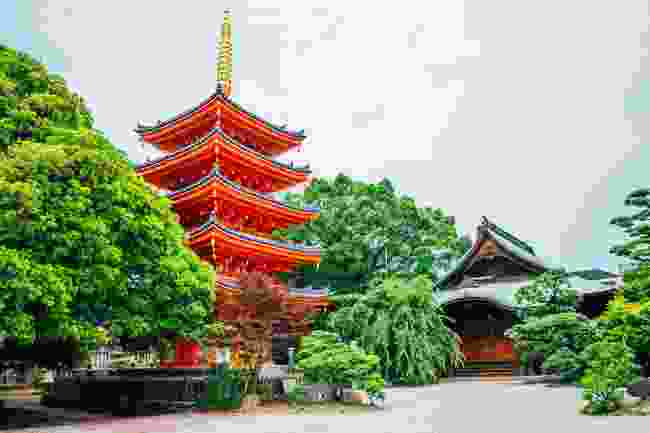 Fukuoka is also tucked on the island of Kyushu, its largest city and capital of Fukuoka Prefecture. Thought to be the oldest city in Japan, it boasts onion-like layers of history. It’s as varied as the Nagahama ramen noodle dishes Fukuoka is famous for.

Fukuoka is a great city for many things. Chilling out is one, as its home to many brilliant beaches. Meanwhile, the peaceful Maizuru Park contains the 17th century ruins of Fukuoka Castle.

You must explore the Hakata district, which contains the Shingon Buddhist Tocho-ji Temple, with its famous wooden Buddha. Then, wander the Hakata Machiya Folk Museum, which sheds light on life in the Meiji and Taishō eras, through period houses and handicrafts.

Which rugby games did Fukuoka host? Fukuoka's Hakatanomori Stadium hosted games during the first round. 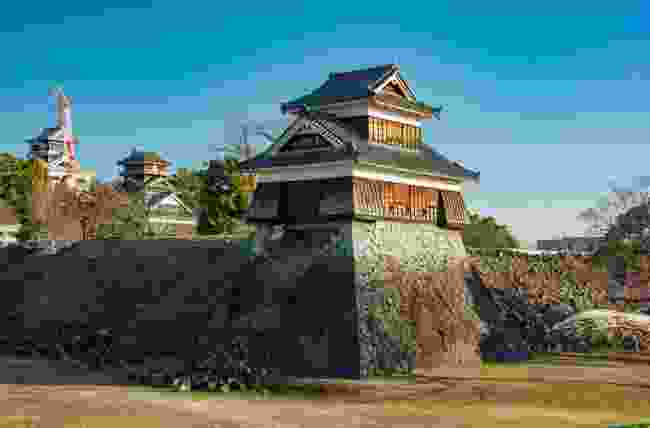 Kumamoto Castle after the 2016 earthquake (Shutterstock)

Kumamoto is a pretty city, located in the eponymous prefecture, in the centre of Kyushu. Towering Kumamoto Castle, one of urban Japan’s most striking, is the key sight, sweeping back to the 17th century.

Sadly, it was badly damaged in the 2016 earthquake, but its rebirth is symbolic of this resilient city. As is the soaring Fukuoka Tower, which rises 234m into the skies, offering an unparalleled panorama from its viewing deck.

Join the locals in their favourite pastimes of shopping and eating in Shimotori district, which tempts hungry travellers and residents alike with its multitude of sushi bars and ramen haunts. It also boasts lively drinking dens and karaoke bars. Retail opportunities veer from traditional handicrafts through to air-conditioned malls with all the latest in Japanese fashion.

Which rugby games did Kumamoto host? Kumamoto Stadium hosted games during the first round. 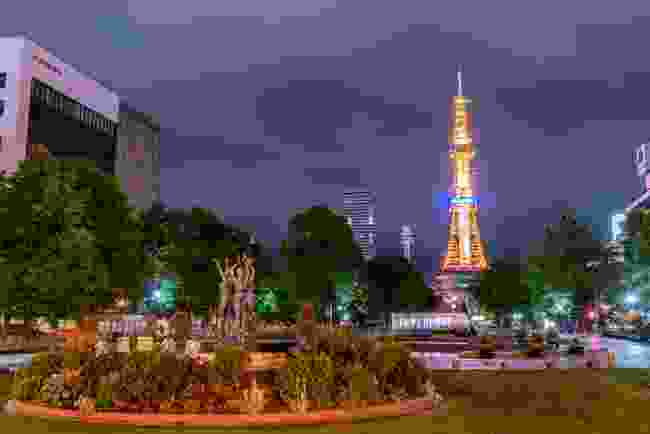 Japan’s fifth largest city, Sapporo, lives on the mountainous island of Hokkaido. Fans of the amber nectar will have been particularly keen to take in a game here, as the city is famous for its namesake beer.

Sapporo's tipple has been brewed here since 1891, and a visit to its elegant brewery is a must. But Sapporo also boasts the green lungs of Moerenuma Park (with its sculpture and play area) and the attractive Hokkaido University Botanical Garden. Both look equally pleasant in autumn, when fall colours take over.

Beyond the modern city, a Hokkaido of an altogether different kind is evoked at the open-air Historical Village of Hokkaido. This is old Japan, the kind of stylised image you may remember from your school days. 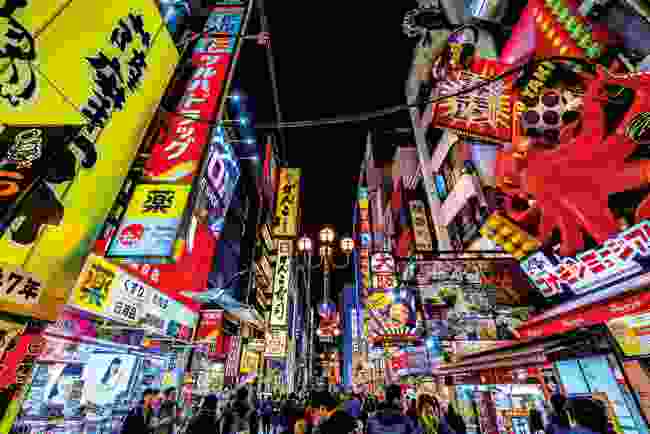 The earthy port city of Osaka, located in Osaka Prefecture, is as charmingly frenetic as Tokyo - but prices in its bountiful shops and malls are generally cheaper. Beside the benefit to your bank balance, there are plenty more reasons to visit.

A must-do for foodie travellers is the Kuromon Ichiba Market, where you can take on the culinary greatest hits of Japan - or even, if you're feeling a little dangerous, try the potentially fatal puffer fish. Just to be clear: we wouldn’t recommend it. A much safer bet is the delicious, freshly seared beef.

There are plenty of green spaces to enjoy in Osaka, too. Osaka Castle reclines in a vast park and offers views over the city for days. Afterwards, you can catch a ferry from Osaka Castle to Dōtonbori, cruising the waterways of this sprawling port city.

Which rugby games did Osaka host? Osaka hosted group games in East Osaka at the fitting Hanazono Rugby Stadium, said to be the oldest dedicated ruby stadium in Japan. 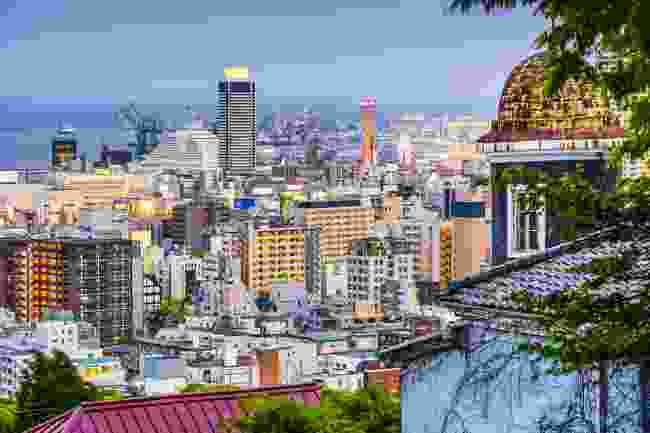 A near neighbour of Osaka is Kobe, in Central Japan's Hyogo Prefecture. If you’re in search of the famous Kobe beef, you will find it in abundance here, simply seared in local markets or jazzed up in restaurants.

Kobe is renowned in Japan for its fine eateries, as well as the lively bars around Sannomiya and Motomachi. If fine dining's not on the cards, the budget conscious among us can taste the magic by trying popular street food dish Kobe sobameshi, a mouth-watering collage of fried rice and fried noodles.

Another port city, Kobe enjoys a spectacular setting, surrounded by mountains and water. To learn more about its story, head for the Kobe Maritime Museum and also the Kobe City Museum. If you’ve got young rugby fans in tow, Oji Zoo tempts and also offers its own theme park.

Discover the best bits of the Kansai region here 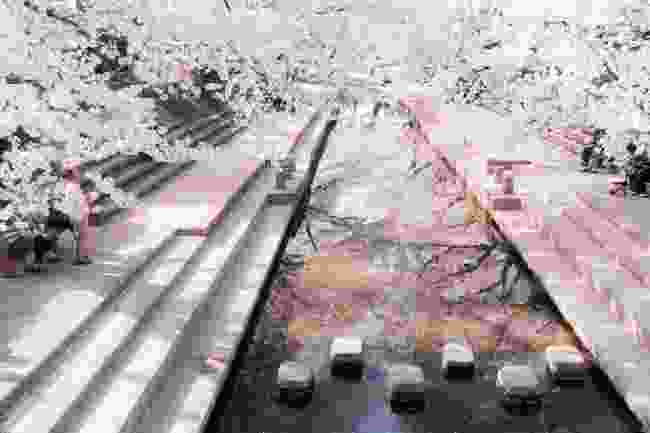 Kumagaya is in the Saitama Prefecture, handily located close to Tokyo. That doesn't mean you need to leave the city, though.

Kumagaya's key sight is the Menuma Shoden-zan Temple. Its a Buddhist place of worship, but whatever your faith, it’s a beguiling oasis to visit. You can explore the traditional streets dotted around it afterwards. There are myriad more temples to explore in in Kumagaya: a city with a rich historical and spiritual streak.

Then take yourself to nearby Nagatoro Iwadatami, a protected scenic reserve You can ease down on the sleepy river, enjoying the views of the Nagatoro Valley. A boatman will steer the way calmly through the rapids on Arakawa River, in a traditional craft. Kumagaya is also known for its delightful sakura (cherry blossom) blooms in the spring. 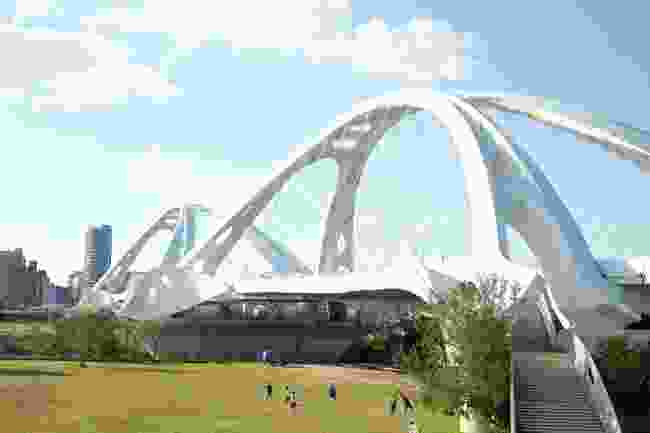 A structure in Toyota, Japan (Shutterstock)

Toyota in the Aichi Prefecture lies handily close to Nagoya (Japan’s fourth largest city). The most famous industrial giant in town is, of course, car manufacturer Toyota. So big, in fact, that the city was actually renamed after it in 1959 not the other way round!

The Toyota Kaikan Museum showcases the Toyota company's latest products and takes you through the company story. Motoring enthusiasts will love it as you can clamber inside many of the vehicles. You can take a tour of the factory, too.

You can't really escape the tentacles of the company here, another highlight being the Toyota Municipal Museum of Art, which boasts works by luminaries Salvador Dali, Irish painter Francis Bacon and Japanese potter Kawai Kanjirō. 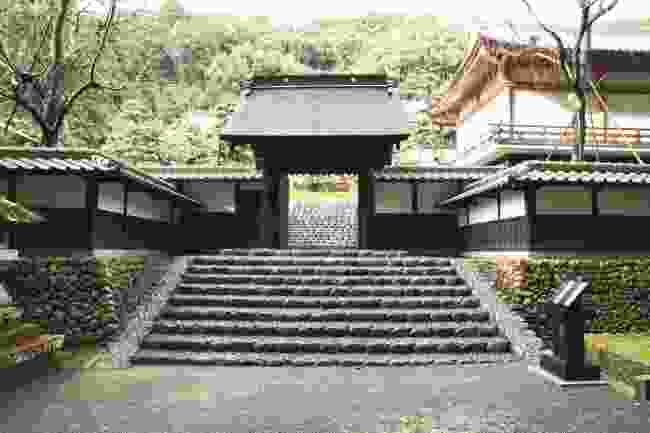 Fukuroi, in the Shizuoka Prefecture, is a spiritual city. Probably because it hosts or is close by to a treasure trove of temples.

Some of the most eye-catching are the Hattasan Soneiji Temple, Kasuisai Temple, and Yusanji Temple. You'll find zen with a great cup of green tea, too, as Shizuoka is famous for it. 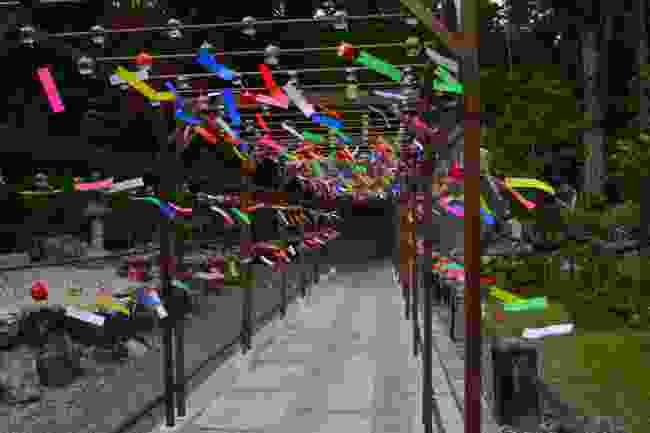 Iwata is probably best known as the headquarters for Yamaha. Motorbike enthusiasts and anyone with an interest in the world-famous motoring and music brand can travel to the Yamaha Communication Plaza, a star attraction of the region.

As well as racing cars and buggies, there is the chance to actually ride on a motorbike, with a superb restaurant on site, too. The gift shop is handy for souvenirs and a unique present to take home. 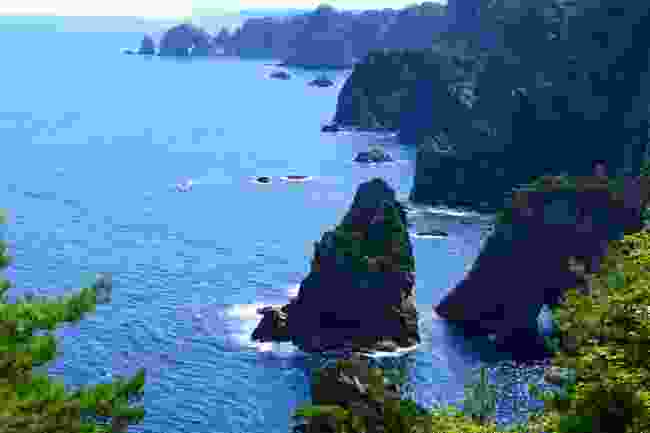 Last but certainly not least is Kamaishi, in the Iwate Prefecture. Their stadium name, Kamaishi Recovery Memorial Stadium, alludes to the devastating 2011 tsunami. It’s a dramatic and fitting tribute to the tragedy, and also the local will to surge back strongly.

Kamaishi is renowned in Japan for being an iron and steel pioneer, and that history has won it a place on UNESCO’s coveted World Heritage List. The Iron and Steel Museum will tell the whole tale.

The local fishing industry is also on the way back, and there are some great places to enjoy the boat-fresh bounty. See it for yourself at the Sunfish Kamaishi fish market. For nature lovers, plan a day excursion to the spectacularly beautiful Sanriku Fukkō National Park, reachable in approximately one hour, 20 minutes by car.

The ultimate Wanderlust guide to Kansai

The essential Wanderlust guide to Kyushu