3 traditional Easter recipes from the south of Italy

Throw an Easter dinner party with classic U’ cutturidd,’ Casatiello and Ciaudedda recipes from the Italian south, taken from Katie Parla's recipe book 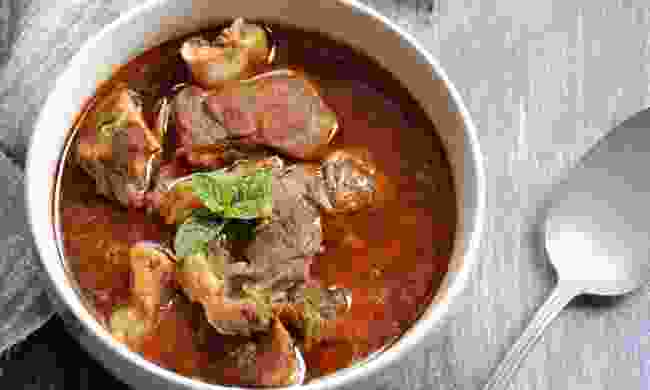 This Easter dish from the Murgia, the plateau straddling central Puglia and eastern Basilicata, is ancient shepherd food. The stew is called cutturidd’ d’ pecura vecchia in dialect in Basilicata, where it is made with mutton, and u’ cutturidd’ in Puglia, where it is made with suckling lamb. It was traditionally cooked in a pignata, a terra-cotta vessel that would be sealed with bread dough to steam the meat inside as it cooked, like a South Italian shepherd’s pie. This is a simplified version cooked in a pot on the stovetop.

How to make it:

Heat the olive oil in a large pot over medium-high heat. When the oil begins to shimmer, add the lamb, working in batches as needed to prevent overcrowding, and sear for 3 to 4 minutes, until golden brown on all sides. Remove the lamb from the pot and set aside.

Reduce the heat to medium-low and add the garlic and onion. Season with salt and cook until the onion is soft and translucent, about 15 minutes. Add the peperoncino and bay leaves and cook until fragrant, about 1 minute. Add the wine and scrape up any browned bits from the bottom of the pan. When the alcohol aroma dissipates and the liquid has nearly evaporated, about 3 minutes, return the lamb to the pan.

Add the tomatoes and enough stock so the meat is mostly submerged (you may not need all the stock). Season with salt. Cover the pot with the lid ajar and simmer until fork-tender but not quite falling off the bone, about 1½ hours. Add more warmed broth as needed to keep the lamb mostly submerged. Just before serving, stir in the parsley and wild fennel. Season with salt and black pepper. Serve at room temperature or reheated the next day. 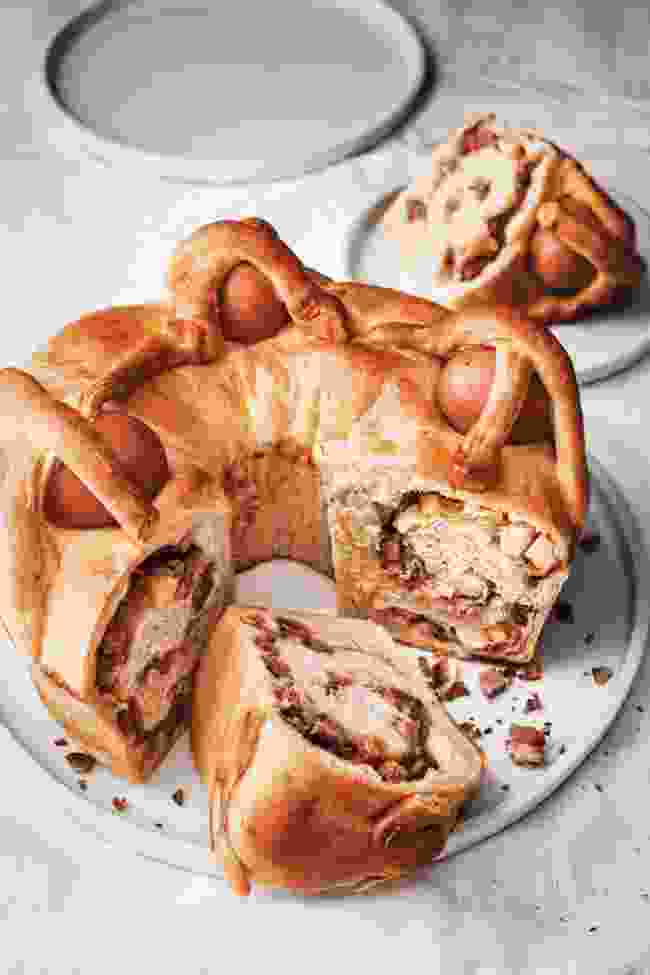 South Italy’s tables are renowned for their decadent holiday meals, but nothing quite rivals the multi-day feast of Easter. Especially after the ascetic Lenten period, devout Catholics are eager to break their fast and commemorate the resurrection with symbolic foods. For South-dwellers and especially Neapolitans, Casatiello is the iconic savoury bread for this holiday time. The best versions feature lard from recently slaughtered pigs and inlaid eggs symbolizing the Resurrection.

60 grams (2 ounces) lard, at room temperature, plus more for the pan

How to make the dough:

In the bowl of a stand mixer fitted with the dough hook, combine the flour, yeast, salt, pepper, lard, and filtered water. Mix on low until the dough starts to come together and there is no more dry flour in the bowl, about 2 minutes. Increase the speed to medium and mix until smooth, elastic, and soft, but not sticky, about 10 minutes. Turn the dough out onto a work surface, shape into a tight ball, and return to the bowl of the stand mixer. Cover the bowl with plastic wrap and allow the dough to rest at room temperature until it has almost tripled in size, about 3 hours.

When the dough has risen, make the filling:

If you are going to bake eggs into the top of the casatiello, cut away about 60 grams (2 ounces) of the dough and set it aside to use as “egg cages.” Roll out the remaining dough into a rectangle that measures approximately 12 × 20 inches (this can be done on an unfloured surface thanks to the fat content of the dough, which will keep it from sticking).

Using a spatula, spread the lard over the dough. Sprinkle the pepper and Pecorino Romano over the lard. Distribute the salami, ham, provolone, semiaged pecorino, pancetta, and prosciutto over the dough, pressing lightly and leaving a 1-inch border along the edge of the long side of the dough farthest from you. Starting from the long side closest to you, roll up the dough as tightly as possible without tearing it so you have a 20-inch-long roll. Seal the roll by pinching the seam along its entire length, then pinching closed the open ends, stuffing in any rogue bits of cheese or salami before sealing Grease a Bundt pan.

Fit the roll snugly inside, connecting the ends by pinching them together. Place the 4 hard-boiled eggs (if using) on top of the dough, spacing them an equal distance apart. Gently press them into the dough. Roll the reserved dough into 8 equal strands and fasten them around each egg in the sign of a cross. Press the ends into the top of the casatiello. Cover with a kitchen towel and set aside to rise at room temperature for 1 hour. Preheat the oven to 350°F.

Brush the egg over the dough and bake until the casatiello starts to brown, about 1 hour. If it darkens too quickly, cover with aluminum foil for the remaining baking time. Remove the casatiello from the oven and set aside to cool for 1 hour before unmolding. Unmold and allow the casatiello to rest on a wire rack for 2 hours and up to 18 hours before slicing. Serve at room temperature or lightly toasted. 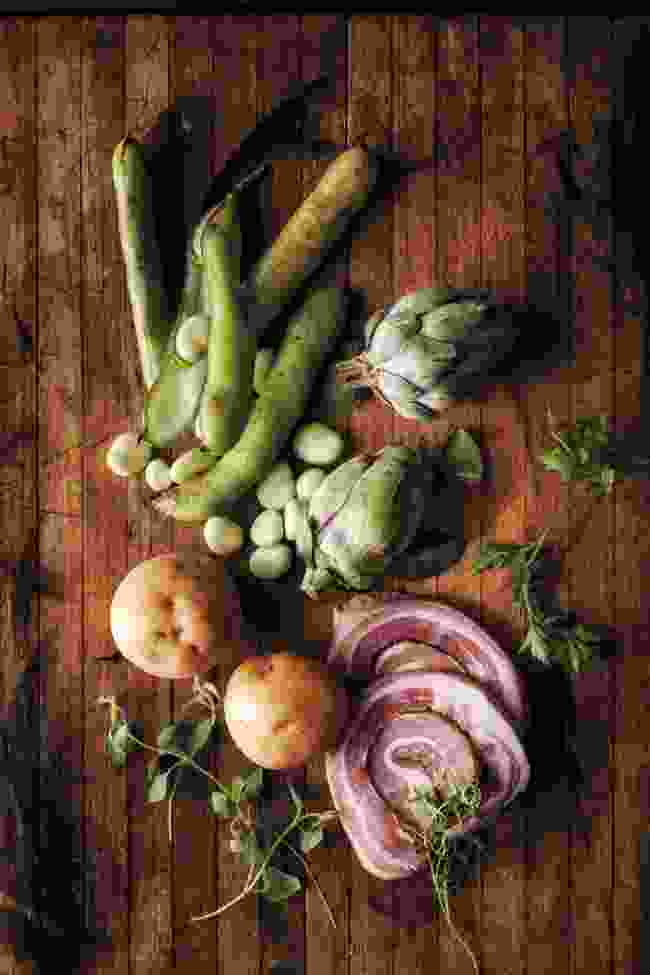 This springtime stew is made in that narrow period in which artichokes and favas are both in season and the young favas are sweet and tender. It’s not quite brothy, having absorbed most of the liquid during the simmering process, but it’s not dry, either. It can be a side dish or even a main, and in fact it’s quite popular as a secondo around Lent (minus the pancetta, of course).

How to make it:

Heat the olive oil in a large skillet over low heat. When the oil begins to shimmer, add the pancetta. Cook until the pancetta fat has rendered, about 10 minutes, then add the onion and garlic and season with salt.

Cook until the garlic just begins to turn golden, about 5 minutes, then add the artichokes, potatoes, herbs, and pepper. Season once again with salt and stir to combine the ingredients. Increase the heat to high and add the wine.

Add the favas, cover, and cook until the favas are soft and most of the liquid has been absorbed, about 20 minutes. If it looks like it’s drying out too much, add more broth as needed (you may not need all the broth). Season with salt and pepper. Serve warm or at room temperature. 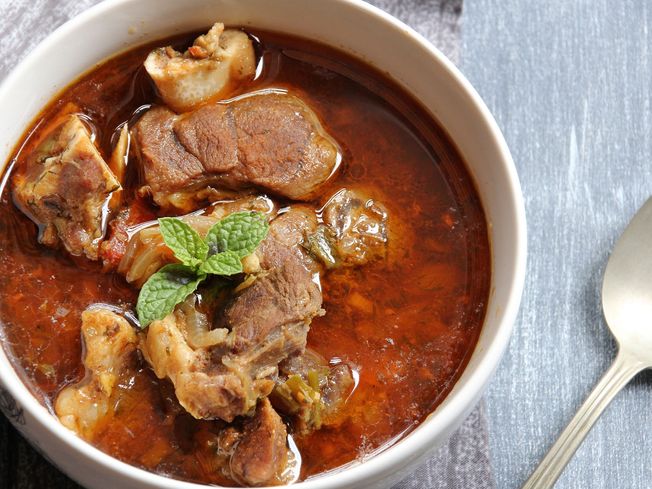 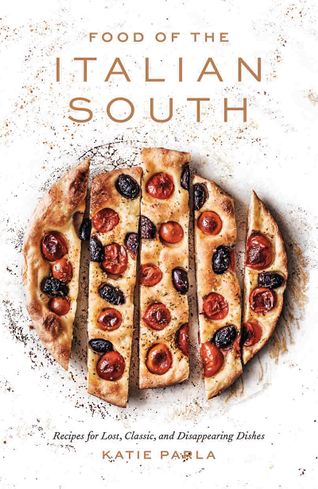 Food of the Italian South

Katie Parla moved to Rome in 2003 after graduating from Yale. She holds a sommelier certificate and a master’s degree in Italian gastronomic culture. She writes about Roman food and beverage culture, and has contributed to and edited travel guides. She often appears as a Rome expert on the History Channel and the university lecture circuit. Her book Food of the Italian South includes 85 authentic recipes and 100 photographs that capture the cultural and cooking traditions of the Italian south, from the mountains to the coast. Katie Parla shares original and reimagined recipes, along with historical and cultural insights that encapsulate the rugged beaches, mountains, quiet towns and culinary traditions unique to the south of Italy.

The Wanderlust Guide to the best of Italy