Langjökull glacier has always been out of bounds – but now a new tour takes you deep inside Europe's second-largest ice mass, on a tour of the icy underworld

4 mins
No self-respecting writer goes anywhere without a notebook, but mine was getting horribly soggy. Fat plops of water landed square in the middle of the page, rendering my scrawl even more undecipherable than usual – but right now, notes were the least of my worries. I suspected the ceiling was melting – and we were only 10 metres into the ice tunnel.

“Ah, no, it's just glacial run-off,” grinned my guide Orri as I squinted up at the roof, dodging a drop in the eye. “It's not the ice melting – it's nothing to be worried about. There's no danger of the ceiling collapsing.” Good job too: above our dripping cavern, 40 metres of snow and ice lay between our heads and the surface. If the ceiling fell in, we'd be toast. 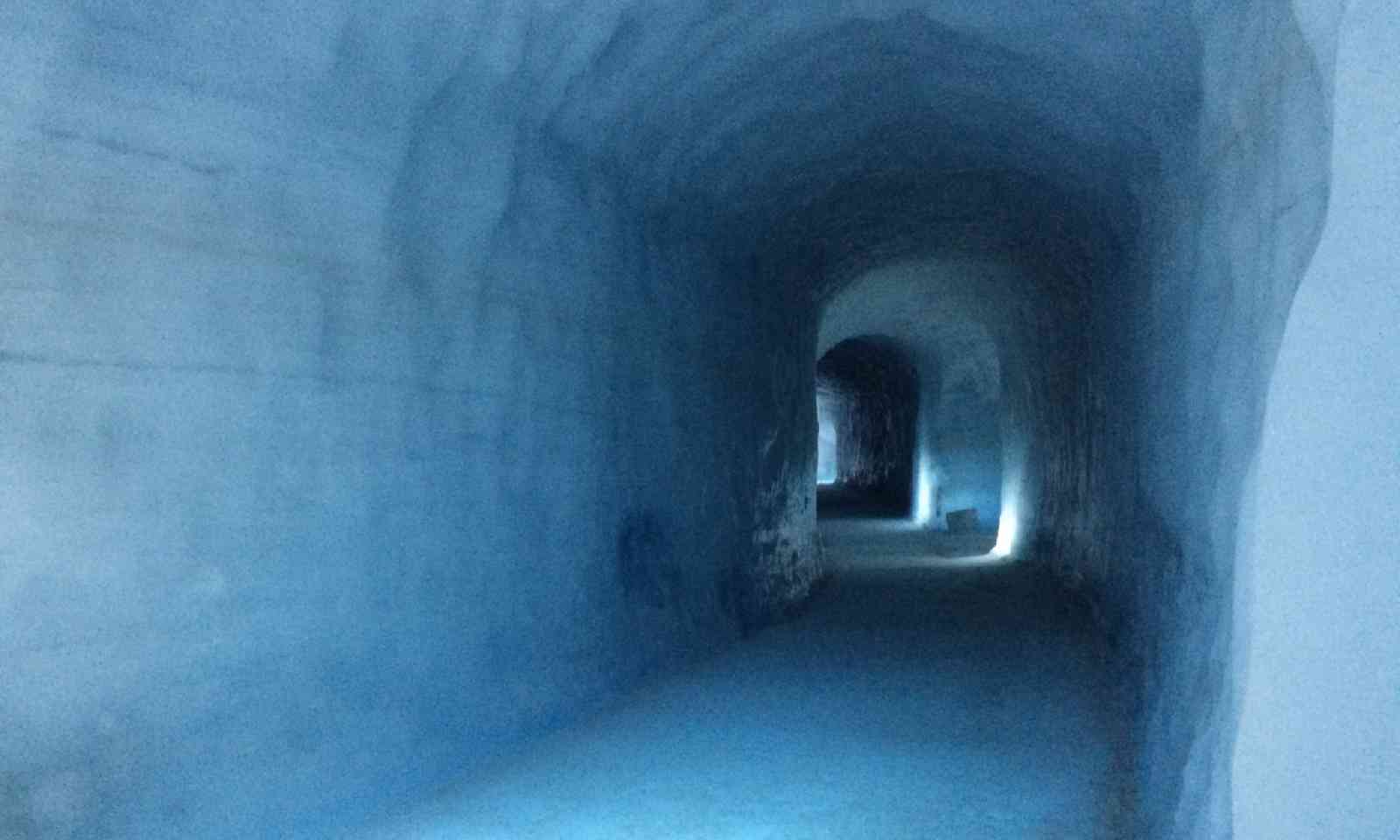 Langjökull glacier should, strictly speaking, be out of bounds. For centuries, Icelanders have kept as far away from its ice as possible, telling tales of trolls and 'little people' to deter their children from venturing onto its frozen slopes. It's only in recent years that tourism has touched Europe's second-largest ice mass, with snowmobile trails and 8-wheel monster truck tours crossing the white – but I was one of the first travellers to actually explore inside the glacier.

I snapped my notebook shut and squinted into the gloom. It didn't look like much so far – in fact, outside was much more impressive. We'd arrived at the tunnel's mouth in blazing sunshine, a rare cloudless day that made the snow dazzle. It had taken just 30 minutes to reach the entrance in lurching 8WD ice trucks – retired German missile launchers, converted into 12-gear glacier-crossing beasts. We rattled around in the back, wrapped up in ski jackets, squinting into the sun as our ears popped and the cold crept into our boots. 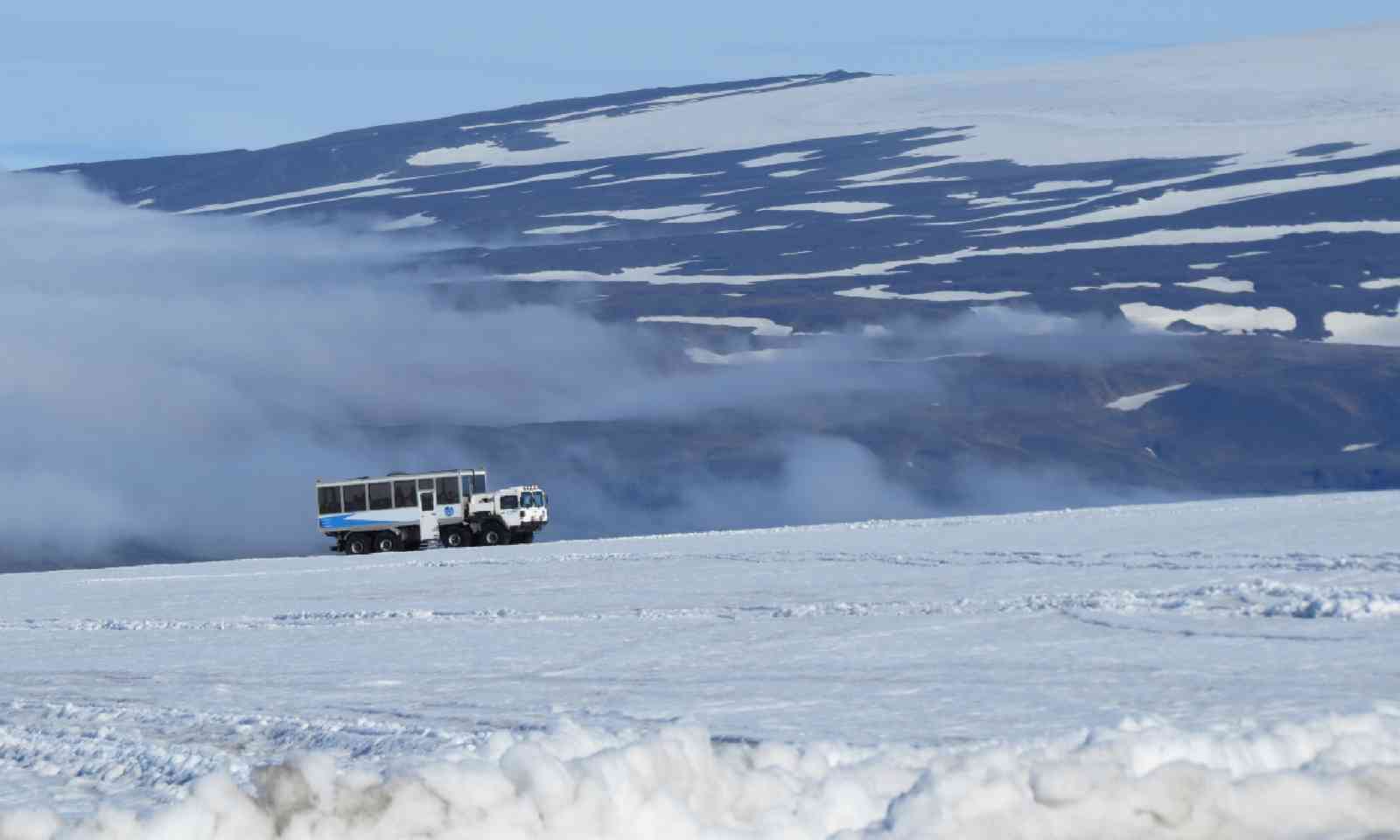 Above the cloud line, black mountain ridges jutted through the glacier up into the cerulean sky, and the air was crisp and pure – up here, we could see across snow, mountains and scrub-strewn flatlands to Iceland's west coast, to the Snæfellsnes Peninsula, over 100 miles away. The ice-covered peak of Snæfellsjökull volcano glinted on the horizon.

We pulled on crampons, our breath clouding the air, and slipped into the cavern – the entrance marked by a simple metal sign stuck in the snow. Away from the sun's glare, the tunnel seemed dark at first, but it transformed in front of our widening eyes. Hundreds – maybe thousands – of LED bulbs are nestled deep within the ice, their blue and white light glistening through the walls. I'd worried about feeling claustrophobic, but the tunnel walls were high – although drippy – and wide enough to accommodate four people. 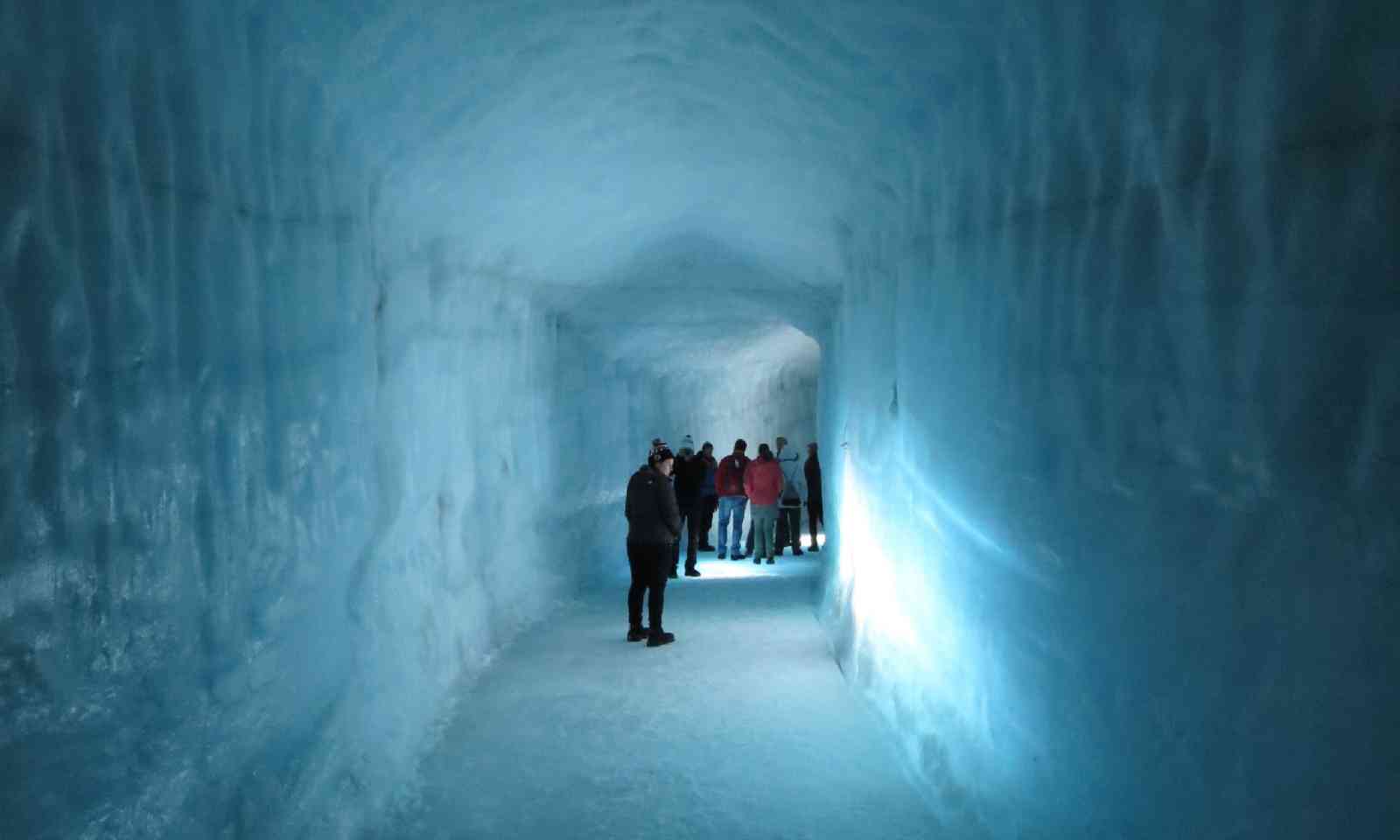 I sneaked ahead of the group, running my fingers along the smooth ice wall until I could no longer feel the tips. My nose tingled, the cold air made me gasp – but I hardly noticed. The twinkling ice lights led me deeper, revealing a warren of carved-out caverns and even a tiny chapel hewn out of the frost, its altar a giant ice cube. A small sign informed me that 200 metres of thick ice lay between my feet and the bedrock; I shivered at my insignificance.

“You will literally go back in time as you walk through the tunnel,” Orri was saying as I crept back to the group. “At the mouth of the tunnel, the snow is from last year – but the deeper we go, the older the ice gets.”

As we walked, Orri pointed out grey stripes in the ice; “This is volcanic ash,” he said as I tried to count the seams, which radiated out like rings on a tree trunk. “Every time there is an eruption, ash settles on the glacier.” I quickly lost count, the faint lines blurring into a grey haze – a physical reminder of Iceland's ferocious geology. 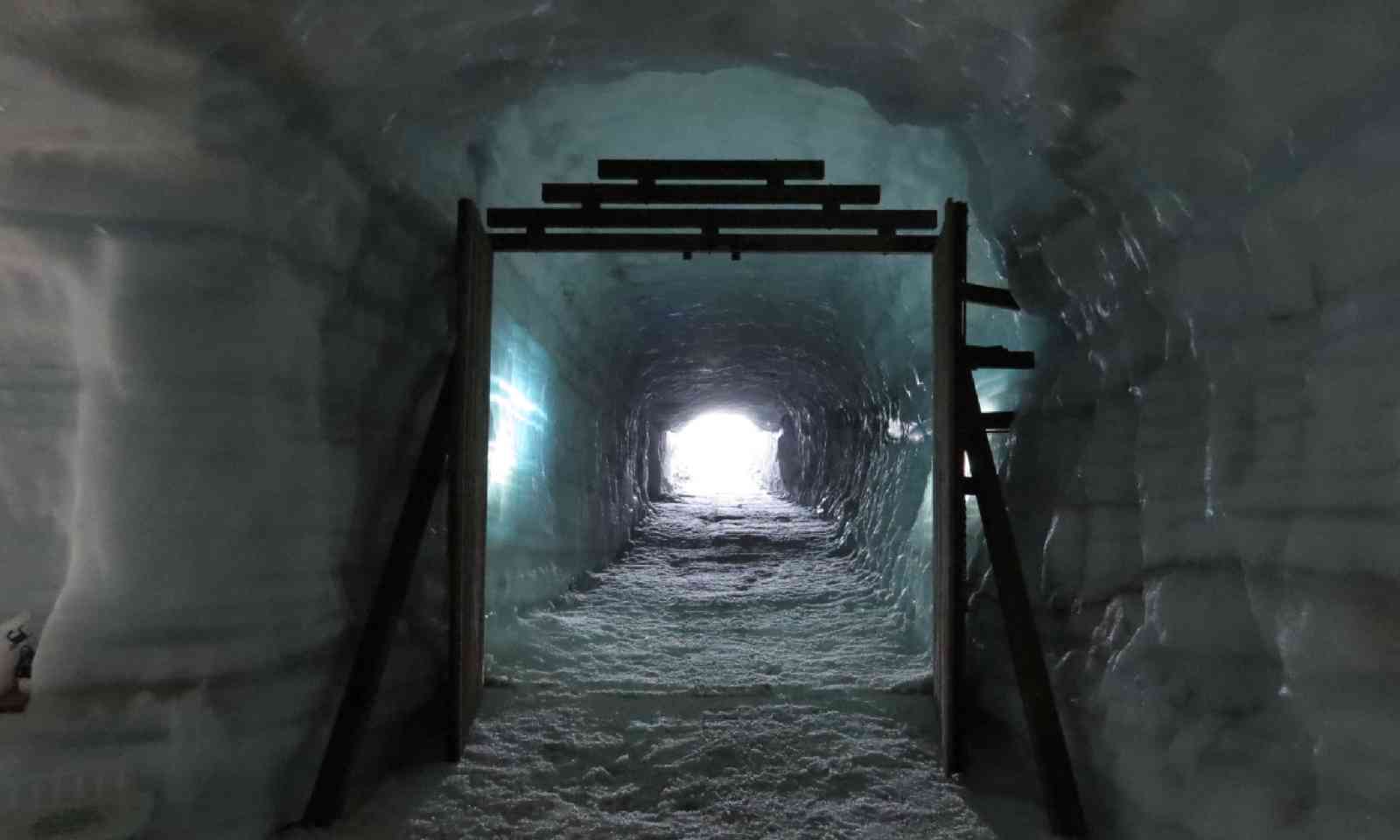 “If there is an earthquake, it is safer to be in here than in a building,” said Orri. “'We have never found pieces of ice on the floor and there's no danger of it falling in.” That said, the tunnel isn't a permanent fixture: like all glaciers, Langjökull is moving – and melting.

“The cave has a lifespan of 10 to 15 years,” said Orri. “When it's no longer safe we will pull out the power cables and benches, and it will be like we were never here.” Global warming is a tangible threat in Iceland: environmentalists believe that the glacier tongue will completely melt within 150 years.

We walked further, marvelling as the gin-clear ice deepened into a sapphire blue. After roughly 1,000 years of compression within the glacier, all of the air bubbles have gone – and it is stronger and more dense than 'regular' ice. Thanks to its colour and clarity, it is sought after by expensive bars all over the world – where it ends its life jangling in vodka glasses. 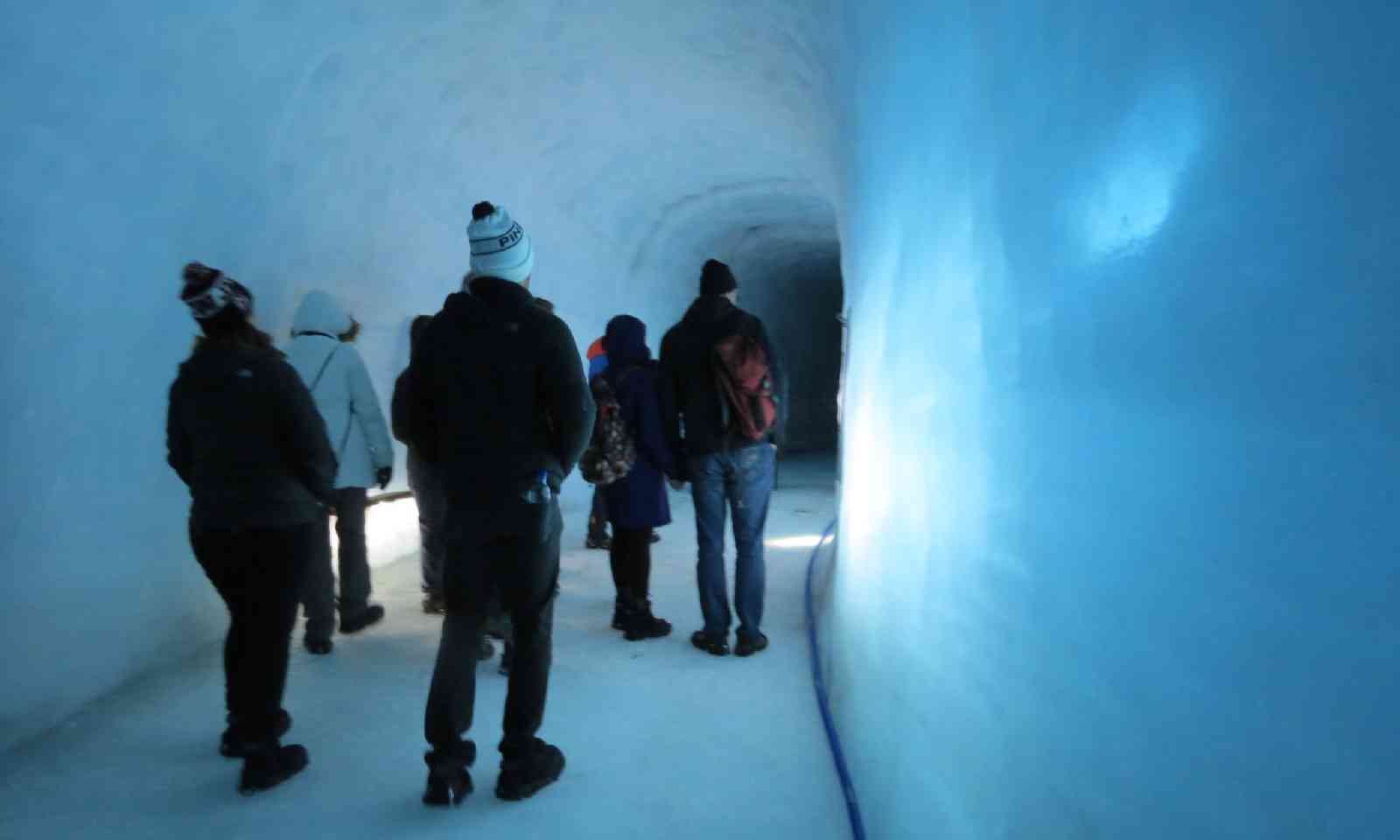 The older ice also has great acoustics – and the last gig of 2015's Reykjavik Summer Solstice festival was held within these frozen walls. “It was great fun, and a totally cool location for the DJ set,” said Orri proudly. “We could smell the wine for days though – the tunnel is naturally ventilated, but that wasn't enough to cope with the aftermath of the party."

I hope the Geology department from the University of Iceland were invited to the knees up: they provided the first burst of hard graft in the tunnel, gathering data as they bore through the ice with specialist tools. A team of farmers were enlisted to help too, some travelling up to four hours to lend their manpower to the cause. The tunnel – a 500-metre circular loop – took just a few months to excavate, and it opened for visitors in June 2015. 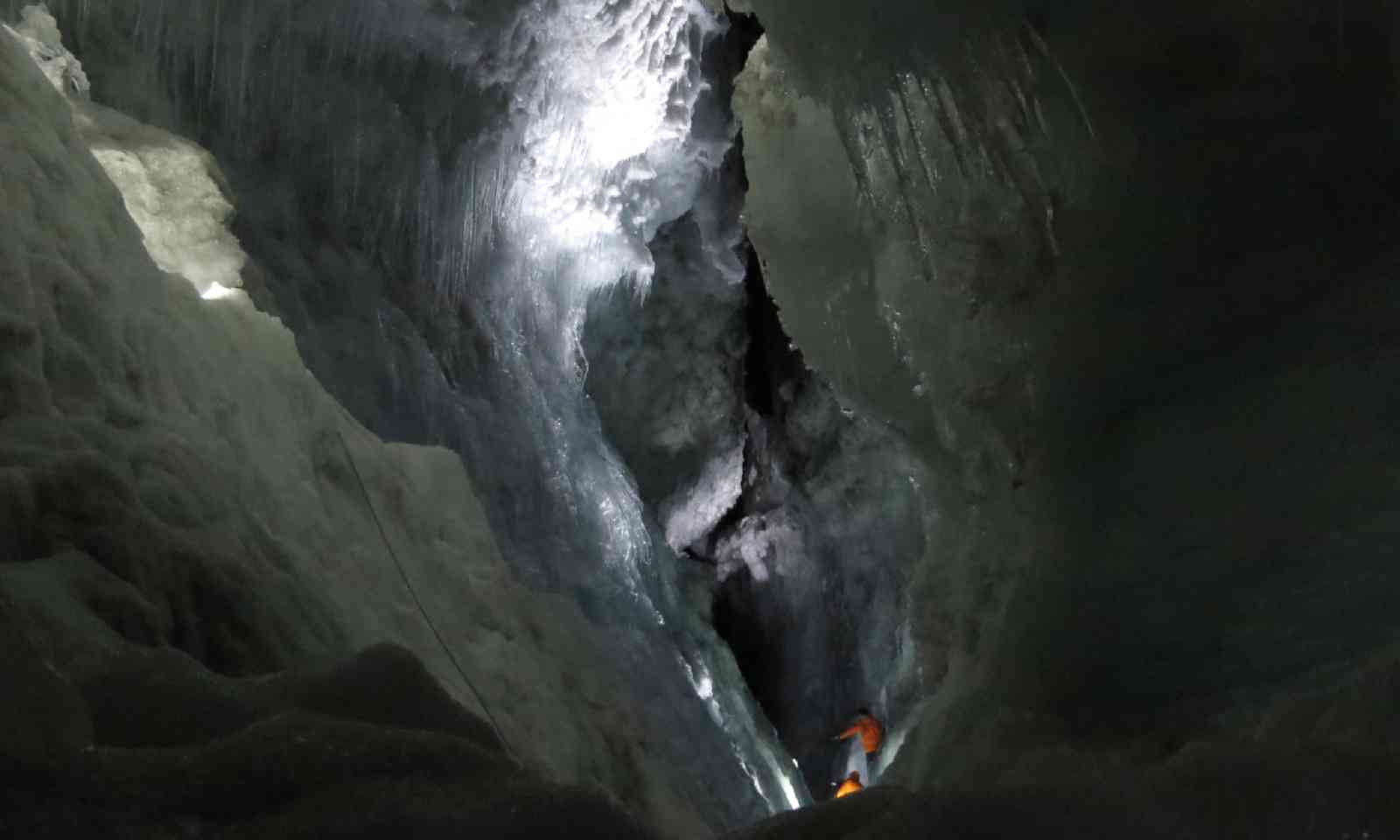 A few metres from the end of the cavern, the excavation team stumbled upon a 30-metre cravasse – a spectacular natural finale to the tunnel tour. It's a whopping rip inside the glacier, all metre-long icicles and glittering ice razors, like a Disney villain's lair.

We stopped, slack-jawed at the sight of this menacing toothy grin – without the warm glow of LED lights everything looked colder and harsher. Inside the gloom, below our sturdy wooden walkway, a couple of cameramen scuttled around in the narrow wedge, their flash guns flooding the cravasse like lightening bolts. I shivered again – insignificant yet invigorated – and turned towards the light at the end of the tunnel.


The author travelled with Discover the World, on a 7-night Journey to the Centre of the Earth itinerary. Into the Glacier is available as an additional excursion, all year round – click here for more details.


All images by Hazel Plush