Indonesia is a country of rich diversity, with numerous religions adding multiple layers to its vibrant culture. Author Agustinus Wibowo reveals the religious celebrations worth seeking out... 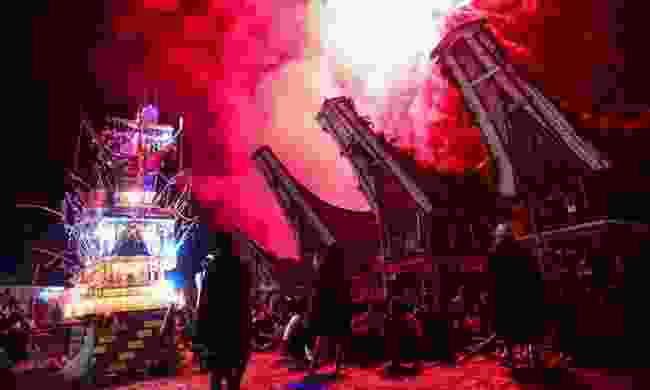 Unlike other places in the world, death in Toraja is not a sombre or private affair. The local religion, Aluk To Dolo (the way of the ancestors), has turned funerals into cheerful mass celebrations, which can cost up to millions of dollars. Similar to a cultural festival, you can witness all of the highlights of Torajan culture, including dancing, singing, art, and even bullfighting contests. And don't worry about turning up uninvited to a funeral - all visitors are very much welcome.

Where: All over the Toraja region, South Sulawesi.

When to visit: Funerals take place throughout the year, but August is the busiest month. 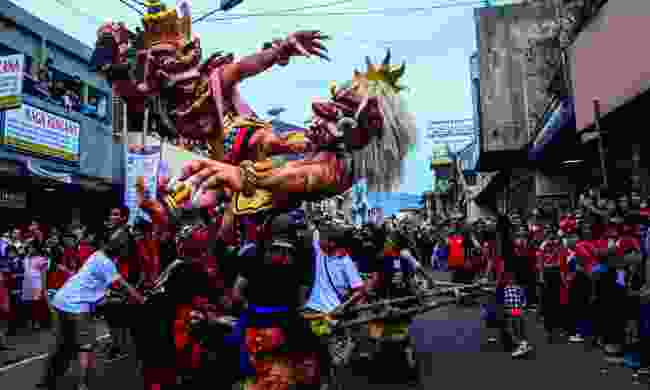 If you want an alternative New Year experience in March, try Bali. The Balinese Hindus celebrate their New Year meditating in total silence. For 24 hours of Nyepi (Day of Silence), the whole island is completely isolated from the outside world, with the internet cut off, travel and activities postponed, and loud noises prohibited.

One day before Nyepi, the locals will march huge and scary statues in a carnival-like atmosphere throughout the main streets, symbolising the evils inside us that can be destroyed through meditation during the day of silence.

Where: All over Bali. 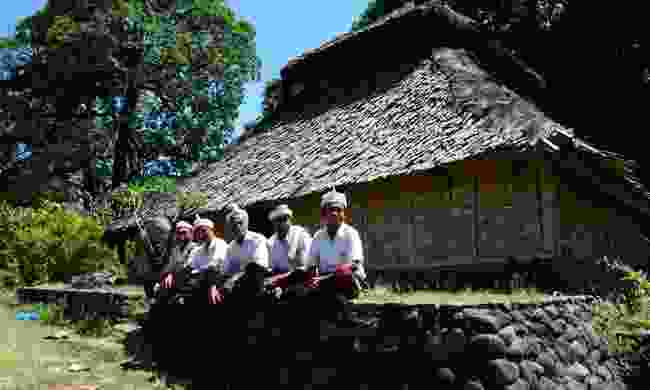 When Islam first spread widely in Indonesia some five centuries ago, the religion blended in with local beliefs. In the tiny village of Bayan, under the feet of the mighty volcano Rinjani, you still can discover one form of the earliest Indonesian ‘localised Islam’. The Wetu Telu Muslim community celebrate the Islamic holiday Eid annually in their historical ancient mosque.

Their rituals emphasise the integration of human and nature. Amongst the rituals, women wash rice together in the river, while men bring their harvest products to the mosque to get blessed. Visitors are very much welcomed, but encouraged to follow the rules of local dress, which involves wearing a sarong-like cloth for both men and women.

Where: The village of Bayan, Eastern Lombok.

When to visit: The community celebrate Eid 3 days after conventional Islam. The next event will be in June 2019.

4. Blessing on the birthday of the prophet, Yogyakarta 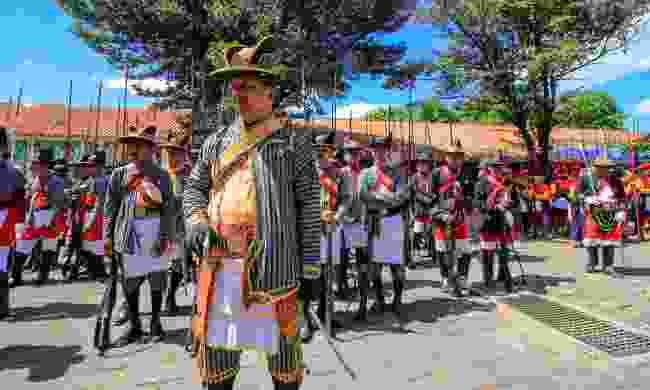 Soldiers of the Sultan Palace in Yogyakarta (Shutterstock)

Every year the city of Yogyakarta holds a colossal celebration for a whole week to commemorate the birthday of Prophet Muhammad. The high-point is on the final day, when a ruling Sultan conducts a parade of gunungans, huge models of mountains made with sticky rice, sweets, snacks and fruits. Locals on the streets help themselves to the gunungans, as they are supposed to bring good luck and prosperity to their households.

Where: The Sultan palace, Yogyakarta. 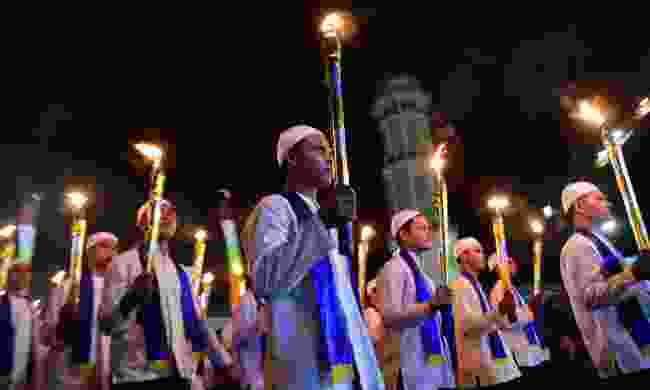 Travelling in Aceh during Ramadan might be difficult for visitors who don't practice, as restaurants are closed throughout the day. But if you come on the final day, the spirit of festivities is in full swing.

Celebrations are centred in the Grand Mosque of the region’s capital Banda Aceh, a striking landmark built by the Dutch with Mughal-style design. From the mosque, colourful religious parades march across the city, celebrating the greatness of God.

Where: The city of Banda Aceh.

Time to visit: The end of Ramadan, which next occurs in June 2019. 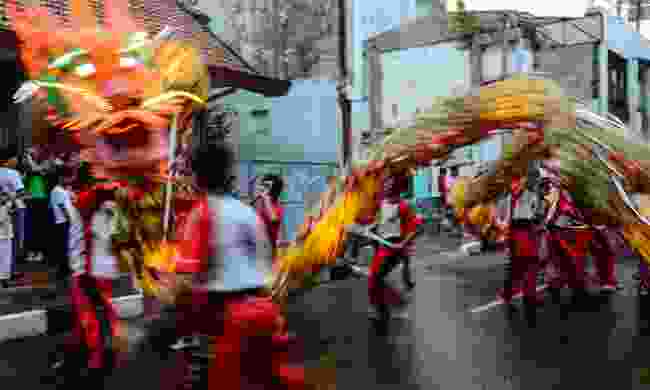 Once restricted, Chinese religions and traditions can now be followed freely in Indonesia. Every year, the city of Bogor hosts the Cap Go Meh festival to mark the 15th day after the Chinese New Year, with devotees parading statues of gods and ancestors from local Chinese temples all around the city.

This festival has turned into a city-wide celebration, and now the parading groups are not only Chinese, but Indonesians from all different cultural and religious backgrounds, showing the diversity of Indonesian culture.

Where: The city of Bogor.

Time to visit: The Chinese New Year normally falls in January or February. The next event will be in February 2020. 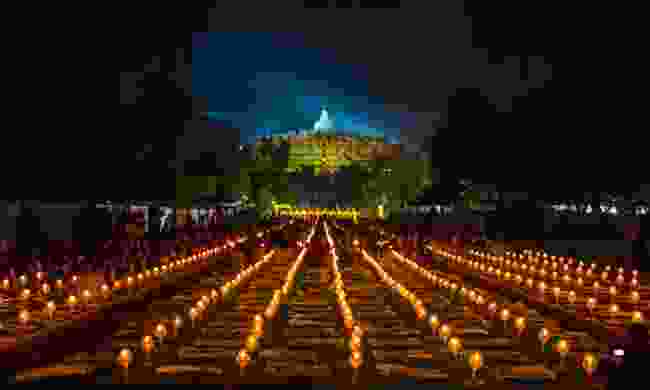 Indonesia is has the largest Muslim population in the world, but most of the country’s history was actually dominated by Hinduism and Buddhism. Indeed, Indonesia is home to the world’s largest Buddhist temple, the 9th century Borobudur.

Borobudur is the main site for the commemoration of Vesak, the birthday of the Buddha. Buddhists from all over Indonesia come here to conduct religious ceremonies and meditations. Visitors from any religions are welcomed to participate in the ceremony. At the end of the ceremony, you can join flying thousands of lampions to the night sky. Don’t forget to make a wish!

8. Easter in the Indies, Larantuka, Flores 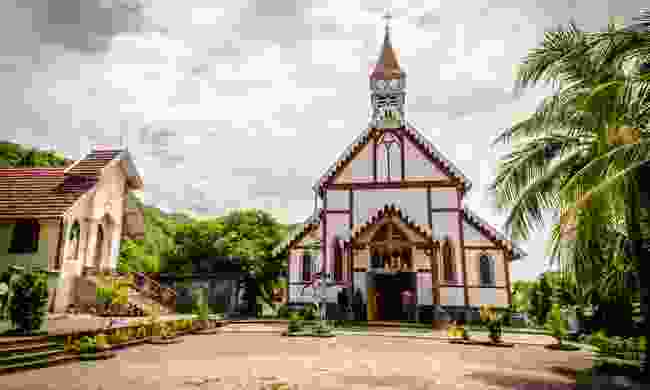 Due to its history as a Dutch colony, the majority of the inhabitants of Flores are Catholic. In the city of Larantuka, the Easter celebrations attract thousands of pilgrims from all over the country, where big processions are a magical blend of Christianity and local traditions. At the peak of the procession, a huge sacred statue of the Madonna is paraded around the city, followed by long lines of followers.

Where: The city of Larantuka, Flores.

Agustinus Wibowo is a prominent Indonesian travel writer. Agustinus' latest work, 'Us And Them', reveals the roots of human identities and conflicts, and will be published later this year.

View his past works on Amazon.