For a city that is so flat, the Thai capital has no shortage of stunning vistas, whether you’re at street level or in a rooftop bar 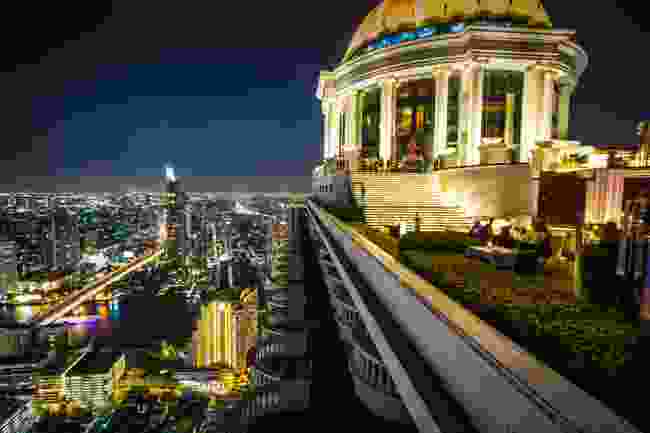 Expect airport-style security at this glitzy skyscraper, which is home to the Lebua hotel. Exit the lift on the 64th floor and you’ll step out onto an open-air staircase that descends to the restaurant Sirocco. But first you’ll notice the lit-up Sky Bar.

Cocktails such as Hangovertinis – created in homage to Hangover 2, which was filmed here – are priced as high as you are standing, but the views make this extravagant treat worth it. This is one of the world’s highest rooftop bars, with 360-degree views of Bangkok. As you sip your cocktail you can appreciate the snake-like curves of the Chao Phraya River meandering through the city 250m below. 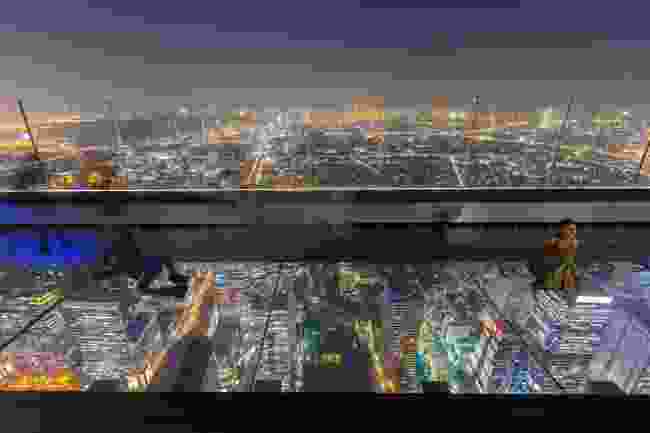 It might look like an unfinished Lego project, but you can truly soar above the city on Thailand’s tallest observation deck in the Silom district. For a fee, you can walk on this skyscraper deck’s vertigo-inducing glass bottom floor.

Standing on the 78th floor, you will be hovering 314m above the streets of Bangkok. If looking down is too nauseating, you can enjoy panoramic views from the tiered seating steps that lead to ‘The Peak’ (an extra four metres high). There is also an indoor observation deck on the 74th floor. Visit in the late afternoon to watch day turn into the night, when the city lights begin to twinkle. 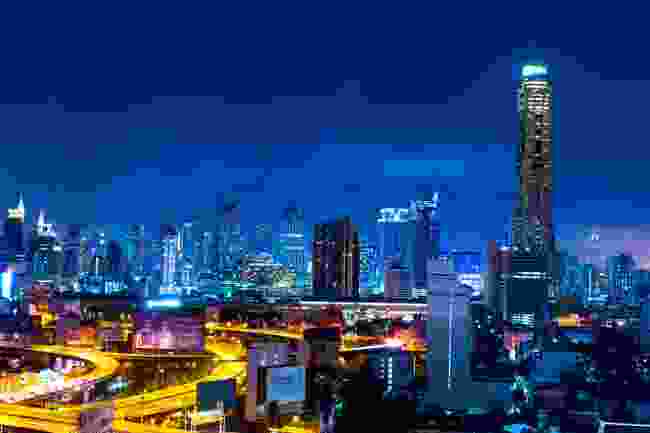 Before being knocked off its sky-high perch in 2016, Baiyoke Tower II was Bangkok’s tallest building – a title it had held since 1997.

On a clear, pollution-free day, you might be able to see as far as the Gulf of Thailand from its two observation decks. The 77th floor is an enclosed area with maps and multimedia screens. Grab a drink (included in the admission fee) on the 83rd floor before ascending to the dizzying 84th floor. Its revolving outdoor viewing platform means you can stand still and get the full panoramic view of the city 300m above street level. 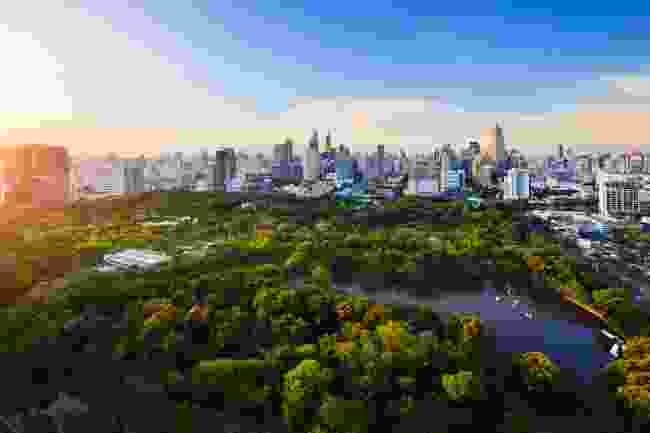 This rooftop bar in the luxurious SO/Bangkok hotel may only be moderately high in comparison to other sites in the city, but it could be the finest one yet.

At only 30 floors, it’s not quite “ear popping” high, but what it lacks in height it makes up for in views. What makes this view so unique is that you can admire the oasis of Lumphini Park, with skyscrapers in the distance reminding you that you are still in Bangkok. 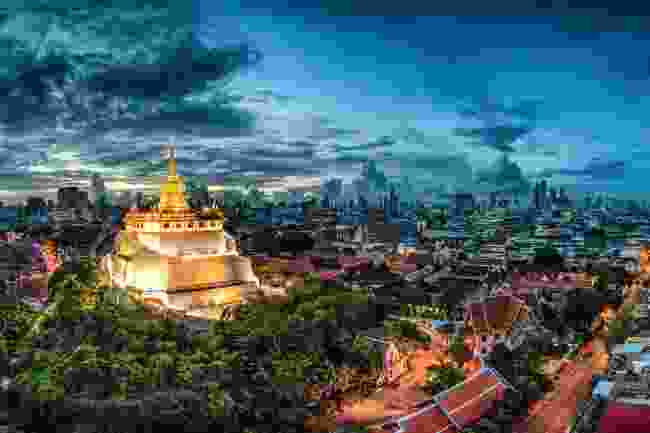 The unmistakable sight of Wat Saket, or as it is commonly known, the Golden Mount, seems to invite you to get closer, as it shimmers in sunshine like a beacon in the city.

Built on top of a manmade 80m-high hill, it was once the highest point in Bangkok. This 18th-century temple is one of Bangkok’s most important religious sites and an affordable way to take in the city’s views. There are no hyper-speed elevators here. To reach the top means tackling the gradual incline via 300-odd spiralling steps. But your reward is a view in every direction along with the occasional sounds of bells and gongs struck by locals for good luck.

At the foot of the Golden Mount, look out for a vine-covered cemetery, which was used as a mass burial ground for plague victims in the late 18th century. 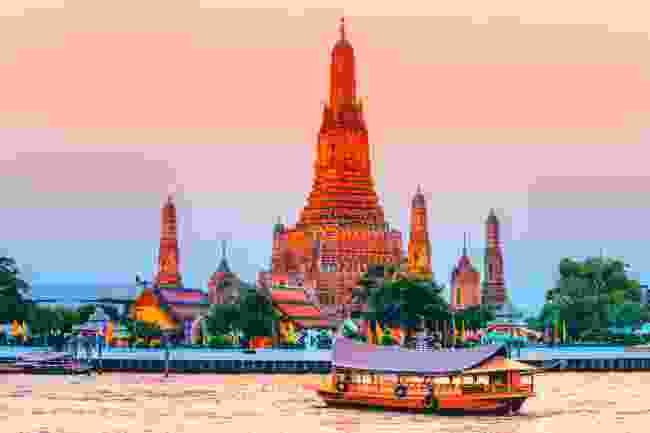 Nothing conjures up the romanticism of Bangkok more than sitting beside the Chao Phraya River watching the sun set behind Wat Arun or the ‘Temple of Dawn’.

The best view is arguably from Sala Rattanakosin hotel’s rooftop bar, which is directly opposite Wat Arun. Arrive early and grab a table to watch the spires become illuminated with the last rays of the day as the sun dips below the horizon.

Alternatively, The Deck by Arun Residence next door also has great views, while a little further south, at the end of Tha Kham Alley, steps lead to the riverfront with an unobstructed view of Wat Arun. 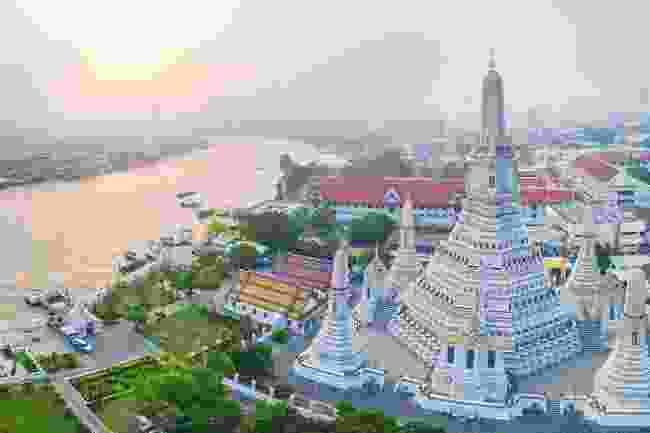 When you have finished taking in the view of Wat Arun from across the river, hop on a boat for a closer look. Wat Arun is one of Thailand’s most beautiful and famous temples, with spires intricately decorated with coloured glass and Chinese porcelain that deserve closer admiration. The central spire stands at around 80m and represents Mount Meru in Tanzania – the home of the gods and the centre of all physical and spiritual universes in Hindu cosmology.

Climbing the steep steps of the central spire to the highest reachable point offers incredible views of the Chao Phraya River, Grand Palace and Wat Pho. 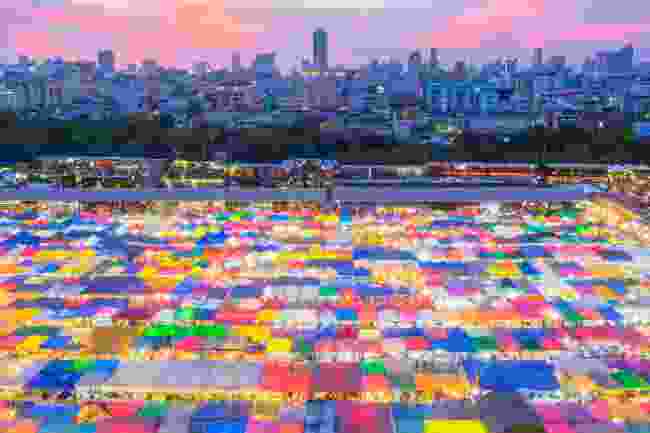 This night market in the Ratchada area is a smaller version of the Srinagarindra Train Night Market, but its more central location makes it more convenient to visit.

Catch the train to Thailand Cultural Centre and go to Esplanade Shopping Mall and then on to the highest level of the car park. While this spot has been popular with photographers for years, it rarely sees travellers, but the market’s rainbow-coloured canopies are a visual feast for anyone. 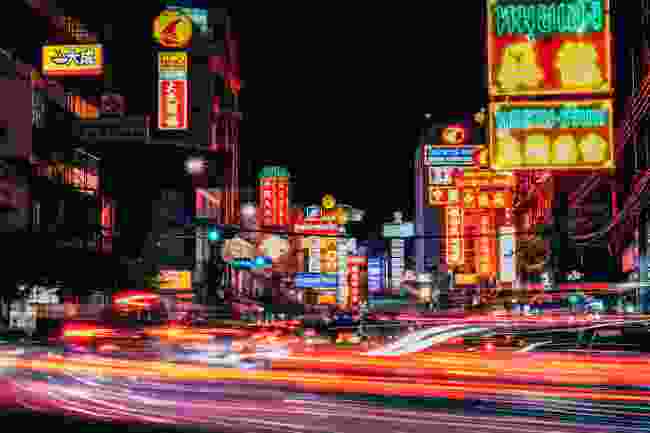 For all the awe-inspiring views from Bangkok’s rooftop bars, nothing beats experiencing this metropolitan heart of Thailand from the ground. Dodging tuk-tuks, feasting on street food and browsing markets are often what will linger in your memory.

When the neon lights are in full force at night, just walking along Yaowarat Road in Chinatown is enough to make you fall in love with Bangkok. For the best view, walk to the junction of Yaowarat Road and Lamphun Chai and look back. You will see layer upon layer of lights from neon signs, buildings and cars in a dazzling spectacle of street life.