How travelling can improve your child’s grades

As luck would have it, my daughter’s school project to make an African instrument coincided with a half-term family trip to Fez.

Drums are an integral part of life in Morocco. They are a common sight at festivals and social gatherings and a popular souvenir for tourists in the medinas of Marrakech and Fez. Just buying a drum would be cheating, of course. But a quick Internet search revealed a local company offering drum-making courses in the heart of Fès el-Bali.

On our first night in Fez, we ate our evening meal on the terrace of our riad, before an unseasonal shower sent us scampering indoors. A pair of drummers serenaded us with a mournful tale over a rhythmic beat. I noted with alarm that the drums were quite big. I hoped the one my daughter was making wasn’t so large. I hadn’t booked check-in luggage on our flight home.

The next morning we were met by Noureddine, our guide for the day. Noureddine had recently translated for some American researchers who had come to Fez to study drumming at the university, so he was quite the expert. We drove to the top of the medina, near Bab Bou Jeloud, the Blue Gate, and plunged into the medieval souk. 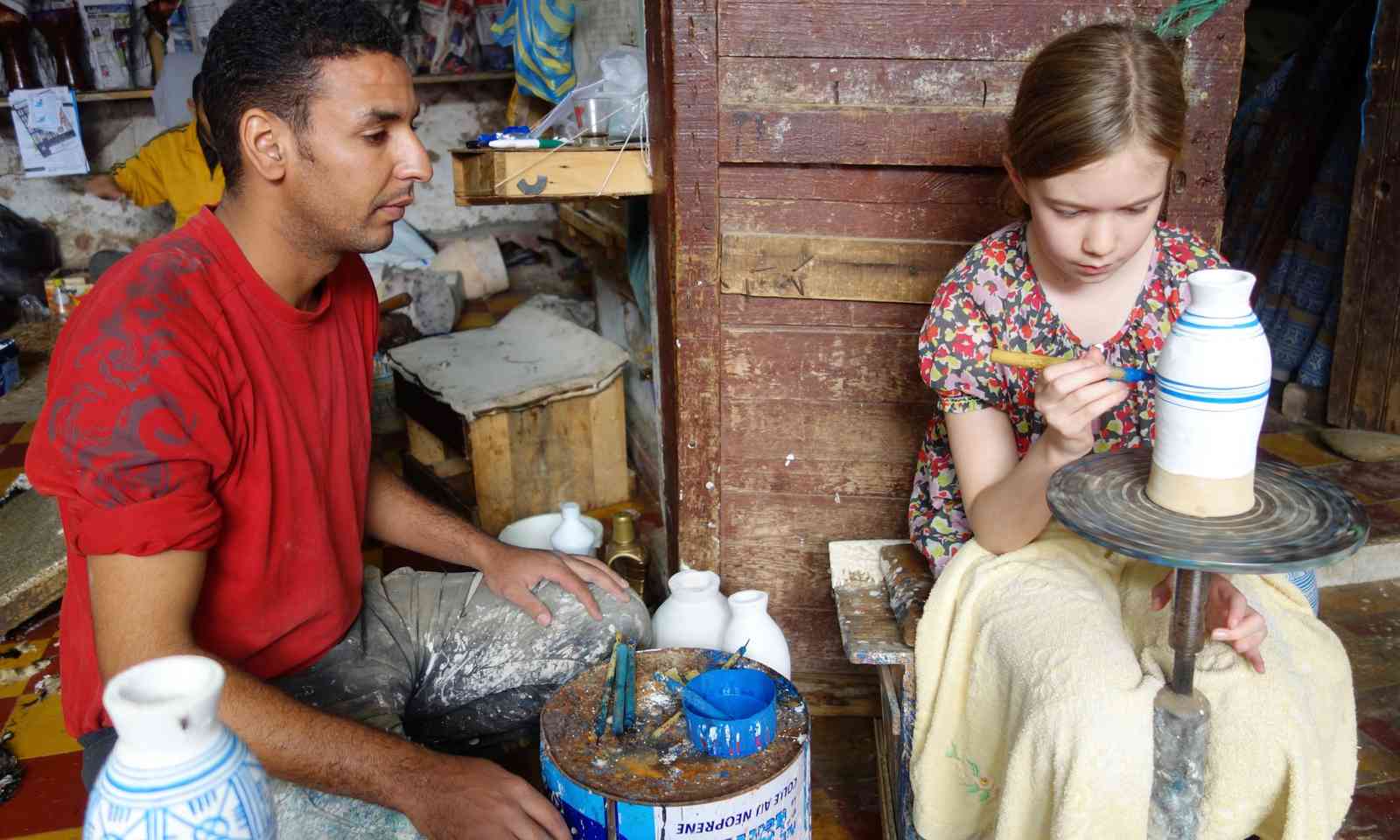 The course was held in a drum workshop, just past the butcher who hung a camel’s head outside his stall to indicated that he sold camel meat. It was set in a former caravanserai, in the old stables, amongst small stalls selling foot cushions and ceramic tiles. Three men were hard at work making drums – in pretty much the same manner they have been for centuries.

Noureddine introduced each of the craftsman and explained what each of them did. Abd-El Hadi painted the ceramic bases, using a potter’s wheel to get perfectly straight lines. Abd-El Kader, the owner, prepared the skins, softening them in water and then scraping away the fur in quick, smooth strokes. Aziz put the skin on drums and trimmed it with huge metal scissors, turning the drums with his feet before binding them together tightly with strips of dried leather.

Soon it was my daughter’s turn. Abd-El Hadi showed her how to use the potter’s wheel and taught her the ancient Berber patterns to hand-paint between the lines. Abd-El Kader let her have a quick attempt at scraping the skins – much harder than it looks she said – before Aziz stretched the skins across the bases and showed her how to attach them using leather string. The drums were then put in the hot Moroccan sun while Noureddine showed my daughter some basic local beats. 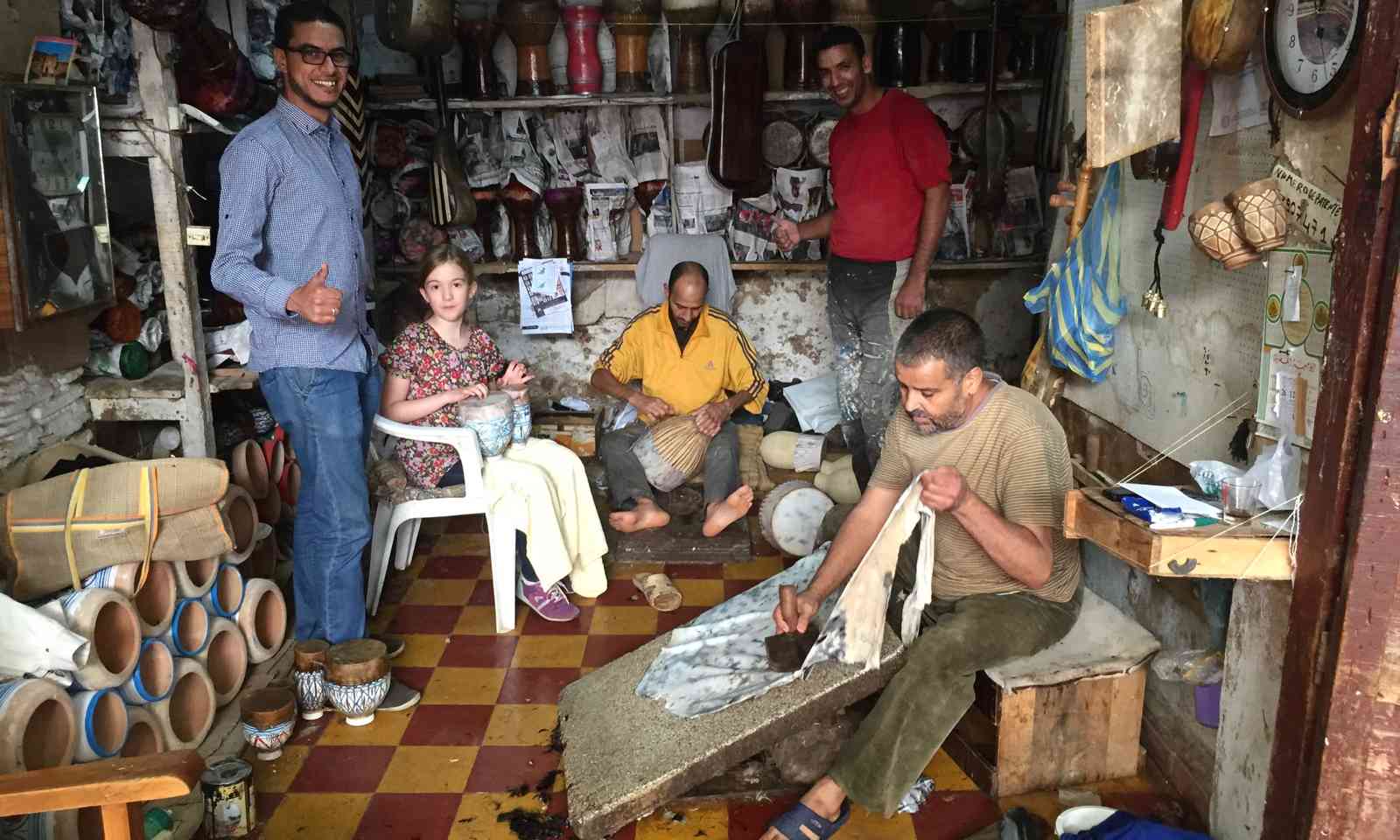 After a taking a quick photo of my daughter, her teachers and her new drum, it was time to leave. Noureddine asked if my daughter wanted to leave the drum to dry and pick them up the next day. She declined fearing something might happen and we couldn’t collect it. She didn’t think her teacher would believe her if she said she’d left her homework in Morocco.

Back in the UK, I printed photos from the morning so my daughter could stick them on a poster. I didn’t want her teacher to think that she had simply gone to Morocco and bought her homework. Without prompting, she wrote captions explaining each part of the process and the story behind them.

She wrote how paint was made from cobalt and secret ingredients and was known as Fez blue. She explained that the four lines that formed the pattern mimicked the tattoos Berber woman have done when they get married. And how some drum skins are made from fish but hers was made from goat. I hadn’t realised just how much had sunk in.

Her teacher was impressed too. Not just by the craftsmanship, but by how much she had learned.

‘Brilliant work, Daisy,’ she wrote. And promptly awarded her a much sought-after gold star.

I’m now waiting to see what her next project is before I start planning our next family adventure...


Plan-it Fez offer a number of short courses in Fez including drum making and Moroccan cooking. For more information, visit their website.