How to visit James Bond Island – and avoid the crowds

“Don’t bother with James Bond Island,” they said. “It’s crawling with tourists, and so busy you’ll hate it.”

Not that I had any choice in the matter. The name ‘James Bond Island’ was enough to conjure up a longing in my partner Jamie that was so fundamental to his happiness that we had to make the pilgrimage. It wasn’t because of the eponymous hero. The baddie, aka Scaramanga, was played by Christopher Lee, a man Jamie has idolised since his childhood.

Khao Phing Kan is the correct name for the island, but not even the Thais calls it that. Situated towards the northern end of Phang Nga Bay, it is almost within touching distance of the mainland. From the cockpit, we could see lush green mangrove swamps lining the water’s edge all the way around. The area is not only spectacular, but of outstanding ecological importance. It’s also shallow here, about as deep into the bay as we could venture in our vessel SY Esper.

We arrived in the late afternoon. From our vantage point, slap bang in the middle of a placid bay, we could see that the island was still fringed with daytripper boats. I had visited about two decades before with a friend of mine. Back then, it was still pretty raw. Longtail boats would pick you up from the shore by your bungalow, anywhere from Ko Lanta to Phuket, then spew you out onto the tiny beach to be met by a barrage of hawkers.

As always, if you want a moment to yourself, the best time to visit these popular places is either very late or very early. When I took Jamie to the Taj Mahal, we arrived pre-dawn and were first in the queue. The doors opened and I marched him straight to the mausoleum, reckoning on catching the views from the entrance and the obligatory “Diana’s bench” shot later.

It meant we had 20 precious minutes alone inside Shah Jahan’s unparalleled homage to love. Under the dome, we leaned against the cool marble and listened to feathers quivering above us in the misty air. James Bond Island was a different kind of tourist attraction, of course, but the principal still held: get there early. 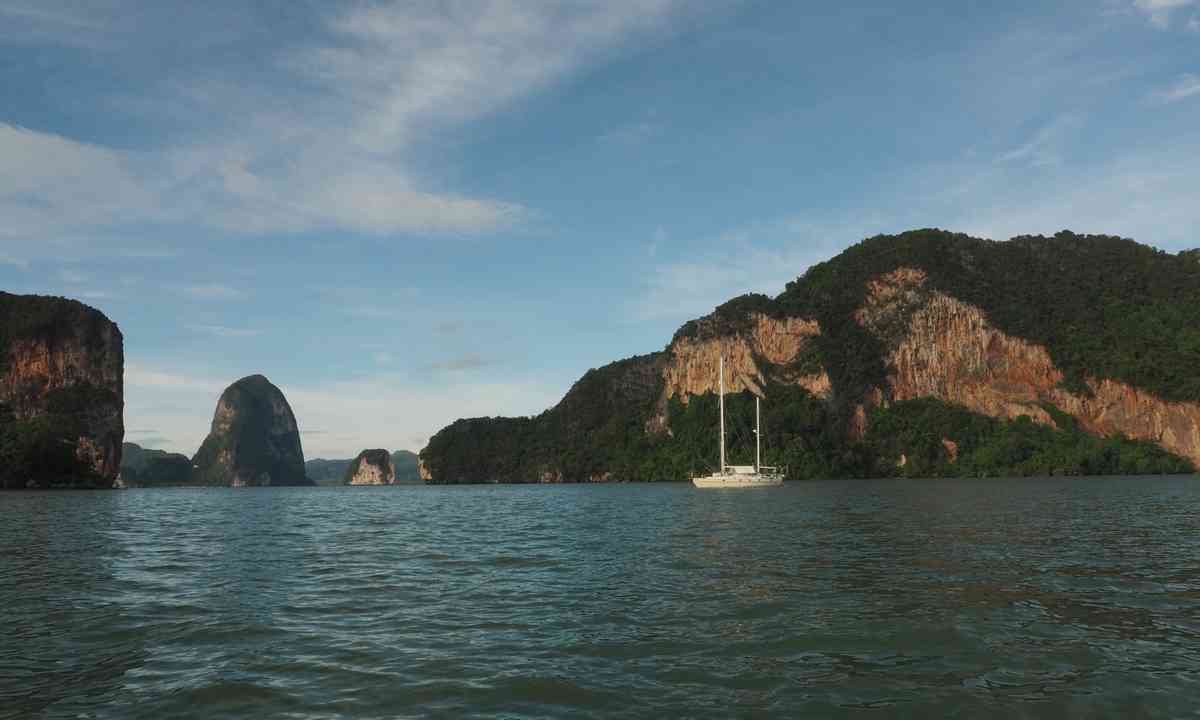 The night before our visit, we spent a chilled evening, winding down and preparing bags of camera and recording equipment for our dawn sortie. More importantly, we watched The Man With The Golden Gun.

There is a scene in the movie where Roger Moore flies a sea-plane into 'China', passing over several green islands on his way to Scaramanga’s hideout. It was like watching our navigation chart come to life. We called out the names of the islands we had just visited as he flew over them and even spotted the place we were anchored at that moment.

“He has a powerful weapon,

He charges a million a shot.

As assassin that’s second to none.

The Man With the Golden Gun...”

With stealth-like cunning and Lulu’s voice still ringing in our ears above the sound of our outboard motor, we were up before the sun. As we sped towards Khao Phing Kan, we just lacked black wetsuits and Walther PPKs to make the Bond-esque picture complete. Ten minutes later, we had our reward for missing out on breakfast and coffee: we dragged our dinghy up an empty beach.

There had been some changes since my last visit. The water around the island is now cordoned off with rope and floats. There are paved pathways through the rocks. An information centre and a coffee stop now await the thirsty traveller and there is signage everywhere. But there were no other visitors.

A few sleepy men who looked as though they worked for the tourist office swept around the pathways and permanent gift carts. We swapped sawadhee kraps and sawadhee khas (male and female versions of 'hello' in Thai). The ticket counter was closed and no one was in a hurry to charge us for turning up.

On one side of the isthmus that runs between the islands’ two peaks stands the film’s iconic limestone karst. It is much smaller in real life than you would expect, but its gravity-defying mushroom shape is none the less impressive. A small harbour on the opposite side has been built to allow passengers on and off, and there are some interesting rock slides and formations. And that is about it.

A lot of fuss about nothing, you might think, but my Jamie’s smile split his face from ear to ear.