On top of the world – but feeling under the weather? How to overcome altitude sickness

Altitude sickness can affect the most seasoned of travellers but, as our resident travel doctor reveals, a few simple tweaks can have you back in high spirits

"I recently flew into Salta via Buenos Aires as part of a visit to north-west Argentina. I was there to join a trip early the next morning, but even though we had been warned about the risk of altitude sickness, I wasn’t concerned as I had travelled and trekked at high altitudes several times before.

"We headed in a 4WD vehicle up to the High Puna plateau. Our first stop was an archaeological site at 3,100m, which had great views. We walked around the hillside, but as I rounded a bend I was hit by a strong gust of wind, whereupon I felt nauseous and dizzy and had to sit down. I turned back and made my way slowly to our vehicle.

"We carried on heading north and crossed a pass at 4,560m. We then arrived at the town that was to be our base (3,520m). I had a throbbing headache and felt both nauseous and uncomfortable. As soon as I was shown my room, I crawled into bed fully clothed. Over the next 16 hours or so, I had several nosebleeds and attacks of diarrhoea. I made sure to drink lots of water, and one of the group brought me rice, of which I managed to eat a small amount.

"In the morning I felt dizzy, very weak and tired. I skipped the early activities and instead took things very slowly. But in the afternoon I was well enough to at least do an excursion by 4WD, and I did manage a little bit of food that night before collapsing into bed again. By the next day I was almost myself."

Lyn’s experience illustrates some of the challenges of ascending to a high altitude. A minority of individuals do seem especially susceptible to the effects of thin air, but even those who have experienced them before without problems may not be spared. People who ascend with a cold, for example, might expect more problems than those who begin their journey in perfect health.

Lyn’s challenge was in acclimatising, and this can be difficult to do in the Andes. People using aircraft or vehicles to ascend quickly are most likely to suffer mountain sickness (aka altitude sickness), and once out on the Altiplano there is little opportunity to descend even a few hundred metres to mitigate the effects of thin air. And it’s not just in Argentina: people flying into Denver, USA, can be badly affected, while better road and air access into the Himalayan region means people can now get into thin-air trouble faster there.

Most people will experience symptoms of mild mountain sickness at 3,000m. Standard advice is to aim to spend a few days reaching that altitude, then, having acclimatised, ideally go up no more than 300m a day thereafter. Lyn’s ascent was therefore much faster than is recommended.

Having experienced symptoms at 3,100m, she would have been well advised to have loitered at that height before gaining any further altitude. That said, it is usually possible to ‘get away with’ a quick ascent as long as you sleep relatively low. Had Lyn slept on, or near, the pass at over 4,500m, she would likely have become very ill indeed. Her life might even have been at risk.

Top tip: Avoid drinking alcohol while acclimatising to high altitude; it adds to the symptoms of mountain sickness and makes dehydration worse. 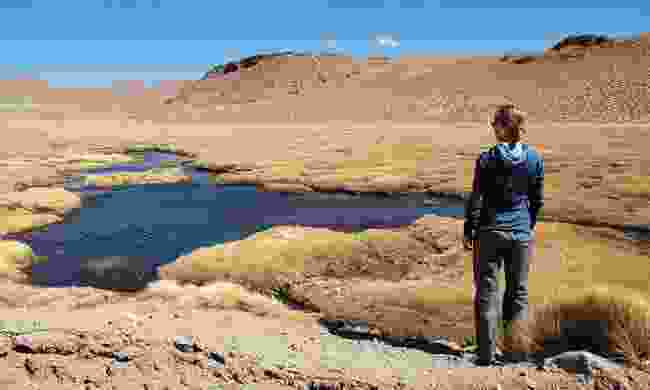 Looking out at the vast plains of High Puna, Argentina (Lyn Hughes)

The symptoms experienced early in altitude sickness include undue breathlessness, lack of appetite and often nausea. There are also sometimes headaches. If the illness develops further, it will probably become apparent whether the victim’s lungs or brain are worst affected.

If fluid is accumulating in the lungs, people will start to cough and some will produce frothy, even blood-stained, sputum. If the main problem is with pressure within the skull because fluid is building up, then a headache is the main symptom, but there may be disorientation and bizarre behaviour, too.

In this case, the victim is unlikely to understand that they are ill and in urgent need of evacuation. Getting such an uncooperative person to lower altitude can be challenging, yet a descent of as little as 500m will probably save their life. Such danger signs can come out of the blue or may be a continuum of increasingly severe symptoms; usually they begin in the first three days.

Symptoms are likely to be at their worst in the middle of the night – when evacuation is most difficult. Yet this is the time when someone is most likely to die of the illness. Its unpredictability as well as its rapidity of onset is what makes altitude illness so dangerous.

Fluid is lost faster at altitude and on exercising. Dehydration is common in the mountains, so Lyn was quite correct in ensuring that she was well hydrated. Indeed, mountain sickness can mimic dehydration, exhaustion or even a chest infection, and all of these problems may be present in addition to mountain sickness.

This is exactly the scenario where the medicine Diamox (aka acetazolamide) would have been worth having to hand. Mountain sickness is caused by an imbalance in the body’s acid-alkali system, which in turn controls the rate of breathing. Diamox tweaks blood acidity and subtly increases breathing rates (including while you sleep), and so one dose of Diamox would have settled Lyn’s symptoms in about two hours.

The dose is 750mg for a smaller person or 1,000mg for people over about 70kg in weight. Diamox can also be taken preventatively as a course of five 250mg tablets. One is taken each morning, starting around two days before the ascent begins.

Diamox is a prescription-only medicine in the UK, available on private prescription from a GP – though some are reluctant to provide such a prescription. It may not be taken by those allergic to sulpha drugs. It is also often available cheaply and without prescription at pharmacies in mountainous regions overseas.

Dr Janes Wilson-Howarth lives in the Kathmandu Valley; she has written four books set in Nepal and is working on a fifth. Visit www.wilson-howarth.com to find out more.