How to tell your islands from your islets

Tourist or traveller? Which are you? Arguments and discussions around this question flare up from time to time. Self-proclaimed travellers tend to present themselves as superior, explaining that because they are often away from home for longer and stay for months in an out-of-the-way foreign place, they are elevated above the label of lowly tourist. Tourists think travellers are a bit up themselves, or don’t think about them at all.

A similar debate is sometimes had in the sailing world when the usual stereotypes are used to underline a point. “Liveaboards” don’t move, “blue-water cruisers” sail round the world, never staying anywhere for long, “grotty-yachties” do everything on the cheap, superyacht crews don’t experience real life.

Each person in the debate has their own personal and cultural definition of these terms. I have learned to stay quiet on the subject. But, truthfully, Jamie and I morph between being tourists, travellers, expats, visitors, sailors, liveaboards, cruisers and sometimes grotty-yachties. Once, we were even superyacht crew. 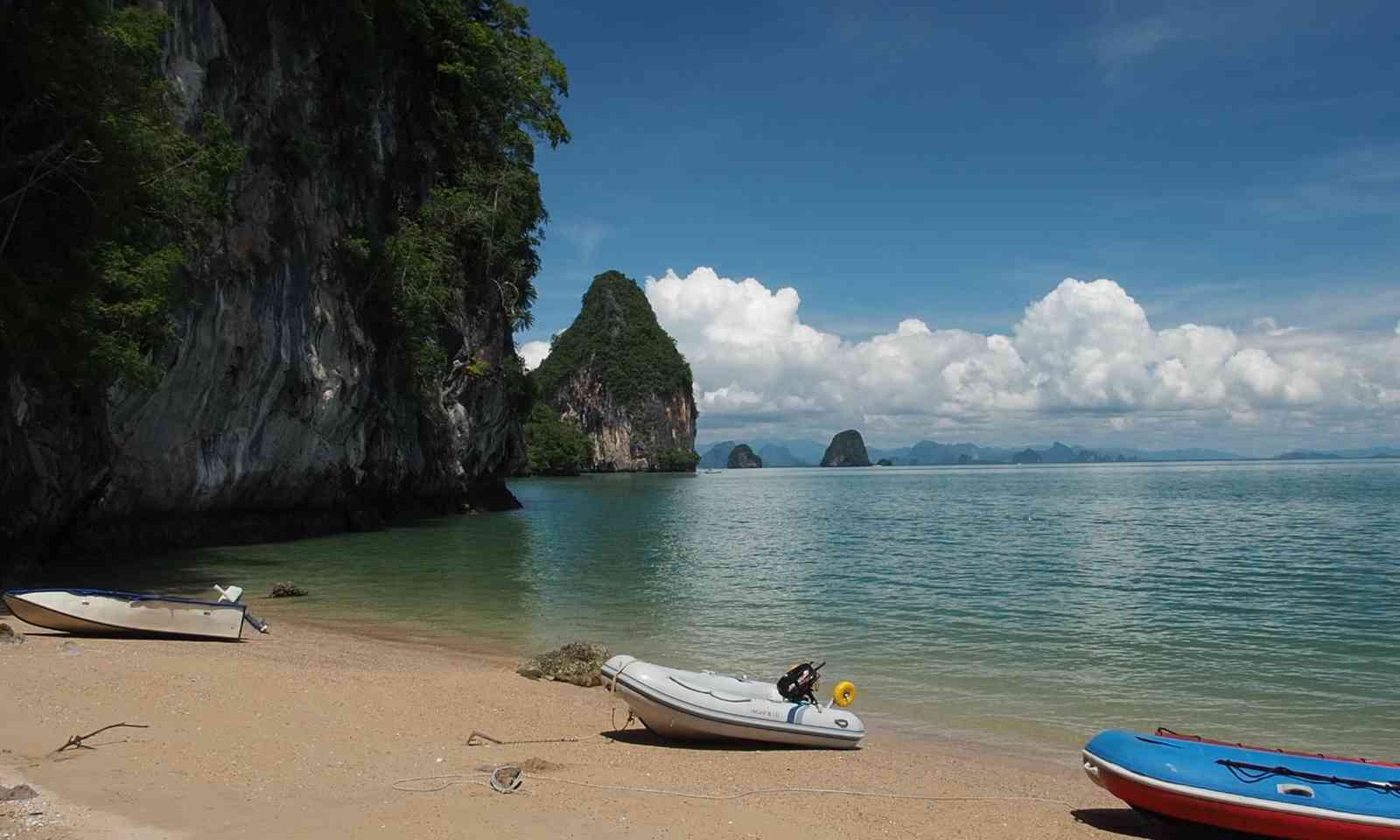 In Phang Nga bay, we were tourists, off to see the sights. We had already anchored next to Ko Phanak, one of the three island stops on the daily tourist boat route, and we intended to visit the other two before heading south: Ko Hong and Ko Phing Kan. This is because we have learned that the big tourist destinations are usually popular for a reason.

The advantage you have on your own boat in this kind of situation is timing. What others do in eight hours can be stretched over days or weeks, and if a diversion comes along you’re free to take it.

We left Ko Phanak, and headed to the daddy of all the hongs, the eponymous Ko Hong. Like many of the islands in Thailand, it is actually a group of islands, islets and rocks. We’ve never got to the bottom of what makes an island an island,an islet or a rock, and Googling doesn’t help. So for the purposes of sailing in this area, here are our own geopolitical definitions:

Island – can be big or small, but always has human habitation (Australia is an island in our definition, as is Sark)

Islet – always smaller than an island, always uninhabited but with vegetation and animals

Rock – the smallest of the three, with no people, animals or vegetation 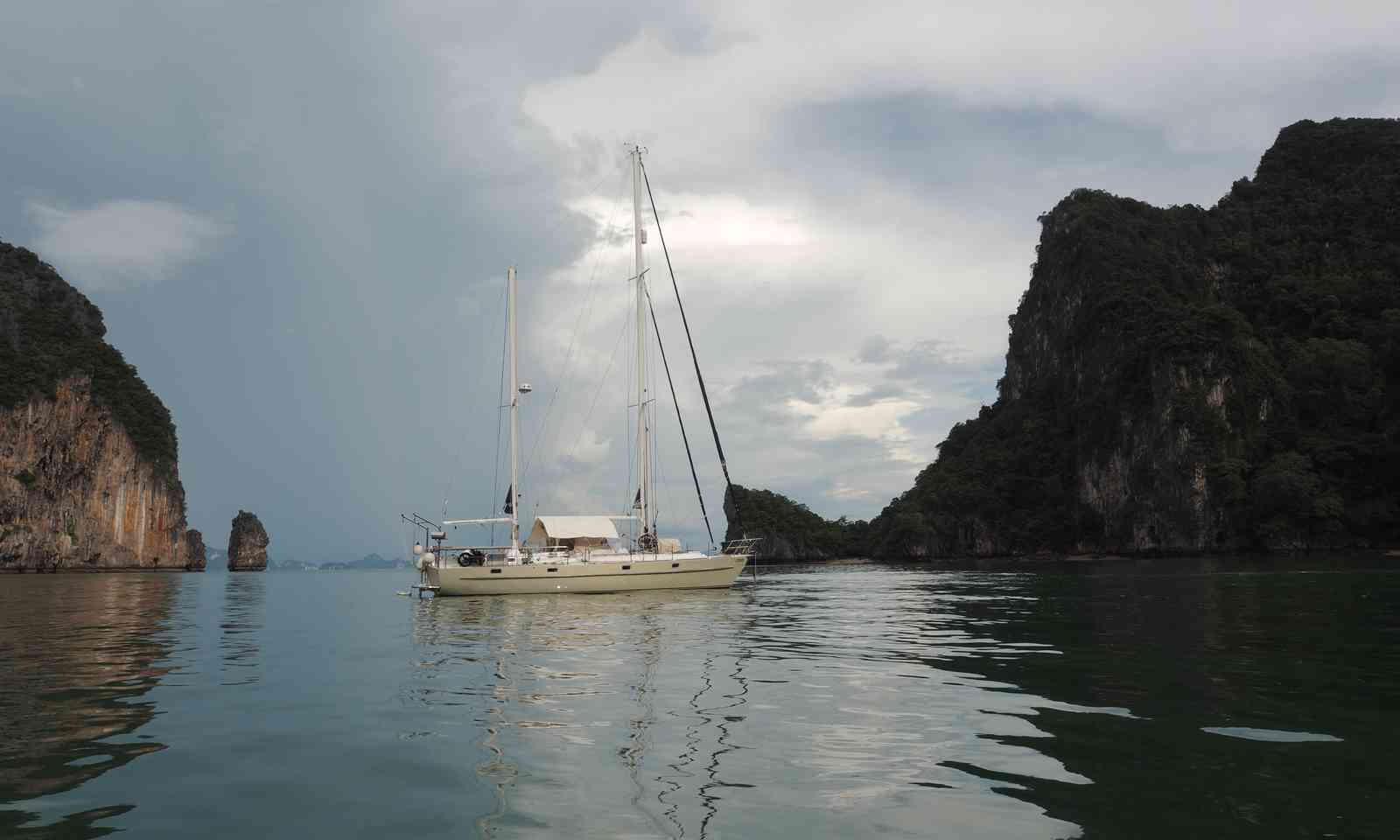 For the first couple of nights, we anchored next to Ko Yai (roughly translated as large); there is also a Ko Noi (roughly means small) in this group. Most of the island groups in the sailing ground bordered by Phang Nga, Phuket, Ko Lanta and the Butangs contain a Yai and a Noi. Thais don’t feel the need to give all their islands individual names. We got on with boat maintenance and domestic jobs while we waited for the late transitional season rains to finish.

Eventually, the storms calmed down and we lifted the hook to motor north to the protected anchorage outside Ko Hong’s entrance. Unlike Phanak, Ko Hong is much more open and you don’t need to paddle through a cave to reach your destination.

A collapsed centre has opened up one half of the island, which means it’s completely accessible from a number of sides depending on the state of the tide. The same rules apply here, so there are no outboard motors or shrieking humans inside the peaceful lagoon. Instead, there are hundreds of inflatable kayaks and humans with noisy cameras.

The hong is beautiful and green, with every kind of limestone karst manifestation in evidence: tunnels, funnels, channels, caves, stalagmites and tites, overhangs, run-offs, sink-holes, basins. The other tourists “ooohed” and “ahhhed” as they passed by in their guided canoes. But its leafy abundance didn’t seem so impressive as the secret hong on Ko Phanak. Perhaps this was because we didn’t have to paddle through a black, bat-filled cave to find it.

Or perhaps we were experiencing the ennui of the world-weary traveller? We wondered if that question would be cleared up at our next destination: Ko Phing Kan, aka James Bond Island.