How to tackle the Ho Chi Minh Trail by motorcycle

In the spring of 2013 I saddled up and set off from Hanoi on a rip-roaring motorcycle ride down the remnants of the legendary Ho Chi Minh Trail. Riding alone on an aging, pink Honda Cub known as the Pink Panther I spent the next two months following what remained of the web of roads, tracks and footpaths that had once been the fulcrum of the Vietnam War; the means by which Ho’s communist north had funnelled men and machines to fight – and beat – the American-backed south. Formerly a 12,000 mile labyrinth that spread through Vietnam, Laos and Cambodia, today the Trail is fast being swallowed by time, nature and development: I wanted to explore it before it was too late.

A trip down the Trail, whether it be just in Vietnam, or in all three countries, is a fantastic way to get off the Birkenstock-beaten tourist track, see parts of Indochina that few foreigners reach and gain an insight into the region’s cataclysmic 20th century history.

Here are my top tips for those tempted to ride the Trail themselves. 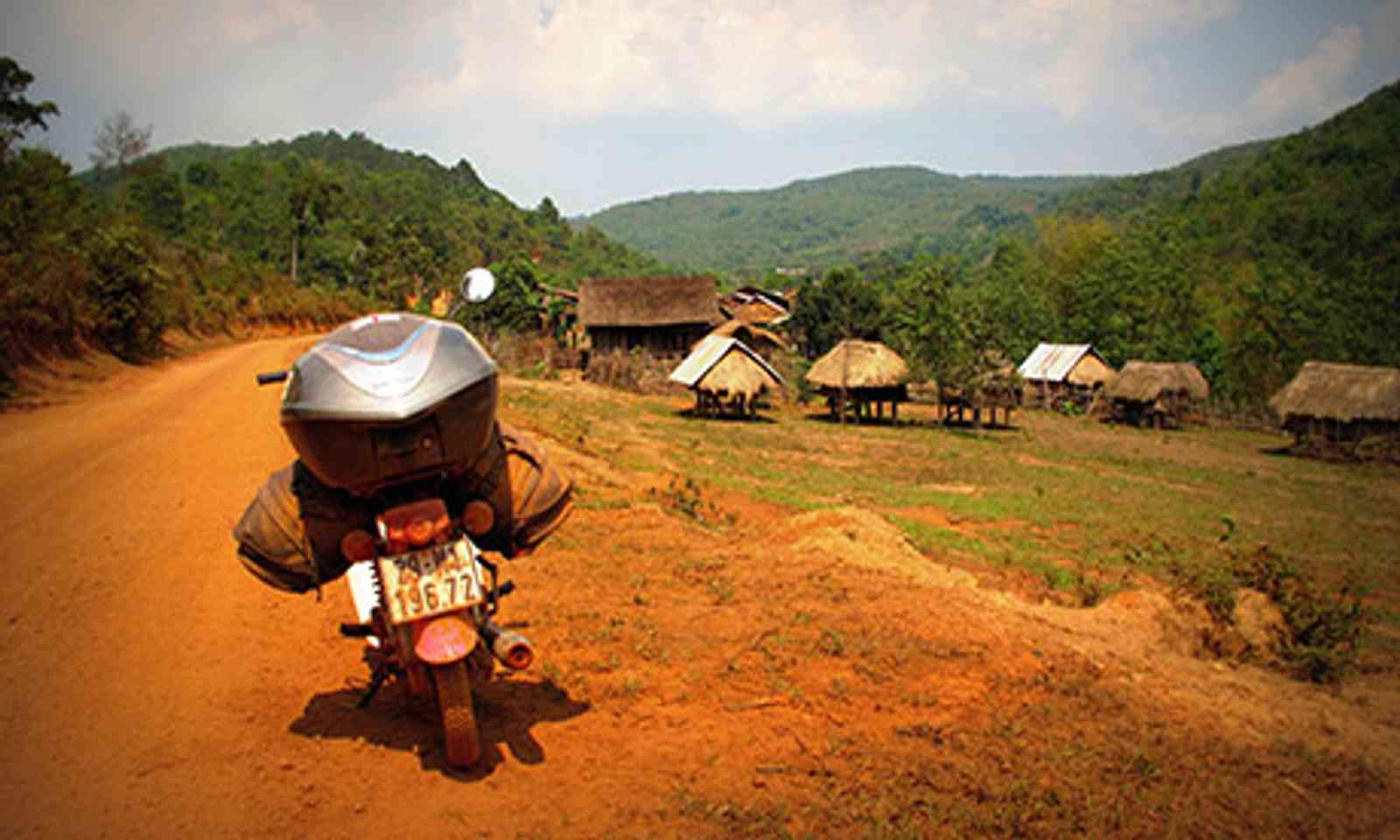 The Ho Chi Minh Trail wasn’t a single entity: rather it was an ever-mutating skein of roads, tracks, footpaths, bicycle tracks, elephant paths and waterways spreading from Hanoi to Saigon, through the eastern flanks of Laos and Cambodia. Built between 1959 and 1975, at its peak it measured a staggering 12,000 miles, but today much of the Trail has vanished under tarmac, mines and development, or simply been reclaimed by the dense jungle it was hewn through. Yet for those who wish to find it, much of the Trail does remain – some of it as tarmac highways, some as rutted jungle tracks still littered with UXO, rusted tanks and gaping bomb craters.

In the last 15 years a brand new highway, The Ho Chi Minh Highway, has been built over old Trail routes between Hanoi and Saigon. If you want the easy option and are a novice biker then this is the option for you, since you can ride the 1,000 miles without ever leaving tarmac or Vietnam.

If you want a tougher, more authentic Trail experience then follow one of the old Trail routes over the Annamite mountains into Laos.  For the Full Monty, add Cambodia to your trip. Don’t even think about exploring the Trail in Laos without using Laos GPS Map. For Cambodia and Vietnam, you can get away with using a regular map or a local data SIM in your smartphone. 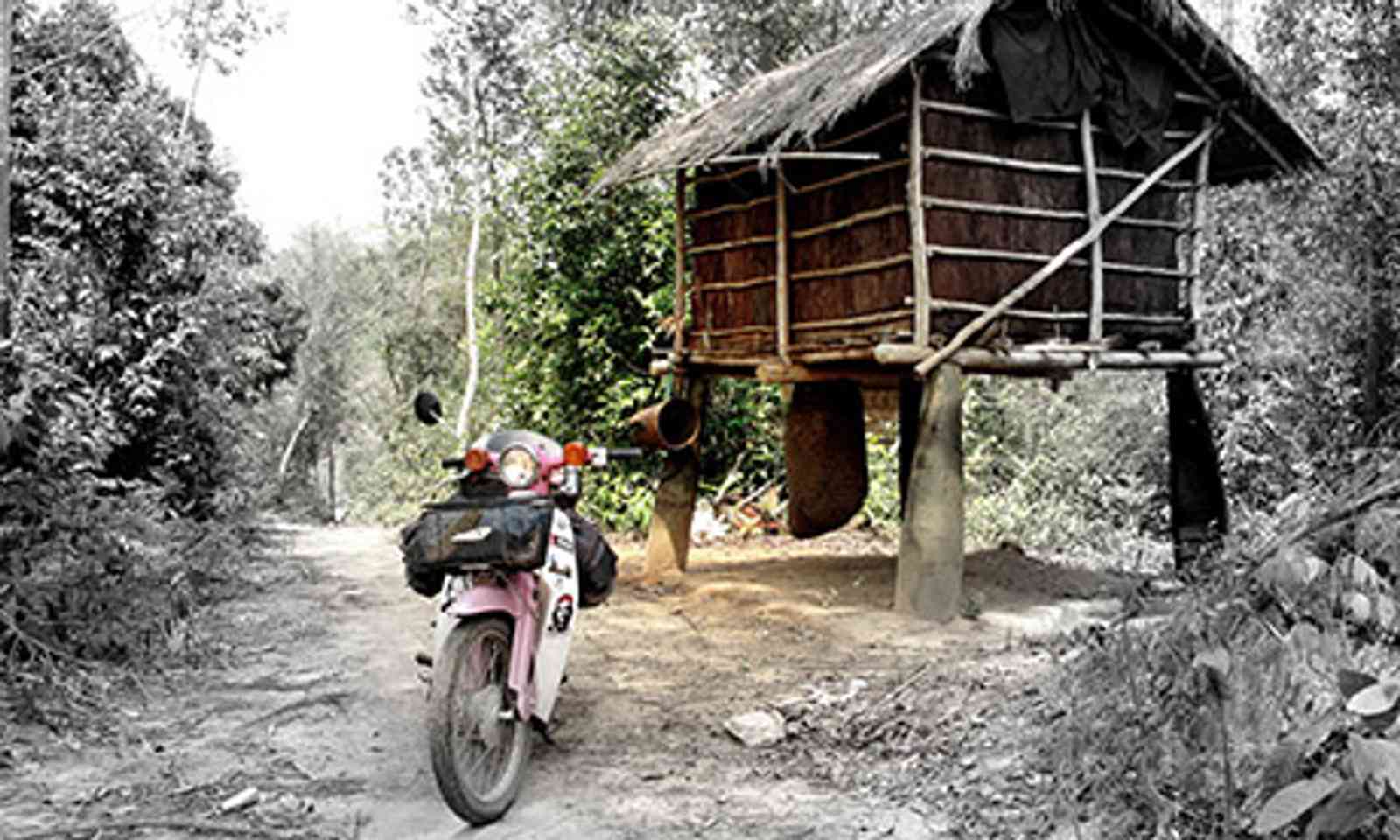 Riding the Trail has become big business in Vietnam and there are numerous tour companies and bike hire outfits who can provide both bikes and guides. If you want to go as part of a group look no further than the excellent Hanoi-based Explore Indochina. If you want to just hire a bike and go it alone, contact the lovely Cuong at Cuong’s Motorbike Adventure in Hanoi. In Laos, Jim at Remote Asia in Vientiane does both bike hire and guided rides.

The choice of whether to take a guide, go in a group or go alone is a very personal one. It depends on your level of bike experience and what sort of holiday or adventure you want. 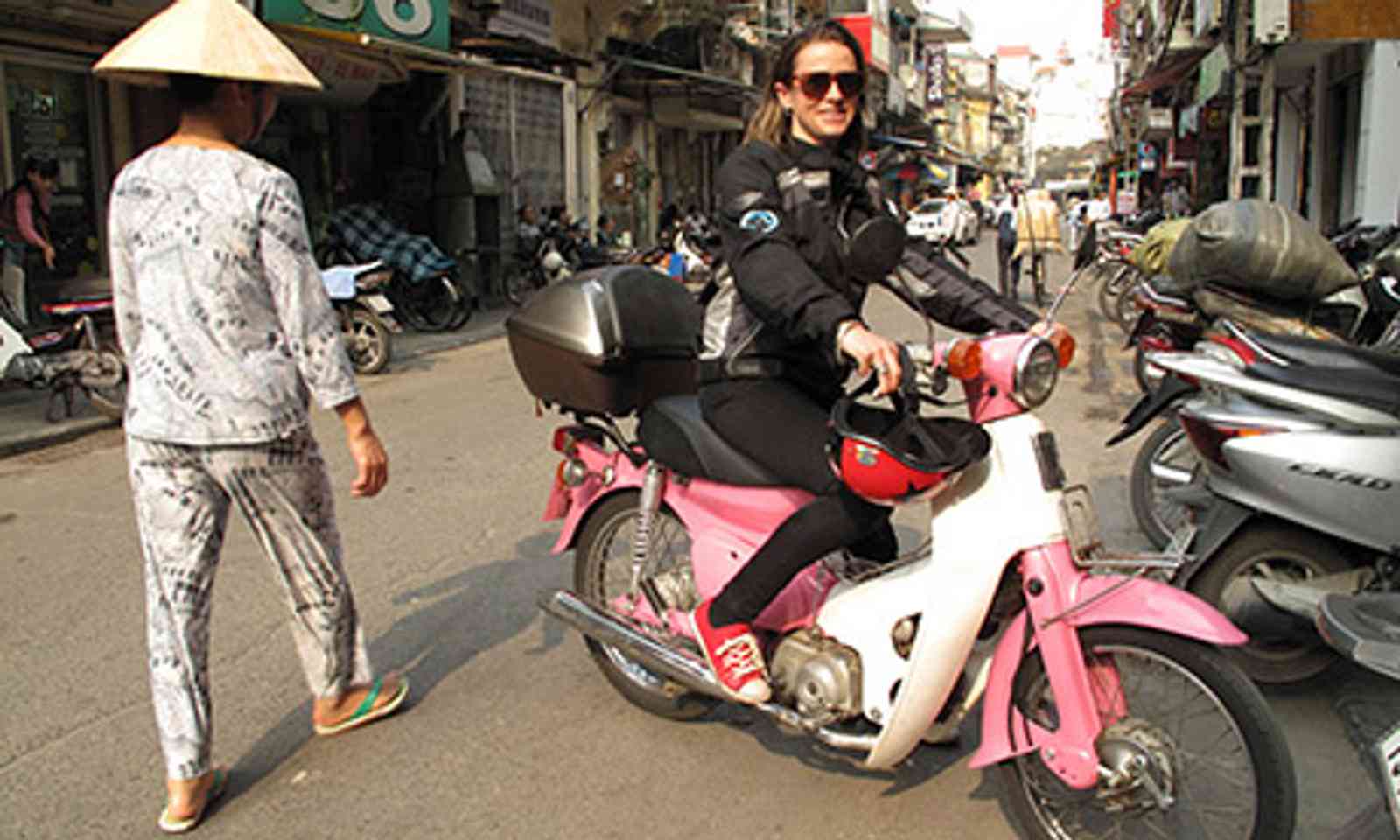 Is this the first time you’ve wrapped your thighs around a throbbing 125-cc engine or could you ride the Paris-Dakar Rally blindfold? If you’re a complete novice it’s probably not the best idea to hire a 400-cc Honda dirt bike and go it alone dressed in shorts and a string vest. Likewise, if you’ve got a garage full of KTMs at home you’re not going to be content dawdling along on a Honda Cub. Work out your vague route, see how much tarmac or dirt is involved and then talk to your bike provider to see which motorcycle best suits your needs.

Since I’m useless at mechanics and was travelling alone through extremely remote regions I wanted a steed that was idiot-proof, indestructible and easy to fix, hence the Honda Cub suited me perfectly. As it turned out, 25-year old Cubs aren't quite so indestructible when faced with the mud and mountains of south-eastern Laos. 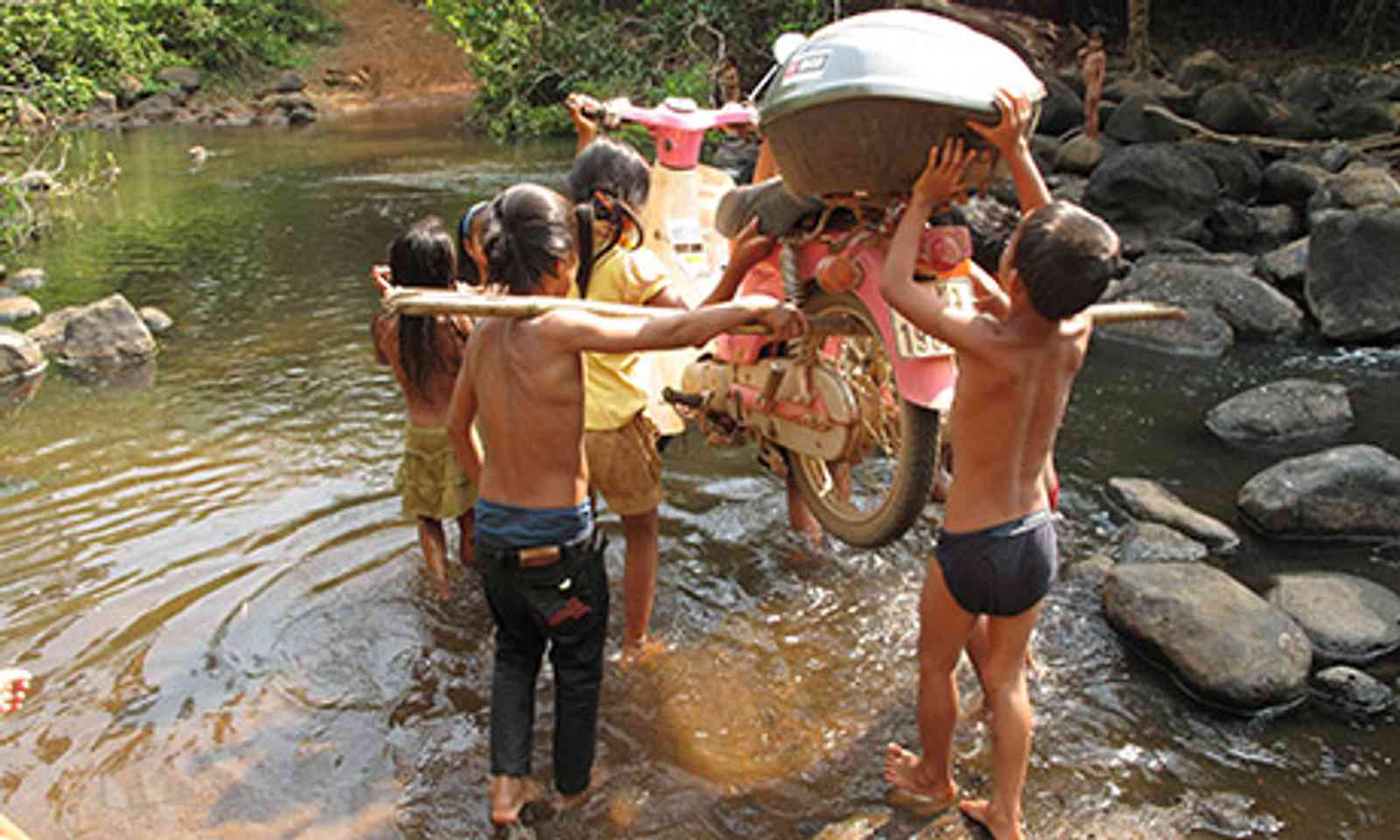 4. Don’t go in the rainy season

During the Vietnam War, Dong Sy Nguyen, the North Vietnamese commander of the Trail, wrote: ‘We have two opponents. One, the enemy: two, the harsh weather conditions.’ Between April and October the monsoon created havoc, destroying bridges and burying miles of roads under landslides.

The same applies today so if you can avoid it, make sure you go in the more clement months of October to April. 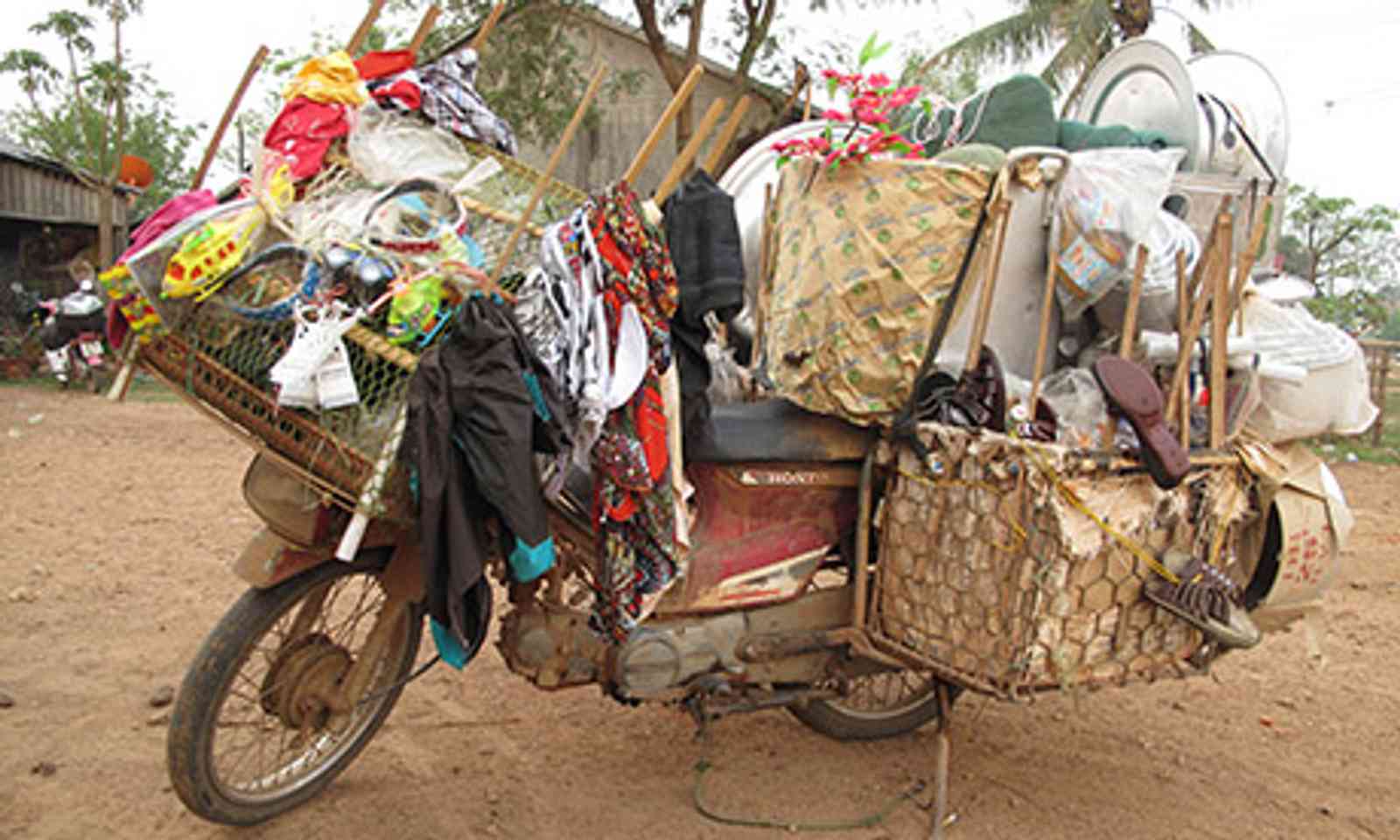 5. Think about your kit

There’s not a lot of room on a motorcycle so plan what you’re going to stuff into those panniers carefully. Are you going to navigate with maps, the stars, a smartphone and local data SIM cards, an Android tablet loaded with Oryx maps or a small handheld GPS? What about things like a medical kit, simple tool kit and spare parts for the bike? What motorcycle gear are you going to wear and where are you going to buy/hire it from? What sort of panniers will you use and will you hire or buy them?

As I was travelling alone on a very small bike my choice of kit was vital and I thought hard about every single item I took, down to dry bags, solar chargers, a spare throttle cable and emergency food supplies. 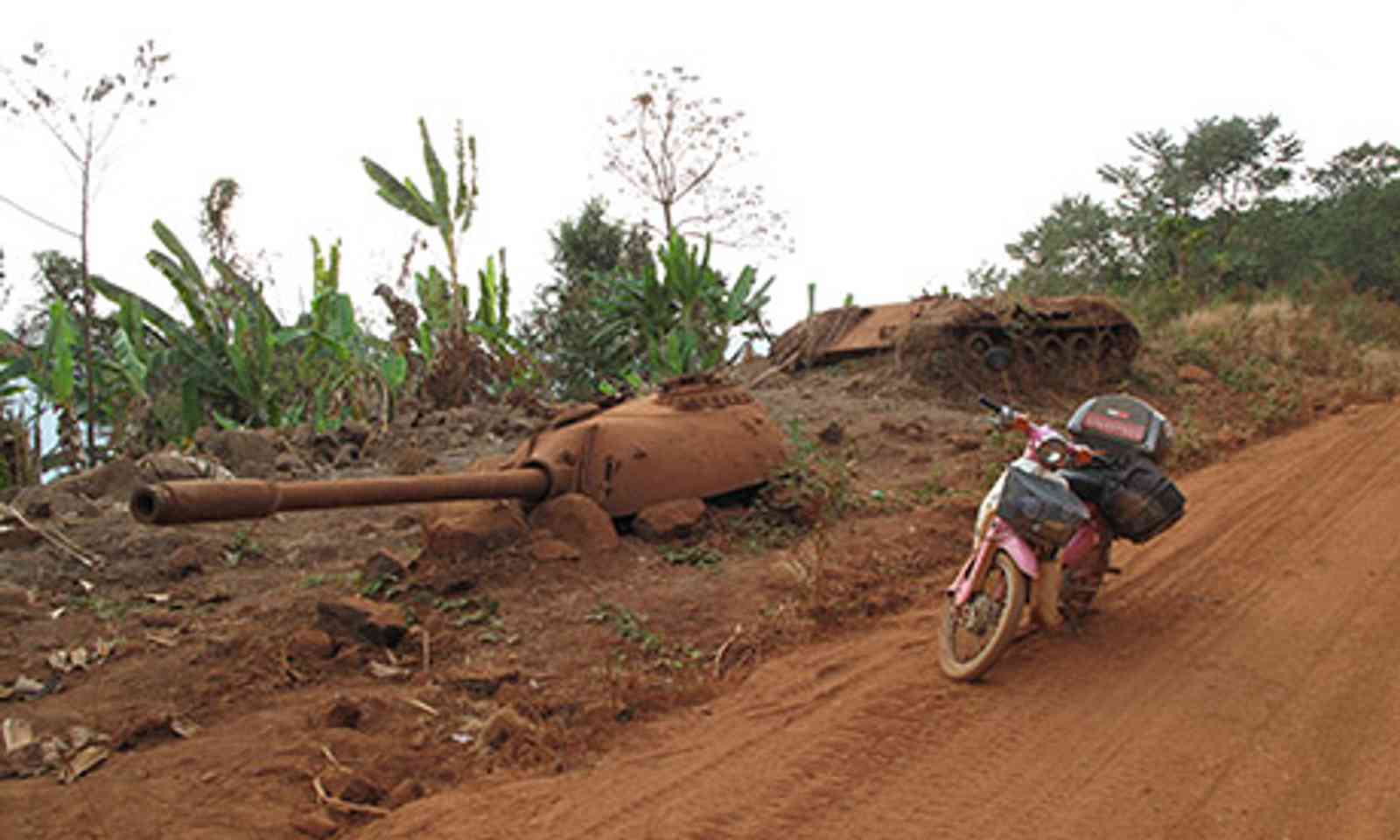 An estimated 15 million tonnes of bombs were dropped on Vietnam alone during the war. A further two million were unleashed on Laos, and at least three million more on Cambodia. Hundreds of thousands of tonnes of these explosives remain, killing hundreds of local people every year.

Be careful of wandering off the track, particularly in the remoter regions of Laos: you never know where a tennis-ball sized cluster bomb could be lurking in the undergrowth. I had a very near miss myself.


To find out more about this problem see the Mines Advisory Group’s website, or visit one of their centres in Laos or Vietnam.

Ants’ book about her adventure, A Short Ride in the Jungle: The Ho Chi Minh Trail by Motorcycle, is out now and available online and in all good bookshops. To find out more about Ants see www.theitinerant.co.uk or follow her at @AntsBK.