How to complete the Three Peaks Challenge in 24 hours

An expert reveals how to climb Ben Nevis, Scafell Pike and Snowdon in under 24 hours, with advice on what to expect and how to take on the challenge.

The highest mountains in Scotland, England and Wales are the stages for thousands of people each year who attempt the Three Peaks Challenge. The challenge is to climb all three mountains, one after the other, and drive between them, in under 24 hours. This is how many people first see Britain's great mountain ranges, and is to hillwalking what the London Marathon is to running, a signature event that for many leads on to a lifetime of enjoyment. 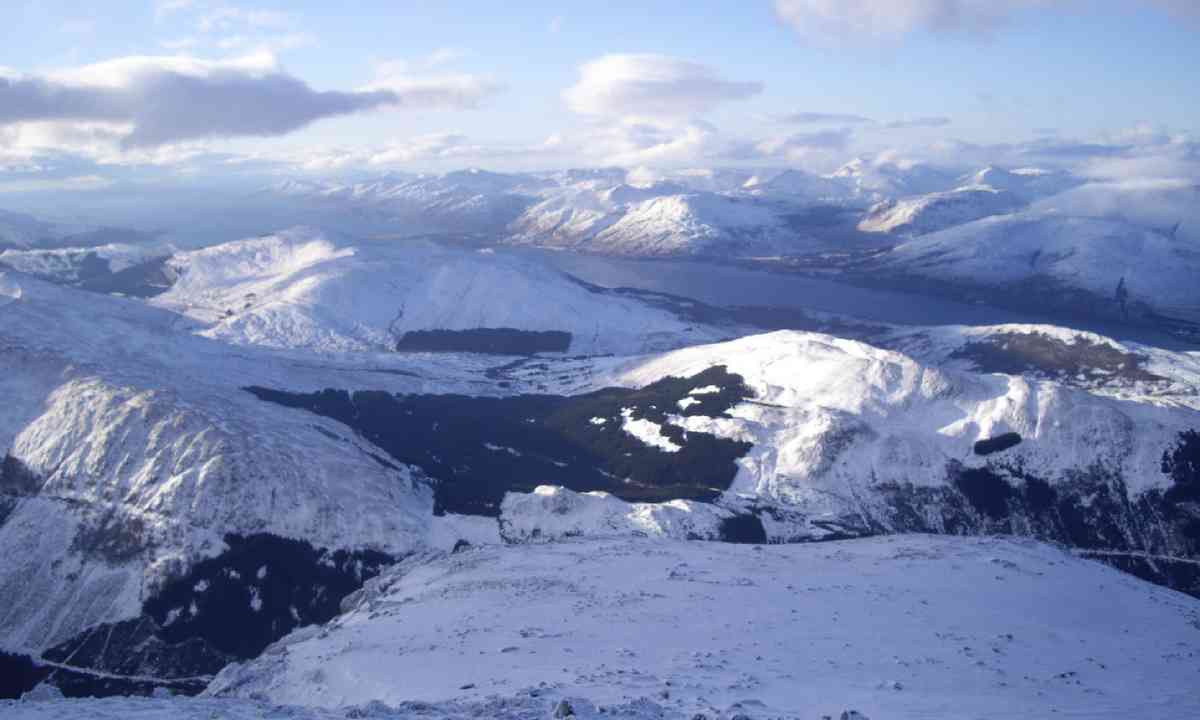 As a leader, my job is to take groups through the challenge, guiding them up the mountains, telling them about the landscape, and generally being a source of optimism or hard truth. My group this weekend are from Sainsbury's, and are raising money for MNDA. Yesterday we met up in Chester for the drive north in the minibus, enjoying the spectacular views through Scotland while being soberly briefed on what was to come. I asked what training they had done and there were nervous glances all around.

Ben Nevis is a big hill. From the base to the top takes up nearly half the ascent of the entire challenge, and though the weather is calm, we are in a thick mist from half way up. The path is easy to follow, and only near the top does it peter out into a boulder field, which even in late June is covered in several feet of snow. A few weeks before I had been here in a blizzard and we had to retreat.

At the top we briefly celebrate with photos of snow and mist and set off down. I like groups that look after each other, and the energetic ones are already supporting those who are flagging. The first half an hour of any challenge is the toughest as you adjust to it, but by the time the summit cairn of Ben Nevis is reached, my group are elated. 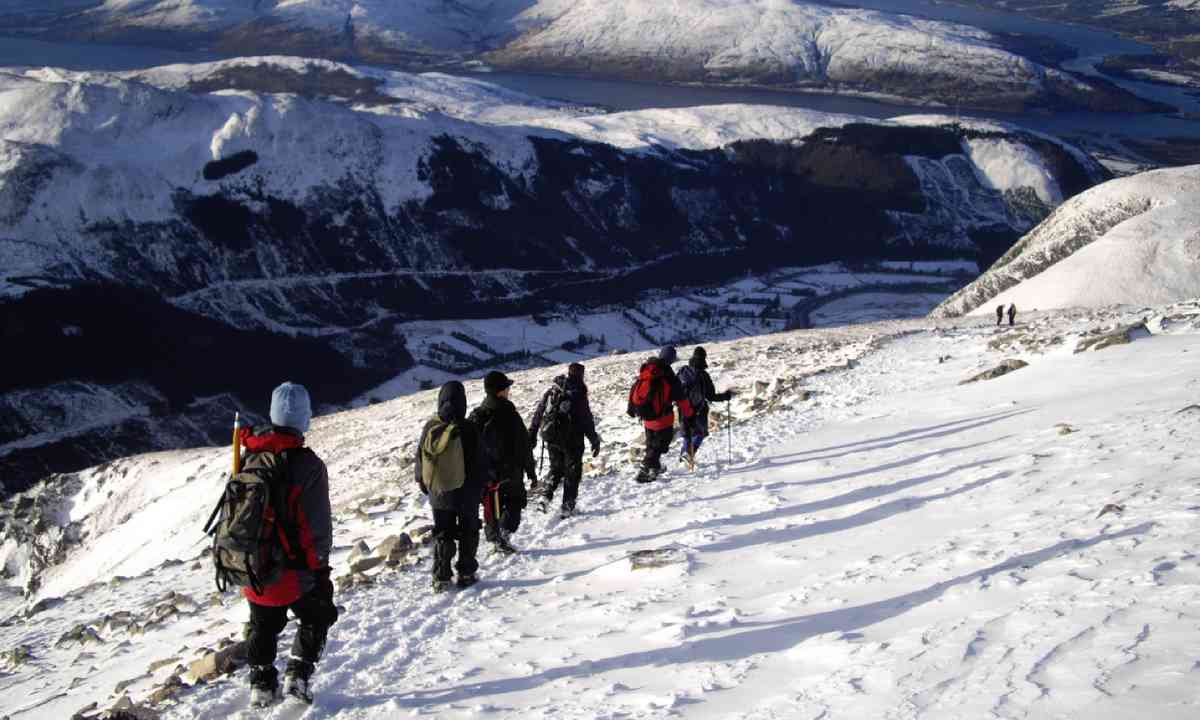 The majesty of Ben Nevis is unparalleled. In all directions from the top, when you can see, are lines of mountains to the horizon, and to the west the Atlantic and the Hebrides. People know it as the Ben; the hill. It is not a mountain which you conquer, it is one to which you submit, and hope it lets you reach the top.

After spending several hours driving to the Lake District, it is to the volcanic hump of England's highest peak, Scafell Pike, to which we turn our attention. The main route up for the challenge starts and ends in Wasdale, a valley that swallows you whole. At its heart is England's deepest lake, Wastwater, and the head of the valley is dominated by the mountains of Pillar, Kirk Fell, Great Gable, and of course the Scafells, not one peak but a whole range of peaks, jutting out of a 900 metre high plateau of shattered rock. 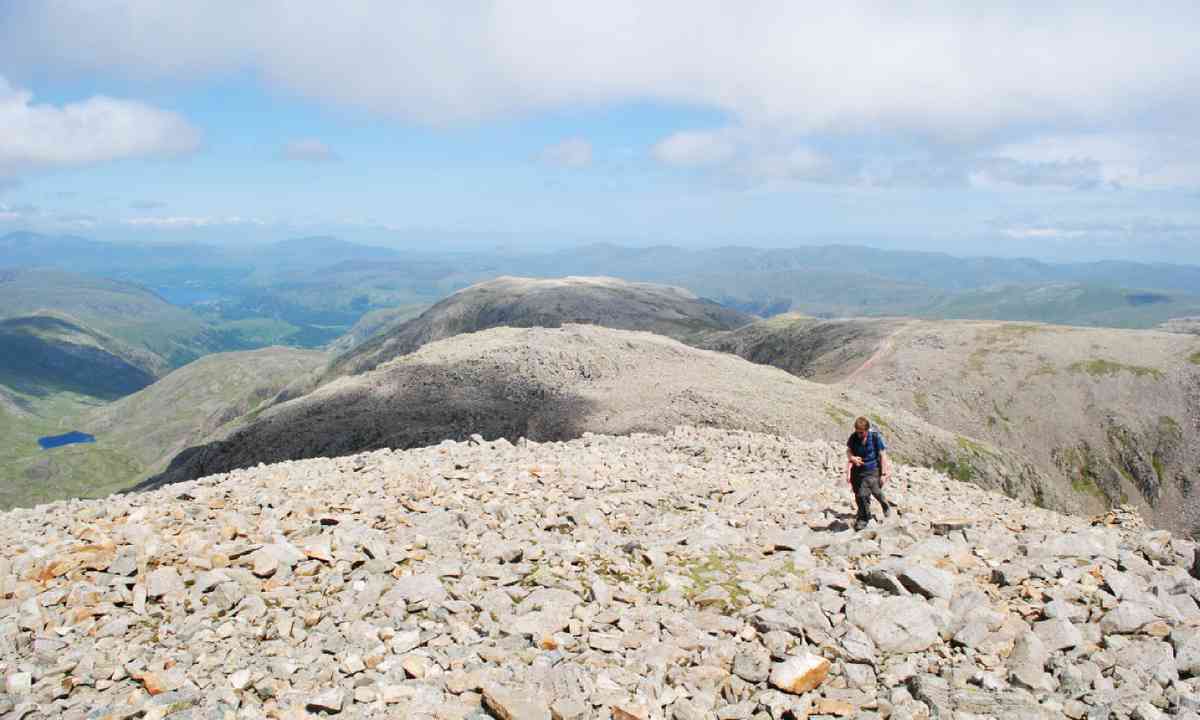 The route up Scafell Pike is steep and relentless. You gain height quickly, and will soon be able to look back over Wastwater to the sea, and on a clear day, the Isle of Man. My team from Sainsbury's got some much needed sleep in the minibus, but two had to turn back shortly after starting. It is the go-stop-go nature of the challenge that is too much for some, and for all it's a psychological battle.

If you climb Ben Nevis in the morning you should reach Scafell Pike by evening, and I have had several groups who have witnessed a clear sunset from the summit before the descent. One lady once turned to me on the top and said, unprompted, “It's so beautiful I could cry”. She hadn't been the most talkative person on the trip, but from that point I knew she'd be okay. 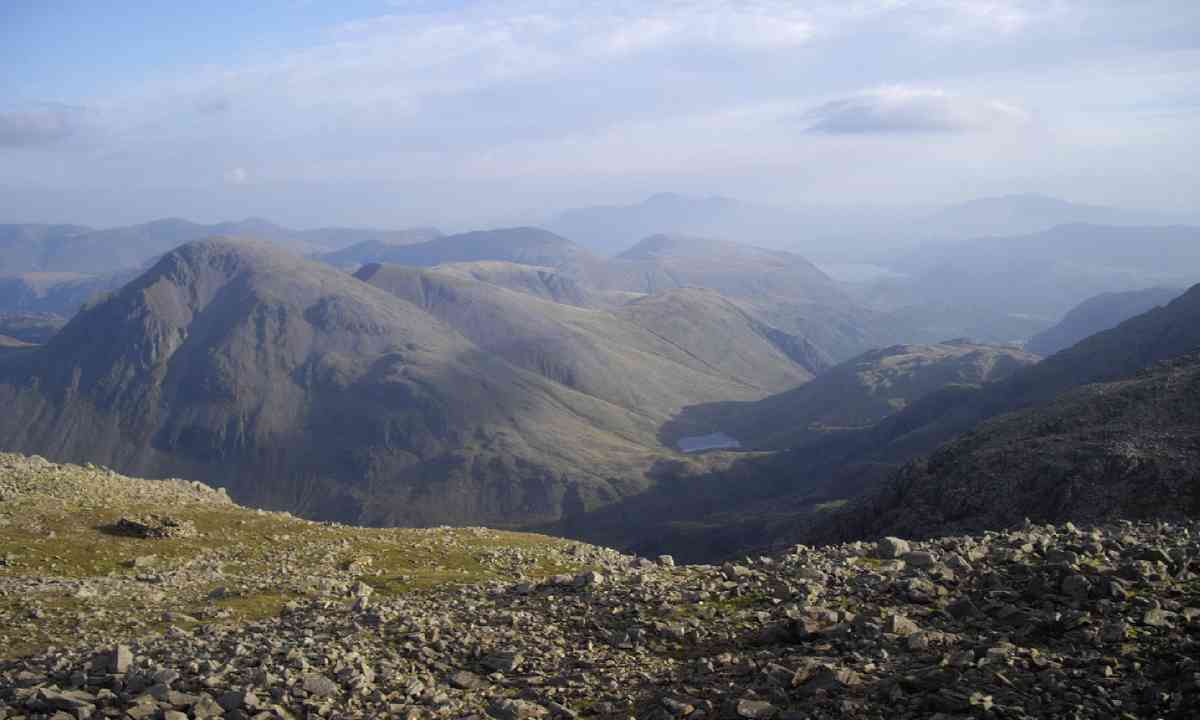 Long after dark there are trails of torches heading up and down the path, treading to their own timetable. Unlike Scotland, whose mountains can seem endless, you can see all corners of the Lake District from Scafell Pike. Even a slither of Windermere is visible, as well as the other great ranges of Helvellyn and Skiddaw.

Although tired, and back in the mist for the summit, we reached the top before the group knew it. The boys even got out the whisky, an important piece of kit for any mountaineer! We descended in the dark, which reveals the mountain in a new way. Your whole attention is on the rocks and vegetation within your torch light, the distance slowly deepening into blue and night. It is the next stage that really adds the difficulty, as people try and get a few hours sleep in the vehicle as you make your way to Wales, and Snowdon.

Getting motivated enough to jump out of the vehicle at Pen y Pass at 3am to start the walk up the Pyg track to Snowdon is always a mixed bag. Some people can feel the end of the challenge in sight, while others who have had no sleep are less enthusiastic. Any hesitancy is dispelled when the walk begins, starting with the dramatic view down the Llanberis pass and then heading towards Snowdon itself, with the great Trinity face before you. 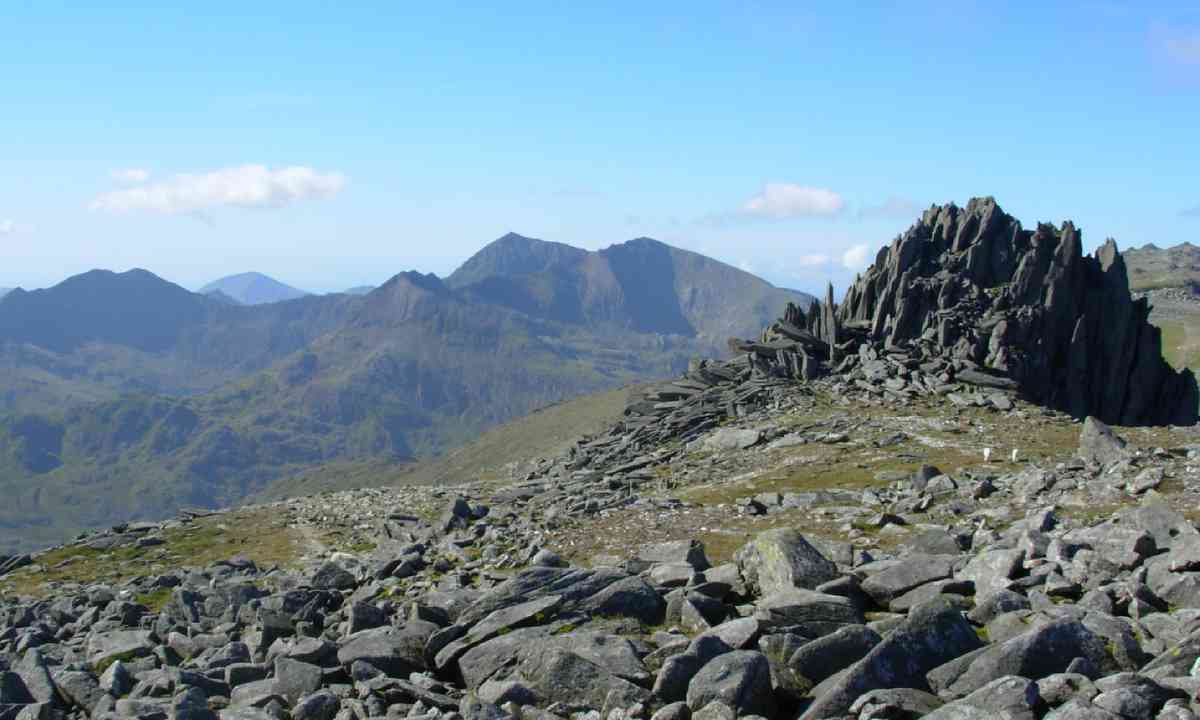 Or, depending on your timing, this section could be in the dark, but most are at least on the summit when the sky lightens and the whole of Snowdonia is laid out below them.

Unfortunately, when we opened the minibus door this time, the wind and rain were in before we were even out. The weather was awful, and we had barely made it half way up before we were soaked to the bone and the wind was gusting with such force that several group members were clinging to rocks for security.

Since the mountain only gets more exposed, I made the decision to abandon the attempt, something several other groups were doing around us. It was so severe, my group didn't take any convincing, so we ran away from the hills to dry clothes and a hot breakfast. 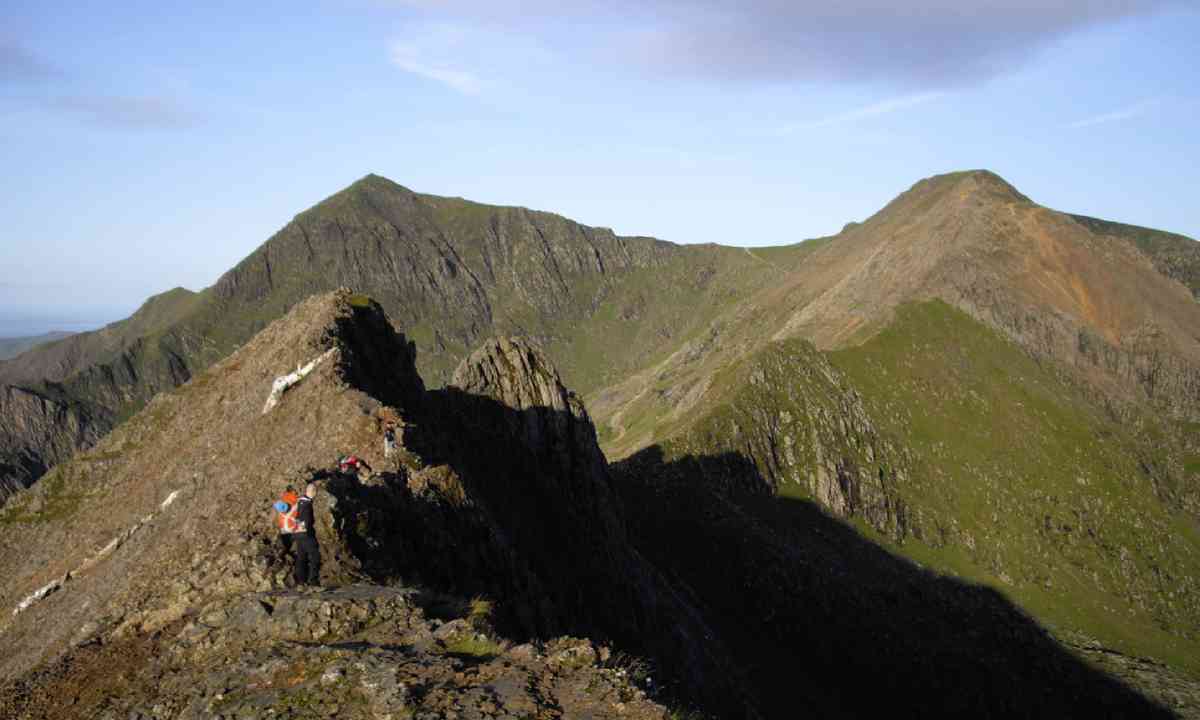 On a clear day, Snowdon is a peak that dominates everything around it. Unlike Scafell Pike, which is an unassuming high point in a land of similar heights, Snowdon shoots up into a great pyramid, its many ridges like arms reaching out into the valleys. There are nine walking routes up, several climbing crags, and dozens of lakes. Hopefully as you head down Snowdon, you have time to appreciate where you are, but lots of people are running by this point, keen to get within the 24 hour window.

Which brings me to the final point, what the whole thing is really for. Many groups raise thousands of pounds for charity, an excellent achievement indeed. But nearly everyone who I take on the challenge says they wish they had spent more time in each place, had longer to look at the scene, to take their time and explore more of the mountains. I hope most of them have headed back to the hills later in their lives, and if the challenge opens the door to that, then it is more than worth it.