How to plan a trip to the Galápagos Islands

The Galápagos Islands top many a traveller's bucket list. Most of us dream of making a pilgrimage to this mystical archipelago – but it's time to stop dreaming and start planning.

What's the best way to explore?

Boat tours are often cited as the easiest way to explore the Galápagos (some trips are even suitable for children), and there are certainly plenty to choose from. Most will provide nature guides – and with almost all land and sea here protected as natural reserves, your access to the majority of the islands would be limited without them. You could find yourself on one of the world's best cruises for adventurers – spotting incredible wildlife from on deck.

When's the best time to go?

Prices tend to be at their lowest during the low tourism seasons of April/May and September/October. And whilst there is never a bad time to visit – temperatures don't vary very much and very few species migrate – you might end up sacrificing some sightings at particular times of year. For example, dolphins and whales usually pass through the islands between July and October, so your chances of seeing them are drastically decreased outside these months. This is similarly true of the waved albatross, a migrating bird that is most commonly seen in the spring and summer months.

Weather-permitting, the waters between the islands tend to be calm – but be prepared for a choppier experience if your cruise ventures to the outer islands. Wobbly sea legs? Read our our tips for avoiding sea sickness. 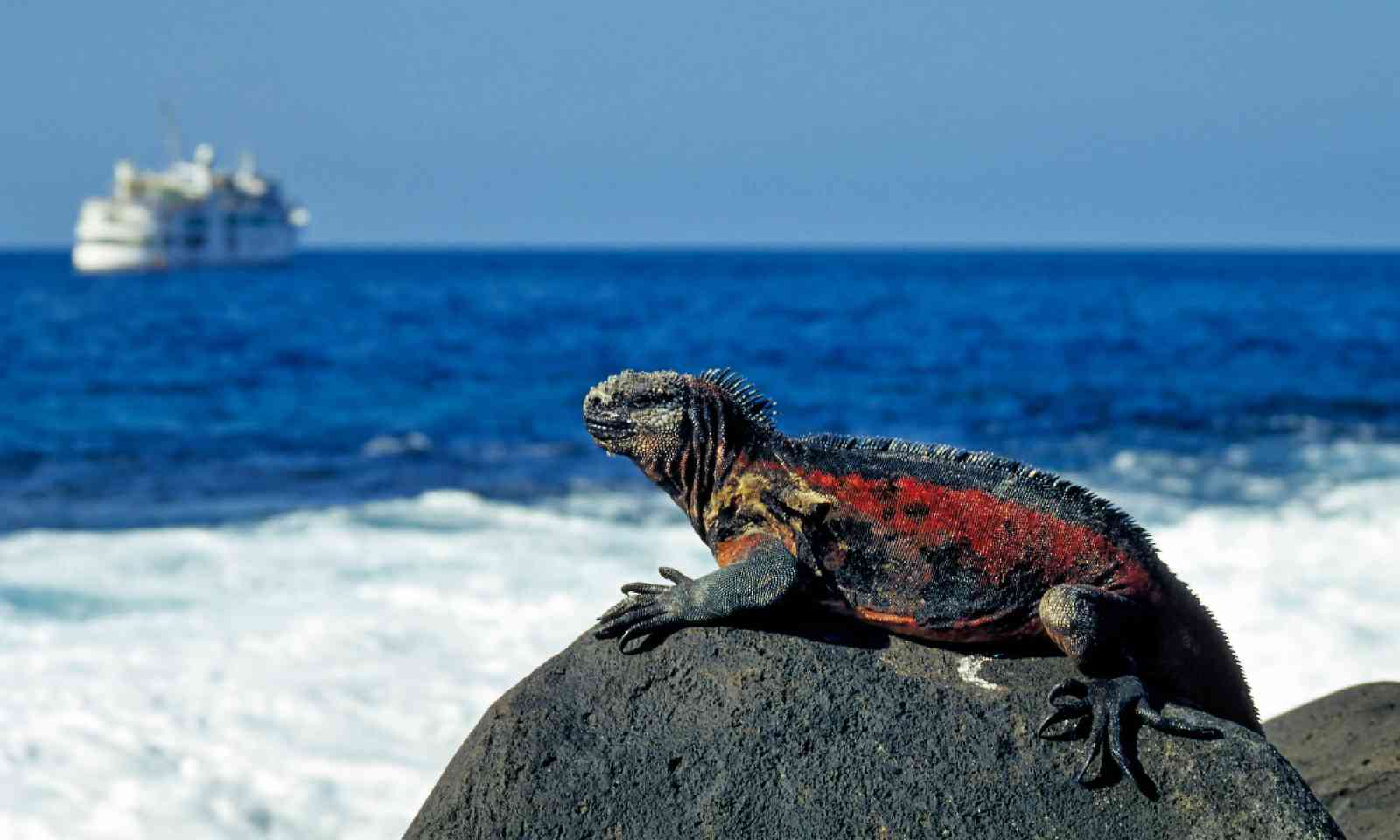 You don't have to board a boat to experience the Galápagos Islands. Staying on dry land – and making your own way around the islands with the help of a local guide – can give you a much better insight into the local culture and lifestyle than a cruise trip ever could.

Browse the best Galápagos tours (including cruises and land-based trips) via the Wanderlust Trip Finder – from 4-day jaunts to multi-week journeys.

It is possible to experience the islands without booking onto a group trip – indeed, you might find it the cheapest way to travel around the Galápagos.

Flights take off from Ecuador (Cuenca, Quito and Guayaquil airports) to one of the islands' two airports – one on Baltra (which will get you to Santa Cruz) and the other on San Cristóbal. Remember: on arrival, you'll be required to pay an entry fee of $100 cash, so make sure you have enough with you! ATMs are sparse, so plan accordingly.

Depending on the length of your stay, the best thing to do is to focus on one or two of the islands. Boat taxis operate from all major ports, so it's easy to get around. 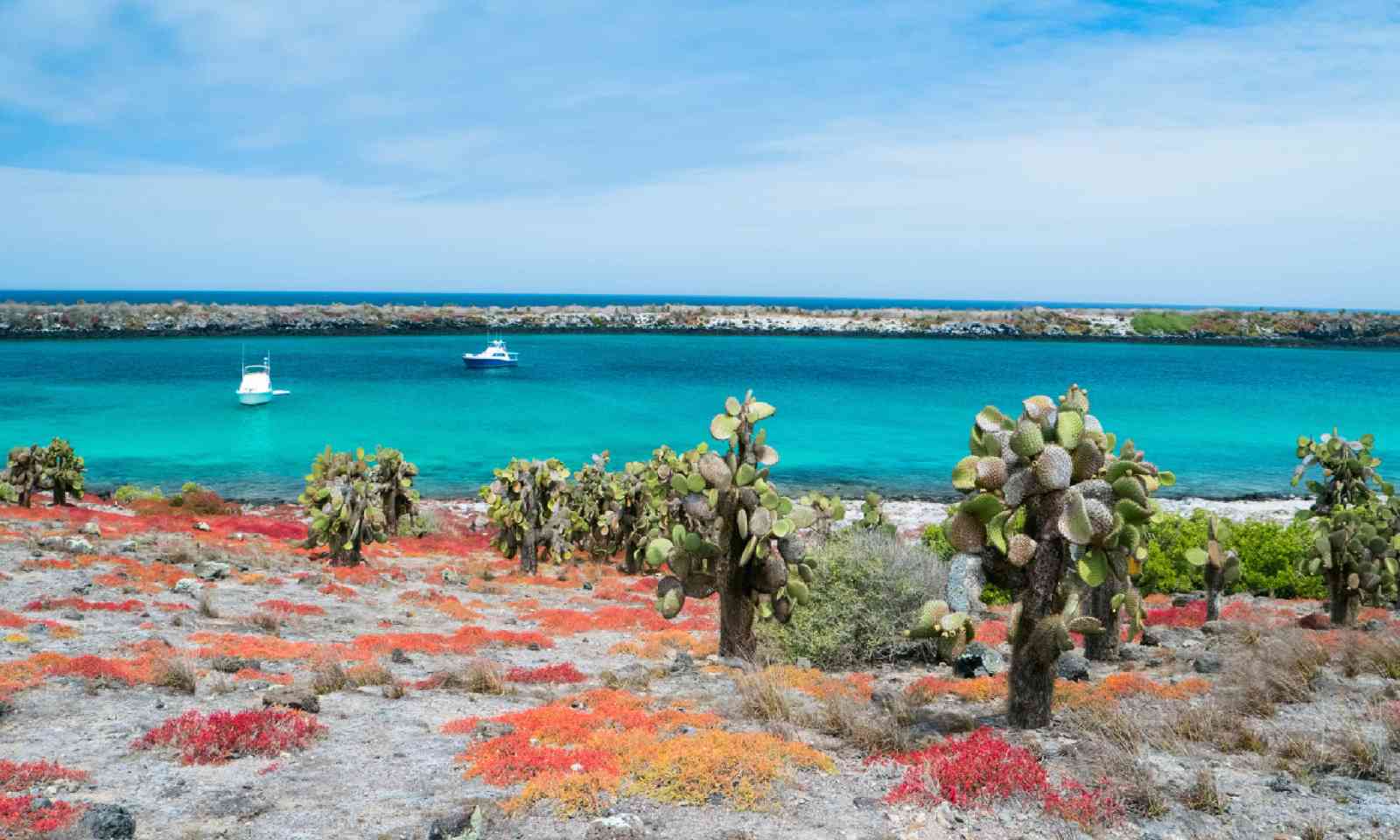 Each island has something different to offer, so do your research beforehand (our Galápagos Islands travel guide is a good place to start). What do you want to see? Are there any island-specific species or seasonal-specific behaviours that you’d like to experience?

For easy wildlife-spotting, you could do a lot worse than Isabela. It is the largest and, some say, the most beautiful island of the archipelago. The town of Puerto Villamil is much quieter and more laid-back than the more populated port of Santa Cruz’s Puerto Ayora, and it will allow you more room to explore at your own pace. It also offers views from the Sierra Negra volcano – but you'll have to earn them first with a 16km hike. You can book this trip through your hostel and most tour operators.

The highlands of Santa Cruz are home to El Chato, one of the islands' best giant tortoise reserves. To save some dollars, brush up on your Spanish and negotiate a fare with a local taxi driver from Puerto Ayora – they will take you up there for the day. They will also be able to take you to the Lava Tunnels and the 'twin craters' (actually sink holes) of Los Gemelos.

Guided day tours are widely available in the towns – especially Puerto Ayora and San Cristóbal's Puerto Baquerizo Moreno – so there are plenty of opportunities for further exploration. Head to the island of North Seymour at any time of year to witness the bulbous scarlet chests of the mating male Frigate birds. And if you visit around May, you might even spot the legendary blue-footed booby.

Free things to do in the Galápagos

Believe it or not, it is possible to experience the Galápagos Islands on a budget. Having evolved in an atmosphere free of any major predators, the animals of the Galápagos roam freely with very little heed given to human presence. This means that you never have to look far to spot myriad species – and it also means that it’s essential to respect your surroundings. You'd be surprised how many visitors don't. Try not to touch the animals.

On San Cristóbal, visit the beaches of Las Loberias and Puerto Chino to see an abundance of sea lions. In Las Loberias, hike on over to the craggy rocks to see the nesting birds. Remember to wear good walking shoes!

On Isabela, there is truly very little need to venture further than the beach. Along the shore and the nearby lagoons, you'll find the best places in the archipelago to witness migratory birds such as pink flamingos, black-necked stilts, whimbrels and gallinules. You'll also see penguins, seals, lava lizards and endless hoards of marine iguanas. After their mating season (December-January), the iguanas shed their colourful skins and take on the same hue as the volcanic rock. 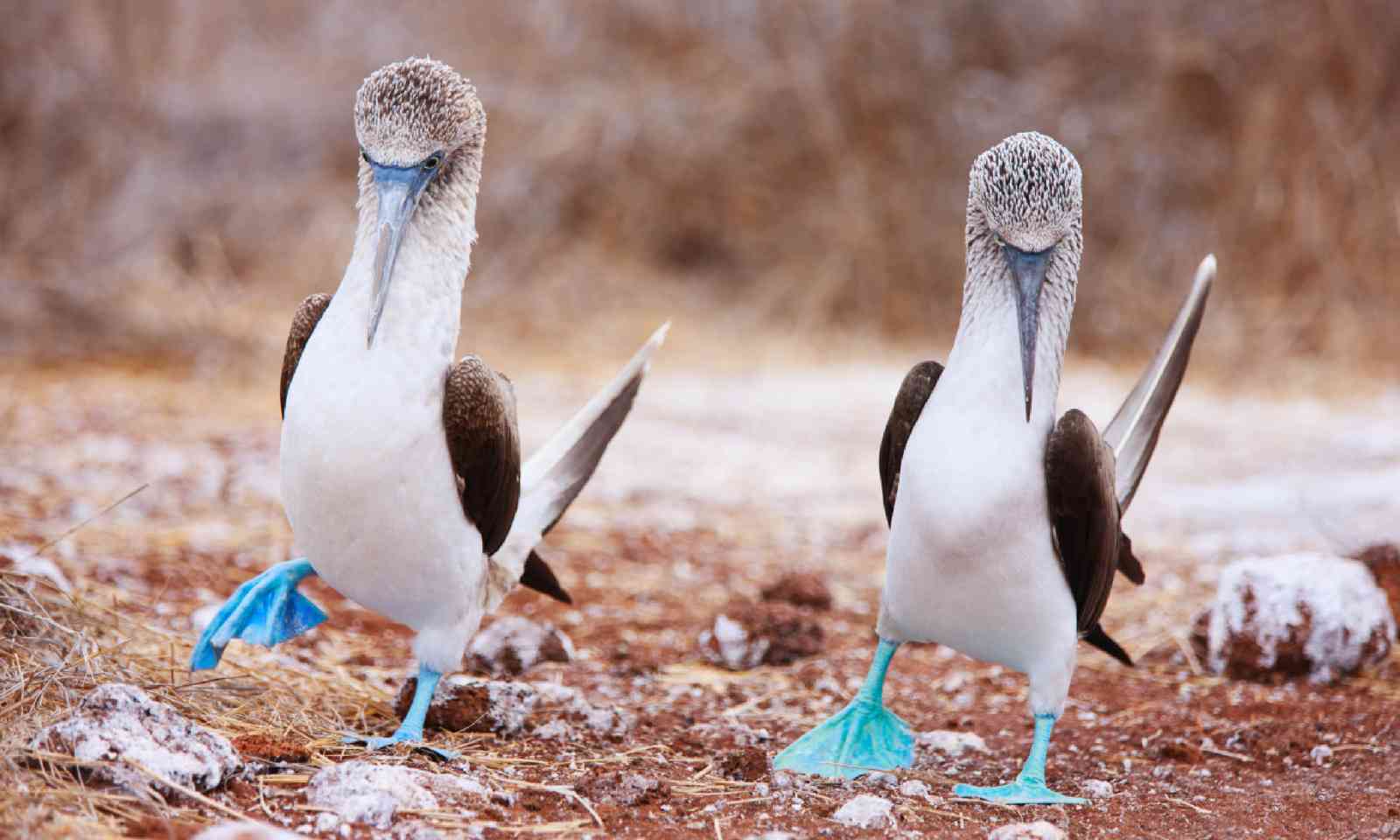 To the far end of Puerto Villamil, the road forks. One path will take you to the Wall of Tears (a wall built by the inmates of a former penal colony), and along the other you'll find Isabela's tortoise reserve and a watering hole popular among the pink flamingos – come at dusk. It's 5km to the Wall of Tears – so it's best to hire a bike. Otherwise, just enjoy a peaceful walk through the wetlands and stop to appreciate the odd wandering giant tortoise.

On Santa Cruz, you’ll find the Charles Darwin Research Centre located in Puerto Ayora (free admission). Here you’ll learn about the creation and development of the Galápagos, and witness the giant tortoise breeding programme in action. Nearby you’ll also find attractions such as the 'secret' swimming cove of Las Grietas and the pristine beaches of Tortuga Bay.

Snorkelling in the Galápagos

Remember that a large amount of the wildlife here is to be found underwater – don't miss it!

Make the most of low tides: head to one of the lagoons dotted around the islands where seals, turtles, rays and other sea creatures become temporarily trapped, making it easier to come into close contact with them. If you don't have your own snorkelling gear, you should be able to hire some from a local tour company. 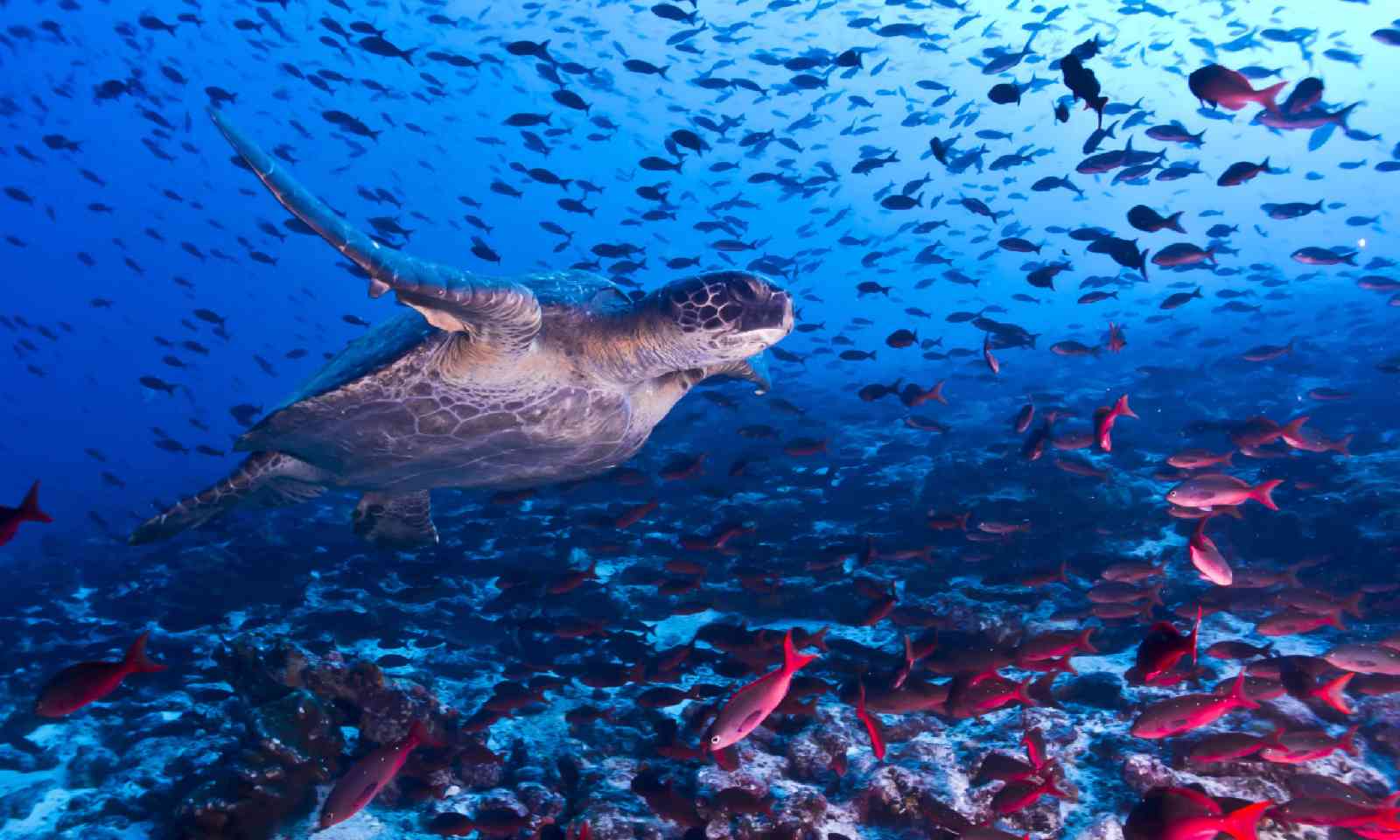 There are plenty of organised trips available from the main islands (shop around for the best deals). Highlights include Isabela's Los Tuneles and San Cristóbal's Kicker Rock. The former features beautiful tunnelled rock formations laden with mangroves and nesting birds. You'll find turtles, sharks, rays, sea lions and all manner of marine life. The latter takes you further out to sea, and to a short channel that runs through the large rock providing a shallow route for hammerheads and various other sharks, rays, and whatever else can fit through.

While underwater visibility is best between January and March, marine life is at its most active between June and December, usually peaking in July. So you’re bound to win either way!

Sometimes it's easy to forget that people live on these islands, and that they have their own set of rituals and activities that get them through their day. Take the time to wander the streets, and get a glimpse at least of how people live here. Have a gander through the fish markets, and watch as fishermen bring in the day’s catch. The market at Puerto Ayora transforms into a restaurant at night, where you'll find a fresh and cheap dinner.

While some of the locals are still wary of tourists, especially in the quieter towns, some won’t be able to do enough for you. In fact, due to tight regulations on working visas and real estate, most of the hostels are at least partially run by people born and bred on the islands. Most will be more than ready with advice of where to go and how to get the most out of your time with them. Don't be surprised if you get invited to a family barbecue or offered a free surfing lesson – but don't be on the lookout for them either.