Chances are, you've been doing it wrong all these years. Cooking pasta the right way is trickier than you thought – but Rome-based food writer Rachel Roddy shows us how it's done

One of the most useful lessons I’ve learned is one I had no idea I needed: how to cook pasta. I was incredulous when, after a few weeks of meeting and cooking together, [my partner] Vincenzo suggested that I might like to do things differently.

‘What?’ I said, placing the pan gauntlet quietly on the table in the old flat. ‘What should I do differently?’ To which he replied: ‘Do you really want to know?’ There was a lengthy pause, during which my pride, irritation and curiosity had a serious tussle before my curiosity and the anaesthetizing effects of a new relationship won out.

‘Tell me,’ I replied. There was another long pause while he lit a cigarette, inhaled, then exhaled towards the window. ‘Use a bigger pan and more water, add more salt, but not until the water boils, stir the salt into the water, start tasting 2 minutes before the end of the recommended cooking time, drain the pasta 1 minute before the time is up, always save the cooking water, and never overcook the pasta.’ In short, a list so long and comprehensive, so infuriating and so obviously true, that I was silenced and we didn’t have pasta for lunch.

A few days later, I did the most familiar thing in an unfamiliar way. I took the largest, lightest pan, the one that holds 6 litres, and for the first time ever I measured the water into it. The rule of thumb is 1 litre water for every 100g pasta, so for 400g spaghetti I needed 4 litres. It was more water than I’d ever used.

I brought it to the boil, which took less time than I thought, then weighed out 40g coarse salt – more salt than I’d ever used – stirred it into the water and tasted. It was, as promised, pleasantly salty, which is precisely what pasta, which doesn’t contain any salt, needs. I checked the time and added the pasta, gently pressing it down with the back of a wooden spoon before re-covering the pan until it came back to the boil.

I stirred and tasted in good time, drained the pasta quickly and saved a cupful of water for loosening the sauce if necessary. It wasn’t. I’d warmed the serving bowl; I tossed the pasta first with cheese, then with tomato sauce and served it. I’m not sure what I expected. After well-behaved initial thanks, what I got was silence as Vincenzo and Carlo wound the spaghetti round their forks and ate.

This is a long story for a task that’s usually too obvious to mention, but it’s one that’s executed badly so often, by me at least. In short, pasta needs lots of water and space to cook correctly. Too little water and it’s sticky, overly starchy, claustrophobic and quite simply the pasta won’t cook properly.

The water must be well salted or the pasta will be sciapa (without salt), a mistake nearly as grave as scotta (overcooked) pasta. This brings us to al dente, which means ‘to the tooth’ and refers to the firmness of the cooked pasta that is so desirable. Now, generally speaking, the further south you travel, the more al dente pasta is eaten. Vincenzo is from nearly as south as you can go in southern Sicily and would ideally have his pasta so al dente that it’s as stiff as a Scottish guard and, to some, raw.

I am an Englishwoman who, before moving to Italy, cooked my pasta in much the same way my grandma cooked vegetables: for too long. We have found a middle ground, and it’s usually a minute and a half before the end of the recommended cooking time, when the pasta has just lost its white chalky core, has bite and engages the mouth, but not excessively. 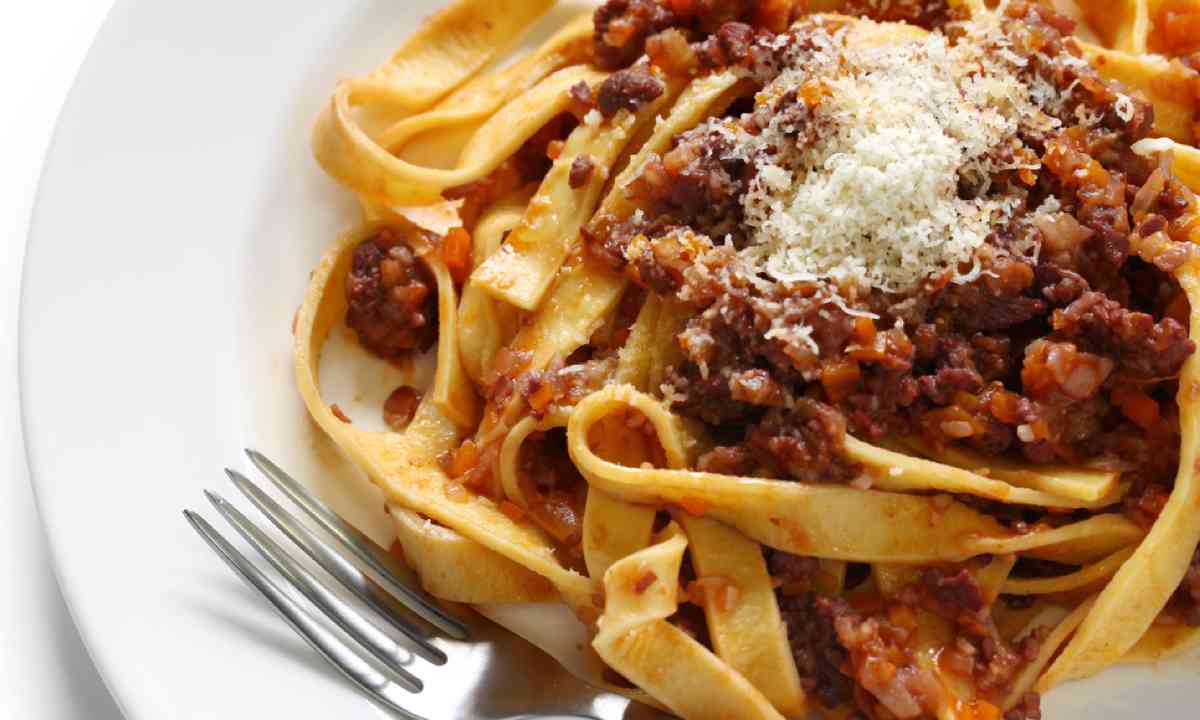 Just the thought of making ragù makes me happy, not least because if you’re adding a glass of wine to the pan, it would be careless not to have one yourself. This recipe takes inspiration from Elizabeth David and her interpretation of a traditional Bolognese ragù: that is, a rich, slowly cooked meat sauce made with olive oil and butter, given a blush of colour from just a tablespoon of tomato purée, depth from red wine and soft edges from the milk.

Its rich, creamy, yet crumbly consistency can come as a bit of a surprise if you’re used to redder, tomato-rich ragùs. Rest assured, it’s glorious, irresistible stuff. Like most braises, it’s infinitely better the next day. I almost always make a double quantity, half to eat with fettuccine (fresh if I am in the mood) and a dusting of Parmesan, the other half in rather more English style.

I have adopted the Bolognese habit of sprinkling the grated Parmesan over the pasta before adding the sauce; the cheese, which melts in the warmth, seasons the pasta deeply and helps the sauce cling to it beautifully. This mixing is best done in a serving bowl, which you can then bring proudly to the table along with a bottle of good Soave.

1. Finely chop the onion and carrot along with the celery and pancetta. Some people like to do this in a food processor.

2. In a large, heavy-based saucepan or deep frying pan with a lid, heat the olive oil and butter, add the vegetables and pancetta with the bay leaf and cook over a low heat until they are soft and fragrant, and the pancetta has rendered much of its fat and is starting to colour. This will take about 8 minutes. Increase the heat slightly, then crumble the minced meat into the pan and cook, stirring pretty continuously, until the meat has lost all its pink colour and has browned evenly.

3. Add the wine, turn up the heat and let it evaporate for a couple of minutes before adding the tomato. Simmer, covered, over a low heat for 30 minutes, by which time the sauce should have deepened in colour and have very little liquid. Add a teaspoon of salt, lots of black pepper and a little of the milk.

4. Cook slowly, covered, for another hour over a low heat, every so often lifting the lid and adding a little of the milk until it is used up. The sauce should be rich and thick with no liquid, but not dry either, so keep a careful eye on it. When you’re ready to eat, bring a large pan of water to a fast boil and, if it isn’t already hot, gently reheat the ragù.

5. Warm a serving bowl. Once the water has come to a fast boil, add salt, stir, gently drop in the pasta and cook, stirring every now and then, until it is al dente. For fresh fettuccine or tagliatelle this will only take a few minutes, but farfalle will take slightly longer. For dried pasta, check the timing on the packet and start tasting 2 minutes earlier.

6. Drain the pasta and turn it into the serving bowl (reserving a little pasta-cooking water), sprinkle over the cheese, then add the sauce. Stir carefully, lifting the pasta from below with two wooden spoons, so it is well coated with sauce. If it seems a bit dry, cautiously add a little of the reserved pasta-cooking water and toss again. Serve.


FIVE QUARTERS: Recipes and Notes From a Kitchen in Rome by Rachel Roddy is published by Saltyard Books, priced £25, and is also available as an ebook.