How to climb Mount Kinabalu in a day

Is it possible to climb South-East Asia's highest peak in one day? Find out how Jonathan and Natalia, our featured bloggers, completed the climb in just eight hours...

Mount Kinabalu is the highest peak in the Malay Archipelago. It stands 4,095m tall, and because it's a doable climb it's a major tourist destination. Each day over 100 climbers start at the Timpohon Gates and then rest at the overpriced shack Laban Rata Resthouse about two hours from the top. At around 2am they're woken up by their guides to climb to the summit and catch the sunrise at 4,095m - a much slower climb at night.

Mount Kinabalu was our first stop on our tour of Borneo. When I began planning the climb, I couldn’t believe the prices that the Laban Rata Resthouse were offering. Jonathan and I are somewhat careful with money and spending over $100 each to sleep for three hours on the floor seemed like a waste of my hard-earned cash. There had to be another option.

Was there another place to sleep at the base camp? No there wasn’t. Laban Rata Resthouse had a monopoly on prison-like accommodations. I completely understand that building those houses was a huge pain at 3,270m, however I also have a ‘suspicion’ that the Sutera Sanctuary Lodges, which owns the lodges at the base and the resthouse at 3,270m, charges a premium because the climbers don’t have a choice but to pay the ridiculous price. They make you stay one night at their base lodge and one night on the mountain. Rip off!

On my quest to find an alternative, I came across a sentence in our guidebook that said you could do the climb in one day. That sentence was followed up by a paragraph of warning and various reasons why you shouldn’t do it one day. I don’t know what it said because I was too elated to find out that you could do the climb in one day and not pay the evil monopolist of Sutera Sanctuary Lodge. So how did it all go down? 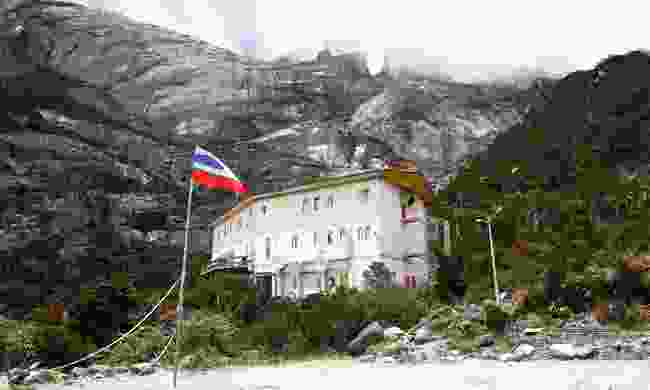 We arrived at the Mount Kinabalu administrative office in the early morning to sign up for the climb the next day and immediately we were given the run-around. “Oh, you need to go see Mr Peninsus and ask for his permission as we already reached the daily limit of four single-day hikers for tomorrow,” said an admin staff lady. I was crushed, I was so worried that we wouldn’t be able to do it the next day. We were pressed for time since we were heading to Sipadan for diving, which requires bookings be done months in advance. We left the admin office seeking the mythical Mr Peninsus and did not find him. With pleading eyes we returned and asked to be put on the waiting list. She gave us a look-over and gave us paperwork to fill out. “Please be here at 7am to meet your guide.” What about Mr Peninsus?! “I’ll talk to him,” replied the admin lady with a smile. I guess we’re going on a 20km hike tomorrow!

Jonathan felt that a 8.7km hike up to the peak wouldn’t be enough, so he tricked me into doing the longest park hike after we filled out the paperwork. No big deal for him as he was high on two 7-Eleven slurpees he had in Kota Kinabalu the previous day. Unfortunately, the only sightings on that hike were a couple of cute birds and one leech between Jonathan’s toes. We met our guide, Marius, at 7am the next day and proceeded to the Timpohon Gates in a taxi. Leaving two other day hikers in the dust, our mission now was to catch up to the other two day hikers that left about 20 minutes earlier than us. We overtook those girls in the first 2km of the climb up.

The first 4km of the climb were a breeze – it was steady and it was sweaty. Our guide said that we were keeping a good pace and that we should try to limit our stops so we could make it to the peak by noon. As soon as Marius uttered those words, I entered the “Natalia Boost Mode” or as Jon called me that day “Mountain Goat”.  Just 2km before the Laban Rata base camp it got difficult. My vision became weird, my legs were slowing down and I couldn’t wait for a quick break and some food. Our breakfast consisted of toast and tea. We couldn’t get a packed lunch as the kitchen didn’t open until 7am.

We reached Laban Rata just before 10am and devoured a small bag of dried mangoes and cookies. Ten minutes was all we could afford before we pushed on. Shortly after Laban Rata the vegetation became sparser and then completely disappeared to reveal the famous smooth granite dome. There were no ridges and absolutely no grip. The clouds began to roll in and we knew we had to step on it.

“Do it only if you are ready to go on a four-hour Stairmaster. You have to be fit and have decent endurance.” 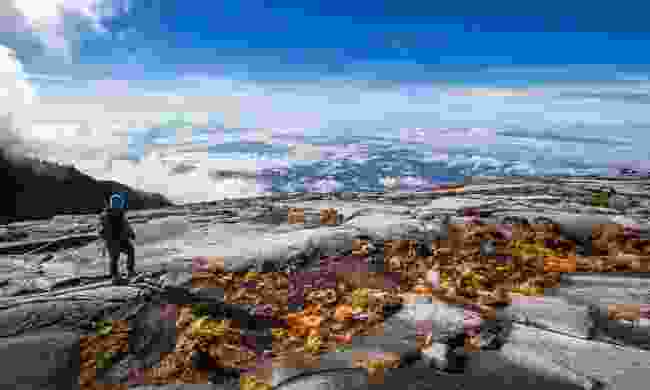 As we came over a bend we saw a big group of slow-pokes making their way to the top. Who are these people? It turned out to be the Sultan and his posse. They were doing the climb in THREE days. We passed the slow-pokes and we made it to the summit at... wait for it... 11:35am! Amazing! We climbed Mount Kinabalu in just over four hours. Marius told us he recently climbed with a couple who took seven hours just to reach the base camp. Whoa… I was so impressed and so incredibly satisfied with what we’d done and how we pulled it off. Even Mr Peninsus couldn’t stop us.

We revelled in our victory for about 20 minutes until the clouds rolled in and poured rain. The smooth rocky surface made the descent cumbersome. I slipped at least three times in the first 30 minutes of the descent. The two girls that we passed earlier only made it to Laban Rata and unfortunately they had to head down without reaching the top. The weather closed in fast and before we had a chance to blink it began pouring. My clothes were completely soaked and I really began to feel the climb in my knees. Marius pointed out giant pitcher plants, which besides a three-foot long worm and a few brown frogs on the side of the trail, was the only exciting flora and fauna that we saw that day. Because we got to the base at around 4pm all the taxis had already left and unfortunately we had to hoof it an extra 25 minutes to our hotel room.

The climb and descent of Mount Kinabalu took us eight hours in total. It was exhilarating and I have absolutely no regrets in doing it in one day. I do recommend to complete the climb in one day but please do it only if you are ready to go on a four-hour Stairmaster. You have to be fit and have decent endurance. Jonathan and I had just finished cycling 700km across Korea and had Korean mountains to train on so I feel we were reasonably prepared for the climb.

Also, be ready for some pain. My body was in pain for about a week afterwards. Also, I’m not entirely convinced that the water that is offered on the mountains is safe to drink (even though the guide said so) as we got food poisoning the next night. Word of advice, don’t drink the mountain water, bring more snacks than dried mangoes and be nice to the administrative staff.

Jonathan and Natalia are a couple who specialise in taming temple monkeys, finding the best back alley deals in South-East Asia and cycling across any country they decide to live in.