How to busk your way around the world

Could you sing - or strum - for your supper? And maybe for a ticket to the next town as well... Rosie Driffill reveals how to turn your talent into a means of seeing more of the planet

Ever fancied busking abroad but never been able to muster the courage? Or perhaps you've always had it in you but your fear of being moved along by stony-faced police put you off? Well, up until two months ago I shared your unease, but having researched the topic thoroughly – and having cajoled an amenable gang of Americans as and when their travel plans coincided with mine – I've managed to earn a few extra pennies on my travels and challenge myself to boot.

From sourcing instruments to sussing out venues, these tips will help you conquer your fears and hopefully earn a bit of cash as you go . . .

OK, so you might feel fine about going it alone, but if you're a first-time busker and your performing depends on your finding a group of like-minded artistes, then it would be prudent to source a small group well in advance, especially if your travel plans aren't allowing you much time in each place.

Putting up notices in university buildings, as well as on youth hostel noticeboards, can help you find singers and musicians of a higher calibre than those you might find by word of mouth.

That said, if you're just doing it for a bit of a laugh, simply putting the word out in a local youth hostel/telling someone they're an amazing singer and asking them if they'd ever considered busking after a few drunken chants in a local bar can work too.

If you don't have an instrument, you'll just look like a bunch of louts singing on the side of the road, and are more likely to draw attention for the wrong reasons. I got lucky.  A group of American friends I met in Paris had a mandolin with them, and the youth hostel we were staying in loaned out instruments.

But for those who aren't carrying an instrument with them, again putting an advert up in a local supermarket/youth hostel/university building can get you results, as can searching bric-a-brac stores, flea markets and charity shops, of which there are ample in bigger cities. 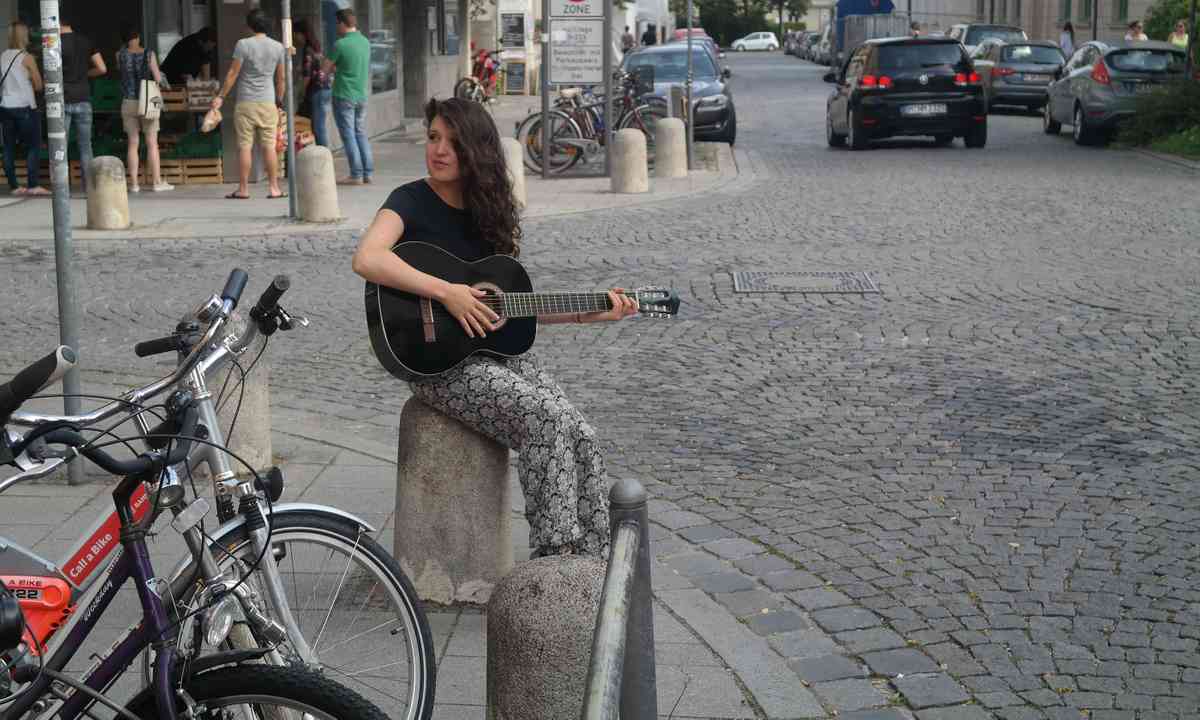 Will the ambient noise drown out your sound? Are people in a rush or at ease? Are people hanging around for a while, e.g. staying in one spot for lunch? Is this already a more established musician's spot? All these factors will influence how much people are willing to listen to your music and give you money.

Take the time to scout out an ideal area before you begin. Walk around for a couple of days before you begin in order to get a feel for the area. In Paris, the square in front of the Centre Pompidou and Montmartre (both considered 'busker friendly' where a licence isn't required) are great spots for busking; cramped metro stations aren't. Check out the World Busk website for tips on where is best to busk in your destination city.

Don't forget to do your research, either. Some areas require a permit, which isn't always easy to source. Before busking in Munich we had to visit the town hall (arriving very early as they only gave out 5 permits per day to the first five acts deemed good enough to perform), audition (X Factor it ain't but it's still a scary affair if you've never done anything like that before), pay ten euros for a permit, then make sure we were only performing in designated areas between set hours – and change location every hour lest we became a nuisance.

It's also illegal to busk in Munich without some form of ID, so it's always worth checking out whether passports and permits are required or you could face a nasty fine.

Think about where your audience is going to stand. When we first busked in Paris, people who stood watching blocked the entry to a nearby alleyway which became a little problematic, so make sure your spatial awareness is at the fore when setting up.

Likewise, be careful in metro stations. If people are running for their train they're not going to appreciate you standing in the way, no matter how many octaves you can straddle.

Loads of buskers sing English songs whether they're English or not, so you've got the edge with Anglophone tourists if you're a native speaker. Well-known Bob Dylan, Oasis and Beatles numbers go down particularly well, but be prepared for some random requests; a group of Hungarians asked if I knew any Sheryl Crowe (I didn't).

Make sure you know the words as well – luckily we had 4G and a tablet, so accessing lyrics that we weren't quite sure of wasn't a problem, but it doesn't look particularly natural, so make sure you spend a bit of time practising before you start.

6. Be prepared for oscillations in the cash flow situation

When we sang at Montmartre in Paris, we didn't earn anything for a good hour or so, but we persevered and it did pay off in the end. But do be clear about your aims from the start – are you planning to busk to earn some serious cash, or are you just doing it for fun?

The former will demand a commitment to the cause and a preparedness to move around if it's slim pickings in your area of choice. There's no such thing as a 'comfort zone' when busking as the amount you earn and the reaction you get is entirely dependent on the crowd that shows up that particular day.

Charm goes down a treat when busking. You're bound to be fairly nervous at first, but you'd be surprised how far singing with a smile on your face can get you. Busking is like karaoke – really hard to get started but once you do start, you don't want to stop! And don't take yourself too seriously – if you can have a laugh at yourself when things go wrong (which they may well do), the crowd will warm to you.


Rosie Driffill is a freelance writer who focuses on sustainable travel and veganism abroad.