Insider Secrets: How To Be Maltese in 8 Steps

In Malta, you can always spot a tourist from a mile away. The signature scent of sun-block hangs in the humid air... That, combined with sheet-white skin, a guidebook in one hand and a map in the other – and you've officially been stamped with the tourist seal.

You also might want to stop looking at the bus timetable, as the buses tend to run around the smoking/eating/toilet habits of their drivers.

2. Drink your tea out of a glass

If you’re strolling along the main street in the town of Mosta (or any of the village squares) you’ll see tables on the pavement where sweaty old men are sitting, wearing once-white vests (complete with stains) and thick gold chains around their necks. This is the local każin; the Maltese equivalent of a pub.

Coffee is always served from a teacup, but if you ask for tea, it'll be English breakfast out of a glass. It is typically sweetened by a large teaspoon of sugar, and if you want to be authentic (and aren't concerned about your weight) ask to have it with full-fat condensed milk.

Malta's sister island of Gozo makes a great day trip; its quaint houses and small fields give it a rustic charm perfect for a leisurely stroll or a laid-back drive.

One of the places to visit is a small seaside town called Xlendi (pronounced shlen-dee). As you walk down the main road (there's only one) to face the sea, turn to your right towards the cliffs and apologise your way through the outdoor tables of a restaurant.

When you arrive at the cliff wall you'll see a staircase (which is lit up by small paraffin lamps during the summer evenings), which takes you to the top of the cliff and then down into the cave. It's named after a wealthy young woman, Carolina Cauchi, who decided to become a nun and donated all of her inherited land (which included this cave) to the Dominican sisters. Thus, during the hotter days of summer, the nuns used to remove their habits and swim in the privacy of their cavernous abode, away from prying eyes.

Now it's part of public land, you can be like a Maltese nun and bathe in Carolina's cave.

The Maltese adore open-air markets, the most popular one is Il-Monti in Valletta. The Monti sells anything from watches and flip-flops to counterfeit Louis Vuitton handbags and pirated DVDs.

Tourists always pay the price the seller asks, but a local will fight tooth and nail to get the price knocked down, even if it's only fifty Euro cents. See how much you can save, and try your hand at bargaining for a real local experience – and if you manage to do so by passionately gesticulating with your hands, so much the better.

Pastizzi, (pronounced pas-tit-see) for those who don’t know, are the scrumptious Maltese version of fast food. Stuffed with either mushy peas or ricotta cheese, these puff pastry savouries are tasty fuel for sightseeing and beach-hopping.

They can be found everywhere on the island at little takeaway windows with overhead signs saying 'Pastizzeria' – but as every local knows, the best ones are to be found at Tas-Serkin in Rabat (within walking distance of Mdina). Ask near the main bus stop and you'll be directed towards an open garage door, outside which you'll see those same sweaty old men with stained vests and gold chains.

When ordering, whatever you do, don't call them 'cheesecakes' – and most certainly don't use the term in singular (the pastry has a particular shape that has led its name to become a commonly-used euphemism for the female genitalia).

6. Go for a diving competition with Pele 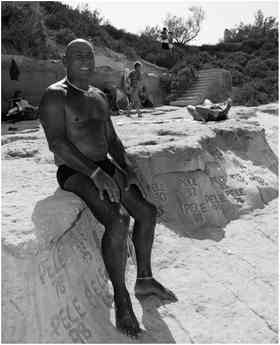 Near the fish market in Marsaxlokk there's a gorgeous little rocky bay known as Peter's Pool, only a 15-minute walk away. A natural ravine sheltered by walls of creamy limestone, beautifully carved by the waves and wind, it is home of Pele the dive king.

In his late 50s, with his name in gold hanging from his throat, he's been coming to this area to dive every day since the seventies. On the nearby rock you'll see his name inscribed with different dates, one for every year spent diving. Notorious for his daring yet perfectly executed jumps, you can try your hand at outshining him. You probably won't manage, but its a great adrenaline rush and well worth the try!

7. Try your hand at marbles

Boċċi, pronounced (bo-chee), is the Maltese version of the game of marbles. Each team has a mix of small round balls and large, heavy cylinders, and the objective is to either get your marbles as close to the jack as possible or to knock your opponent's marbles away from it.

Ask around for the nearest club and enjoy a pint of the local Cisk beer as you play against an old sweaty man (wearing a vest, of course).

8. Attempt to climb the ġostra

The ġostra is a traditional game that goes on during the seaside villages' feasts in summer. The idea is to scramble up a 20-metre long pole in order to grab a Maltese flag which is attached to the top. Don't worry if you slip, as the pole hangs over the sea, so you'll land in the water.

The catch is that the pole is greased up with animal fat, thus making it far from the easiest of endeavours – only for the hardcore local wannabes.