The sea shimmered bright blue, and white-sand beaches stretched away to either side of the rocks on which I stood. This sand was formed by shells and tiny sea creatures, rather than by the local limestone, and dazzled white in the autumnal sunshine, with just the occasional dog walker sauntering by. Someone had told me they’d proposed to their partner here. I could see why. A magical spot.

But, despite the idyllic scene, I kept looking back over my shoulder at the caravan park behind and the sign that announced ‘Gurteen Bay’. I was in the district of Connemara; I own a Connemara-breed horse whose name is Gurteen Mystic – it crossed my mind that he could have been born here. 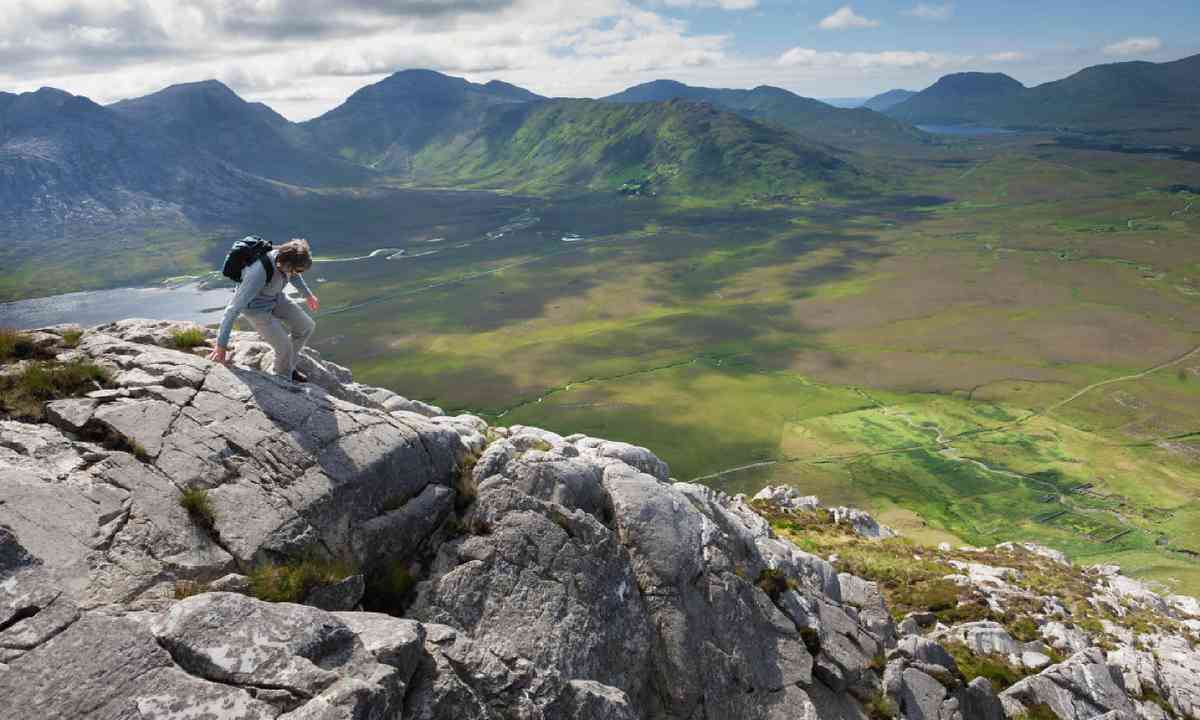 Following an impulse, I went to the holiday park and knocked at the door. “This might sound strange,” I said to the lady busy vacuuming, “but I own a horse and I was wondering whether he came from here.”

She was unfazed by my query. "You’ll need my husband,” she replied, “but he is in America at the moment. Go round to our pony barn, our son may be able to help.”

Round at the barn, where two foals were stabled, Brian Mullen was delighted when I asked him the same question. Yes, of course my horse was born here; Mystic’s mother died a few years ago but they still breed from her daughters. “It’s a bit of a hobby; an expensive hobby.” Brian grinned. He showed me one of the cute foals, explaining that she was my horse’s niece on both sides of her breeding.

“It’s such a shame you missed my Dad! When are you coming back?” asked Brian. “Come back next year and we’ll take you to see all the horses!” 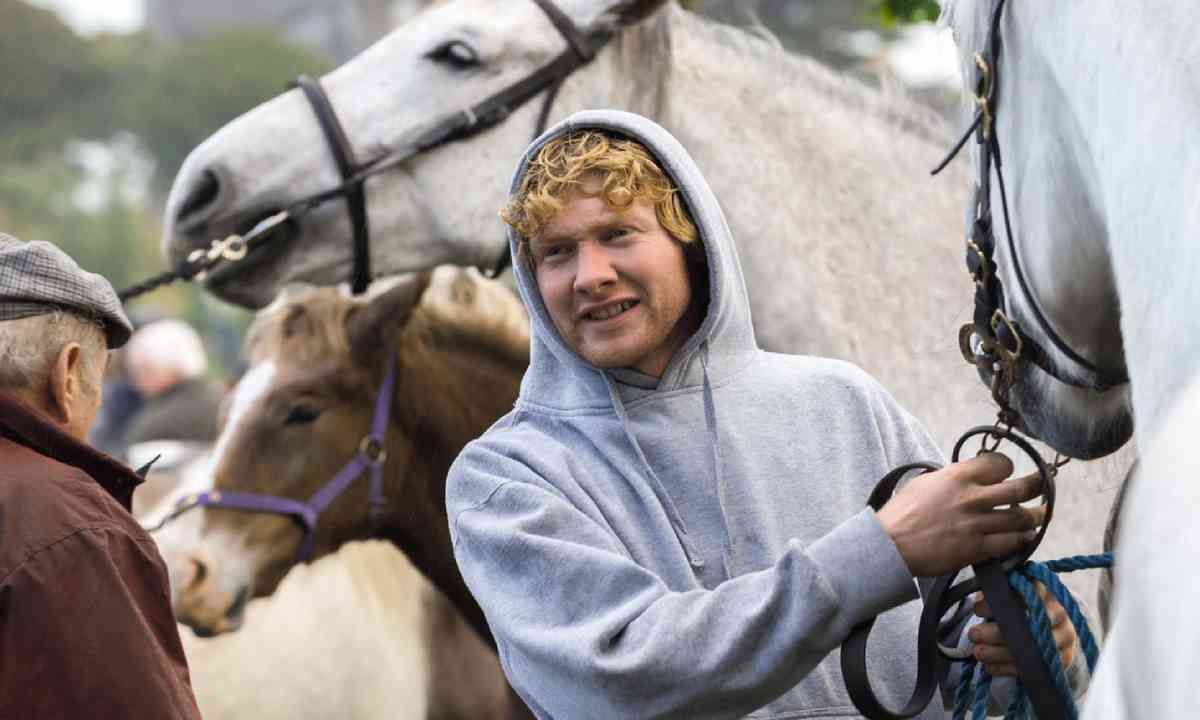 The Connemara ponies are renowned worldwide for their hardiness, intelligence and adaptability. They are nearly always grey (white) in colour and are a common sight in the small dry-walled fields of this rugged corner of West Ireland. Look on a map and you will see speckles of water covering the land. It reality, when you’re on the ground it is the white specks of ponies, cottages and bungalows, that you notice – along with the ever-changing light. It’s an elemental land of peat bogs and heath, loughs and rivers, mountains and rocks. And the ocean, always the ocean.

The region known as Connemara has the Atlantic on three sides, and this ragged coast is part of the Wild Atlantic Way – the romantic yet fitting name given to the 2,500km driving route up the west coast of Ireland. It’s been a marketing masterstroke, putting the west on the travel radar; many small businesses are benefiting from it.

The good weather of summer and autumn 2014 helped too. A ferocious storm was blowing when I flew in but the sun was shining a couple of days later when I headed out on the ocean aboard a catamaran owned by Shane Bisgood. The wonderfully named Brazen Hussy can be hired as an alternative to the ferries that ply the off-shore islands, or for angling, scuba diving or wildlife-watching trips. 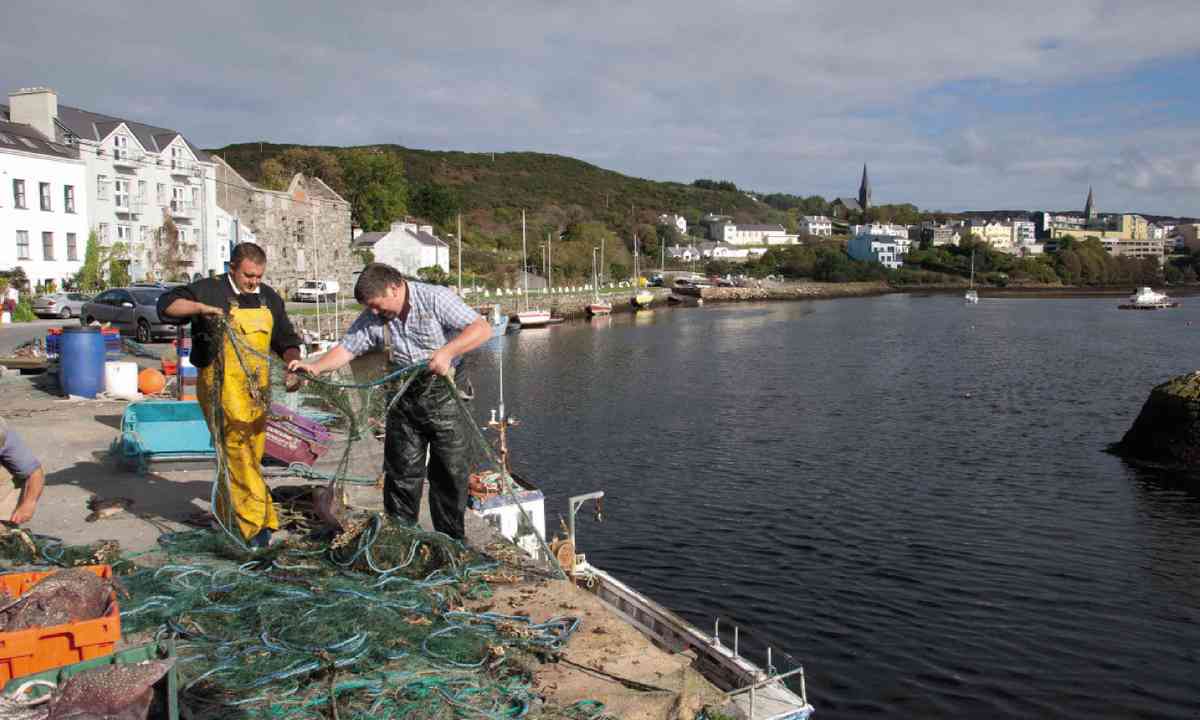 “If you’d been here a few weeks ago we’d have seen thousands of sea birds, including puffins,” said Shane as he took the Brazen Hussy close to some guano-stained cliffs. “We see basking sharks and lots of whales – mostly minkes but blue whales and fin whales too when we’re lucky.”

We had already spotted a pod of dolphins and a minke whale so anything else was a bonus. We passed the derelict houses on Inishark Island – abandoned in 1960 when the government evacuated the last residents – before heading on to Inishbofin and the brooding black castle standing sentinel at its harbour. This 16th-century fort, known today as Cromwell’s Barracks, acted both as a defence against pirates and as a prison for Catholic priests during the Cromwellian period. Indeed, Inishbofin has had a colourful history out of all proportion to its size, including being a pirate stronghold. 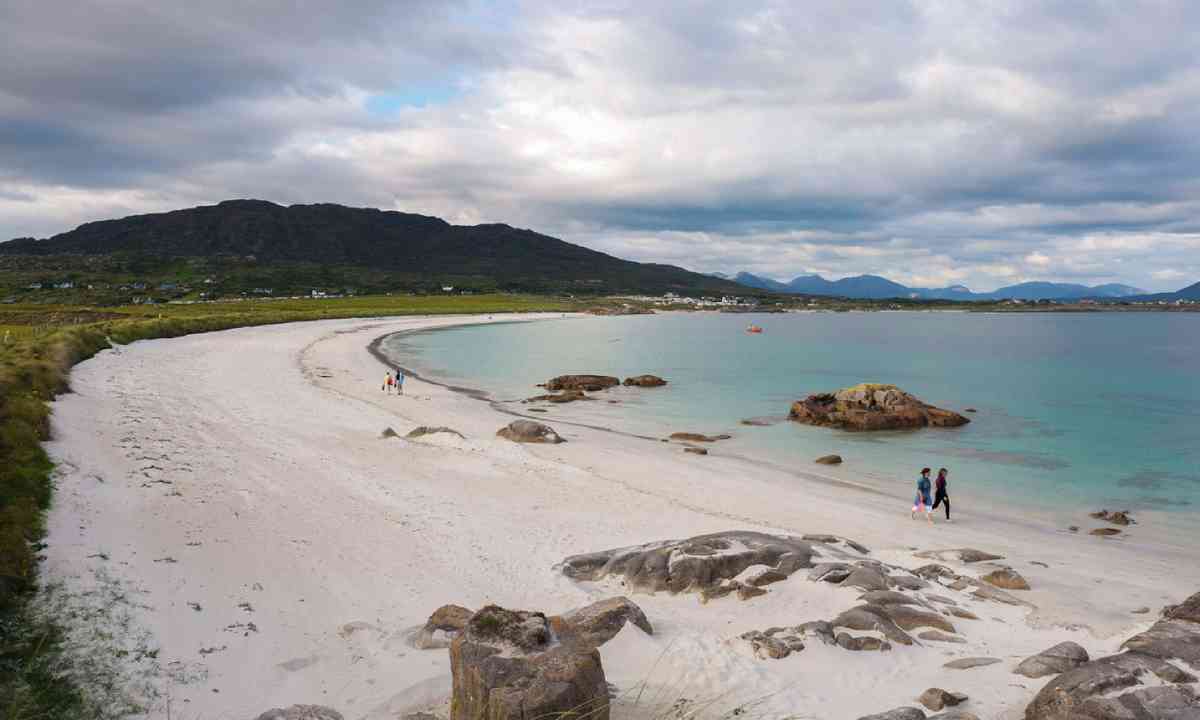 Despite its small population (just 165 full-time residents), the island is now known as an important centre for arts and music, both traditional and contemporary. But the other reason people come here is for the peace, quiet and nature.

We had crab claws and a fortifying pint in a pub. Then, after a bit of a mosey around the island, we set off back to the mainland. The breeze had picked up, and the sea was choppier, but every now and then a whale spout would spurt above the white water.

The next day, in Killary Fjord – which some consider to be the northern boundary of the Connemara region – the sea was like a mill pond and the annual Great Fjord Swim was being held. “You can get changed over there,” said a helpful steward when I dropped by to take a look. Although the sun was out, it was October and I couldn’t imagine the water would be too warm. However, plenty of people were braver than me: 450 souls ploughing through the crystal-clear water.

Further up the fjord were mussel farms, while otters could be seen gliding through the water and scampering along the shore. Every pub and restaurant seemed to offer the local specialities, with Killary mussels, seafood chowder and local crab on most menus. At the lovely Lough Inagh Lodge Hotel the special of the day was prawns from the fjord, caught just hours earlier. “They’re the best I have ever eaten in my life!” exclaimed a lady at a neighbouring table. 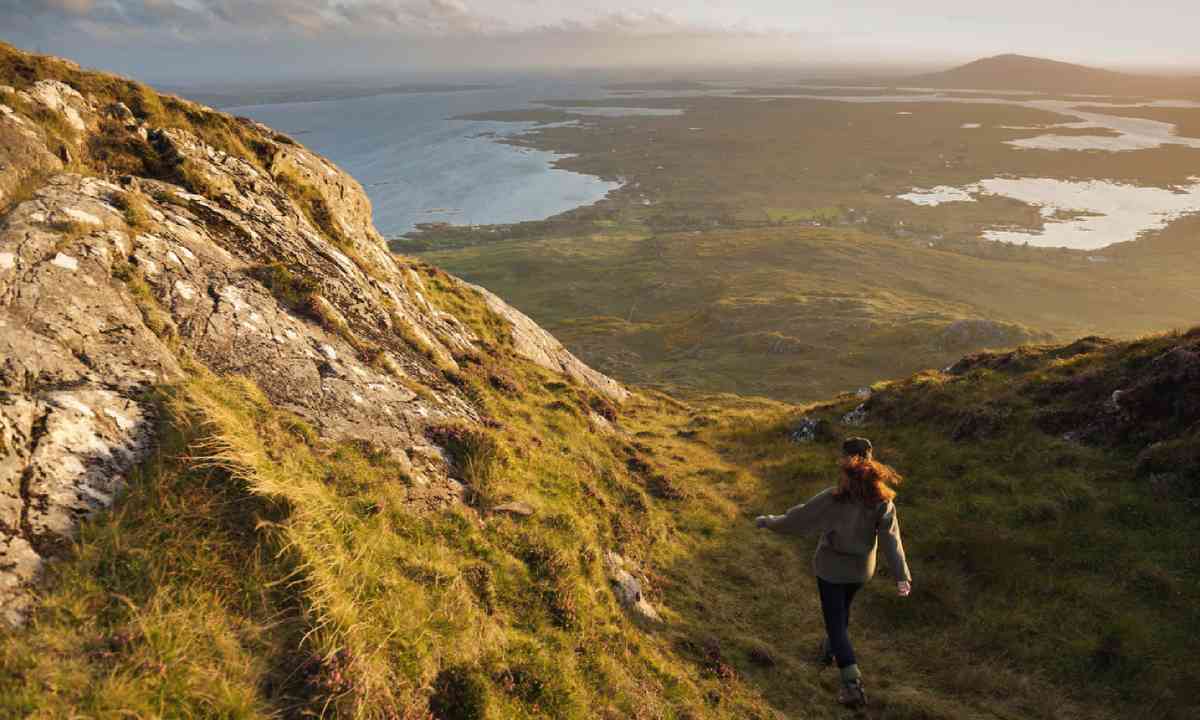 The Wild Atlantic Way might be a driving route, but you need to ditch the car to really appreciate Connemara’s wild beauty. I walked on glorious deserted beaches, took a bracing stroll up Diamond Hill in Connemara National Park, and cycled an electric bike out on a loop from Clifden, the charming ‘capital’ of the region.

But the grand finale was a late-afternoon horse ride to Omey Island. Under overcast skies we galloped on sturdy cobs across the sands to the tidal isle. Turning back, we grinned widely as the horses headed for home across the strand, splashing through pools of water, before automatically pulling up at the edge of the beach.

It was my last evening and so it was only fitting to celebrate in a bar. An American visitor I had met had commented on the friendliness of the locals; he had been taken aback when an attractive woman started talking to him in a bar but – when she invited him to join her boyfriend and friends at a table – he realised it was sheer friendliness and craic.

Equally, in Lowry’s Bar in Clifden, to a background of live traditional music, some of the locals chatted easily to me and my friends. One in particular insisted on buying us drinks, and offered to order us a taxi as an inducement to stay longer.

“But I need to leave early for a flight home,” I insisted.

“Come back next year,” he called as we left.

The nearest airport to Clifden, the main town in the Connemara region, is Knock (1.5-2hr drive).  Shannon is a 2-2.5hr drive from Clifden.

Buses from both airports, and from Dublin, run to Galway; from Galway, buses run to Clifden and some of the other places mentioned in this article – see Bus Éirann and Citylink.

To see the most of Connemara you will need to hire a car or bicycle.

The Lough Inagh Lodge is a welcoming country house hotel with beautiful views of the Maumturk and Twelve Bens ranges. Superb dining too.

The Quay House is Clifden’s oldest building – it was the harbour master’s house, a monastery and a convent before evolving into an award-winning guesthouse. Uniquely designed rooms (most have harbour views).

Ballynahinch Castle is a luxury castle hotel, once home to Humanity Jack, an 18th century MP and animal welfare campaigner. Fly fishing, clay pigeon shooting, cycling and walking are all available within the extensive grounds.

Seafood is very good – try the oysters, mussels, prawns, crab and lobster, and also trout and salmon. Connemara lamb is another speciality in season.

Mitchell’s in Clifden has won awards for its seafood. O’Dowds in Roundstone is a popular pub; try its chowder. Lough Inagh Lodge (see ‘Where to stay’) is highly recommended too. 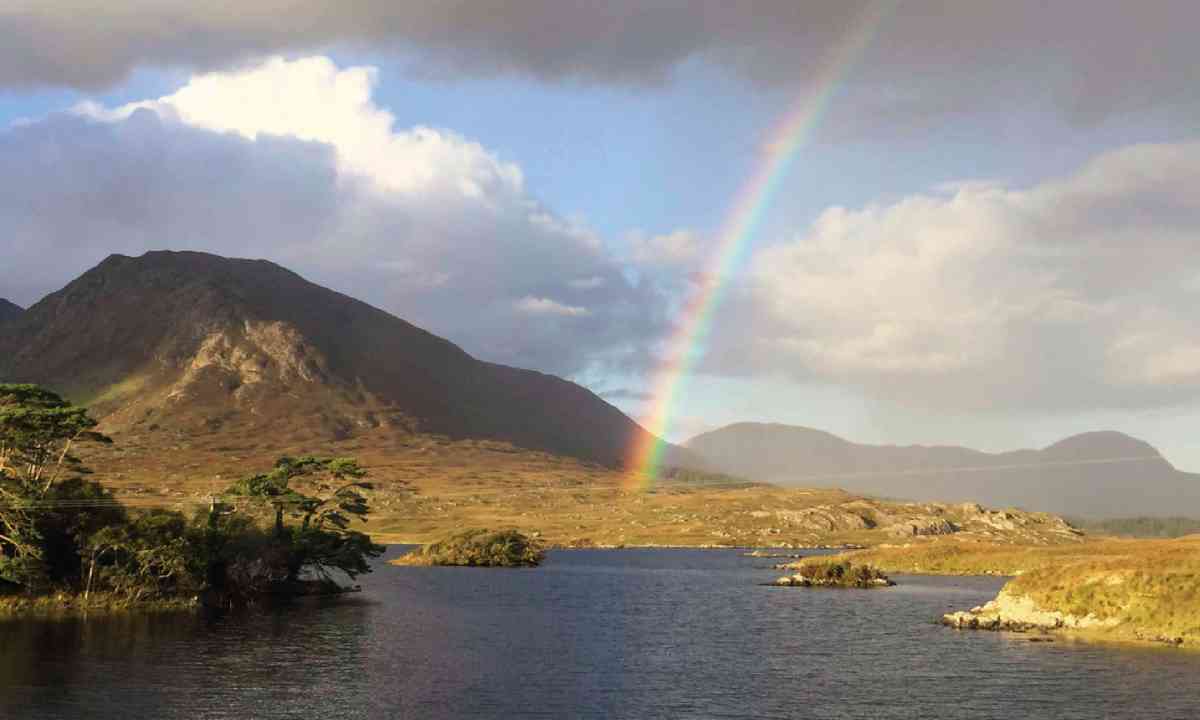 Electric bikes can be hired from Bike Electric Connemara in Clifden.

The Brazen Hussy can be chartered for scuba diving, fishing or island tours. Owner/skipper Shane Bisgood also teaches clay pigeon shooting at Ballynahinch Castle. Alternatively, sail the coast in a 120-year-old Galway hooker or explore Ireland’s only fjord on a 90-minute cruise.

Inishbofin can be reached by the Island Discovery mailboat (several sailings daily; 30 minutes) or by charter. The island has three hotels; for more info, see inishbofin.com and Doonmore Hotel.

Live music can be found in many bars and restaurants, especially in summer. Lowry’s (Clifden) has nightly live sessions, year-round. Best beaches include Gurteen Bay, Dogs Bay, Glassilaun and Sallerna. Trá an Dóilín is covered in pink coral-like sand.

For more on the Wild Atlantic Way see the website or app.

See more photos from the trip!