It's got world class skiing and neon-lit cities, but Japan's northerly island also has untamed back-country haunted by its indigenous Ainu people

From the snowy heights of Kitanomine, I felt as if I could see forever and ski forever. Far below, a blanket of white snow unfurled across the plains of central Hokkaido, to a skyline serrated by the crags of Tokachi-dake.

From this aspect, the mountain did not show the classical conical pose of a volcano; rather, it looked more alpine, with a trio of rocky summits combing fleecy strands of white cloud. However, when I finally got up close to ‘Toka’, I discovered they were not clouds, but puffs of condensation from thousands of blistering hot vents that sing like kettles as steam escapes. On her icy skirts below, there were scalding pools whose banks were snowdrifts.

"Let’s ski on!” called Mari Yamazaki, my guide to the Furano ski area. 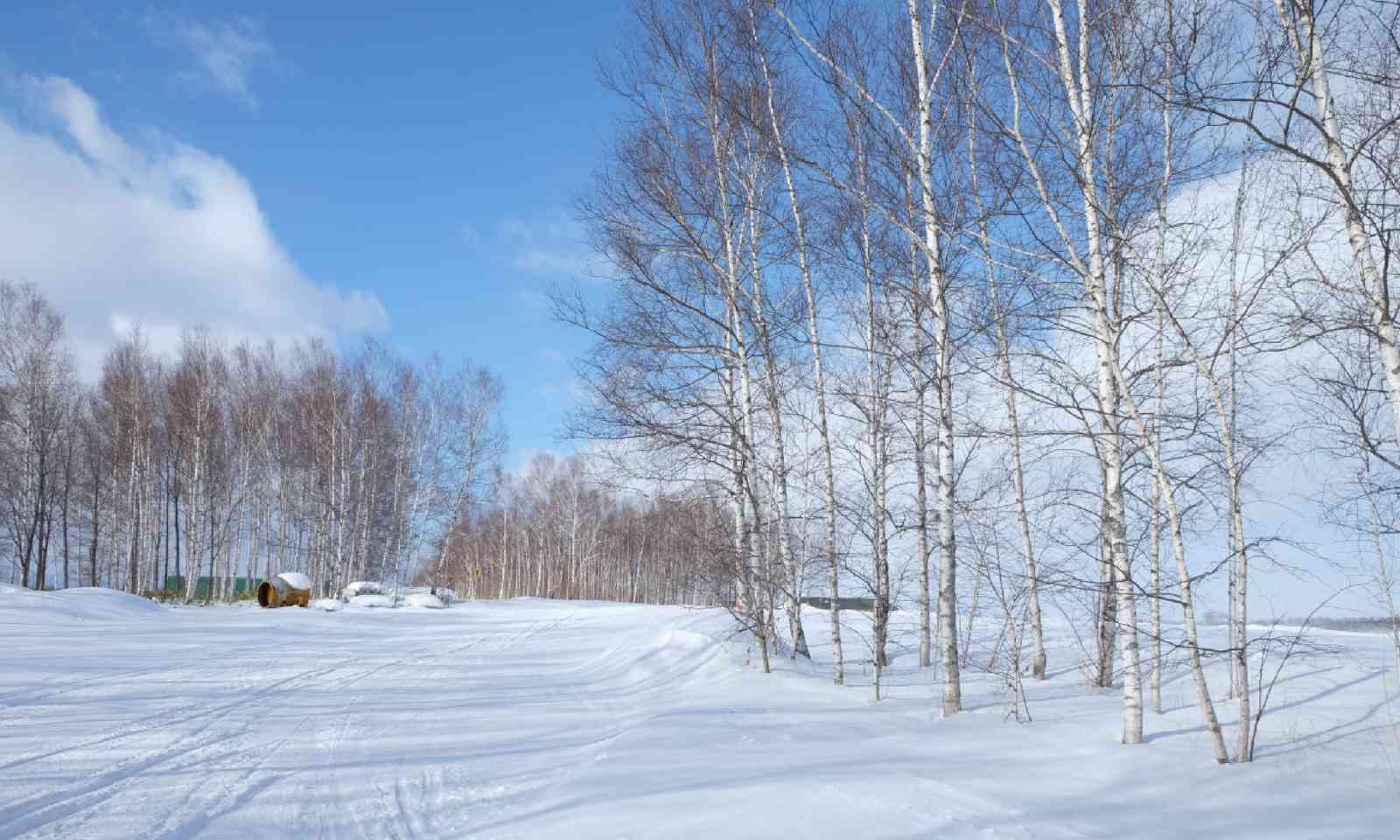 I followed her over a ridge and down into a deep, scallop-shaped bowl where we floated – flew, almost – through downy crystals up to our thighs. Such an incredible mass of snow; so little resistance. I surrendered to momentum and let gravity do all the work, tracing fresh tracks, which created an unexpected Zen-like feeling.

"This is awful year for snow… I think it is the warming planet,” said Mari who is originally from Honshu, Japan’s largest island, but has lived in Hokkaido for 15 years. I blinked, a touch bemused. If piles of fluffy snow like this constitute a bad year, I told her, then a fair-to-middling year would be the stuff of legend to any skier raised in the Alps.

We snaked through a silent forest of silver birch trees whose crooks are the lairs of juhyo (snow monsters) – natural sculptures formed when trees become caked with wind-blasted hoarfrost. We re-joined the immaculately groomed piste, tackling the tricky Furiko Zawa black run before swooping the length of the giant slalom World Cup course leading back to the chairlift. The white-gloved attendant bowed graciously, wished me “Ohayo gozaimasu” (good morning) and fussed about with a little brush, sweeping the seat for me.

“Arigato gozaimas” (thank you so much) I attempted in reply, returning the bow. I was thrilled – not because my salopettes were being kept dry, but at this captivatingly Japanese encounter.

I was still chuckling an hour later, while sitting in a mountain hut trying to follow the etiquette of eating noodle broth with chopsticks. (Scoff your noodles with the sticks, then slurp the soup straight from the bowl – the more noisily, the more polite).

From November through to April, icy winds from Siberia dump extravagant piles of snow on Hokkaido, the most northerly of Japan’s four main islands – even in a ‘bad season’. It is some of the lightest, driest powder on the planet. But I hadn’t spent the best part of 24 hours in planes and airports to get here just because this is the land of the falling snow.

Hokkaido is Japan’s furthest-flung extremity and has almost mythical status among urban Japanese as a wild frontier. The island is fringed by ports facing Russia across the ice-clogged Okhotsk Sea and is populated by brown bears and strange, mysterious creatures that are revered by the indigenous Ainu people. These aboriginal inhabitants of Hokkaido are today near extinction as a full-blooded people, though their myths and legends are very much alive. 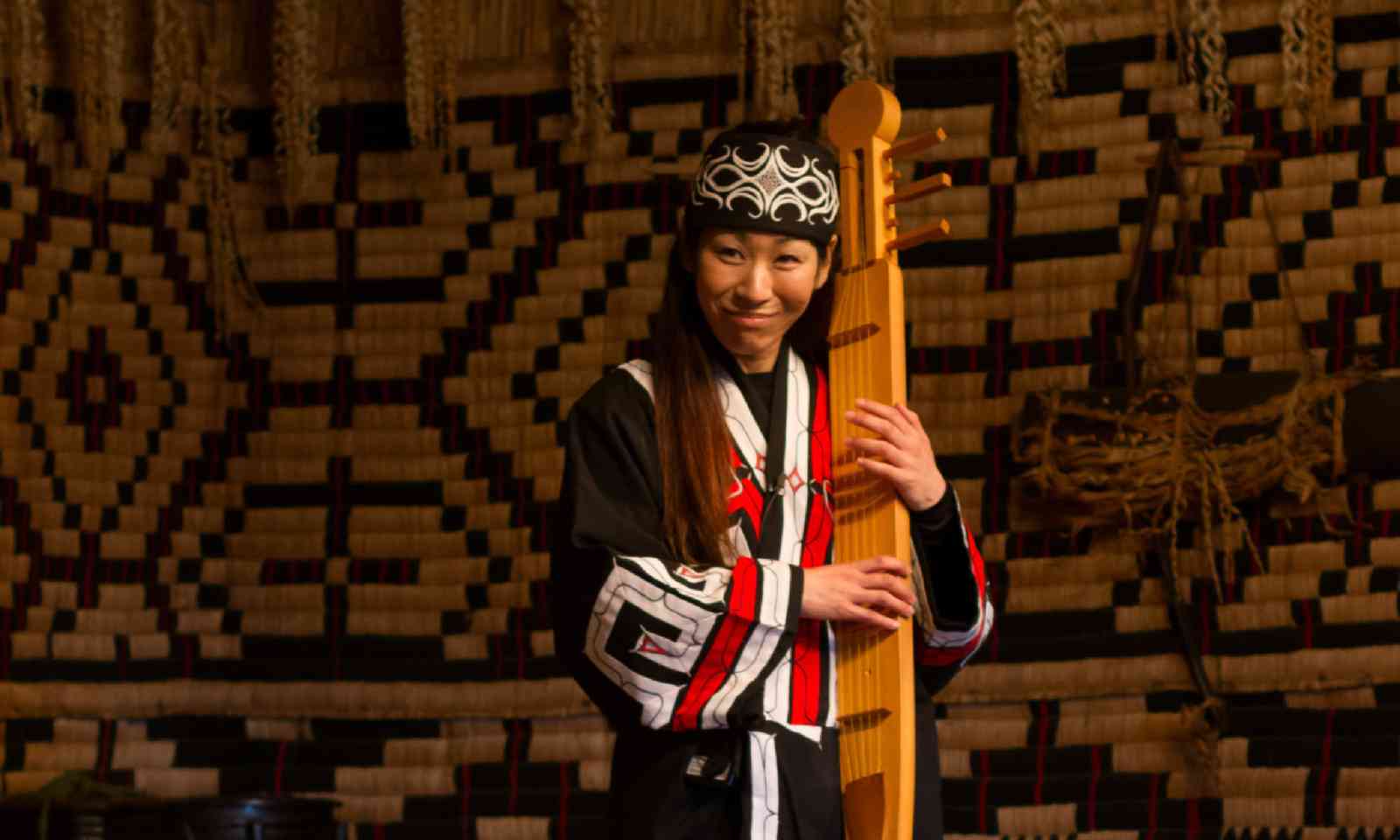 But although Hokkaido promises wilderness, it also offers bewilderment. The island’s capital Sapporo – Japan’s fifth-largest city and home to the famous beer – is a classic Japanese metropolis: a beeping, flashing city of electronic signs and billboards, banners and taxis.

You certainly don’t have to go to Tokyo or Osaka to plunge into a night-time metropolis where mundane things appear bizarre to the visitor. For instance, menus would be lost in translation if it wasn’t for plastic models of dishes outside restaurants; yellow-haired girls apply ‘sock glue’ to hold up their fluffy tights; and it takes time to work out the electrics that control the seat temperature and strength of bidet spray in public toilets. Perhaps I was naive to have expected otherwise, but the sense of deracination – so rare in the global village – took me by surprise.

On the other hand, people are so friendly and helpful that it is impossible to feel lost or threatened. When I needed to find the right train (which was punctual, literally to the second) for Furano, an entourage of locals keen to practise their English gathered to help.

Leaving behind the neon city, we streamed into a vast emptiness littered with grey volcanic pebbles and ravaged by cold dust devils, while icy peaks pricked the horizon. I was reminded of a journey I once made across the Tibetan plateau, give or take the occasional birch wood.

When I arrived in Furano, the station’s digital display read -14°C, not including the ample wind-chill. Pillows of snow weighed down the eaves of wooden farmhouses with low doors and sliding paper-covered windows. There are modern hotels at the edge of Furano, but it is essentially a small lavender- and onion-farming town, with pockets that look and feel like a feudal village.

On my first night I was drawn to Robata – a rustic tavern with old smoke-blackened timbers and lit by hurricane lamps. Local people were drinking sake warmed in urns heated on a charcoal-fuelled hearth; soon we were all raising cups in unfathomable toasts.

I gathered from my new friends that I had arrived in Furano too late to celebrate the ancient winter festival of Suijin-sama, the water deity who sends the much-needed rains in spring, and is appeased annually by the building of a kamakura (igloo). Happily the igloo was still there, secularised as the Snow Dome Ice Bar. Here the evening progressed in a cavern of ice filled with frozen sculptures of weird creatures of Ainu legend. 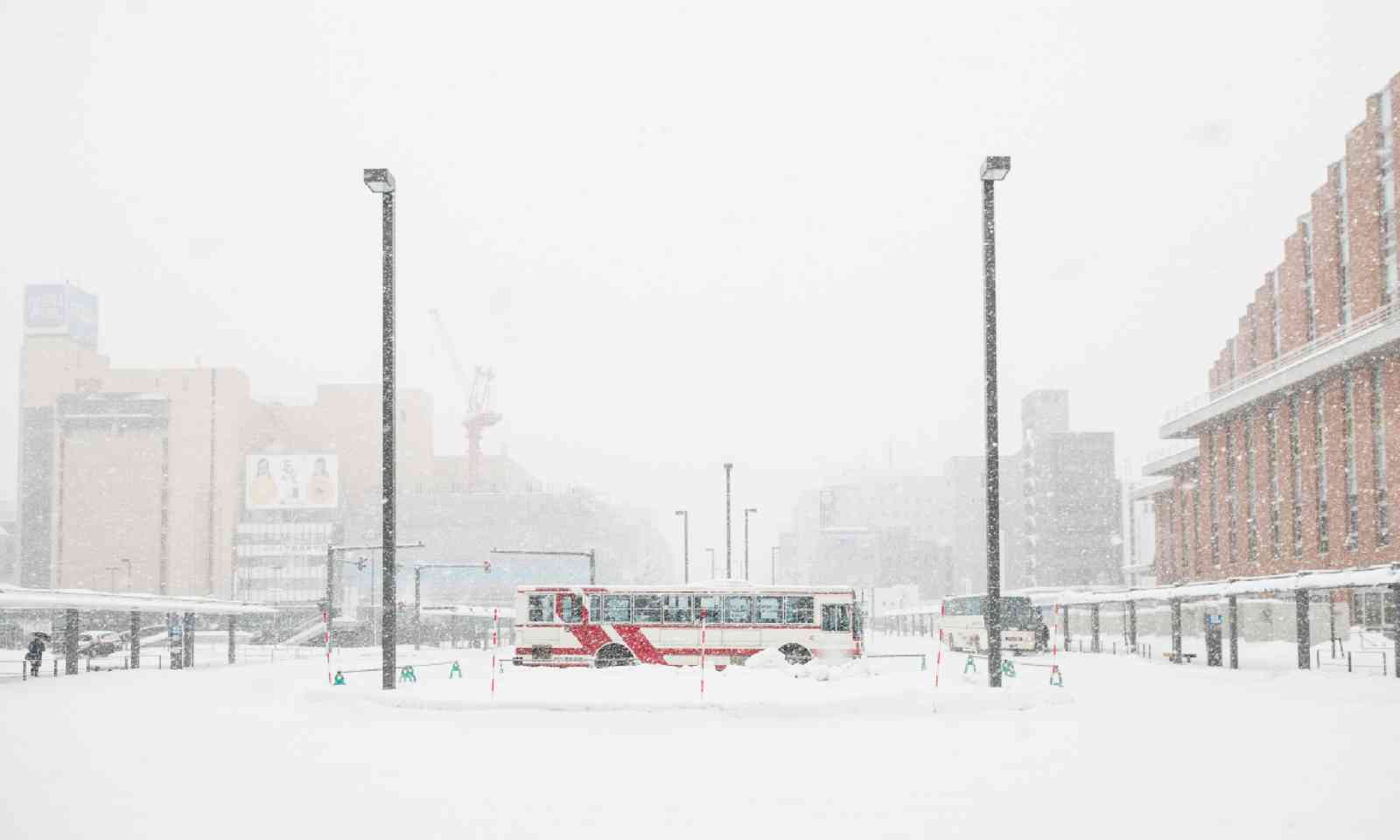 I found the predicament of the Ainu, who claim common heritage with First Nation North Americans painful. On a day when the sun was shining even as, bizarrely, it was still snowing, I caught a bus over to Asahikawa, where some of the last vestiges of the Ainu culture are preserved in a Folk Arts and Crafts Village. I was shown Ainu huts roofed with leaves, musical instruments, handicrafts and century-old photographs of the last true Ainu, by the bearded and tattooed Hiroshi Ashima, who himself is half Ainu.

In truth, however, this is a culture barely existent outside museums – except for the profligate and legendary tanuki (a cross between a badger and racoon). Tanuki statues with fat bellies and swollen testicles are ubiquitous: outside hotels, noodle shops and bars – luring customers inside with a sweeping paw and mischievous grin. I even had a stuffed silk tanuki for company in my traditional ryokan inn.

Here the mystique of time-honoured Japanese ritual began to unfold the moment I swapped my jacket and boots for a midnight-blue kimono and slippers. Yuki, my kind and graceful maid, showed me through a sliding paper door to my room, bare except for the tatami (reed) mats on the floor and the low, lacquer table where later she served my supper. I sat cross-legged on the floor and marvelled at the colour, form and texture of the 12 small dishes set before me – curls of raw fish, crescents of sliced fruit, wafer-thin bread crafted into shapes, red crab claws, cups of green tea…

Later Yuki laid a futon, quilt and rice-husk pillow on the floor, where I slept and dreamed of magical food.

Breakfast was another matter. It started with a raw egg cracked over rice, before salty fish broth and a gooey mush of fermented soya beans. Packed with nutrition no doubt, but a bit beyond what my constitution can take first thing in the morning.

On the way back towards Tokachi-dake I got off at Kamifurano and checked into a simpler, country ryokan on the volcano’s south slope. I strapped on snowshoes and hiked up towards the smouldering volcanic crater whose strands of steam I had watched from Kitanomine while skiing in Furano.

I stumbled into unmarked holes under calf-deep powder in a grove of silver birches, before leaving behind the treeline and climbing through a moonscape of rubble and salt-and-pepper ash to reach the crater. Here, I sat on a warm rock, an eggy smell in my nostrils as sulphur spewed from crumbly pocks tinged green like absinthe. I was mesmerised by the scene and savoured, till the sun began to sink, the sensation of finding myself at one of earth’s extremities. 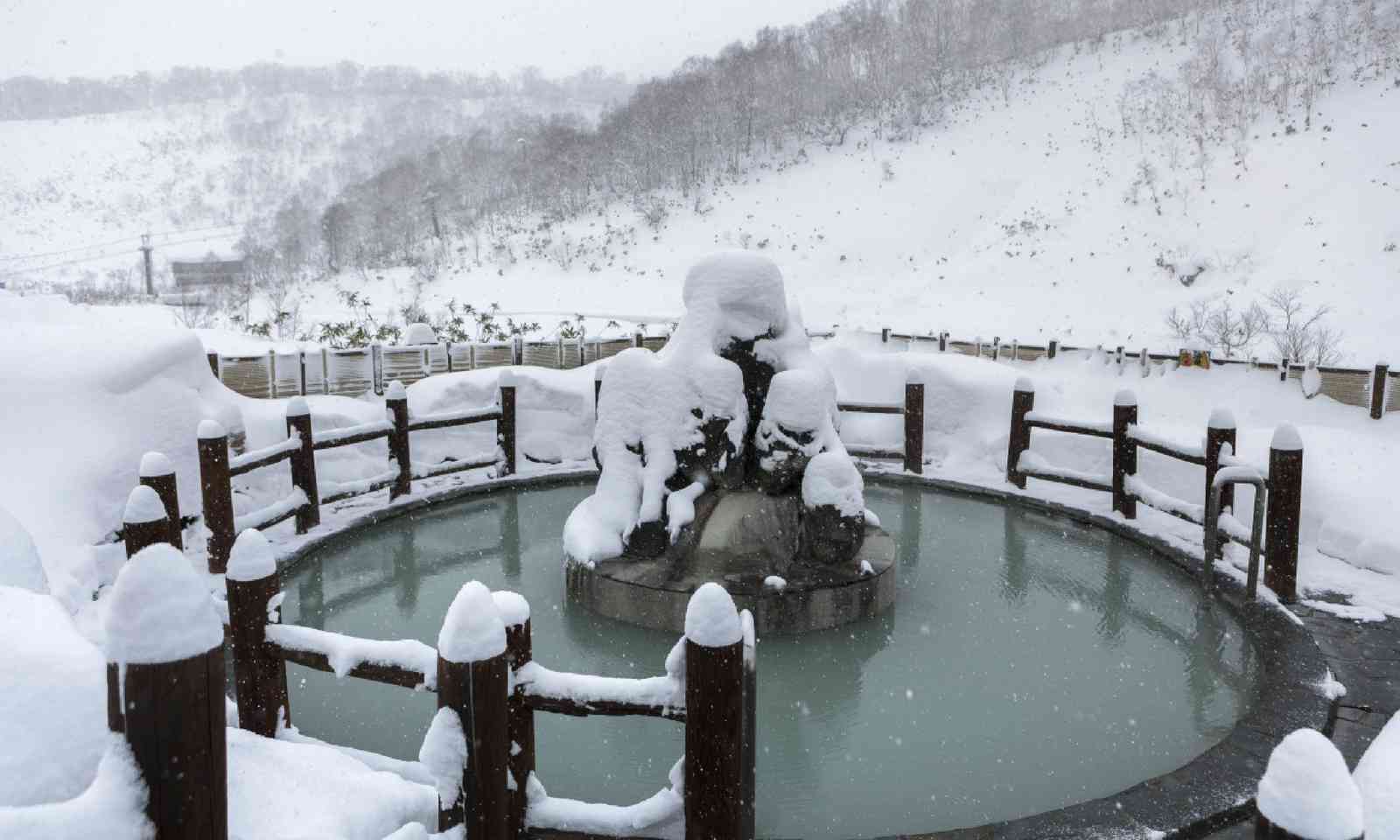 On my descent, I met a few weather-beaten Japanese backcountry skiers, heading for the ryokan with hefty backpacks. For them ‘apres-ski’ was an evening spent in the inn’s onsens (hot springs).

More ritual surrounds the use of these, not least the etiquette of donning kimonos, then slipping them off to walk from pool to pool, naked except for a handkerchief-sized ‘modesty towel’ which I learned to dangle in front of me, fig leaf-style. Over several hours I marinated in steam, showered under magma-heated waterfalls, and languished in the sulphurous, calming waters.

The atmosphere encouraged gentle conversation and long periods of silence, as if the true communing was being done with Toka and her waters.

The night was bitingly cold and crystal clear. Icicles, as thick as a wrist, overhung the scalding onsen. Despite the water’s mineral sting, I felt suffused with health, and in the absence of cloud, moon or artificial light I lay under an astonishing profusion of stars, beaming planets and the silky veil of the Milky Way.

I counted seven meteor streaks within half an hour and was still there at midnight, slowly simmering as I waited for the tanukis to come out to play.