Gallery: Breathtaking images from the Wildlife Photographer of the Year competition

This selection of highly commended images shows why the Natural History Museum’s annual wildlife photography competition is considered the best in the world.

The Natural History Museum in London has just announced the Highly Commended list for its annual Wildlife Photographer of the Year competition.

Now in its 57th year, the competition is an extraordinary showcase for the world’s best nature photography.

The competition is open to both amateurs and professionals alike. This year the museum received over 50,000 entries from 95 countries.

The images are judged anonymously, giving budding photographers a chance to have their work exhibited among the greats.

In fact, many of today's most distinguished conservationists, photographers and filmmakers launched their careers though the competition, including TV presenter Chris Packham who won multiple categories in the mid 1990s.

As this selection of highly commended images shows, the standard of photography continues to be exceptionally high, helping to build a personal connection to the natural world and inspiring people to preserve and protect it. 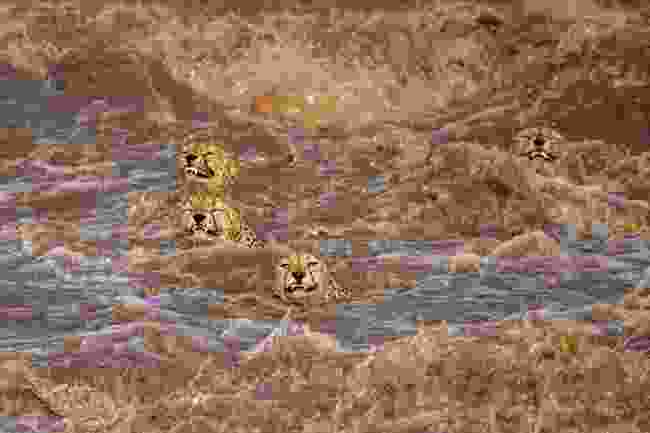 When the Tano Bora coalition of male cheetahs leapt into the raging Talek River in Kenya’s Maasai Mara, Dilini feared they would not make it. Unseasonable, relentless rain (possibly linked to the changing climate) had, by January 2020, caused the worst flooding local elders had ever known.

Cheetahs are strong (if not keen) swimmers, and with the prospect of more prey on the other side of the river, they were determined. Dilini followed them for hours from the opposite bank as they searched for a crossing point.

‘A couple of times the lead cheetah waded into the river, only to turn back,’ says Dilini. Calmer stretches – perhaps with a greater risk of lurking crocodiles – were spurned.

‘Suddenly, the leader jumped in,’ she says. Three followed, and then finally the fifth. Dilini watched them being swept away by the torrents, faces grimacing.

Against her expectations and much to her relief, all five made it. They emerged onto the bank some 100 metres (330 feet) downstream and headed straight off to hunt. 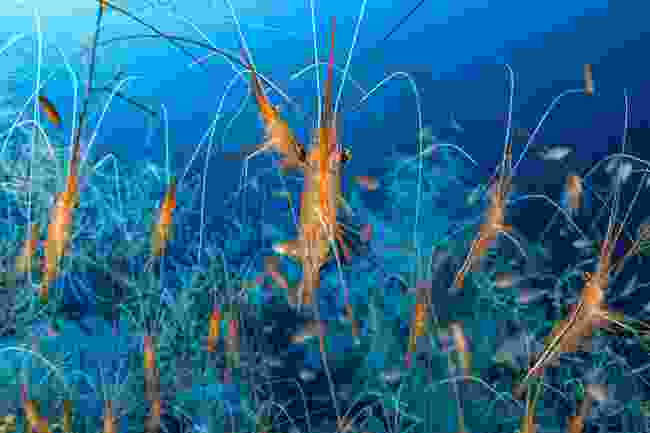 In deep water off the French Mediterranean coast, among cold-water black coral, Laurent came across a surreal sight – a vibrant community of thousands of narwhal shrimps. Their legs weren’t touching, but their exceptionally long, highly mobile outer antennae were.

Against the deep-blue of the open water, floating among the feathery black coral (white when living), the translucent narwhal shrimps looked exceptionally beautiful, with their red and white stripes, long orange legs and sweeping antennae.

Narwhal shrimps are normally nocturnal and often burrow in mud or sand or hide among rocks or in caves in the day, which is where Laurent was more used to seeing them. They are also fished commercially. When shrimp-fishing involves bottom‑trawling over such deep-water locations, it destroys the slow‑growing coral forests as well as their communities.

Lynx on the threshold 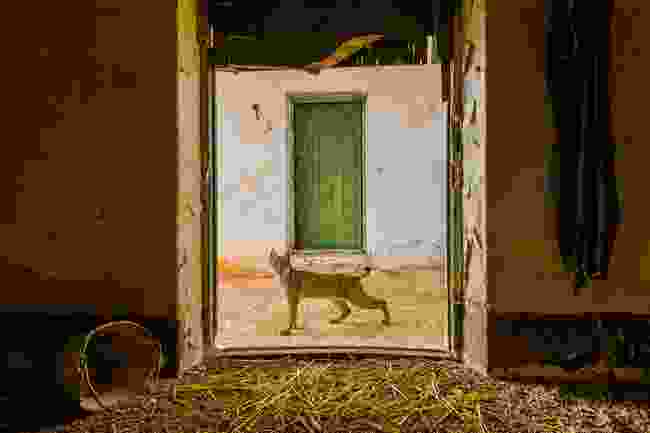 A young Iberian lynx pauses in the doorway of the abandoned hayloft where it was raised, on a farm in eastern Sierra Morena, Spain. Once widespread on the Iberian Peninsula of Spain and Portugal, by 2002 there were fewer than 100 lynx in Spain and none in Portugal. Their decline was driven by hunting, killing by farmers, habitat loss and loss of prey (they eat mainly rabbits).

Thanks to ongoing conservation efforts – reintroduction, rewilding, prey boosting and the creation of natural corridors and tunnels – Iberian lynx have escaped extinction and, though still endangered, are fully protected. Only recently, with numbers increasing, have they begun to take advantage of human environments.

This individual is one of the latest in a family line to emerge from the old hayloft. After months of waiting, Sergio’s carefully-set camera trap finally gave him the picture he wanted. 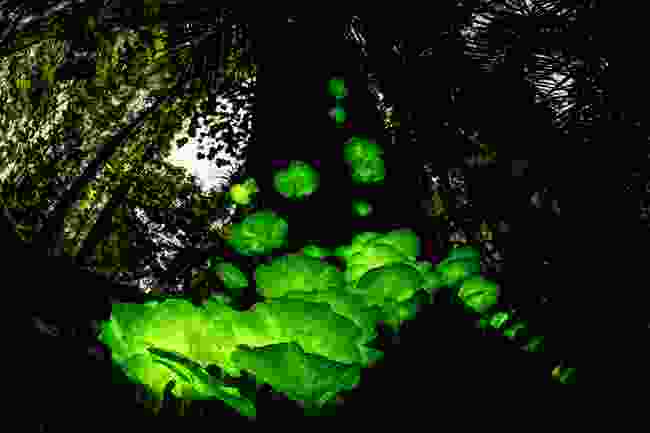 It was on a summer night, at full moon, after monsoon rain, that Juergen found the ghost fungus, on a dead tree in the rainforest near his home in Queensland, Australia.

He needed a torch to keep to the track, but every few metres he would switch it off to scan the dark for the ghostly glow. His reward was this cluster of hand-sized fruiting bodies. Comparatively few species of fungi are known to make light in this way, through a chemical reaction: luciferin oxidizing in contact with the enzyme luciferase.

Why the ghost fungus glows is a mystery. No spore‑dispersing insects seem to be attracted by the light, which is produced constantly and may just be a by-product of the fungi’s metabolism. Juergen crouched on the forest floor for at least 90 minutes to take eight five minute exposures – to capture the dim glow – at different focal points, which were merged (focus stacked), to create one sharp-focus image of the tree-trunk display. 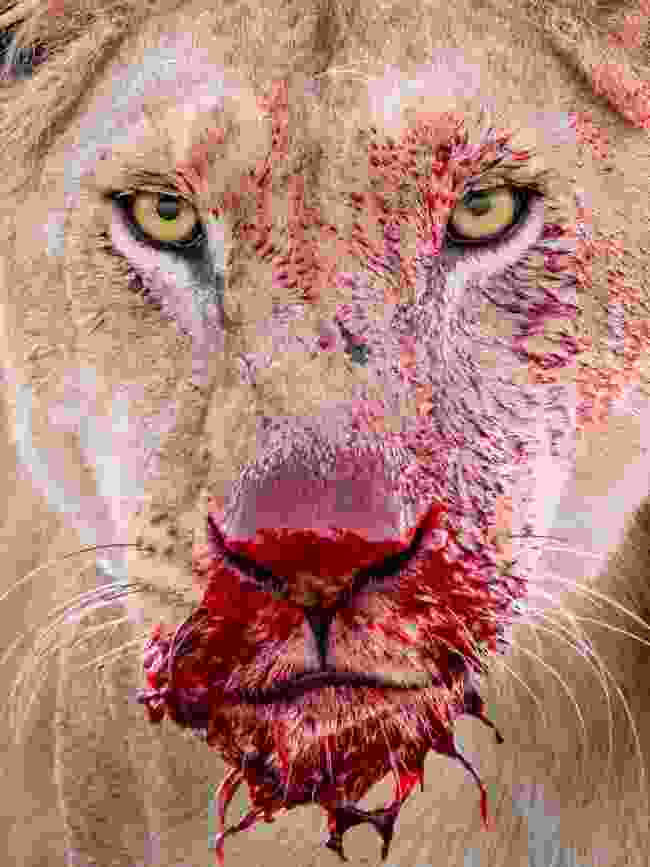 Perhaps being inexperienced, this young lioness had not made a clean kill and had begun eating the still struggling animal. Now, with a paw holding it down, she gave Lara an intense stare.

Lara had spotted the lioness just as she pounced. Lions’ primary hunting strategy is stalking, but this one had just been resting in the long grass, when the wildebeest wandered by.

‘She was already quite full,’ says Lara, ‘probably after feeding the night before, but she grabbed the opportunity for an easy meal.’

Lying in a specially adapted vehicle, with the sides folded down, Lara framed her low-angle close-up. Her arresting portrait captures the rawness of the moment and the intensity of the lioness’s stare. 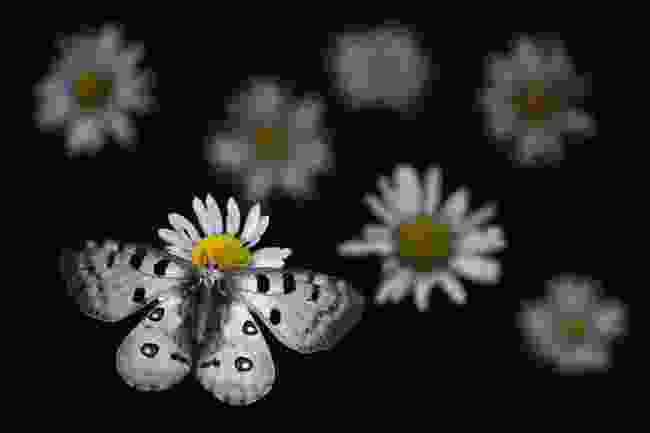 As dusk starts to fall, an Apollo butterfly settles on an oxeye daisy.

Emelin had long dreamed of photographing the Apollo, a large mountain butterfly with a wingspan up to 90 millimetres (31/2 inches) and now one of Europe’s threatened butterflies, at risk from the warming climate and extreme weather events.

In summer, on holiday in the Haut-Jura Regional Nature Park, on the French‑Swiss border, Emelin found himself surrounded by alpine meadows full of butterflies, including Apollos. Though slow flyers, the Apollos were constantly on the move. The solution was this roost, in a woodland clearing, where the butterflies were settling. But a breeze meant the daisies were moving. Also the light was fading.

After numerous adjustments of settings and focus, Emelin finally achieved his emblematic image, the whites standing out in stark contrast, and just daubs of colour – the yellow hearts of the daisies and the red eyespots of the Apollo. 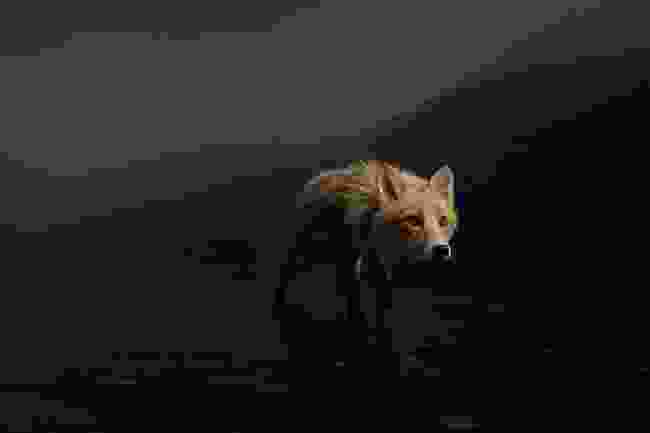 The fox was busy searching in the shallows for salmon carcasses – sockeye salmon that had died after spawning. At the water’s edge, Jonny was lying on his chest, aiming for a low, wide angle.

The vixen was one of only two red foxes resident on the tiny island in Karluk Lake, on Alaska’s Kodiak Island, and she was surprisingly bold. Jonny had followed her over several days, watching her forage for berries, pounce after birds and playfully nip at the heels of a young brown bear.

Taking advantage of the window of deepening atmospheric light created by a storm rolling in, he was after a dramatic portrait. But working with a manual flash, he had to pre set the power for a soft spotlight – just enough to bring out the texture of her coat at relatively close range. As she came closer, his companion and fellow researcher raised up the diffused flash for him. It was just enough to pique her curiosity, giving Jonny his atmospheric portrait – studio-style – moments before the deluge of rain. 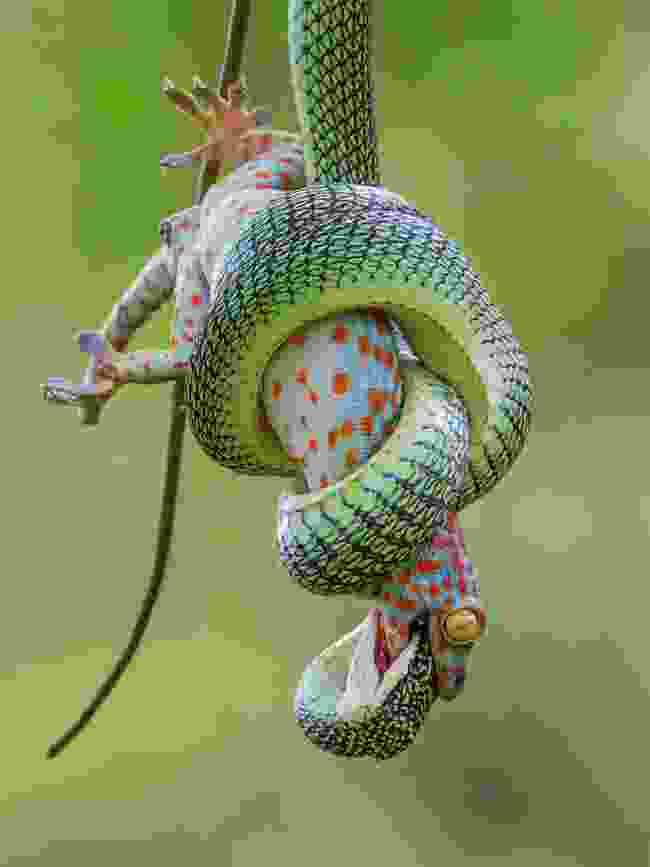 Clutched in the coils of a golden tree snake, a red-spotted tokay gecko stays clamped onto its attacker’s head in a last attempt at defence.

Wei was photographing birds at a park near his home in Bangkok, Thailand, when his attention was caught by the loud croaking and hissing warnings of the gecko. It was being approached by the golden tree snake, coiled on a branch above and slowly letting itself down.

Wei watched as they wrestled, but within minutes, the snake had dislodged the gecko, coiled tightly around it and was squeezing it to death. While still hanging from the loop of its tail, the slender snake then began the laborious process of swallowing the gecko whole. 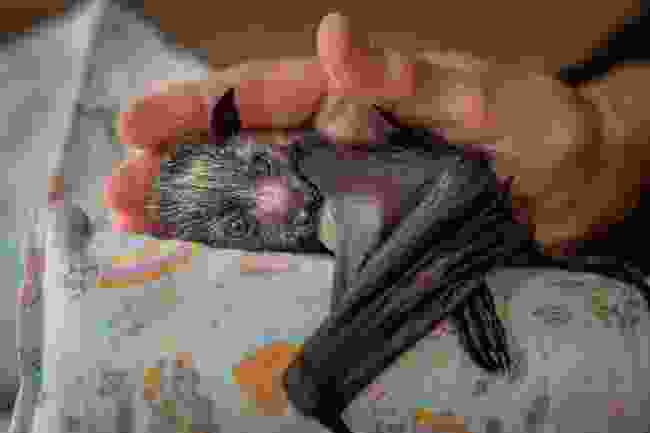 After a feed of special formula milk, an orphaned grey-headed flying-fox pup lies on a ‘mumma roll’, sucking on a dummy and cradled in the hand of wildlife-carer Bev.

She was three weeks old when she was found on the ground in Melbourne, Australia, and taken to a shelter. Grey‑headed flying-foxes, endemic to eastern Australia, are threatened by heat-stress events and destruction of their forest habitat – where they play a key role in seed dispersal and pollination.

They also come into conflict with people, get caught in netting and on barbed wire and electrocuted on power lines. At eight weeks, the pup will be weaned onto fruit, then flowering eucalyptus. After a few months, she will join a crèche and build up flight fitness, before being moved next to Melbourne’s Yarra Bend bat colony, for eventual release into it. 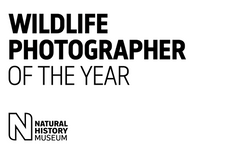 The overall winners of the Wildlife Photographer of the Year competition will be announced on 12 October 2021 via a virtual award ceremony.

The exhibition at the Natural History Museum will begin on 15 October 2021. And entry for next year’s competition opens on 18 October 2021.