Fancy a hearty one-pot recipe that'll warm you from the inside out? Sink your spoon into these stews from Georgia and South Carolina

My friend Wendell David Brock is a magnificently talented cook as well as a fine journalist, so when he invited me over for his mother’s signature Brunswick stew, I replied with a swift and eager “Yes!” – and I loved every bite. Mrs. Brock’s recipe reflects her roots in the state of Georgia, with the inclusion of pork and ground beef, English peas, and creamed corn. 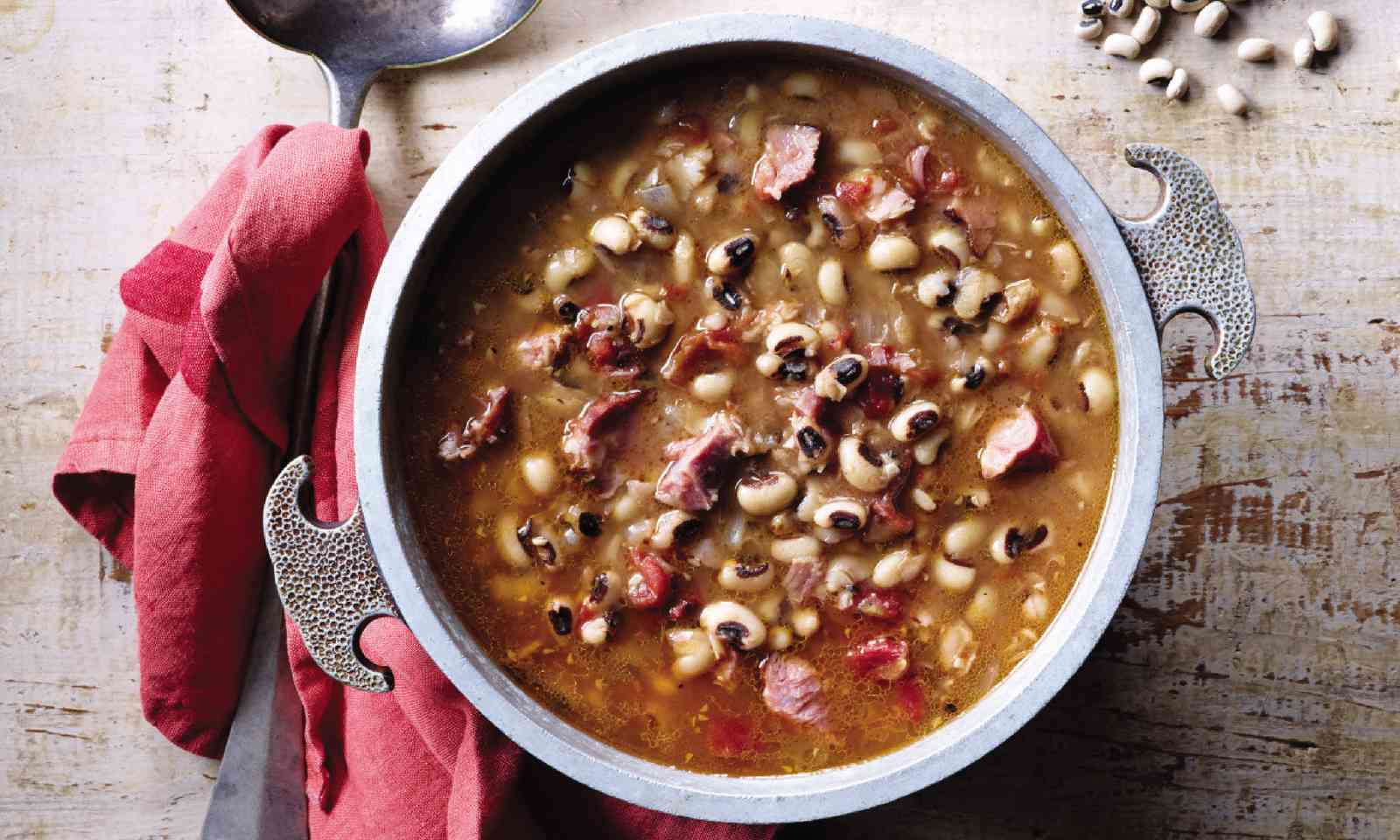 1. Place the pork in a large stockpot or Dutch oven (cut into chunks if need be). Cover the pork with water and bring it to a boil over high heat. Skim off any foam as it rises to the top during the first 15 or 20 minutes. Then lower the heat to maintain a gentle simmer and cook until the meat is tender enough to pull apart using two forks, 2 to 3 hours.

2. When the meat is done, transfer it to a large platter and allow it to cool to room temperature. Pull it apart and chop it roughly into small pieces.

3. While the pork is cooking, heat a large skillet over medium-high heat and add the vegetable oil, swirling to coat the pan. Crumble in the ground beef and turkey and cook them, turning and pressing to cook them evenly. When all the meat is cooked through, remove it from the heat and set aside.

4. In a large Dutch oven or a stockpot, combine the pork, beef, and turkey. Add the whole and chopped tomatoes, barbecue sauce, cream-style and whole-kernel corn, Worcestershire, hot sauce, pepper, and salt. Place the pot over medium heat and bring it to a lively boil, stirring often.

5 When the stew is bubbling hot, lower the heat to maintain a gentle simmer and cook, stirring occasionally, for 1 hour and 15 minutes. Stir and scrape the bottom to prevent the stew from sticking or burning. About 5 minutes before serving time, add the peas to the stew and stir gently to mix them in evenly. Cook the stew for 5 minutes more and serve it hot.

If you ask people where the action is in Horry County, South Carolina, most of the year, they will point you in the direction of the bustling city of Myrtle Beach. If it’s the third weekend in October, though, get them to show you the way to Loris, twenty miles inland and home of the Annual Loris Bog-Off.

Gigantic cast-iron cauldrons and shiny stockpots bubble away, filled with a simple, supremely delicious stew of chicken, onions, smoked sausage, and long-grain rice, simmered into the satisfying stew known as chicken bog. But why is it so named? Because it’s moist and boggy? Because the chicken gets all bogged down in the rice-and-broth goodness? Nobody knows, nor much cares, providing they receive a generous serving. 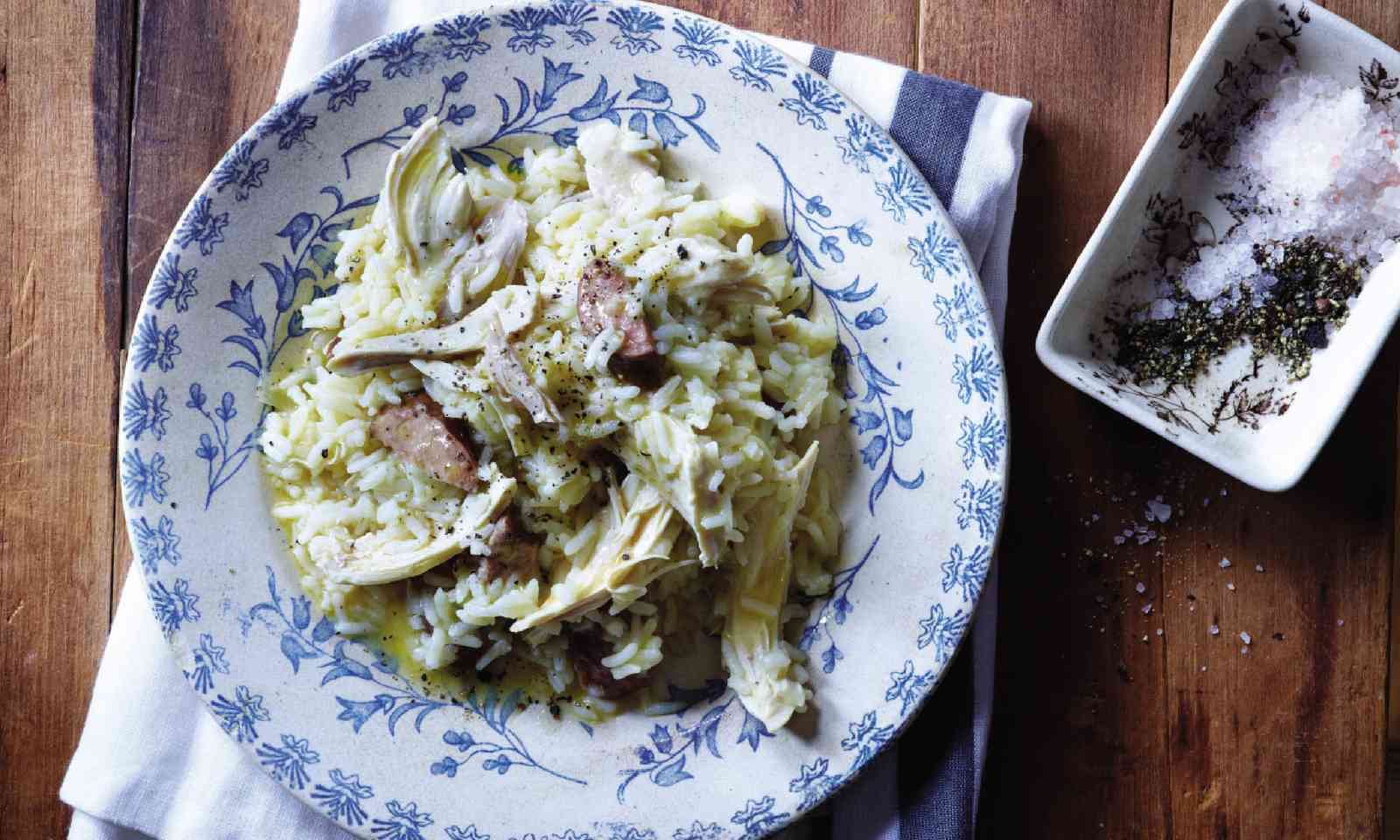 1. Place the chicken in a large Dutch oven or stockpot and add enough water to cover it by 2 inches. Bring it to a rolling boil over medium- high heat. Skim off and discard any foam that rises to the surface. After 10 minutes, when the foam has subsided, lower the heat to maintain a gentle but visible simmer. Cook until the chicken is tender and done to the bone, 45 minutes to 1 hour.

2. Transfer the chicken to a platter or baking pan until it is cool enough to handle. Leave the pot of chicken broth on the stove. When the meat has cooled, pull it from the bones and set it aside, discarding the skin and bones. For the traditional bog, leave the chicken in large chunks. If you wish, chop it into big bite-size pieces.

3. Measure the chicken broth. You should have 6 cups. Add water if needed to make that amount. Return the broth to the cooking pot and add the chicken meat, sausage, rice, onion, salt, and pepper. Place the pot over medium-high heat and bring it to a lively boil.

4. Turn the heat to low and stir once to mix everything together. Continue cooking without stirring, until the rice has absorbed most of the liquid but is still moist, shiny, and tender, 30 to 35 minutes.

5. Remove the pot from heat, add the butter, and stir gently to mix everything together well. Let the bog stand 10 or 15 minutes if possible, to let the flavors settle, and then serve it hot or warm.

Food writer Heather Watkins Jones grew up nourished by the cooking and wisdom of her maternal grandmother, Wilhelmina Toney Watkins, known lovingly as “Mom-Mom.” Heather loves cooking her Mom-Mom’s stew on chilly days for its satisfying flavors, and also for its connections to her family’s roots. 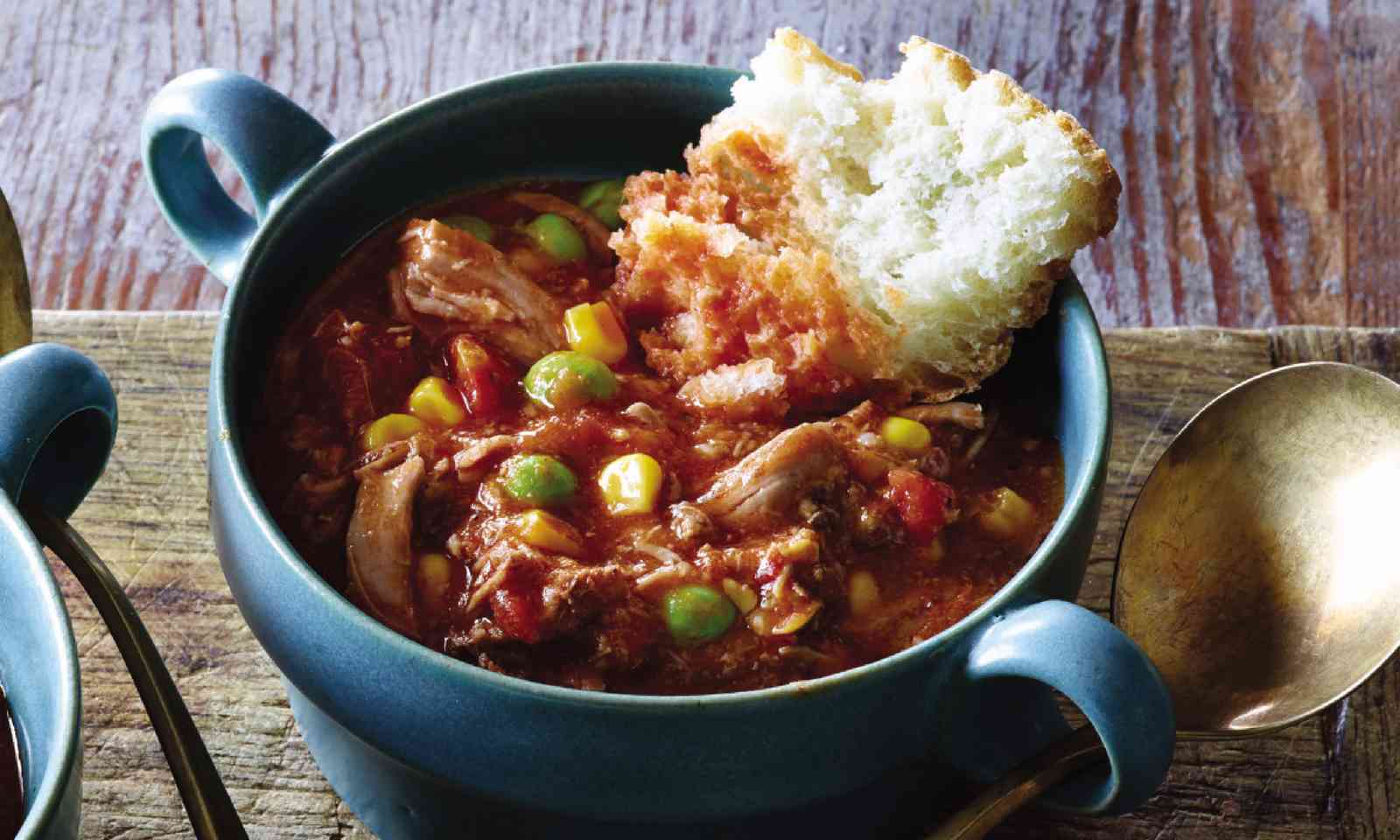 1. In a large Dutch oven or stockpot, heat the vege­table oil over medium-high heat until a bit of onion sizzles at once. Add the onions and cook until they are fragrant, 3 to 4 minutes. Add the ham hocks and garlic, turn the heat to medium, and cook for 5 min­utes more, stirring often so that the onions soften and wilt without much browning.

2. Add the tomatoes and cook, stirring often, for 5 minutes more. Add the stock, black-eyed peas, and 3 cups water. Increase the heat to bring everything to a boil, and stir well. Add the salt and pepper and adjust the heat to maintain a lively simmer.

3. Cover partially and cook, stirring now and then, until the peas are tender, about 2 hours. Remove the ham hocks and set them out on a plate until they are cool enough to handle. Remove the meat, chop it finely, and return it to the pot. Stir well. Serve the stew hot or warm.

These recipes are taken from Southern Soups & Stews by Nancie McDermott (published by Chronicle Books, £15.99). All images © 2015 by Leigh Beisch