With whale watching, hiking, incredible scenery and interesting locals to discover, there's every reason to visit Canada's Gulf Islands. But which ones? Here's our guide to our favourite six...

Our kayaks slipped silently through transparent waters towards the family of sea otters cavorting on the rocks, the two pups playing hide and seek before they slid down to hunt for sea urchins among the kelp beds.

We edged along the shoreline past beaches littered with jumbles of trees, the tell-tale deposits of storms past, their trunks stripped of bark, bleached by the sun and polished smooth by abrasion. Beneath us tiny crabs scuttled over the sandy bed, while bald eagles circled overhead.

I was in Galiano, one of the Southern Gulf Islands lying between the east coast of Vancouver Island and the mainland of British Columbia, Canada. Since my first visit over 20 years ago, I had been drawn back to these oases of tranquillity by their exceptional beauty and the gentle pace of island life.

Here cafés are as much about meeting and talking as sustenance, and every shop is independently owned. Too small for public transport, several islands have a Car Stop scheme where you wait by a sign and the next car along will probably pull up to give you a ride and have a chat. Every meeting turns into a conversation. 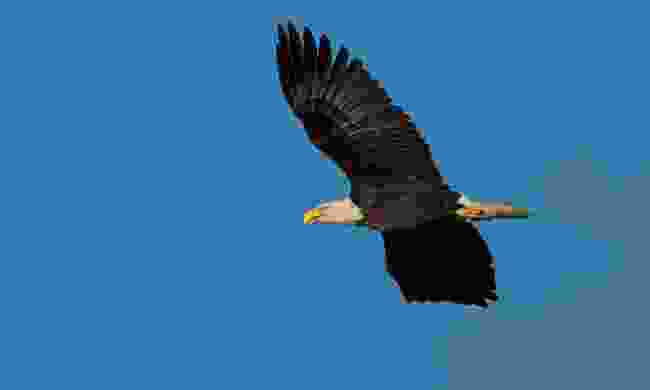 The islands are so peaceful that only Salt Spring and Pender have a police presence, and the most serious incident during my visits was the abduction of the community hall cat on Salt Spring by a well-meaning mainland resident who thought it needed a ‘proper’ home.

There’s not only a strong sense of community but the islanders are proud of the land they live on. In 1948 the Galiano community even pulled together to help buy Bluffs Park, the island’s oldest wilderness park. 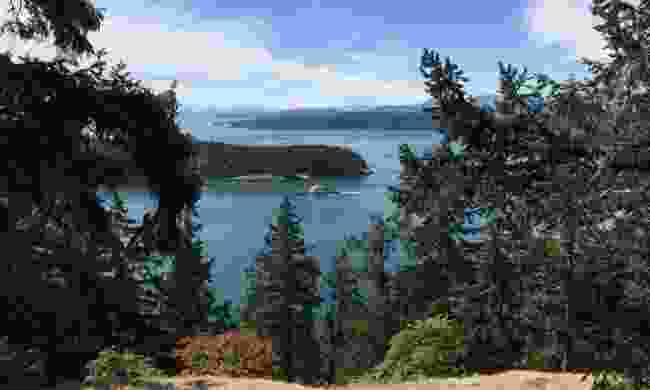 Galiano's viewpoint over the bluffs (Shutterstock)

Walking Galiano’s Sturdies Bay Trail up through forest to one of the islands’ finest viewpoints, the bluffs themselves, I gazed out over the silvery-grey waters of Active Pass and the dark green-black upheavals of the archipelago, like giant whales breaching. Sheltered coves and deep inlets make the islands a paradise for paddleboarders and kayakers. From the water, they resemble eruptions of rock on which the trees elbow one another for every craggy foot of ground.

Nearly all the islands are named after British or Spanish ships, or crew members from exploratory or mapping voyages from the late 18th century. You can understand why they made the journey. The islands are not only worth the trip for their natural beauty and temperate climate. You can hike through forests, walk along beaches, watch orcas or take in the region’s signature art by wandering through one of its many galleries.

The only question is: which Gulf Island should you visit first? 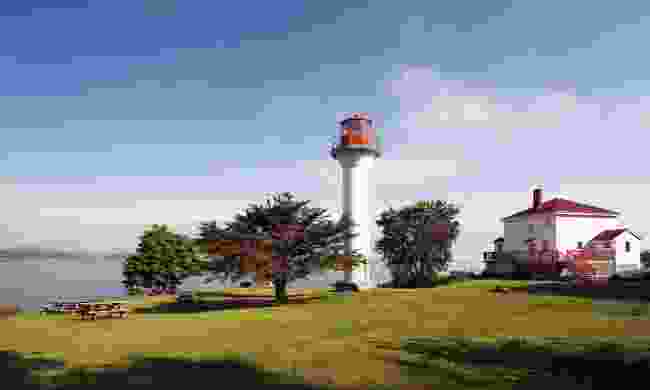 The lighthouse on Maine Island (Shutterstock)

‘A little hell’ is what Mayne used to be called back in 1858, thanks to the behaviour of the prospectors using it as a staging post on their way from Victoria to the Fraser River after gold was discovered. Mayne’s a lot more serene now.

The lock-up that housed miscreants can still be seen opposite the community hall, today housing the island’s museum. The oldest building on the island though is said to be the lighthouse at Georgina Point which, standing 13.7m tall, has been guiding ships through Active Pass since 1885.

A more recent memorial to the island’s history is the Japanese Garden at Dinner Bay Park. This was created in 2002 by the island community to commemorate the part played by the Japanese from 1900 in setting up a herring saltery, orchards and poultry farms as well as producing milk, cream and strawberries. Surrounding a waterfallfed pond large enough to have an island are cherry trees, acers, fuschias, rhododendrons, camellias and irises.

Organic beef, lamb, goats’ milk, chickens, jams and chutneys are produced by the island’s three farms, while a brewery was set up in 2016, now producing a dozen beers. Hiking trails  on the island are limited, but the possibility of several circular routes, some challengingly hilly, makes it popular with cyclists.

Visitors to Mayne will f­ind that beer here is a family business. Mayne Island Brewing’s been making ales since 2016, when it was founded by Annette and Cheshire-born Michael, who worked in the wine trade before deciding it was time to slow down in the Gulf Islands.

Michael’s success with home brewing spawned the idea of going pro with it – and their whole brood’s involved too. Michael looks after the brewing, artist Annette designs the labels, 14-year-old Grace hand labels the bottles, while 16-year-old Jasper runs the bottle line.

You can arrange a visit and enjoy the gong-bagging Barrel Aged Brown for yourself. Bottoms up. 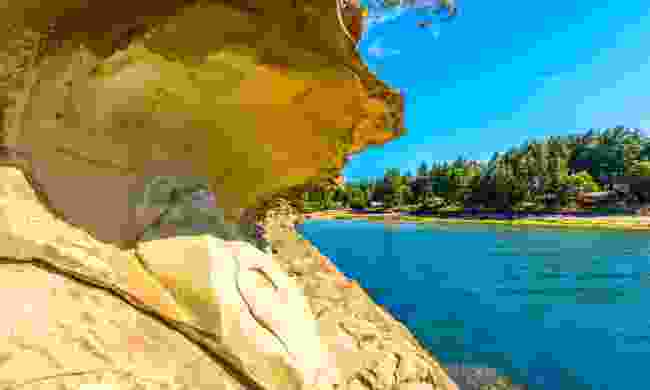 Gabriola seems have always attracted artists. Visitors can seek out some of the 100 or so (rapidly eroding) petroglyphs – some 3,000 years old – carved into its sandstone rock faces. The 4,000 current residents of the ‘Isle of Arts’ continue to sustain a vibrant creative life, with arts and theatre festivals, and during Thanksgiving over 50 artists open their studios to visitors.

That sandstone was also central to the economy. Gabriola was one of the few Gulf islands to have industries, with a brickworks and sandstone quarries supplying Victoria and Vancouver. Millstones cut from the sandstone were once sent as far afield as Finland for use in paper mills, but those quarries have long fallen into disuse. Visit Gabriola Museum to learn more about the area’s history.

Cyclists favour Gabriola for its 30km island loop – none of the other islands have such an extensive circuit – and it is particularly rich in wildlife, with over 250 species to be seen. Its reefs also offer some of the best marine life diving on the British Columbian coast. 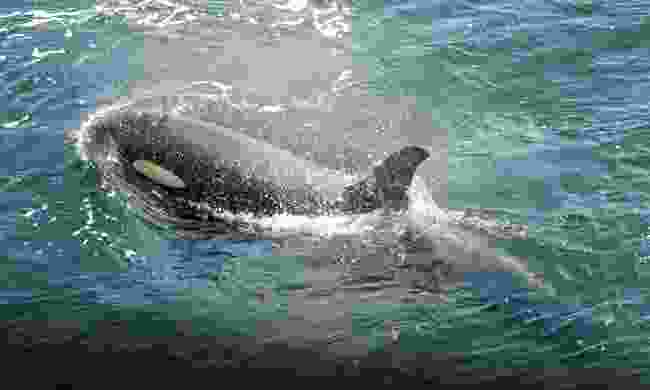 Pender Island is famous for its orcas (Shutterstock)

Linked by a short wooden trestle bridge, North and South Pender offer around 67 trails – some challenging if short, such as the climb to the 244m summit of Mount Norman. It has the most public beach access points of any of the islands, making it a hotspot for outdoor getaways. Orcas are often spotted in the archipelago, and one of the best viewpoints is Thieves Bay on Swanson Channel.

The first settler of European descent arrived here in 1886, and the pioneer homestead of Roe House at Roesland has become the island’s museum. It’s a fine example of early log construction, in a glorious waterfront setting.

Over two dozen galleries welcome visitors, and the Community Hall hosts a farmers’ and arts and crafts market on Saturday mornings. Don’t miss the bakery and café – a hub of island life – at the Driftwood Centre. 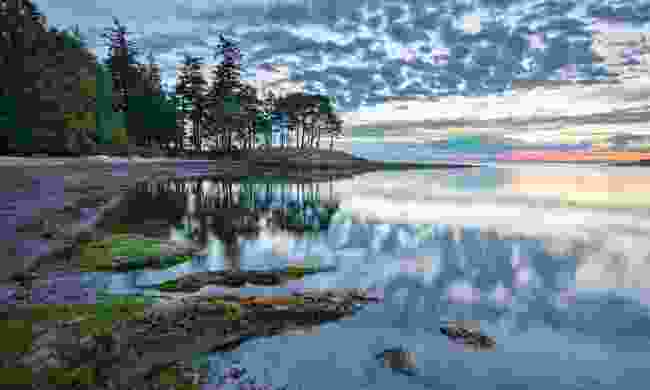 Long, narrow Galiano isn’t just one of the most attractive islands off the Lower Mainland but, rather conveniently, it’s also the easiest to reach too.

It boasts the most hours of sunshine among the islands, which gives you more time to enjoy the forests of Garry oak, maple, cedar and Douglas fir. Even on a wet day, Montague Harbour is an idyllic place to while away the hours, with wraiths of mist rising from the dark conifers, a pair of geese honking as they skim the sheltered bay, and the pungent smell of seaweed and kelp.

Close by is the white shell beach at Oceanview, one of many similar shell midden deposits on the Gulf Islands, the remnants of Coast Salish villages over the last 3,500 years. Near Spotlight Cove are strangely eroded sandstone forms, creating caves and ‘windows’ in the rock.

The highest point on the island is Mount Galiano at 311m, one of several preserves held in trust by the Galiano Club and reached by four different trails. Walking them, one appreciates why the majestic western red cedar was chosen as the symbol tree of British Columbia.

When hungry, stop by the Max and Moritz Spicy Island Food House, a truck that serves an eclectic mix of German and Indonesian takeaway next to the ferry dock.

Do you think monitoring orca sounds like a pretty wonderful use of your time? Well, Rachelle thinks so too, doing part-time work on behalf of the Salish Sea Orca Squad (look them up on YouTube).

This, though, is just one of her jobs here: she works a few days a week in the bakery, does some remote PR work, and has set up Tour Galiano to guide visitors around the island.

Ironically, Rachelle and her husband moved to Galiano in order to drop down a gear or two – a common story around here – but have taken to island life with understandable gusto. 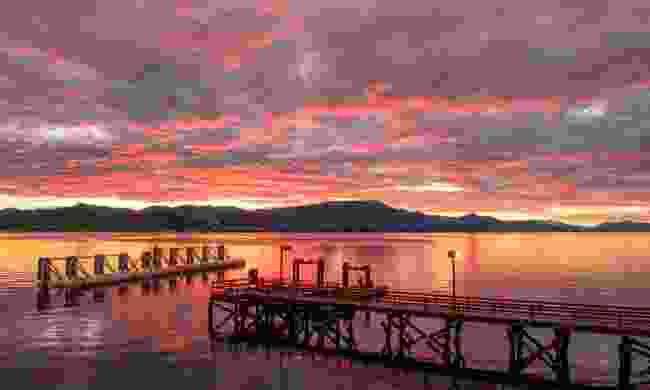 Salt Spring is the largest and most populous of the Gulf Islands with over 10,000 residents. The island has far more agriculture and open fields than any of the other islands, with over 200 working farms.

Salt Spring is also renowned for its artisan food producers, and visitors are well recommended to try their wares. There’s a Tuesday farmers’ market from June to October, and over a dozen restaurants serving local food. Salt Spring lamb is renowned in Vancouver restaurants, and there are over 450 varieties of apple trees growing, some feeding a cidery; there are artisan vodkas and gins as well as two wineries to try.

Visit the Saturday market at the island capital of Ganges for a vivid sense of the Gulf Islands’ reputation for attracting creatives; it’s a condition that everything on sale at the market is made or grown on the island, and you’ll find potters, jewellers, woodworkers, glassblowers, weavers, artists and organic food producers by the dozen. 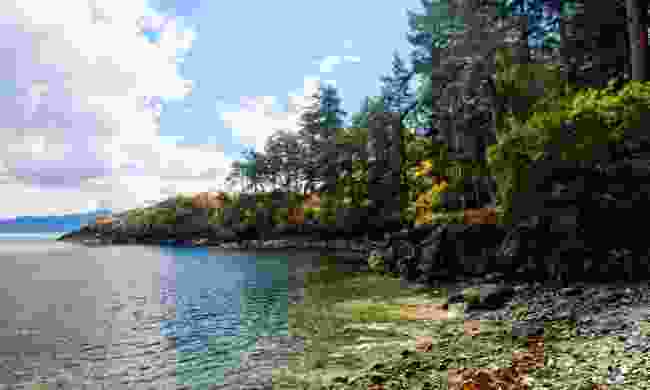 Sadly, you can’t visit the salt springs that gave the island its name – they’re on private property at the north end of the island – but there are enough walks to entice people away from satisfying their tastebuds.

Ruckle Provincial Park is one of a number of reserves that offer hiking trails beside the coast or up the island’s seven peaks – keep an eye out for otters on the shoreline and cormorants, guillemots and eagles in the trees.

Or, if you feel like relaxing, head to Vesuvius Beach on the north-west coast for the warmest swimming waters. Walking along the shores of Saturna Island (Shutterstock) With a population of just 350, Saturna is the most easterly and heavily protected of the Gulf Islands, which explains why it’s also probably the least spoiled. To keep it that way, around half of its fabulously forested land has been placed in the Gulf Islands National Park Reserve.

Within this is Mount Warburton Pike, a 401m peak named after an early settler from Dorset who was the first to write travelogues on northern Canada; it offers a near 180-degree panorama over Plumper Sound to Pender and Vancouver islands.

Not to be missed is East Point where orca pods pass almost daily in summer, and sea lions and seals are nearly always basking on a small island just off the headland. Close by is the restored fog alarm building with a historical display open at weekends.

To its south is another promontory reached by an enchanting walk, descending gently through trees to Echo Bay and Monarch Head with a view over Boundary Pass and a whale route. The Lighthouse pub beside the Village Bay dock is the perfect place to rest while waiting for the ferry, having two ocean-view patios.

Check out our full travel guide to Canada