Stretching along the east coast of Australia, the Great Barrier Reef is a glorious chain of coral, rainforest and lush islands. Here's how to explore it all...

The water was as warm as my own blood. Before me, a tornado of life and death: bluefin trevally tore into their prey, resulting in an explosion of a thousand silver splinters as the bait fish surged and shattered before them. Beneath it all lay a shadow on the seafloor, the wreck of the SS Yongala, said by many to be the greatest wildlife shipwreck on earth.

The Great Barrier Reef ecosystem lends itself naturally to superlatives, although perhaps the best way to describe it is to simply let the data do the talking. It extends for 2,300km north to south, made-up of at least 2,900 individual coral reefs. It is peppered with 600 or so islands, as well as 300 cays. It is estimated that 10% of all the world’s coral is here. 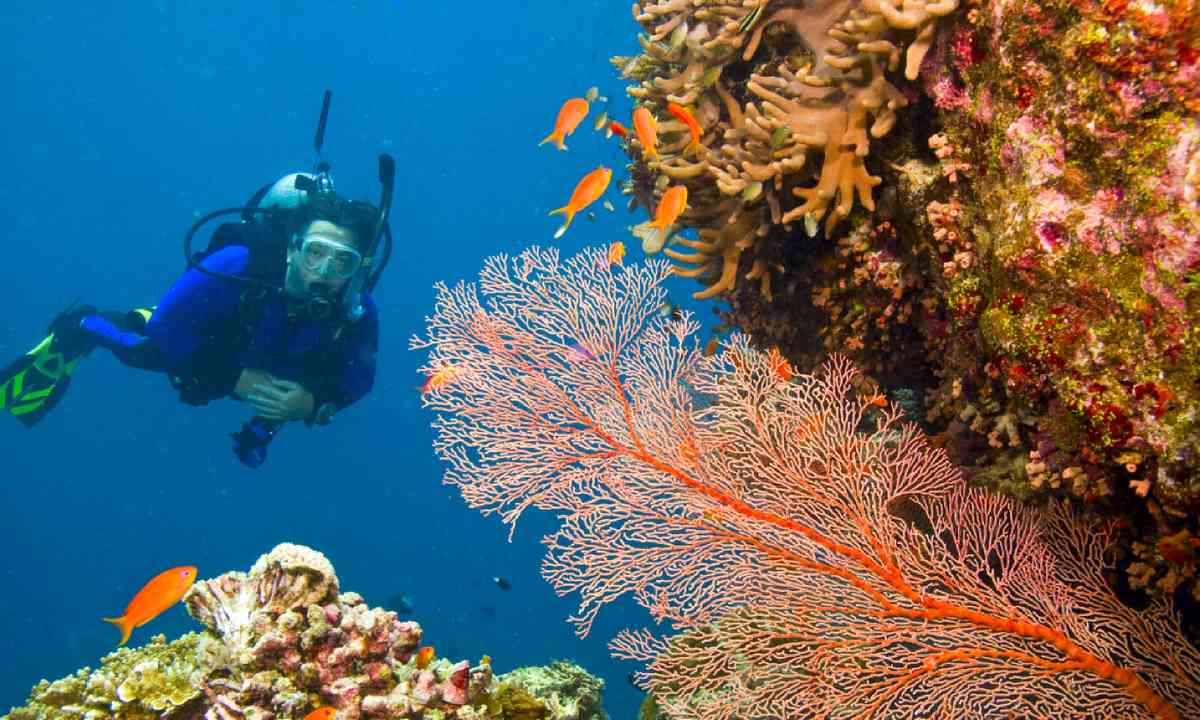 The building blocks of the Reef – the largest natural structure on earth – are 400 species of hard coral. Filling every evolutionary niche, nook and cranny are around 1,600 fish species, 1,300 species of crustacean, 134 species of shark and 3,000 types of molluscs. There are even 14 species of sea snake.

But the real joy of the Great Barrier Reef Marine Park – all 350,000 sq km of it, the largest on earth – is that most of it isn’t reef at all. Only 7% of the park and protected area is coral. The bigger picture sees the oldest rainforest on earth lead to mangrove swamps and beaches, before a truly immense lagoon dotted with islands, and then that final, triumphant note that is the reef itself.

Covering an area of 9,000 sq km, the Queensland rainforest is the oldest continually surviving rainforest on earth. It’s home to thousands of plant species (3,000 is a conservative estimate), and large percentages of endemic Australian birds, mammals, reptiles, freshwater fish and amphibians. Ferns feather the undergrowth, vines and creepers festoon mighty trunks, frogs and butterflies linger on gigantic leaves, the canopy is raucous. 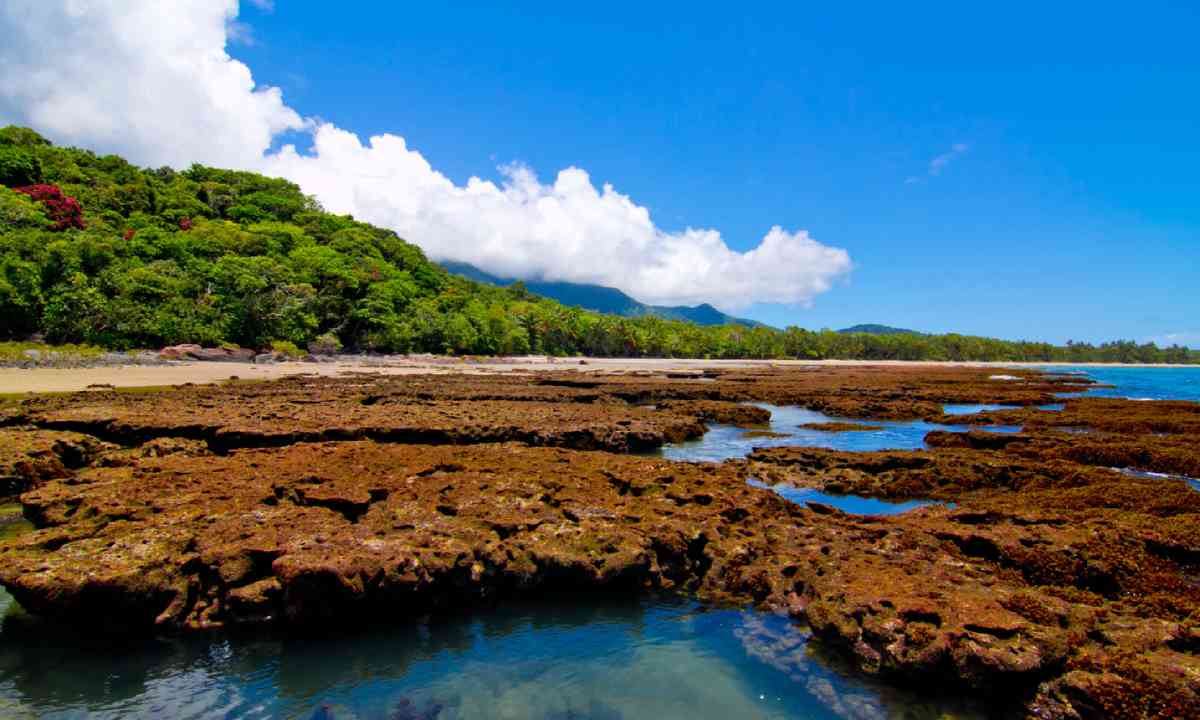 At 1,200 sq km, Daintree National Park is the largest unbroken block of rainforest in Australia. Start at Mossman Gorge, a rocky valley with relatively easy walking tracks and cool pools to dip in; learn more on a guided walk with an indigenous guide. At Cape Tribulation, further north, the forest falls right into the sea; this is the spot to kayak the headland, take bush walks and snorkel the Mackay and Undine Reefs, just offshore.

East Coast Australia has onshore style for all tastes

As the launching point for the Great Barrier Reef, the Queensland coast offers genuine variety – in both experiences and tastefulness. Brisbane is the state’s southern hub. Although the reef begins 360km further north, off Bundaberg, it’s worth lingering on the shoreline between the two. 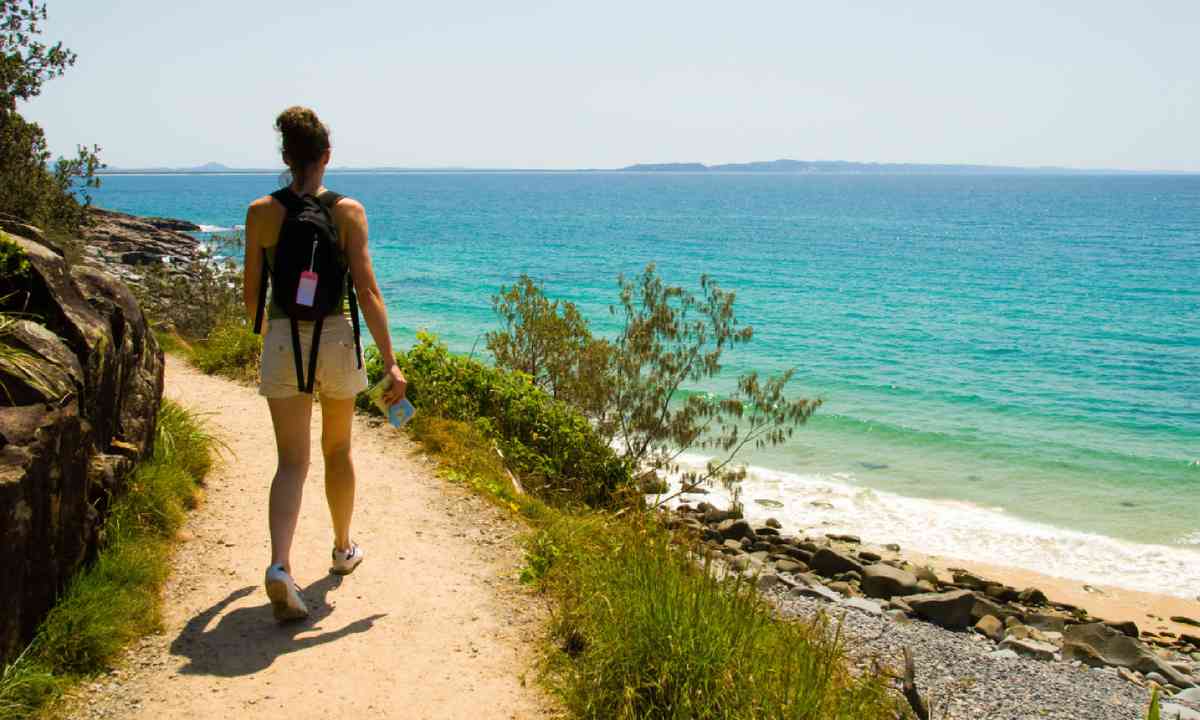 Far less brash and garish than the infamous Gold Coast (south of Brisbane), the Sunshine Coast to the north of the city is a laidback stretch of golden sands and small towns. Here you’ll find Noosa National Park, which occupies a beautiful headland; the town of Noosa is full of cool cafés and cooler surfers.

Purists would say you only really experience the reef by staying on one of its offshore islands. And while there are plenty to choose from – 600 to 2,000, depending on your source – only 20 or so cater for tourists.

The biggest – indeed, the largest sand island on earth – is 1,840 sq km Fraser Island. Just south of the reef proper, this Unesco-listed site has it all: lakes, rainforest, sandstone pinnacles, river valleys, dunes, a 120km-long beach. Hike the 90km Great Walk, which delves into the island’s interior, or hire a 4WD to explore – drive on the beaches and park up at sites such as Lake Wabby, Eli Creek and Lake Mckenzie. 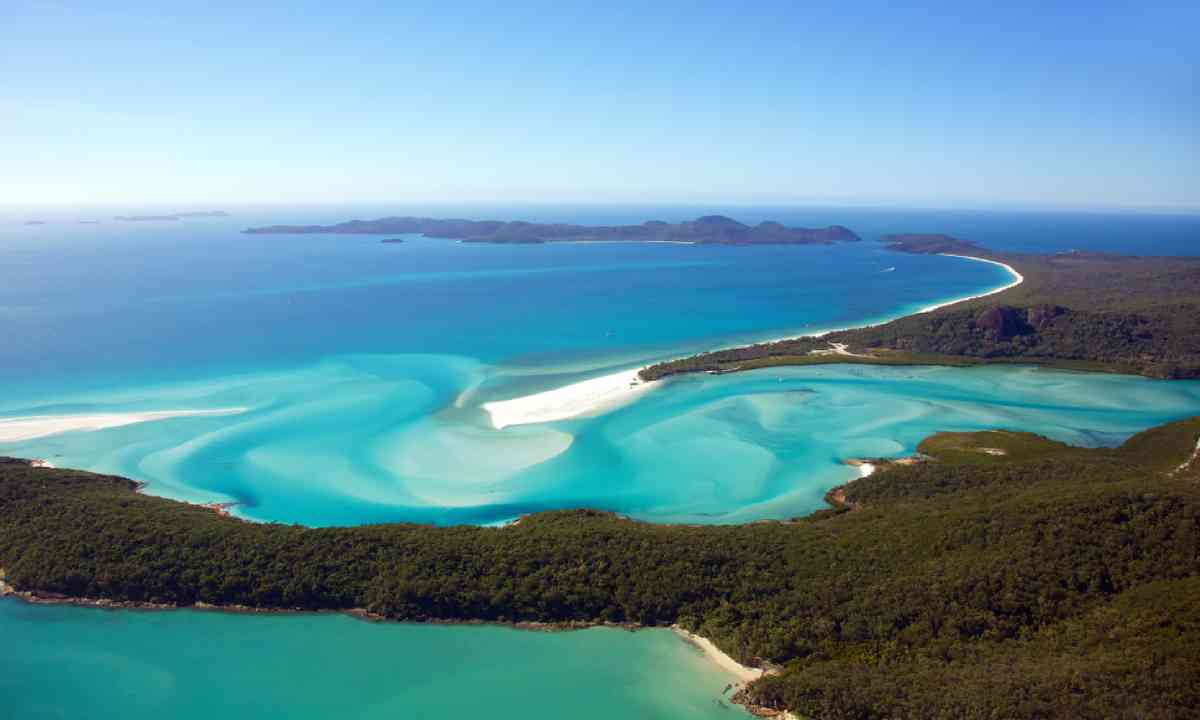 The 74 Whitsunday Islands comprise one of the most beautiful archipelagos on earth. They remain relatively unsullied: 66 of the islands are uninhabited. The islands that do cater for travellers offer a full spectrum of accommodation options, from the five-star luxury of Hayman Island to the bustle of well-developed Hamilton and the campsites of Whitsunday (home to postcard-perfect Whitehaven Beach). Adventures include seaplane flights, diving, whalewatching, trekking and sailing.

The coral comes in many formations, and offers endless underwater possibilities

There is a bewildering array of options for those wishing to explore the Great Barrier Reef itself. This 2,300km stretch of coral tracks the coast, sometimes within a few kilometres but sometimes as far as 200km offshore – accessing it can require a hefty boat journey. Indeed the lagoon between the coast and the reef is huge – covering an area about one and half times the size of Great Britain.

Those short on time can take day trips from the mainland. You’ll be limited to the more-visited, less-pristine inner reefs, but should still see plenty of marine life.
Cairns and Port Douglas, where the reef is close to shore, are good places for quick excursions. 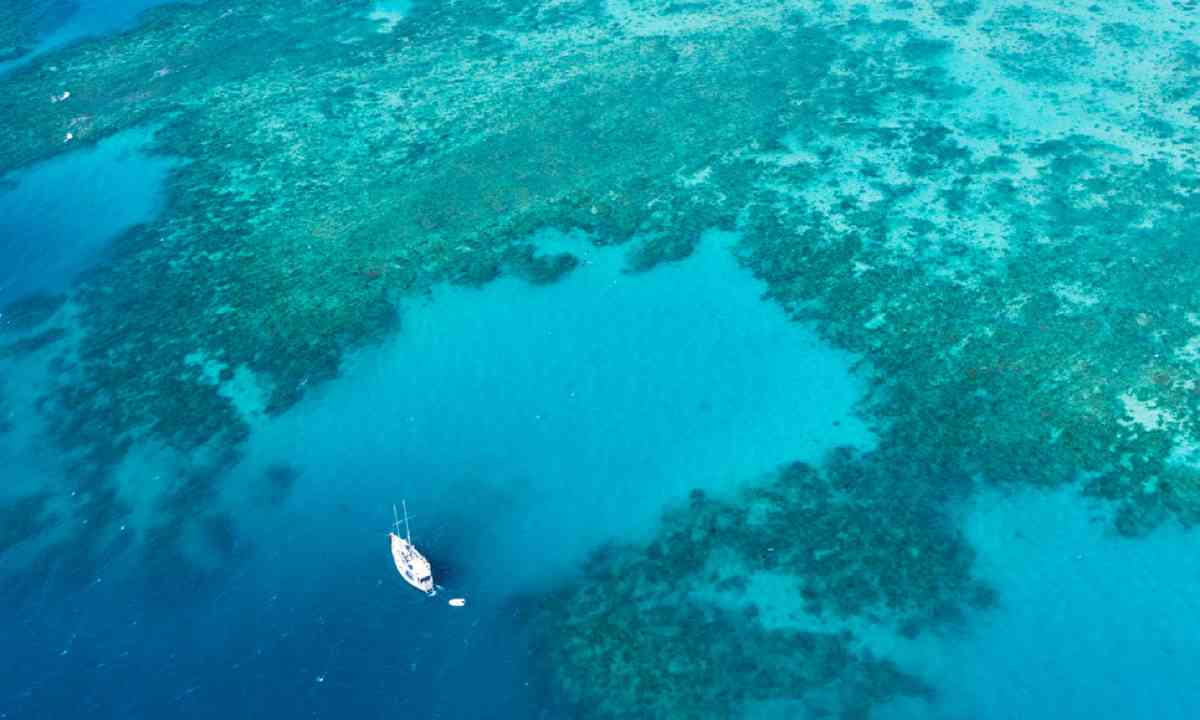 From Cairns, Moore, Norman, Hardy, Saxon and Arlington Reefs are all within a 90-minute boat trip. From Port Douglas you can easily access Split Bommie, Barracuda Pass and the Cathedrals – suitably evocative names that speak volumes about these fine diving sites.

Airlie Beach and the Whitsundays offer good access to the inner reef, with trips for all budgets. Hook Island has some of the best dive and snorkel sites.

For the most pristine and extreme sub-aqua encounters, venture far offshore

The real magic of the GBR lies beyond the influence of the mainland, where the Outer Reef meanders through a wide blue sea.

Forming the reef system’s outer edge off northern Queensland, the Ribbon Reefs are 50-100km offshore and offer outstanding diving. At Ribbon Reef 10 is Cod Hole, so called because of the large potato cod that approach divers. 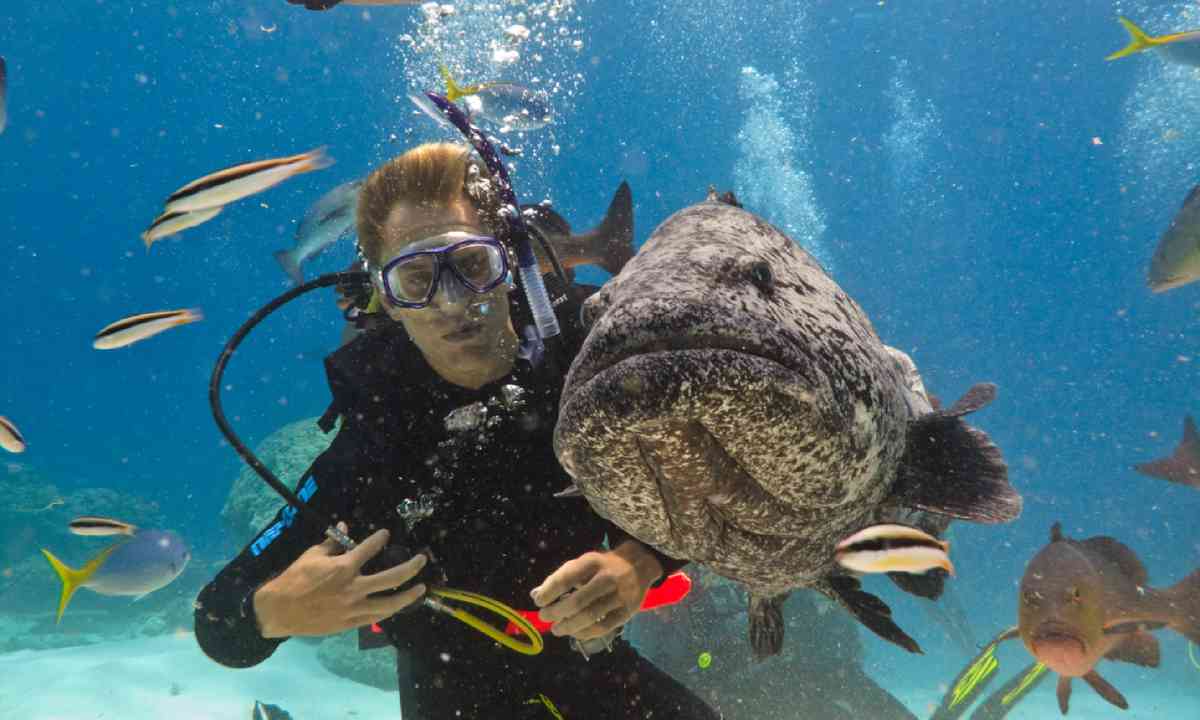 In June and July, the Ribbon Reef Lighthouse Bommie is the site of one of the GBR’s most special encounters. Juvenile dwarf minke whales approach snorkellers hanging on a rope at the stern of a boat. This is not whalewatching, it’s people watching: the whales are completely in control.

Liveaboard trips can also be arranged from other locations, including Airlie Beach, where fast boats zip past the Whitsundays to access the Outer Reef, and Townsville, for overnighters on Kelso Reef and the Yongala.

The grandeur and diversity of the reef belie the fact that this is a delicate and vulnerable ecosystem. Scientists are unanimous that the existence of the entire reef is under threat from factors such as climate change and ocean acidification – global-scale issues that are affecting coral reefs worldwide.

As a visitor it is imperative that you adhere to local conservation regulations and do everything you can to minimise your personal impact on the reef. Guidelines and advice on how to do this are available throughout the Great Barrier Reef Marine Park; penalties for contravening the rules are justifiably severe. 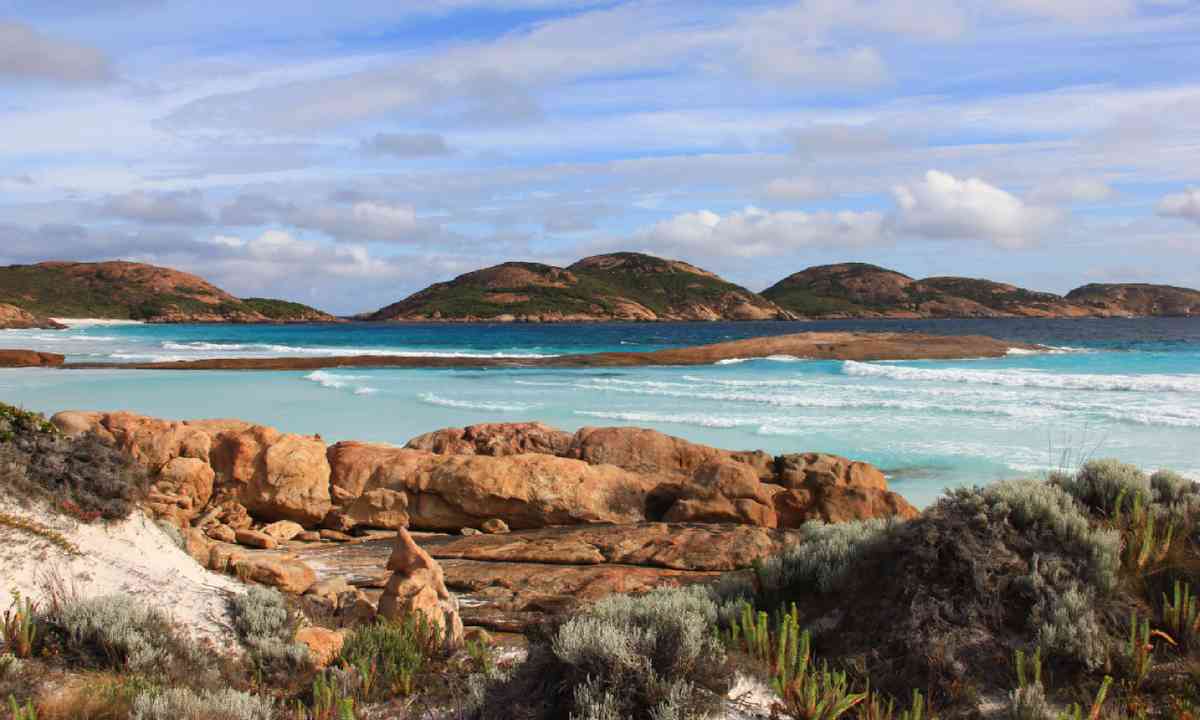 Ribbon Reefs These shallow, narrow stretches of coral, north of Cairns, can only be accessed by liveaboard dive boat – but the underwater action is worth the effort.
Daintree National Park Extraordinarily ancient rainforest; cruise its rivers to look for saltwater crocs.
Cape Tribulation Rainforest meets reef at this verdant hideaway. Activities abound, including kayaking with turtles and galloping along the beach on horseback.
SS Yongala World-class wreck dive, where sea life abounds, easily accessible on a fast day-boat from Townsville.
Hinchinbrook Island Australia’s largest national park island, Hinchinbrook is mostly uninhabited and largely pristine.
The Whitsunday Islands Glorious offshore archipelago. Whitehaven Beach, on Whitsunday Island, is picture-postcard perfect; hopping around by boat (from Airlie Beach) is recommended.
Heron Island Lying near the Tropic of Capricorn in the southern reef, Heron is a haven for turtles, and the place to take guided ranger walks.
Fraser Island Technically just south of the GBR, but a gem nonetheless, this huge sand island has lakes to jump in, creeks to float down and dunes to explore.