Known as ‘The Old Way’, the Great British Pilgrimage from Southampton to Canterbury is making a comeback. Phoebe Smith reveals how to enjoy the best bits of the UK's Camino in just three days

The invite was marked ‘BYOB’, but this wasn’t the acronym’s usual meaning. For when you accept the chance to undertake a pilgrimage – specifically a ‘new’ path being resurrected in the UK by the non-profit charity British Pilgrimage Trust (BPT) – it’s more a case of ‘Bring Your Own Beliefs’ (rather than bottle) for a multi-day romp across what I was assured would be heavenly scenery.

“Pilgrimages are not about religion. The origin of the word has been muddled over time,” says BPT co-founder and former wandering minstrel Will Parsons. “It comes from the Latin peregrine (from ‘per agri’, meaning ‘through the fields’) and ‘peregrinus’ (‘stranger’), so everyone is welcome, no matter what they do or don’t believe in.”

“Pilgrimages are not about religion … everyone is welcome, no matter what they do or don’t believe in.”

As a reaction to the growing success of Spain’s famous Camino de Santiago (last year 277,915 pilgrims received their Compostela), the BPT felt it was time Britain brought back its own, after they were made illegal by Henry VIII in 1538. Though there currently is a Pilgrims Way in England’s south-east, taking you from Winchester to Canterbury, it primarily runs alongside main roads – including the M25, M26 and the M20. But this newly proposed pathway offers an alternative, taken from Britain’s oldest map (circa 1360). It connects Southampton to Canterbury and has been christened ‘The Old Way’ by the BPT, who are working to establish it as a more rural, alternative route. In total, it will span 350km, with the eventual aim for it to have its own signage, passports and a Compostela equivalent for finishers. But you don’t have to wait to walk a prime section of it.

Existing footpaths and bridleways already make the route possible; the last piece of the puzzle is simply establishing cheaper and more ‘pilgrim appropriate’ accommodation, such as campsites, hay barns, village halls and even churches. “It’s chicken and egg,” explains Will.“Churches and communities need to see the demand, but we need accommodation to get more people doing it. We are confident we can make it happen.”

If the last few months are anything to go by, then recruiting pilgrims shouldn’t be a problem. To keep up with the growing demand, the BPT has had to double the amount of these kind of weekend pilgrimages. I was joined in Hamstreet in Kent by a total of 34 souls, all ready to walk the last three days of the Old Way to Canterbury with me over the May bank holiday weekend.

Whether cutting through bluebell-filled woods, following an ancient Saxon shoreline – which is now several miles inland – tracing the Royal Military Canal (once built for defence but never needed), summiting neolithic burial mounds, fording pretty Kentish villages, discovering holy wells or nipping in to the odd church for coffee and cake, no matter what you believe in, a walk on the brand new Old Way is distinctly divine. 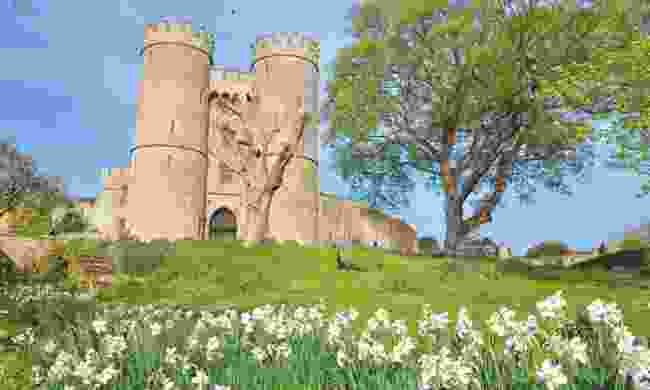 Starting at Ham Street Station, you’ll follow the Saxon Shore Way through a bluebell woodland then pick up another footpath to bring you to Ruckinge and your first church. Note an Ordnance Survey sign – this was the spot where the distance between Greenwich and Paris Observatories was first calculated in 1790.

Leaving the village, head to the Royal Military Canal and follow it east. This was built to defend Romney Marsh from Napoleon’s men in the early 1800s; by the time it was completed the threat of invasion had passed. It now makes a lovely landmark to stroll along to the church at Bilsington (a great picnic spot). Follow the canal before climbing up to the remains of a chapel and holy well, above Marwood Farm, which offers far-reaching views over the marshland and out to France.

Heading downhill, carry on walking east along the canal (look to the left to spot bison, gira e and wild dogs at the Port Lympne Reserve wild animal park), before heading uphill for dinner at The Bistro. End at Saltwood Castle (pictured), where the four knights who killed Thomas Becket set off from in 1170. 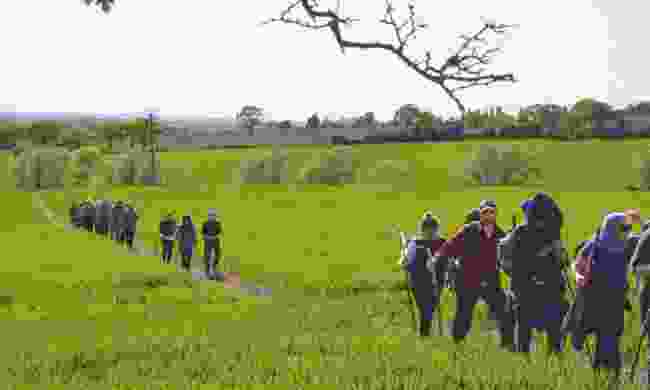 Leaving on the trail of the knights – though without the bloodlust – depart Saltwood heading north to pick up the waymarked Elham Valley Way. You’ll follow the track of a long-dismantled railway line, then cross the M20 and head steadily up onto the North Downs to the flattened summit of Tolsford Hill. Here there’s various tumuli and burial mounds as well as the last views you’ll have of the coast.

Continue on from the summit, past the radio masts and down through Etchinghill, strolling through the greens and browns of agricultural fields and on to the church at Lyminge, which has been there since 633 AD – there’s also a decent village pub here to eat lunch. From here, the path continues heading north, tracing the watercourse of the River Nailbourne. You’ll walk through old Saxon holloways alongside a single avenue of black poplar trees and uphill to the site of another ancient spring on Hall Downs.

As you head up above Wingmore, be sure to detour along the footpath heading east to cut through the wonderfully named Bedlam Wood, then descend Breach Downs into Barham for its Medieval church and your bed for the night. 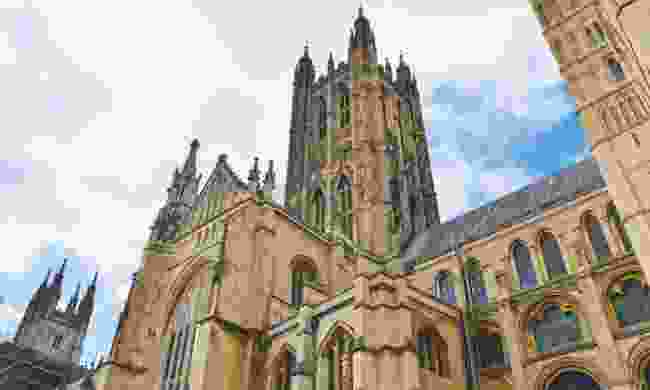 Setting off from Barham (incidentally one of the knights who assassinated Becket lived here), you’ll be heading north-west on the Elham Valley Way. You’ll pass over the remains of another Victorian railway line before reaching the church in the hamlet of Kingston.

Continue on to Bishopsbourne where the 14th-century church is worth a look-in for its wall murals.
It overlooks the green expanse of Bourne Park, which you cross before first heading uphill. Next descend into Bridge where another church awaits, as well as a convenience store ideal for picking up lunch. From there, follow the North Downs Way (crossing the A2 road – the original pilgrimage route from Europe to London) and make a short detour to Bekesbourne, where the church grounds are a fine picnic spot. These lie adjacent to the Old Palace house, once home to Henry VIII’s archbishop Thomas Cranmer and, later, James Bond writer Ian Fleming.

Continue to Canterbury – you’ll start seeing signage bearing pilgrim icons. Stop at the 6th-century St Martin’s church, the oldest in Britain. On your way in, note the tiny spring outside it – the final holy well of this journey. Arrive at the Cathedral in time for Evensong (5.30pm) and the end of your micro-pilgrimage.

The Kent Downs are serene to walk through year round, whether they’re sporting a fresh coat of bluebells in spring orthe crisp hoarfrost of winter.

Hamstreet (one word) and Canterbury are accessible by train. Both connect to Ashford International Station, which has direct links to London, Paris, Brussels and Lille on the Eurostar. A taxi from Canterbury back to Ham Street (two words) station costs around £60 and takes 35 mins. Trains cost from £10 (via Ashford) and take 1 to 1.5 hours.

A pilgrimage is all about going on foot. Local buses are available in some villages but are sporadic. Saltwood and Barham have train stations within walking distance if you wanted to break the route (Hythe and Aylesham respectively). Taxis are available.

The author travelled with the British Pilgrimage Trust. Weekend pilgrimages are held throughout the year and include a host of accommodation in quirky places. This 3-Day Pilgrimage to Canterbury route (prices from £140) included camping in Saltwood Castle and sleeping inside Barham Church.

For those going it alone, there’s a choice of Little Saltwood Farm B&B or the Corner House Lympne at Saltwood on the first night. For later on, The Duke of Cumberland pub in Barham has rooms from £50.

Take a packed lunch for day one, then head for dinner at The Bistro at Lympne Castle. On day two, the Coach & Horses has a carvery en route in Lyminge, then there’s the Duke of Cumberland in Barham.