Walking, whales and waterfront cafes: Rosie Fitzgerald explores the sunny island of Tenerife in between lockdowns

'Wow, was the whole of England on your plane?” asked the airport worker at Tenerife South Airport.

I laughed from under my mask. I was standing in a long queue of socially distanced, last-minute travellers, waiting to get my temperature checked, just days after the Canary Islands were added to the UK’s travel corridor.

On the other side of the airport, I was greeted by blue skies and swaying palm trees. I smiled. Where better to blow away those lockdown blues than in Tenerife, an island popular for its year-round balmy temperatures?

Although it may be the warm weather, sand and sea that attracts so many travellers, there’s much more to do here than lying on a sun lounger.

Despite staying in lively hotspot Costa Adeje, just a 45-minute walk lifted me up in the mountains. Surrounded by lunar landscapes, with the sun sparkling off the blue waters below, there wasn’t a person or hotel in sight.

With a reputed 900km of hiking trails embossing the volcanic island, it’s easy to get off the beaten track here. Head inland to wind up the iconic Teide – the tallest volcano in Spain – or head to Parque Rural de Anaga to stand at the most northerly point of the island, admire the desert-like flora and work your way downhill to a white-washed village, where you’ll have the black-sand beach at the bottom almost to yourself.

More adventures await off land. Brave the waves whipped up on the south-west coast by taking a surfing lesson, or venture further on a whale-watching tour, where sightings of pilot whales are pretty much guaranteed.

All that Atlantic has other pluses too. At the waterfront taverns you can enjoy local favourites vieja (parrotfish) or sardines, or try the traditional rabbit stew, with a side of papas arrugadas – boiled spuds served with a mojo rojo sauce, whose spices often reflect the Canaries’ proximity to Africa.

With all that walking, water and whales, there’s a very good reason why the flights should be full when they start up again. But Tenerife is certainly worth queuing up for.

Walk your way around the island 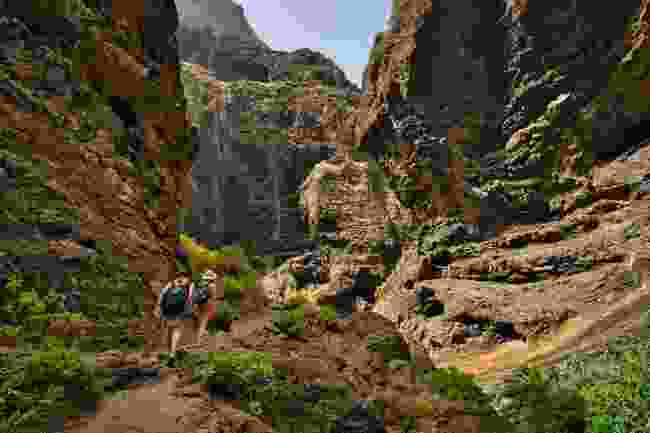 The good news is that walkers are well-catered for, with plenty of signposted trails.

If you’re looking to eye-up the coast, then stretch your legs in Teno Rural Park in the north-west of the island. At over 1,300m, offering up sea views in almost every direction you look. Teno is also popular because of its greenery. You’ll find yourself in thick laurel and giant heather forests. Look out for rare species such as the osprey and the giant Teno lizard.

For a deeper understanding of Tenerife’s explosive past, go on a guided hike up Pico Viejo, the island’s second-highest volcano. Your guides will show you the black lava that scars the landscape, left over from an eruption in 1798. If there are blue skies, you’ll also be able to see some of the smaller islands in the Canaries, including La Palma and La Gomera. 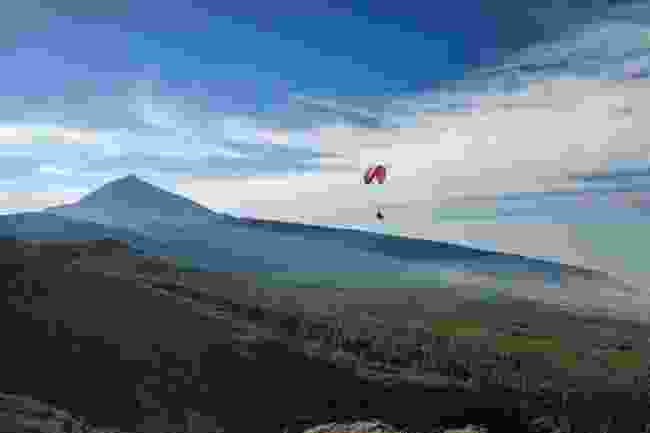 Paragliding You may not think it’s your thing, but watching those kites sailing high up and gently making their way to the coast before touching down on the sand is strangely tempting. If you’re going to try this anywhere, Tenerife makes for an exciting first time.

Stargazing With some of the clearest skies in Europe, head to Teide National Park with a local guide to observe the stars. While the night sky glitters year-round, visit in August to witness the shooting meteor showers of the Perseids.

Whalewatching Head out on one of the many boats departing from the south-west of the island. Pilot whales can be seen year-round. Visit between November and February and you might spot migrating humpbacks, fin whales and even blue whales.

Tenerife has two airports – one in the north and one in the south, so decide where you’re staying before booking your flights. British Airways flies to both from London Heathrow, from £103 return. Flight time is around four and a half hours.