Gilo Cardozo is an aviation engineering specialist and seasoned adventurer.  He flew to a height of 29,494ft over the summit of Mount Everest with TV-survivalist Bear Grylls. His charismatic “let’s just do it” approach to challenges led him to successfully complete an expedition from London to Timbuktu with the world’s first road-legal flying car. He has been awarded the MBE and has now turned his attention to getting more people to fly as a way of getting a different perspective on their travel destinations.

He speaks to Peter Moore about his latest venture – and why everyone should see the world from above.

Can you tell us a bit about Paramotoring?

Paramotoring, or Powered Paragliding, is a rapidly developing recreational sport which is extremely accessible and brings the dream of personal flight to everyone. This is not only because of the simplicity and low cost of entering the sport, but also due to the fact that it is extremely safe and enormously good fun! The paramotor itself consists of a small engine driving a propeller, worn like a backpack, under a paraglider wing that provides thrust to take off, gain altitude and maintain level flight.

What compelled you to get involved?

I have always been fascinated and interested in anything that flies. I saw a photo of a man with a fan on his back and that image really caught my imagination. The sport was still in its infancy but after a bit of research I found out that it was a paramotor and I knew I had to get one. As soon as I strapped it on and took off I was hooked.

What’s the difference between a Parajet and a Parajet SkyRunner?

The Parajet is a foot-launched aircraft that you place on your back combined with a paraglider wing, whereas the Parajet SkyRunner is an evolution of the Parajet propulsion technology combined with an off-road style car. The SkyRunner utilises a specially designed gearbox that allows drive to the wheels to be re-routed to power the propeller when in flight mode.

You’ve tested both in pretty extreme conditions. You flew to the summit of Mount Everest with Bear Grylls with one. And from London to Timbuktu and back via Senegal with the other. What were biggest challenges you faced?

When Bear Grylls and I entered into Mission Everest the odds were very much against us. The conditions were extreme and we only had a four-day window when these would be ideal to fly. The flying and engineering world said we couldn't do it; even getting a paramotor off the ground at 4,500m (14,500ft) was deemed impossible, never mind then climbing to 9,000m (29,500ft). The mission was given less than a 30% chance of success.

The most powerful paramotor engine available at the time was barely producing 30hp and was far too heavy to launch at the desired altitude, so the biggest challenge I faced was designing and manufacturing an engine powerful enough to fly to 30,000ft, yet small and lightweight enough to be worn on the pilot's back and foot-launched at 14,500ft high in the hills beneath Mount Everest.

The answer was to build a revolutionary new rotary engine that produced 100hp, was more compact and 50% lighter than a piston engine equivalent and almost twice the reliable power output for its cubic capacity. After four months of design, development, testing and manufacturing, the engine was finally ready. With just two days before departure, the second engine was completed. Unfortunately, the extreme conditions caused my engine to fail at 28,00ft, but Bear reached 29,500ft and flew over Everest.

For the SkyRunner Expedition, the main challenge was crossing the Sahara, a feat that many find nearly impossible with an off-road vehicle, let alone a flying car. The SkyRunner was virtually an un-tested prototype that we had only flown at low-levels and for a short period of time, so in the vast unpopulated region of the Sahara the risks were not to be underestimated and the team knew that we would be fighting against the elements.

Alongside the inhospitable terrain and challenging weather conditions, we had also been warned about the threat of kidnap in volatile parts of Africa and the possibility of negotiating minefields in Mauritania. It was a really test of endurance both physically and mentally.

What kind of experience do you need to fly these machines? Is it something anyone can do?

Learning to fly a Parajet is quick, easy and safe. Training is progressive and once you have mastered the basic skills, the steps to getting into the air are straightforward. Pilot training takes a minimum of 25 hours spread over several days with the syllabus covering all aspects of flying including equipment, safety, flying theory, navigation, weather and air law.

Parajet offers training courses over six or 12 days run via Europe’s leading paramotoring school. The training takes place in Spain, on a private airfield just 25 minutes from the Costa Brava coastline and just South of the Pyrenees. Alternatively, you can learn to fly your Parajet in the rolling hills of Dorset not far from our factory.

What about the SkyRunner?

Unlike a Parajet paramotor, the SkyRunner requires a license to be able to fly. Parajet will be offering flight training for its customers at affiliated flight schools in the Middle East, Europe and United States. A new pilot needs a minimum of 15 hours flight training plus six hours solo flight time. During this time the pilot will learn the basic skills under the supervision of an instructor before jumping into the SkyRunner. The pilot will complete a number of take offs and landings and pass a General Skills test and complete navigation training. 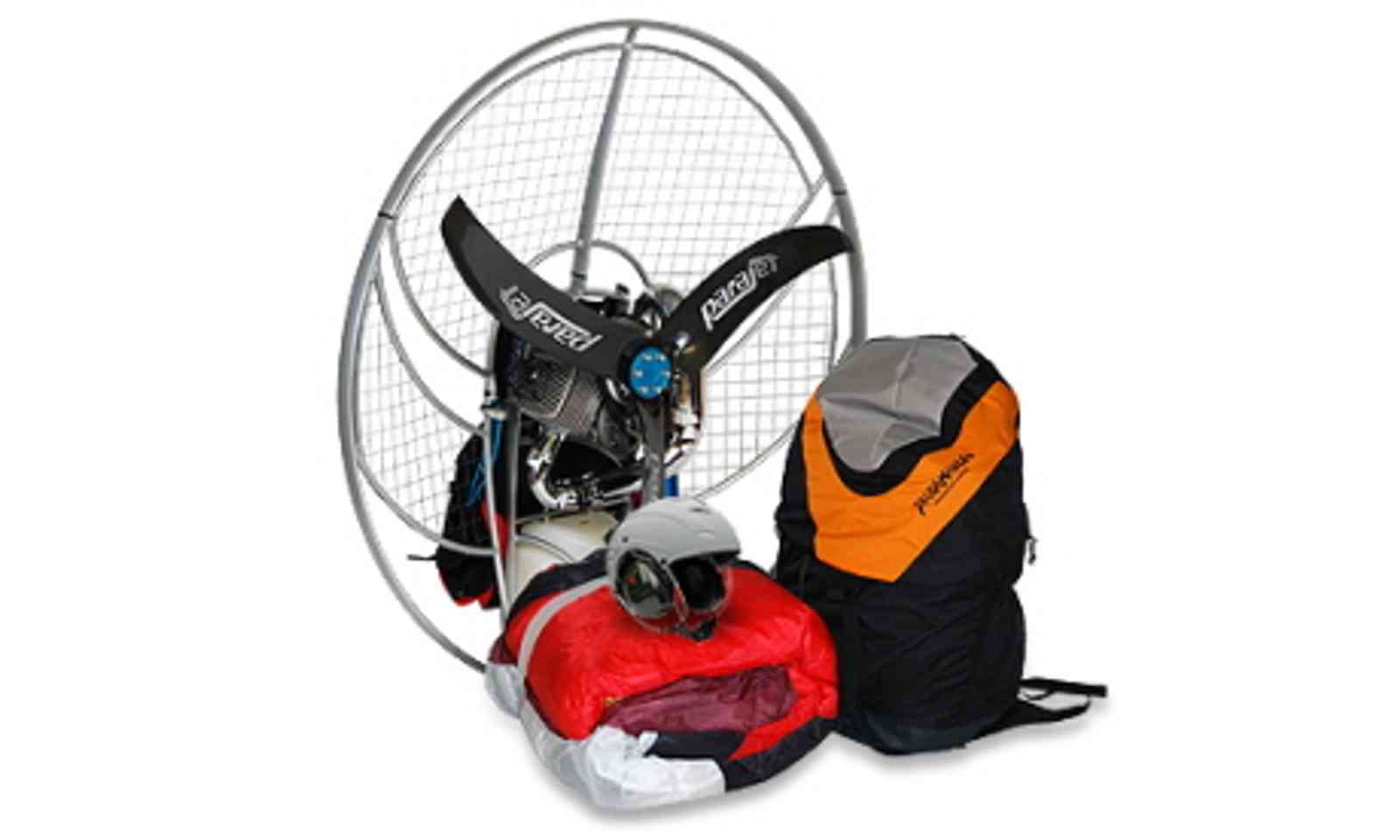 How portable are they? Are they something you could pack into your car boot?

When it comes to practicality, there is no compromise. The Parajet is designed and built to be lightweight, and once dismantled can fit into the boot of a car or large suitcase. This makes a Parajet one of the most compact and transportable aircrafts available. This unique size advantage allows a Parajet to be stored at home with no additional hanger costs associated with traditional aircraft ownership.

How do you hope people will use them? Are they something they could take on holiday to get a different perspective of their destination?

Of course. We have pilots that travel all over the world with our machines and fly in some amazing places that most people rarely have chance to experience. Our company is built on an ethos of ‘Innovation through adventure’ and a paramotor really opens up the opportunity to explore and take in the landscape from a different and exciting perspective. With a Parajet, the sky becomes your playground.

As well as the recreational and sport aspects, we have also spent time looking at how a Parajet can be used for more practical purposes. Traditional manned aircraft used by emergency and security services around the world require substantial up-front capital and have high operational costs. A Parajet offers these services as a more sustainable alternative that delivers affordable acquisition costs with certainty and predictability of operational costs enabling preservation of precious cash reserves and greater flexibility in the current economic climate.

We have already deployed our machines to the Palm Bay Police Department in Florida as part of their Search Operations Aerial Response (SOAR) programme. The Department often get called to look for missing persons or stolen vehicles in the vast countryside surrounding the city. On foot, this can take at least 20 officers a whole day to struggle through the densely vegetated undergrowth.

With the high costs of a helicopter rendering the option unviable, the Parajets have proved themselves an invaluable asset, providing aerial reconnaissance and review of critical situations and scene management. Now seen by the department as a vital part of Palm Bay’s modern approach to policing, the Parajets continue to provide a cost effective aerial capability during police operations.

What are the practicalities of flying one overseas? Do you need a license?

In the majority of countries paramotors are classed under the category of self propelled hang-gliders. Although there are no compulsory pilot licensing requirements in these categories, pilots are still required to comply with aviation regulations and have to be aware of certain operating restrictions that apply to these types of aircraft. These regulations are easily available online or book form and special maps can be purchased to make navigation of restricted areas easier for pilots. We advise all our pilots to contact the country’s civil aviation authority when flying abroad so as to not to fall fowl of these laws and restrictions.

Where can people try paramotoring to decide if it is for them?

For those looking for a fantastic and unforgettable way to safely enter the sport of paramotoring can do so through any number of our associated training instructors, worldwide. Our associated training instructors are independent individuals or training schools and are all highly qualified, experienced and many offer tandem flights or taster lessons and will ensure our potential pilots get the best possible flying experience.

You are a highly respected aviation engineer. Is there anything else on the drawing board?

We have a number of projects in development that I am very excited about. Most recently we have launched the World’s first 700cc rotary powered racing bike that produces 200hp and 100lbs/ft torque and weighs only 136kg. So far the bike has obviously created tremendous interest and our plans are to initially produce a small batch for track days and if everything goes well as regards financing, the hope is then to produce a range of rotary powered road bikes, which we think is very exciting.

Beyond that, we have been developing a very exciting VTOL platform and development of a revolutionary propulsion system.

Parajet offers tailor made training packages and demo flights at locations across the UK and Spain. Training packages start from £795 and inclusive training and purchasing package are available from £7,299. Visit www.parajet.com; call +44(0)1747 830575 or email info@parajet.com to find out more.