Catch up with our virtual reader event: Georgia, USA's undiscovered and unspoilt coast

Missed our Georgia, USA virtual reader event? You can see a full recording and all the highlights here...

For our latest virtual event, we were transported from our living rooms to the stunning beaches, pristine marshlands, and wildlife-filled islands of Georgia’s secret coastline. Stretching from Savannah to Cumberland Island encompassing the Golden Isles, our experts brought this unknown region of the Peach State to life with their expertise and tales of recent first-hand adventures. If you missed the event, don’t worry! We’ve rounded up the highlights for you below, along with a full recording…

How do you reach Georgia from the UK and travel around The Peach State?

Atlanta is Georgia’s major hub. You can fly directly to the city from London Heathrow with Virgin Atlantic, Delta, or British Airways. From here, rent a car and set out to explore the state on a road trip. There’s also the option to take an internal flight to Savannah for a holiday focused on exploring the Georgia coast.

How long does it take to travel around Georgia?

Georgia’s a really diverse state. Home to cosmopolitan Atlanta, historic Savannah, wild mountain landscapes and picturesque beaches, it’s worth allowing at least 7-10 days to travel around The Peach State. Think of Atlanta as your starting point. From here, the North Georgia Mountains are just an hour’s drive north. Alternatively, for a trip to the Georgia coast, your starting point of Savannah lies three hours south-east of Atlanta. From Savannah to St Marys, the drive time is around two hours but exploring the coast is all about taking your time to island hop.

Can you get around Georgia on public transport?

While public transport is readily available in Atlanta and Savannah, it’s not the best way to explore the wider state, much of which is rural. It’s a much better option to hire a car so you can explore Georgia on a road trip. It’s also an option to join an organised group tour. These don’t tend to include the more remote islands along Georgia’s coast but they are likely to feature stops in Savannah and on Jekyll Island.

What is a good itinerary for Georgia?

Fly into Atlanta and spend a couple of days exploring the city before heading north to the mountains. Follow this by journeying south to visit Okefenokee National Wildlife Refuge, North America’s largest blackwater swap which celebrates its 75th anniversary as a park in 2022. The home is a pristine natural wilderness of islands, lakes, jungles, forest, and prairies. Conclude your trip with a stay on the Georgia coast. America As You Like It offer a fabulous ‘Georgia Family Adventure’ itinerary which works whether you’re travelling as a couple, with the kids, or solo. Travel writer Aaron Millar says, “when I visited, I kept thinking it would be brilliant to bring my kids back, so they can learn lots about the eco-systems and wildlife, and go crazy on the beach with no one around.”

Did you come across southern hospitality, Aaron?

Yes. I met lots of people and I always feel it when I go to the south. Sapelo in particular was just one of those places where everywhere I went, people were shaking my hand and inviting me into their homes. Do you have any quick tips on Savannah?

You want at least a couple of days in Savannah, there's a lot to discover there. What I have found they've done so well is protect its culture, history and heritage, with cobblestone streets and beautiful squares, but at the same time developed the modern amenities and luxuries that travellers look for today, with not only accommodations, but with food and entertainment. So now you have the best of both, but you need double the amount of time to see it now.

When is the best time to visit for wildlife?

Spring or summer is a good time to visit. Sea turtles will begin nesting in the middle of May. The bird migrations in eastern America are really quite extraordinary.  Also, if you were come at the end of September or early October, you get to see an array of migrating warblers and shore birds. That’s also when we still have nesting sea turtles emerging, so you get to see the babies coming out and making their way to the ocean.

The skies at night are amazing. At this time of year (December) there’s a variety of meteor showers to enjoy. The cooler temperatures are really nice because there are less bugs, the hiking is magnificent, as well as bicycling. There are fires in the lodge (on Little St. Simons Island), and every Friday evening we have an oyster roast at the lodge for cocktail hour. So, the winter months are just perfectly lovely as well. If we have really cold weather coming in, its only a frontal system that lasts a day or two and then it moves out and the temperature becomes mild again.

Is there a mosquito season to avoid?

Mosquitoes are a function of when we have really big tides and lots of rain. So we can go all summer with no mosquitoes. It’s randomly correlated to tidal amplitude, as well as rainfall events. So if we're having a dry year, it can be fabulous. This is a part of the world where you're either at the table or you're on the table. There's a lot of wildlife that depends on the insects for their food too.

Can you see whales on the coast?

It’s so shallow that you have to go offshore. The North Atlantic Right whale is the most critically endangered species of whale in the world. So there are very strict guidelines on approaching them because the mothers come down to this quiet, shallow coastal region to have their babies in the winter time. We also see the bottlenose dolphin in terms of other marine mammals, and of course manatees, and occasionally we see humpback whales.

What our experts recommend...

Stacia: Those of you who come to coastal Georgia certainly want to experience that magic hour. The light is so luscious and gorgeous. So, my recommendation is to pack a picnic and take yourself to whatever beach you might be near and watch from the crepuscular light to the star-filled sky and enjoy a lovely dinner on the beach.

Cath: Well, mine's the other end of the day. So if you're on a coastal island hopping trip, do your picnic dinner on one island, and then the next morning, wake up on another island, get up early and watch the sunrise on the beach. You can look out across the Atlantic and you cannot see anything else. There's just you, the beach and the sea, that’s it. It’s fantastic.

Mark: Well, we talked about the coast. We talked about Atlanta. I'm going to take you inland to another unspoiled and undiscovered piece of Georgia and that's an area called Lake Okonee. It sits halfway between Atlanta and Augusta, Georgia. About an hour east of Atlanta about three hours from the coast. Lake Okonee is the second largest lake in Georgia and it's surrounded by tall Georgia ponds. There's a beautiful Ritz-Carlton Lodge that sits on the lake. It’s just a really lovely area and I fell in love with it so much that after 25 years of being a Floridian, it made me a Georgian by choice and we made it our home.

Aaron: Savannah. The best restaurant in Savannah is The Grey but you need to book miles in advance, about six months. If you miss your booking, you can occasionally get a seat at the bar.

Sapelo. I stayed in this place called Birdhouse Cottages. It has a beautiful porch looking out over the marsh. Again, watching the sunset and the birds at the end of the day, it’s a stunning place.

Little St. Simons. Make sure you get Stacia as a guide. She's an incredible guide and makes the whole place come alive in a really special way. She can spot just about any bird from a mile away, she’s got an incredible eye.

And then last but not least, Cumberland Island. Rent a bike, take that on the ferry with you so that you can camp on the south and then ride your bike 10 miles up to the north, and then camp in the north there as well.

What motivates you to visit Georgia's coast...

We asked our readers what attracts them to Georgia's special coastline. Here are the results. 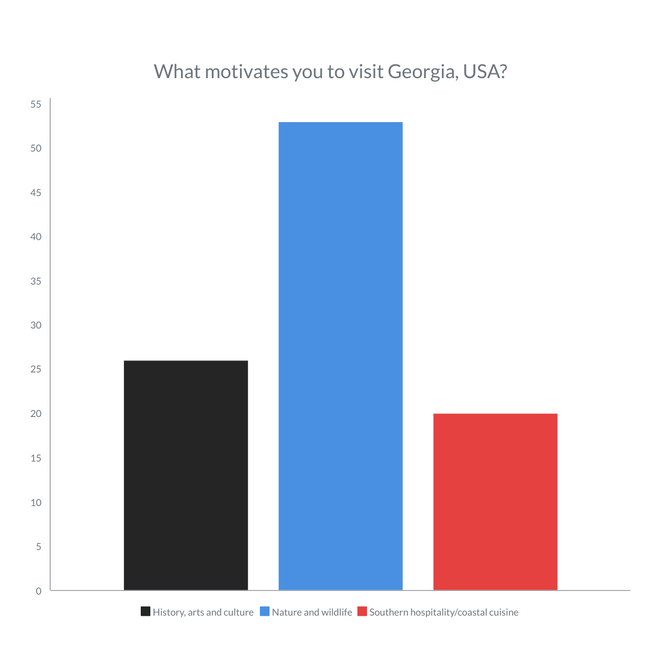 Many thanks for presentation. More places to add to the wish list!

Thank you everyone - wonderful presentations. I can't wait to visit!

Just come back from the USA and loved Savannah, would love to go back.