5 countries every Game Of Thrones fan needs to visit

The eighth and final season of Game Of Thrones returns in June 2019. We take a look at some of its most stunning filming locations, including Spain, Croatia and Iceland... In season seven, winter truly arrived, and the bleak, otherworldly landscapes of Iceland featured extensively. Since season one, Iceland served as the windswept land north of The Wall, and the White Walkers finally made their move.

Previous shoots gravitated around Lake Mývatn and the austere lava fields of Dimmuborgir in the north. The shores of Lake Mývatn have always been a popular camping spot for Wildings and the nearby cave at Grjotagja was where Jon and Ygrette escaped from it all.

The Höfðabrekkuheiði hiking area near Vik, on the island’s south coast, and the Svínafellsjökull glacier, near Skaftafell, are both used for locations beyond the Wall, and you’ll find the pass to the impregnable Eyrie (and Iceland’s National Parliament) in Thingvellir National Park.

Read more about travelling in Iceland Spain has long been a favourite with Game Of Thrones location scouts, and season seven saw the introduction of a whole load of new locations in the country. That rocky beach where Daenerys Targaryen sets foot on Dragonstone in the first episode? That’s Itzurun, near the seaside town of Zumaia, in Guipúzcoa province.

Reports in Spanish newspapers suggest that the otherworldly beaches near Barrika, the islet of San Juan de Gaztelugatxe and the port of Bermeo featured too. Seville’s Royal Dockyards and Alcazar (pictured) also featured, as characters on the show ventured forth into Sunspear, the Dorne capital.

Fans of the Dothraki should head to the badlands near Bardenas Reales, in southeast Navarre, (the Dothraki Sea of season six) and Almeria in the south, a.k.a. Vaes Dothrak. And don't miss Girona in Catalonia, which served as Braavos and Old Town.

Check out the Wanderlust Guide to the best of Spain With much of the filming done in the gigantic Paint Hall studios in Belfast (the largest in Europe and where the RMS Titanic was built), it should come as no surprise that the countryside of Northern Ireland is called upon when a quick exterior shot or two are needed.

County Antrim, is particularly popular, with the small town of Ballintoy standing in as the Iron Isles capital, Pyke, and the Dark Hedges, an avenue of beech trees planted by the Stuart family in the 18th century, appearing as King’s Road, the main thoroughfare leading into King’s Landing.

Elsewhere, you can search for direwolves in Tollymore Forest Park and keep an eye out for Melisandre’s murderous shadow baby in the Cushendun Caves. 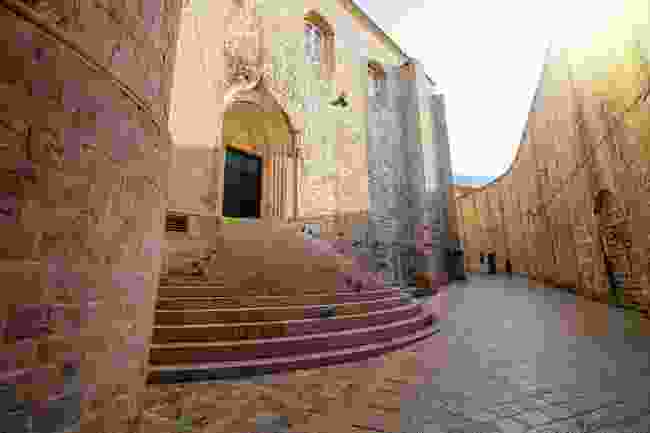 Thrones producers have said that as soon as they set their eyes on Dubrovnik they knew that they had found their King’s Landing. The UNESCO-listed city doesn’t really need any more tourists, but the numerous companies offering Game Of Thrones tours are more than happy to take your money.

Many of the series’ most iconic scenes have been shot here. The Purple Wedding Feast in season four was shot in Gradac Park. The trial by combat between Oberyn Martell and Gregor Clegane was held in the Belvedere Atrium. Most of the scheming and much of the plotting is done on the picturesque city walls. The local tourist board has produced a handy map of Game of Thrones locations to help you see them all.

Further up the Dalmatian coast, you’ll want to visit Split, which appears on the show as Meereen. Diocletian’s Palace here served as Daenerys’ throne room. The Fortress of Klis, a medieval fortress built in the rock near Split, appears in exterior shots of Meereen and Sibenik, while Kastel Gomilica were used as exteriors of Braavos. You might recognise the latter as the place where Arya Stark made a bit of cash selling oysters. Before the producers decamped to Dubrovnik, the Maltese city of Mdina served as King’s Landing and Valletta stood in for The Seven Kingdom’s sunnier locations like the Dothraki Sea. Fort Ricasoli was used as the exterior of The Red Keep in King’s Landing.

Rumour has it that producers upset the Maltese government when they covered the garden in Saint Dominic’s Priory in hessian to make it look more like a desert location.

Sadly, another Maltese star of Game Of Thrones is no longer with us. The Azure Window, a rock arch off the coast of Gozo and scene of the wedding feast of Daenerys and Drogo in season one, has since collapsed into the sea.