France’s little visited regions – and why you should visit them

Great food, a rich history and a distinct lack of crowds. They may be France’s least visited regions but there are still plenty of reasons to explore these forgotten gems 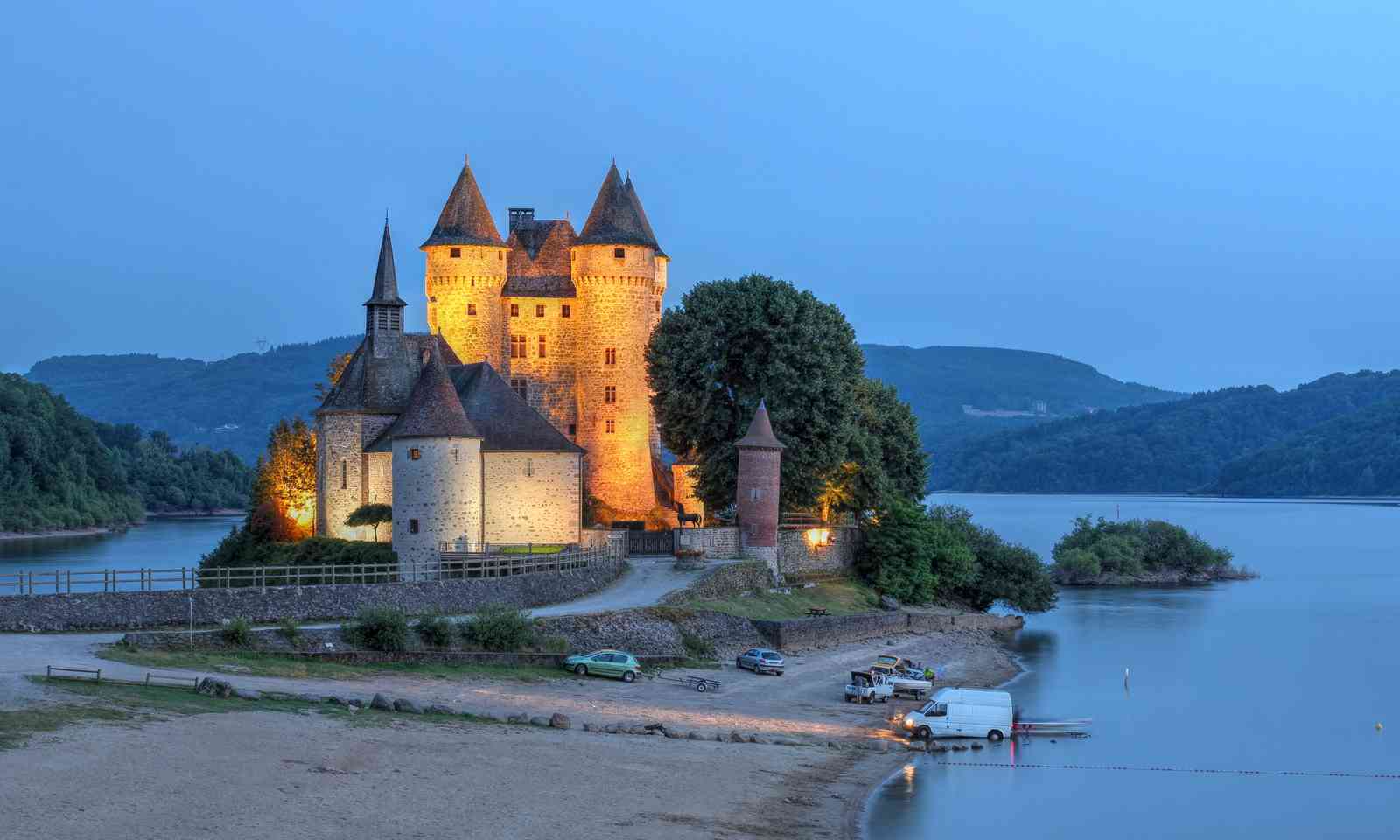 Where: North-western corner of the Massif Central in southern France.

Why: A land of mountains, valleys and lakes, dotted with medieval villages, castles and Romanesque churches, Limousin is a beguiling mix of nature and art.

Eat: Chestnuts. They are a Limousin staple used in soups, salads and stews. Make sure you try the local delicacy Boudin aux châtaignes, a black pudding with chestnuts.

Drink: Limousin cider, pressed fresh at the local region certified orchards. The local chestnut and fruit liquors are worth seeking out as well.

- Crozant, in the Creuse Valley, a popular hangout for the Impressionists.

- The National Museum of Porcelain in Limoges, home to over 10,000 pieces from all over the world.

- The wildlife research centre in Monts de Gueret, where visitors can observe wolves in their natural habitat.

- The annual Chestnut Fair in Dournazac.

- Collonges-la-Rouge, one of the most beautiful villages in France. Where: Along the border with Belgium in north-east France.

Why: Home to the world’s most famous fizzy drink, Champagne-Ardennes is a land of rolling hills, vast lakes and medieval capitals that once ruled over France. The opportunities to sample the local tipple are endless, including the world’s first tree-top champagne bar.

Eat: Champagne-Ardennes is a land of potatoes, cabbage and beetroot, vegetables that are difficult to grow in the south of France. Cold meats (Charcuterie) are popular too. This being France and the home of Champagne, these simple ingredients are transformed into sophisticated and delicious dishes. Try the Art-Deco Café du Palais in Reims for a taster menu of the best the region has to offer.

Drink: Head to the chalk cellars of the world’s most prestigious champagne houses in Reims and Epernay. Dom Perignon, Veuve Clicquot, Taittinger, Pommery and Moët & Chandon all offer cellar tours followed by a champagne tasting.

- Medieval Troyes, capital of the ancient Province of Champagne and cradle of the Knights Templar.

- The vast flocks of Common Crane that descend on Lac du Der and lakes of the Forêt d’Orient en route to wintering sites in Spain.

- Notre-Dame Cathedral in Reims, coronation site of the kings of France for more than 800 years. 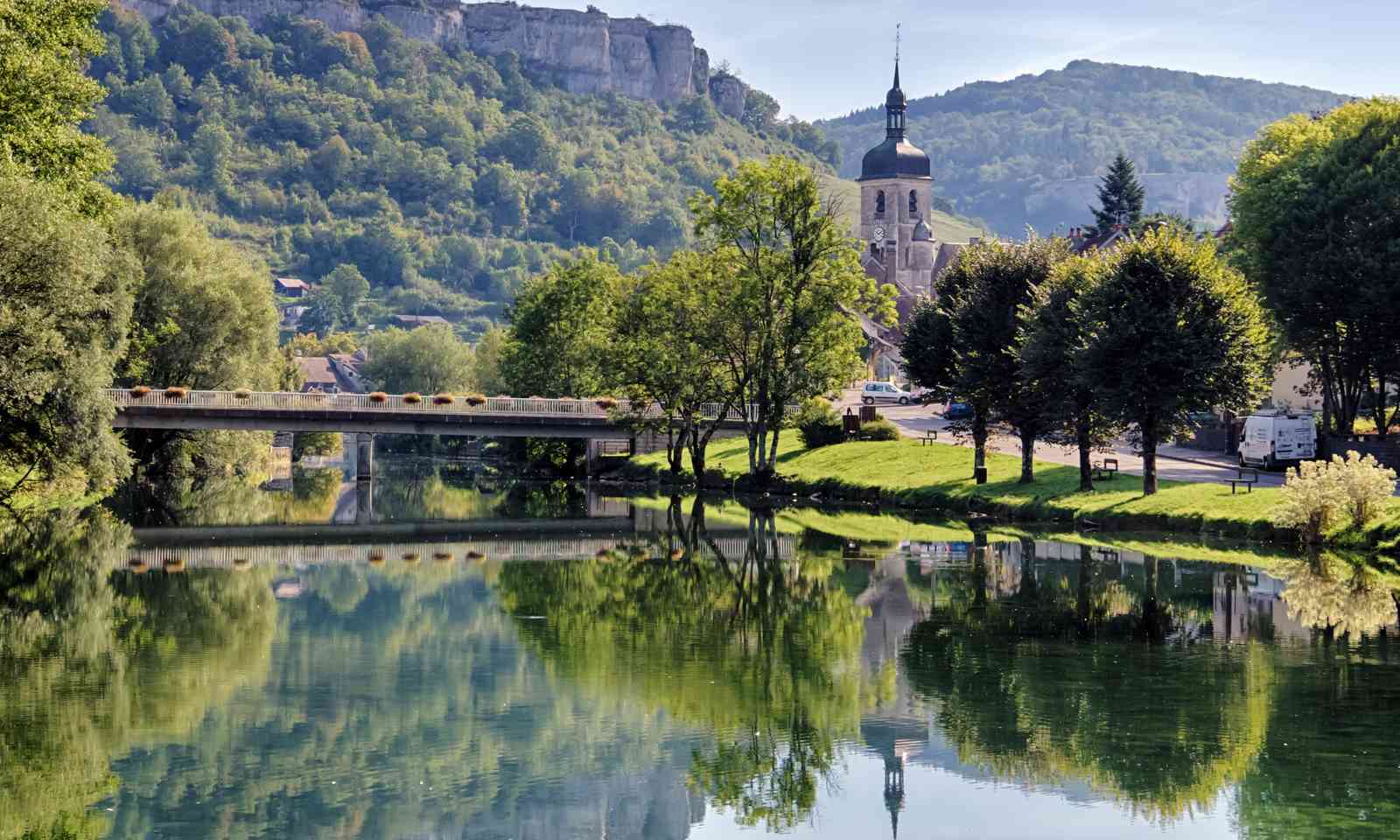 Where: Stretching along the Swiss border, Franche-Comte is France’s easternmost province.

Why: A little bit of Switzerland in France, where the landscapes are epic, the food rich and delicious, and the locals said to be a little friendlier than the rest of France.

- The ancient capital of Besançon, mentioned by Julius Caesar and home to the UNESCO-listed Besançon Citadel.

- The indigo waters of Lac de Chilean, perfect for swimming, canoeing and fishing.

- The medieval fortress of Fort Joux, standing guard over the Cluse de Pontarlier pass, high in the Jura Mountains.

- Ornans, the picturesque river-side village described as the Venice of France.

- The hiking trails in Jura National Park – the Swiss Alps, without the altitude or attitude. 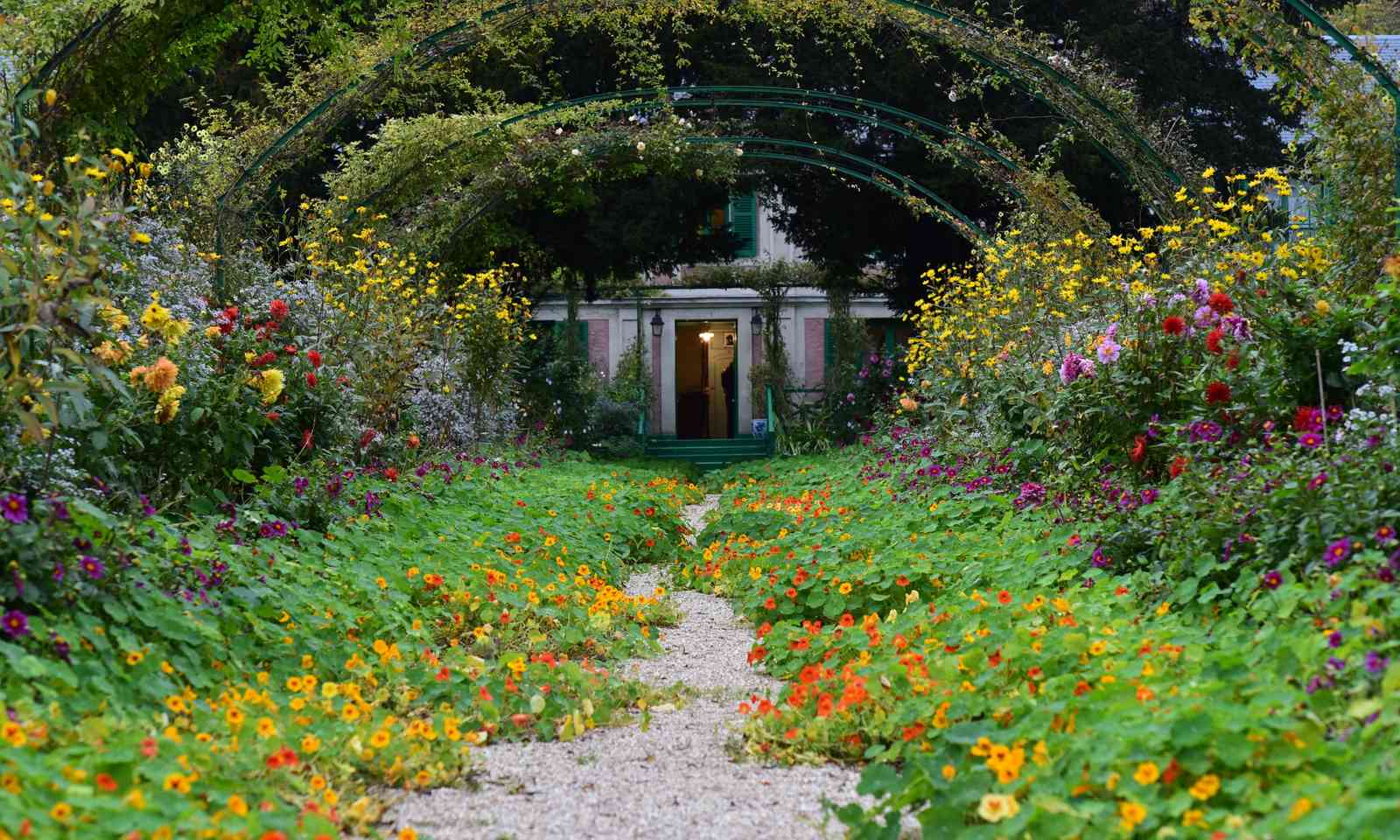 Where: The upper part of the recently reunited Normandy, the bit everyone drives through to get further south.

Why: In their rush to head south, many visitors drive straight through this part of Normandy, meaning you get to enjoy the historic buildings, rolling countryside and perfectly chilled cider in relative peace.

Eat: Like the rest of Normandy, fresh fish and shellfish are staples here, with most dishes coming with a generous dollop or cream and butter. The regional cheese is Neufchate, a creamy Camembert-style cheese. The cheese is made in the shape of a heart, a legacy from the 100 Years War, when local maidens gave them to English soldiers.

Drink: This part of France is famous for not producing wine. Instead, local orchard farmers have turned their hand to cider. Ask for yours to be served ice cold. Calvados, an apple brandy enjoyed by Charlemagne, is popular too. Often doused on ice cream, it can also be drunk ‘Le Trou Normand’, as a palate cleanser between dishes.

- Rouen, a lively, historic city where Joan of Arc met her untimely end.

- Giverney, the small town where Monet lived and painted. His famous waterlily series was inspired by the ponds he dug in his garden himself.

- The long sandy beaches, backed by a chalk cliff coastline, near Étretat.

- The atmospheric ruins of Jumièges, a Benedictine Abbey wrecked during the French Revolution. 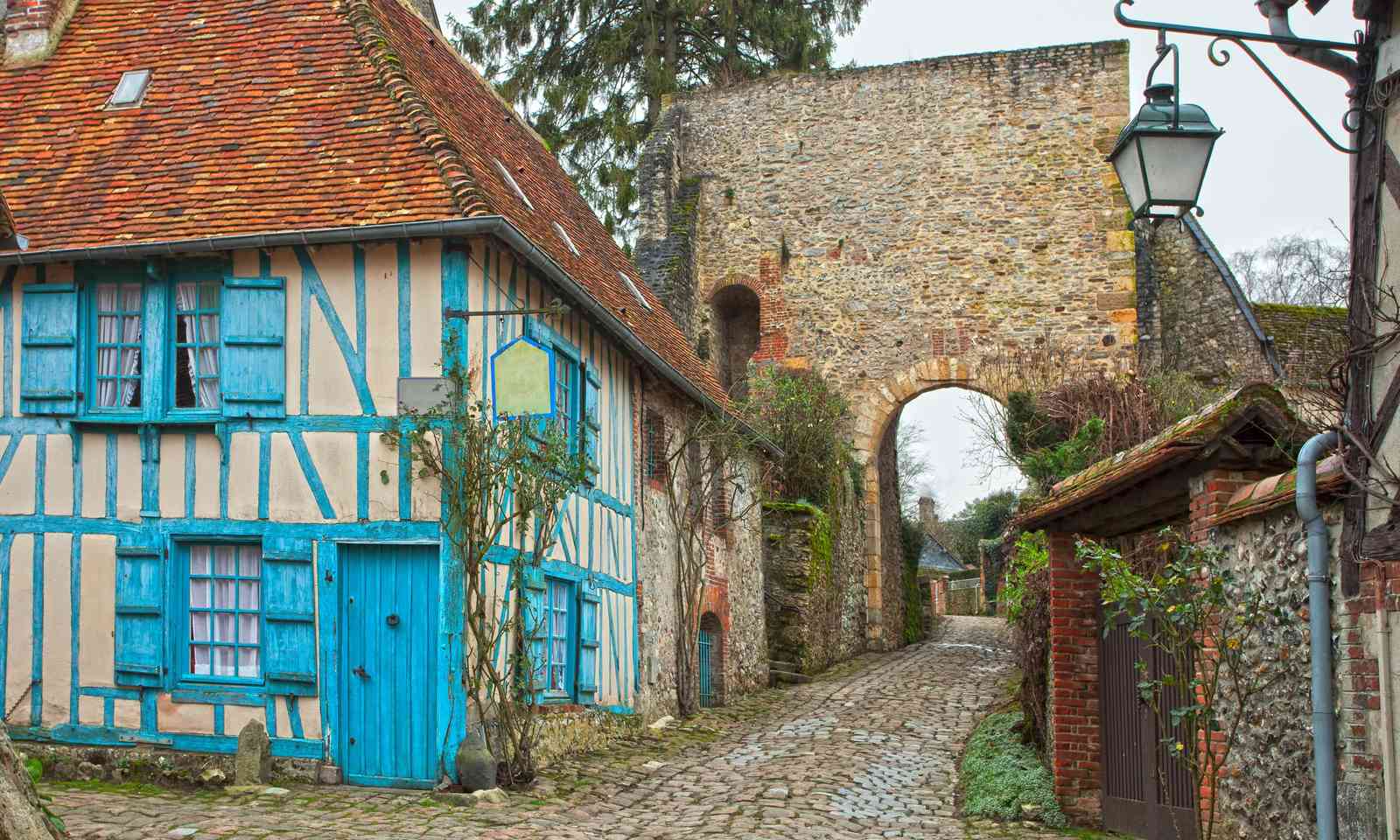 Where: Directly north of Paris, about an hours drive from the capital.

Why: Picardie is a land of fairy tale towns, imposing chateaus and sombre war memorials. With over 200 miles of inland waterways and nearly a fifth of its surface covered with forests, it is also home to some of France’s best nature reserves.

Eat: Picardie is a region known for its hearty food. Tuck into Ficelle picarde, crepes filled with ham, grated cheese and mushroom sauce, covered in crème fraîche and baked in the oven. Alternatively, try a leek pie called flamiche or agneau de pré salé, meat from the sheep that graze around the Bay of the Somme. Le pâté de canard is a speciality of Amiens, dating back to 1643.

As for dessert, make sure it is smothered in Chantilly cream, invented in the Chateau de Chantilly. Consider it over a slice of Dessert de Napoleon, a pineapple cake knocked up by local chef’s for the general when he passed through.

Drink: Ten percent of the world’s champagne is made in the south of the Aisne department in Picardie. The locals also like their cider, especially the pear cider from Bray. If you’re feeling brave, try grénette, a local liquor made from oak leaf.

- Gerberoy, claimed by many to be the prettiest village in France.

- The Somme Bay, a huge estuary that drains into the English Channel and home to harbour seals, salt-meadow sheep, wigeon, shelducks, curlews and oyster catchers.

- The Somme Battlefields and the Circuit of Remembrance, a sombre reminder of the horrors suffered here.

- The Museum of Barbarian Times, housed in an old mill in Moulin de Marle, and a recreation of  life in the time of the Merovingians.