Irish journalist Rosita Boland visited Pakistan long before it landed on most travel radars. She reveals what it is about Pakistan that captured her heart. And why it will capture yours, too...

Many years ago, I spent a month in Pakistan. Mostly up north, along the Karakoram Highway, and in Baltistan, where a cluster of the highest mountains in the world are.

There weren’t many other visitors around when I was there. I was always the only westerner on the local bus, and usually the sole woman, too. Sometimes it was lonely, but the memory of the time I had there is as vivid and extraordinary as when I experienced it.

The scenery is breathtaking. Its grandeur is staggering. But my strongest and most abiding memories are of the people and the surreal situations I found myself in. Of course, that is the joy of travel. And it proved to be the joy of travelling in Pakistan.

Here are some of my best stories...

1. Sleeping on a table on the Karakoram Highway 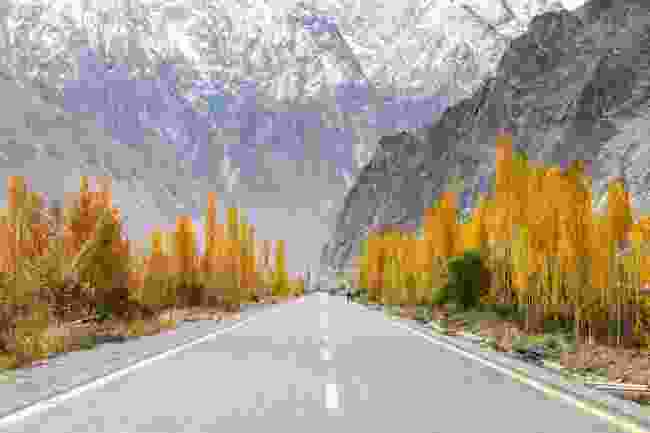 Depending on which unreliable map I was looking at, I was somewhere between 40 and 60 miles between Gilgit and Karimabad, further up the Karakoram Highway.

I wanted a break from the overloaded local bus, with bald tyres and erratic drivers. My last driver had smoked weed most of the journey from Islamabad to Gilgit; a journey of 14 hours on mountain roads.

So, I decided to walk to Karimabad, The thing is, I wasn’t quite certain if there were places to stay along the way, in the villages of Rahimabad and Nilt.

I inquired in the bazaar in Gilgit and was told there was a hotel in Rahimbad; a village that my guidebook did not have an entry for. And that there was a government rest house in Nilt.

It was a magnificent, if intermittently terrifying, walk. On one side of the road, a vertical mountain face, and further up, loose stones and packed snow, that I knew often came rushing downwards and forcing the closure of the road for days at a time. On the other, a sheer drop to the Hunza river. 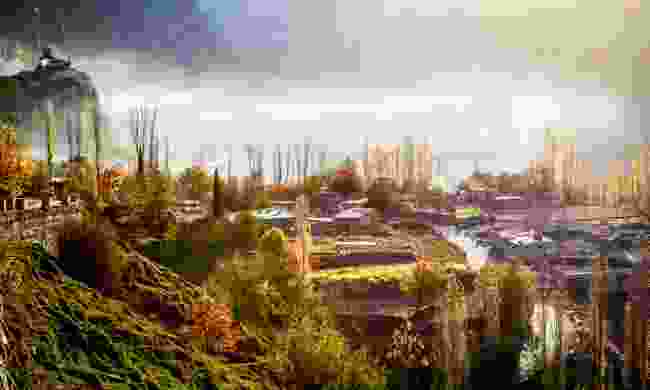 Karimabad did indeed have a building with a sign outside that said Hotel, but it was not a hotel as I knew it.

It was a single cavernous room with a corrugated tin roof, where about 20 Pakistani men were watching cricket on the television powered by a generator, drinking chai. They turned to stare. The owner spoke English.

“I was wondering if I could have a room for the night?”

“Oh no, Madame, there are no rooms here,” he said.

We stared at each other. The one daily bus from Gilgit had long since passed me out on the road. It would soon be dark.

“Madame!” He said. “Madame, you can sleep here if you wish. When the restaurant closes. I will allow.”

I was confused. So it was a hotel after all? He waved a languid hand in the direction of the back of the room. Where chairs were stacked up against the wall.

When darkness fell soon after 6pm, the generator was unplugged, and everyone departed. The owner told me he would back at 6am, gave me a candle and matches, and locked me in before I had realised what was happening. I arranged a row of chairs against the back wall, put my head under my daypack, and slept.

The next night was not much different, Nilt had indeed once had a Government Rest House, but it was now the office of the local engineer.

His office only had one chair. But it had a large wooden table. On which I spent the night, just grateful that things had worked out somehow.

2. Wandering through the ruined Raja Palace in Khaplu 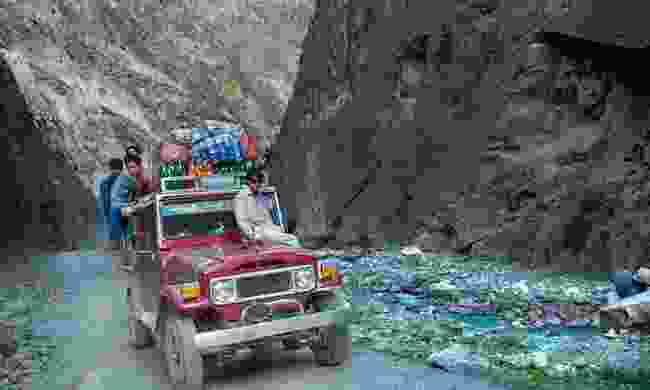 I took a seat in a cargo jeep from Skardu, the main town in Baltistan, to the village of Khaplu. According to the ancient register in the Khapulu Inn, I was the first Irish tourist ever to stay there.

There was a halo of apricot blossoms around every tree. The vertical landscape rose all around. The river was jade-coloured, and there were yak heads nailed above most lintels. 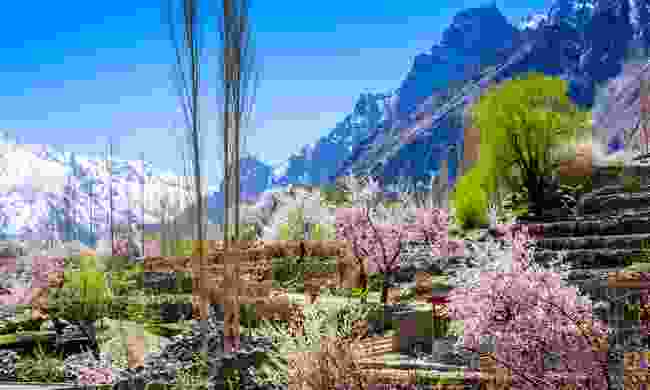 There had once been a royal residence in this village; the Raja’s palace. When I was in Baltistan, it had been empty for five years. It was the tallest building in the village, and by far the most impressive. A child who said the Raja had been his great uncle ran to a house and came back with a key.

The key opened the door that led into a vast courtyard. There were rooms over four floors, and some doors were open; others locked. I peered through a crack in one immense carved wooden door and gasped.

It had the same kind of wooden carvings on the ceiling as the houseboats in Shringar had; that I had only seen in pictures. There were elaborately carved doorways, ceilings with hand-painted flowers, wooden latticework over the windows, all of them framing the most extravagant views of mountain and scree and sky. In one room, there was an abandoned suitcase. In the kitchen, cauldrons rusted. 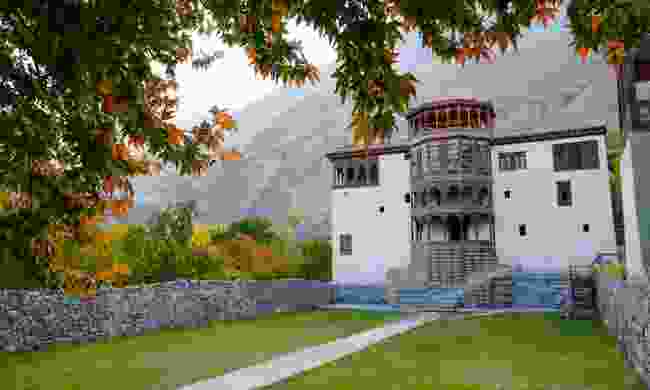 I wrote in my diary that evening: “In five more years, the place will have lost its roof and in 10 years, there will be no wooden doors, no carved windows, no decorated ceilings and no mouldings left.

“In 20 years, it will be a ruin. The clock will not be turned back. It’s travelling back in time, unmaking itself as steadily as it was made.” 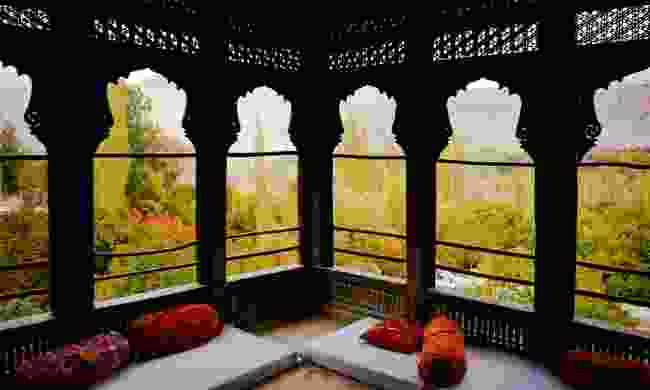 But I was wrong. For the first time since I left Pakistan, I just googled the Raja Palace in Khapulu. It was renovated by the Aga Khan Trust for Culture, and it is now a luxury hotel with 21 rooms. I stared at the pictures, trying to remember the place I saw on my visit all those years ago.

I recognised the carved wooden balconies, although whether they were the originals I saw, or reproductions, I don’t know. There wasn’t even a restaurant in Khapulu when I was there: you ate in your guesthouse.

I’m glad it hasn’t fallen down, and I’m also glad I saw it when I did.

3. Trying to leave Pakistan for Zahedan in Iran by train 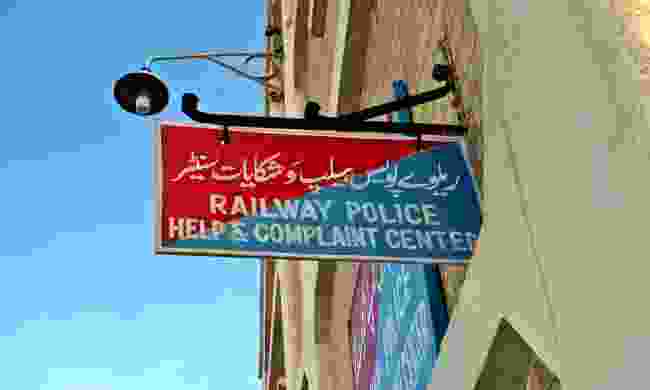 My last stop in Pakistan before crossing the border into Iran was Quetta. The day after getting to Quetta, I went to the train station to buy a ticket for the train that ran once a week; a journey of 28 hours.

I had already survived more than 48 hours on the train that runs from Rawalpindi to Quetta, so this much shorter trip was meant to be a relative breeze.

My surreal conversations at Quetta railway station, like something from a Samuel Beckett play, proved otherwise. 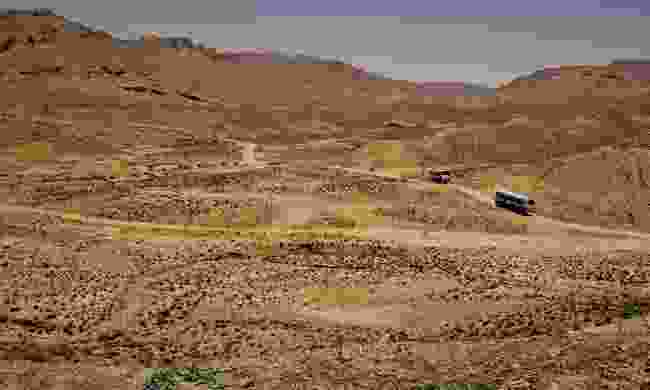 A bus heading out of Quetta (Shutterstock)

These are the people I asked for information about the train to Zahedan:

These were the reasons they gave me for the once-a-week train being cancelled:

I decided to buy a bus ticket instead.

4. Discovering I came from a country that didn’t exist 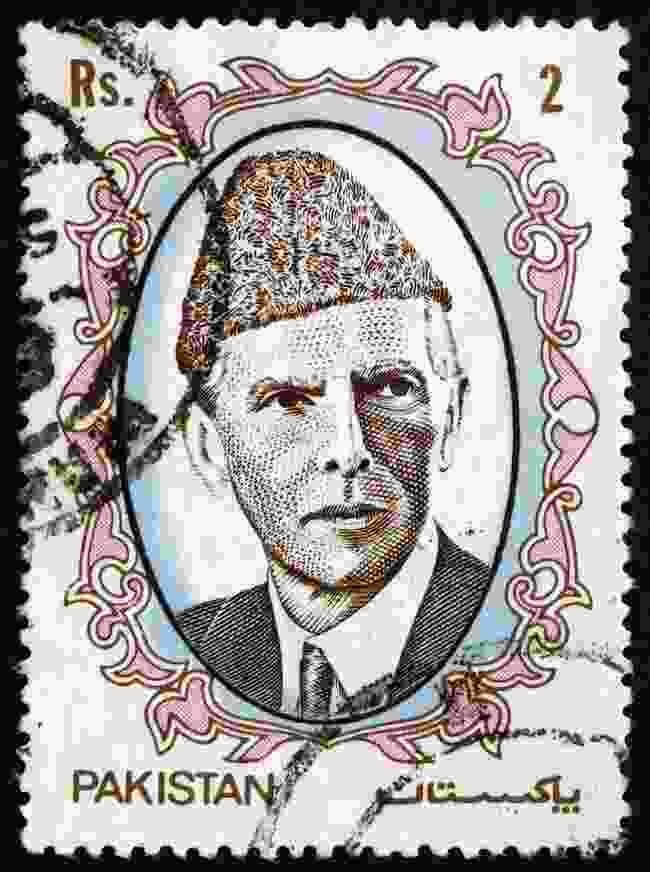 When I travelled through Pakistan I was always writing letters. On that eight-month journey, I picked up letters along the way at various American Express offices, who held them as a poste restante service.

My last mail drop had been in Delhi. There would not be in any in Pakistan, and of course, American Express was not present in Iran.

But I continued to write letters and send them off from whatever places I found myself in, all the while hoping that there would be a veritable mountain of correspondence awaiting me in Istanbul, several weeks hence.

In Karimabad, a tiny village in northern Pakistan, I took my letters to the village post office. There was a pot of glue on the counter: neither the locally-bought envelopes nor stamps had glue on them. I duly glued the envelope flaps closed, and then asked for stamps.

Some letters were going to England. I pasted the stamps onto them.

“And three to Ireland, please,” I asked next, showing him the Irish-addressed envelopes.

“Ireland?” The clerk repeated, frowning down at the addresses.

“I am not knowing this country,” he declared firmly, shaking his head.

I stared at him. I could see a copy of the Pakistani Postal Workers Handbook on a shelf behind him. “Can you please look in your handbook?” I asked.

The book had a list of countries with their associated postal rates. He searched through it while I waited. “Madame, I cannot find this country,” he said eventually. “Is not on my list, therefore cannot be sending letters there!”

It is such a surreal experience to be told that your country does not exist. What do you say? Especially to someone who has already told you they have never heard of your country, and appears to have consulted an official document to back this up? I wanted to laugh. I also wanted to post my letters. 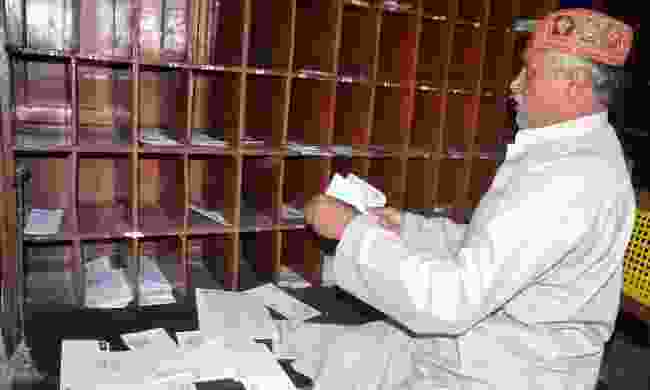 A postman in Pakistan (Shutterstock)

The clerk passed the handbook over to me, so I could look for myself. I searched through it. I looked for “Ireland”, “Republic of Ireland” and even “Eire”, but the name of my home country was nowhere to be found. “It’s not there,” I said with disbelief.

“You see!” He said with triumph. “This Ireland is not on my list!” He pushed the Irish-addressed letter back across the counter to me, still minus stamps.

“But I want to send them,” I persisted, pushing them back at him. “I know they’ll get there. Honestly, there really is an Ireland.” It was one of the most bizarre conversations of my life.

The clerk had not heard of Ireland, but he volunteered the information that he had heard of a country called Holland. “Perhaps,” he offered, “you could send these letters to Holland. I am knowing the rates for Holland.”

What he meant was, he would put stamps at Holland rates on my Irish-addressed envelopes. I briefly fretted that someone, somewhere else in Pakistan, would notice that my envelopes were not carrying the correct postage rate, and thus take them out of the postal system.

I had spent a lot of time writing those letters. They were good letters, and I wanted them to reach their Irish destinations. Then I realised I was being far too literal. If the postal clerk himself in Karimabad was signing off my letters at a rate that might or might not be correct, it was extremely unlikely anyone else further down the process was going to notice.

“OK,” I said. And so, my letters to Ireland, a country that didn’t officially exist in 1995 in the mountains of northern Pakistan, were finally posted.

Fortunately, every single one of those letters arrived. 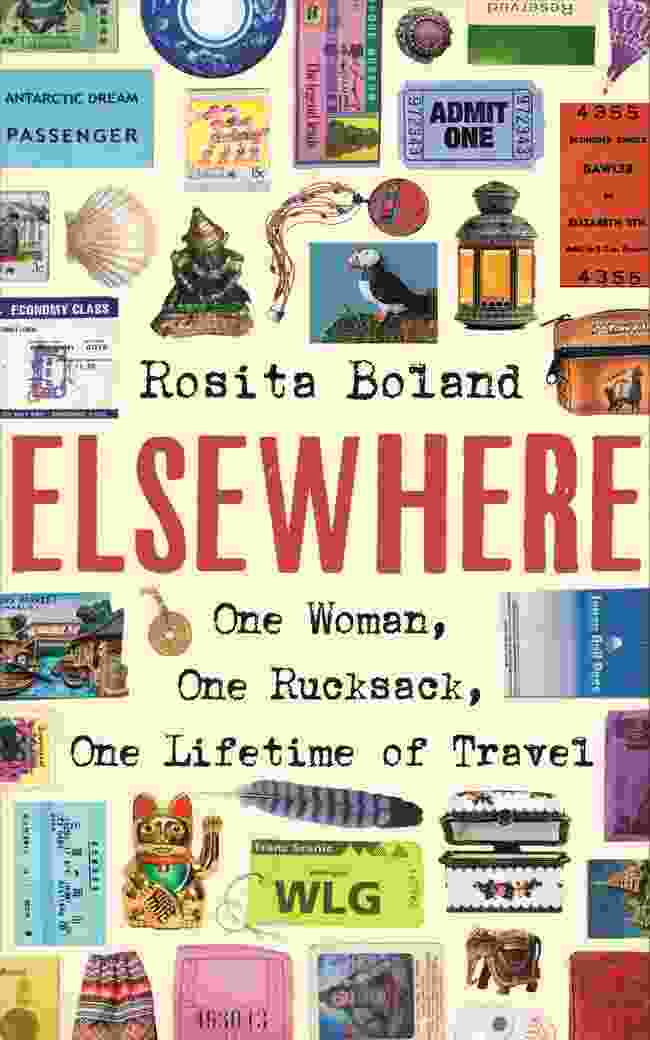 Rosita Boland is a senior features writer at the Irish Times, specialising in human interest stories.

Her new book, Elsewhere: One Woman, One Rucksack, One Lifetime of Travel is published by Doubleday Ireland and is available on Amazon now.

How to get off the beaten track

7 amazing trips to the unlikeliest of destinations